T.I.M.E Stories is a bloody hard game to review. That’s not because it’s incredibly complicated or even because it is fairly unique, but more so because it’s just so packed with spoilers. I’m not usually squeamish about such matters when it comes to board games but that’s because more often than not, the story can be found in the first few pages of the manual and any genuinely surprising content comes inside a tiny sealed envelope.

T.I.M.E Stories on the other hand must be reviewed in two halves, the first of those being the game itself, which merely provides a structure for game play and the second, the single adventure that is included in the box for use within that structure. Essentially, T.I.M.E Stories is a pseudo role playing game that is absolutely at its best when played by exactly four players, with a rapidly diminishing return when three, two or even one player is involved. Whilst there is one adventure included in the box, the game is deliberately designed to accommodate expansions and there are already a number of those to choose from. 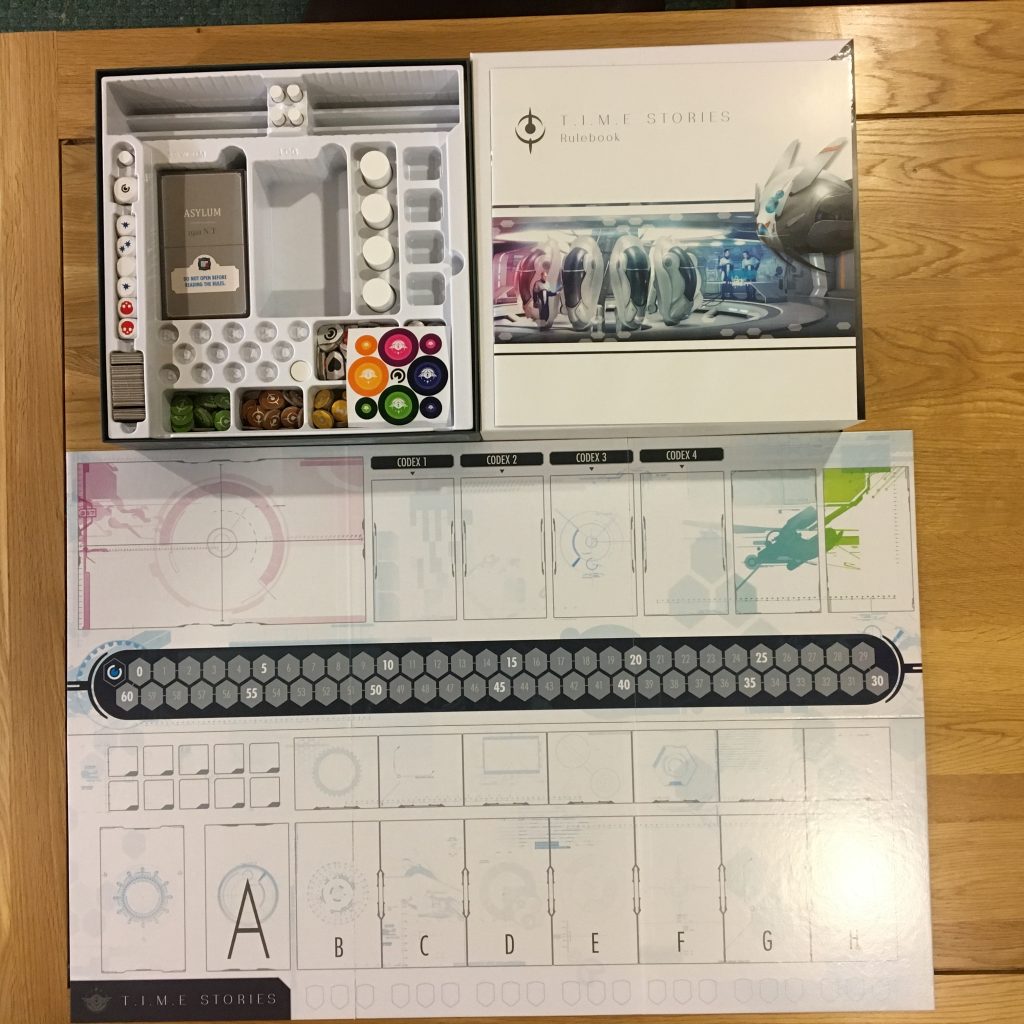 The way T.I.M.E Stories works at a mechanic level is kind of thematic in the same way as an Assassins Creed is, which is to say that it isn’t, but it is at least a concept that will make complete sense. Players are Time Agents working for an agency and each adventure pack is basically set in some other time or place, which is where the real flavour comes from. The base game includes a scenario based on an asylum and there are already expansions based on zombie outbreaks, Game of Thrones themed fantasy, film-noire and several others.

The game board is built from the deck of cards that comprise each adventure, with a number of them laid out on the spaces marked A to H, as indicated by the top card in that subset. Most adventures begin with the assignment of characters (known as vessels) to each player, as well as the creation of an initial map that is placed into the top left corner of the board to provide a navigational aid. The game includes both large and small pawns for each player to indicate their location in the game and there are a large variety of tokens that indicate different things in different games – those related to interacting with enemies and other hazards, those that indicate that a certain key is being held and so on.

Every adventure uses a time track (the grey numbers in the middle of the board) to indicate how long players have to complete whatever mission they are undertaking. One thing I love about T.I.M.E Stories is that when a player dies in the game, their pawn is simply placed seven time units further down the track, meaning that they will respawn if the rest of the team can stay in the game (and assuming that there is sufficient time left.) When it comes to playing the game, players simply place their pawns next to the cards (in locations A to H) and pay a time unit for each move. When they reveal the card they have chosen to investigate, they will read it (to themselves) and resolve it if necessary using a system of dice checks against fighting ability, wits, stealth or whatever, depending on the particular adventure in play. 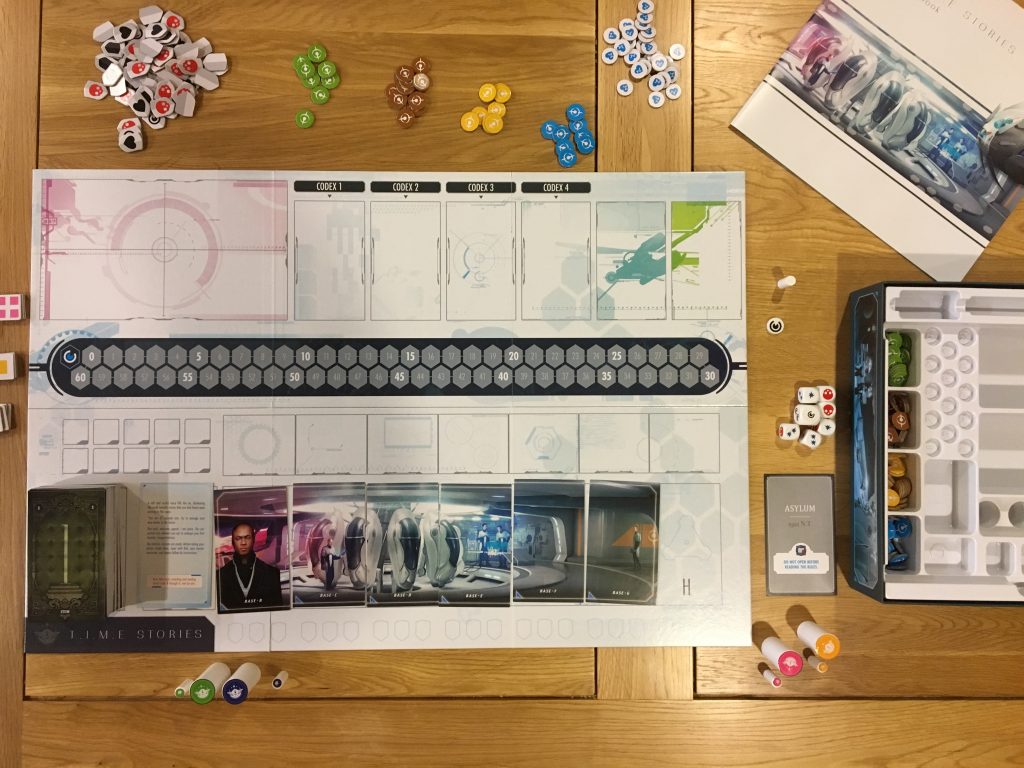 Successfully resolving these tests will enable players to progress the story by gaining in game items and revealing new locations. This will often result in searching through the face down deck for the relevant codex, which may then be laid out across A to H, with the outgoing codex being gathered up and stored in a dedicated area of the board. This approach is quite novel and really handy, with the generic template that T.I.M.E Stories is built around actually doing the job better than I think many more bespoke game boards can achieve. It’s really very clever.

Another interesting feature of T.I.M.E Stories is that whilst you will probably only want to complete each adventure once, you’re unlikely to actually achieve that in your first, second or even third playthrough. In fact the bundled scenario took me four attempts to complete, but it could easily have been five had things gone differently towards the end. Whilst you do carry knowledge from one game to the next (and I believe that there are some persistent features in some scenarios) there are still many branching situations in each adventure. It’s a bit like a choose your own adventure wherein you will take a wrong turn at some point, but you never quite know whether it was just the last choice that got you killed, or actually a much bigger error several turns before. Thankfully, I haven’t encountered any unfair instant death situations yet and I hope I never do.

One thing I don’t really like is the way that certain skill test failures don’t really penalise the player. Combat will always result in health loss if you can’t defeat your opponent (and health loss leads to death) but failing to pick a lock, for example, will only rarely result in a flavoursome and challenging twist of events. Rather than an orderly spotting you, chasing you down and forcing a fight, you’ll more often than not simply have to spend another unit of time on the next turn to try again…. And possibly again. It’s a fairly minor gripe, but it felt to me as if it might have been nice to include a relevant “consequence” for each kind of failed test in each different scenario, for example. 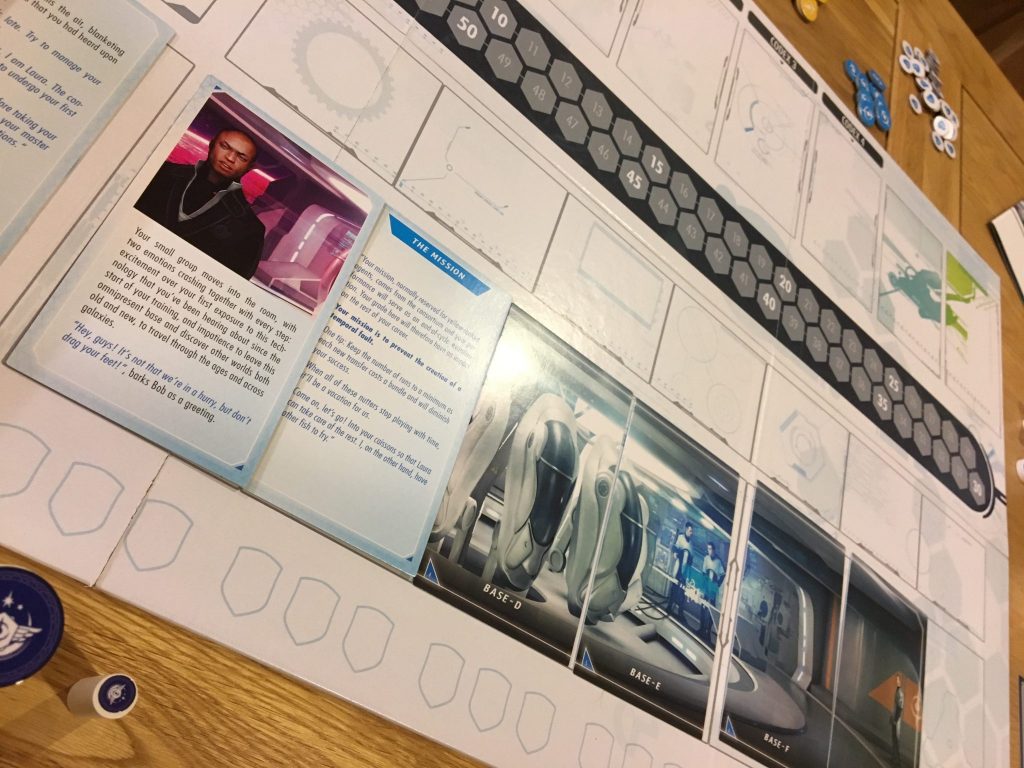 Regardless of the criticisms that might be levelled at it – the minor game play gripe I’ve just outlined, the fact that each scenario is only good for about three to five two hour long games, the fact that there is only one in the box and that it really is specifically a four player game, T.I.M.E Stories is remarkably good fun. It’s very simple to teach and if you’re willing to make the investment, you’ll surely find a scenario for almost anyone. It is also made to a very high standard – these pictures show only the card backs and it really is amazing to see how different the artwork is in each adventure and how nicely it brings the situation to life.

I feel like T.I.M.E Stories is more often than not a game for teenage to adult players and whilst it isn’t a gateway game, it feels like one you can play with non-hardcore friends in a fairly casual setting. It is inclusive, entirely cooperative and  if everyone gets bored halfway through a session, the box is one of the best I’ve seen for storing a game in progress with every single component accounted for. If you’re looking for a decent, structured role player (without actually telling anyone that is what they are doing) that has the flexibility to accommodate any scenario, then T.I.M.E Stories may be for you.

A copy of T.I.M.E Stories was provided for review purposes and can be purchased via 365 Games or through one of the shops found in this handy Store Locator.