Road Rash consumed a lot of my time back when, as a younger man, I was able to get over to my friend’s house to play it on his Mega Drive. The thrill of racing across a desert on a motorbike all while ruining other rider’s days —and skulls— with iron pipes, bats, and the (over-powered) chain-flail to battle your way to first place was addictive to my 8-year-old self.

Sequels came and went, with the series getting as far as its sixth instalment: Road Rash: Jailbreak in 2000 before the genre of motorbike-face-beating-racing dwindled and shuffled off into the dark, pixelated night.

Cue Road Redemption, blasting out of Early Access 17 years later on a motorbike engulfed in flames, clutching a sword in one hand and sticky bomb in the other, all accompanied by a ridiculously over the top metal soundtrack screaming “violent racing is BACK”.

First Kickstarted back in 2013, it secured just under $174,000 to fund development. A year later it rampaged through Steam Greenlight and onto Early Access, allowing the community, and Road Rash fans, to help shape the game into a worthy spiritual successor to the cult classic, culminating in the final release version four gruelling years later. 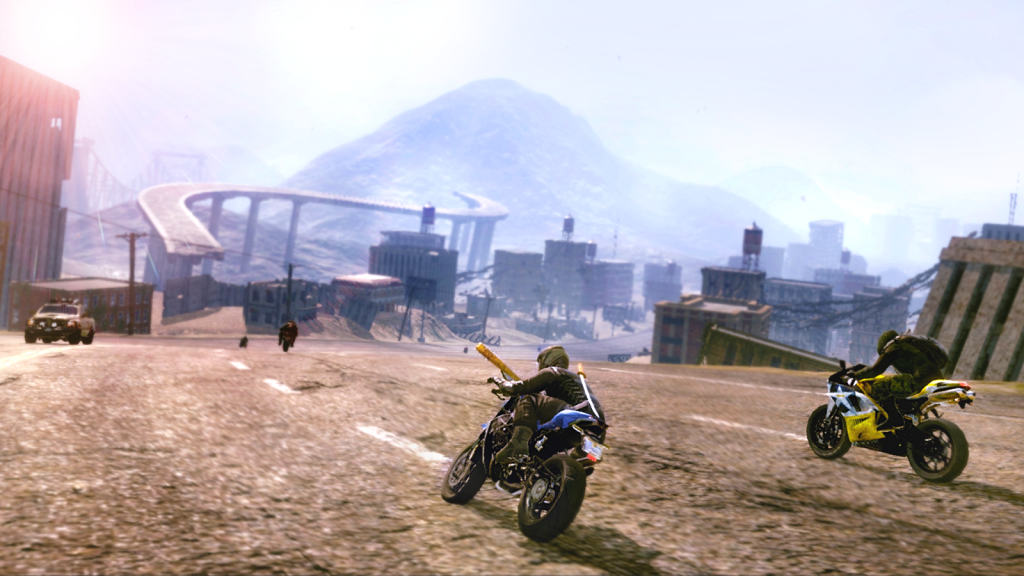 The game’s main focus is on its campaign mode, which has a rather weak plot about post-apocalypse biker gangs, an assassin, and everyone along with their leather-wearing, spike-adorned grandmothers chasing said assassin down for an oversized bounty. What they hope to spend the money on in this crumbling and decaying wasteland is a mystery, presumably there are still Sears and McDonalds around after the calamity to invest radiated dollars in. You can largely ignore the thin plot and the not-so-great voice acting (is that guy Australian? ..is that supposed to be Scottish?) and use it as an excuse to bash faces in and perform violent road rage.

The mechanics are fairly simple, but can be combined to produce some very satisfying outcomes: you are armed with multiple weapons, and can swing them haphazardly left or right to the dismay of whoever happens to be occupying those spaces — knocking off helmets and forcibly removing people from their beloved motorised steeds. You can also kick, which is effective when a truck is coming the opposite direction, or you are near a steep cliff with no barriers, as luckily for you, OSHA didn’t survive the blasts. Other riders will of course be trying to do all of the above back at you, so with careful timing you can parry attacks and grab ahold of other riders, either preventing them from escaping an inevitable demise, or smashing their face into their dashboard with a satisfying thud and subsequent dismount.

This leads to later levels with more adept AI turning into wonderful, high-speed displays of violent dancing with parries, kicks and flails being thrown, all whilst avoiding traffic, bridges, scenery, and each other. 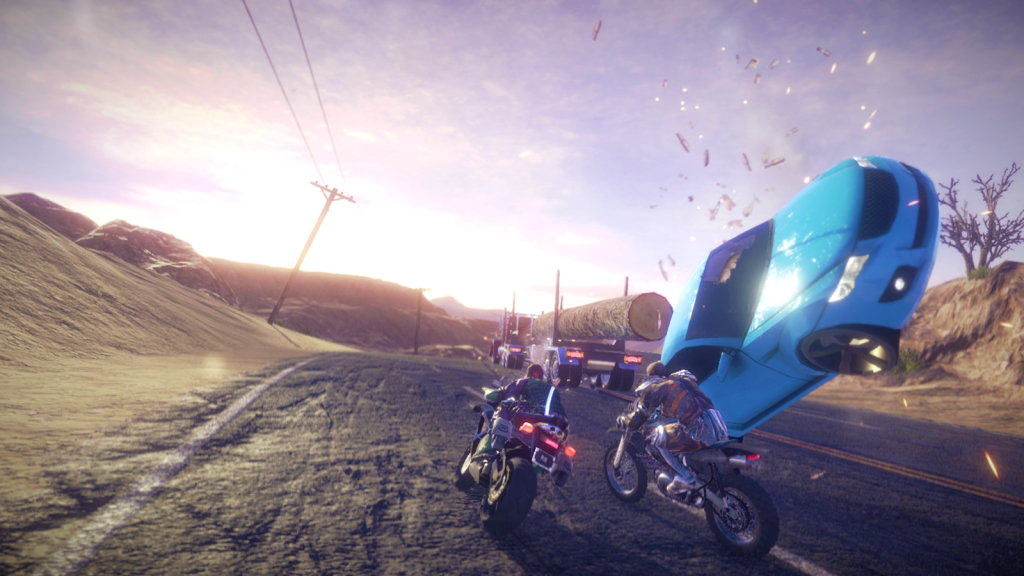 In the campaign mode, you have one “life” and a bunch of health: each time you get knocked off your bike, fall off a cliff or get whacked in the head, you lose health. Each “level” requires you to complete an objective: either ensure you come at least third, actually race against the clock, or introduce a certain number of bikers to the cruel, unforgiving asphalt. When you finish a level, you earn cash which you can use to upgrade weapons, replenish health or give yourself buffs.

There are a lot of levels, and if you die you go all the way back to the beginning but with the consolation prize of unlocking a permanent upgrade — should you have accrued enough points in that run. Presumably, the more you play (and die) the better your character gets unlocks-wise, and the further you can go before succumbing to the inevitable march of death.

Aside from the campaign, Pixel Dash and EQ deliver on one of their more prominent Kickstarter pledges by launching with a full suite of multiplayer available: internet, local LAN and split screen. So you can kick your friends into the paths of oncoming Mad Max-style trucks, or work together to irritate the supposedly-Scottish, biker gang boss in any way you like.

There are gripes with the game, however. The tracks in each section feel repetitive after a while despite being randomly generated; there is always the long bridge, the tunnel and the cliff, no matter what. The bikers all do the same telemetry of attacks and moves — whilst making you feel like a badass biker warrior, it can become pretty tiresome to go through the motions of swing, parry, catch up to the next guy and repeat for the next hour. 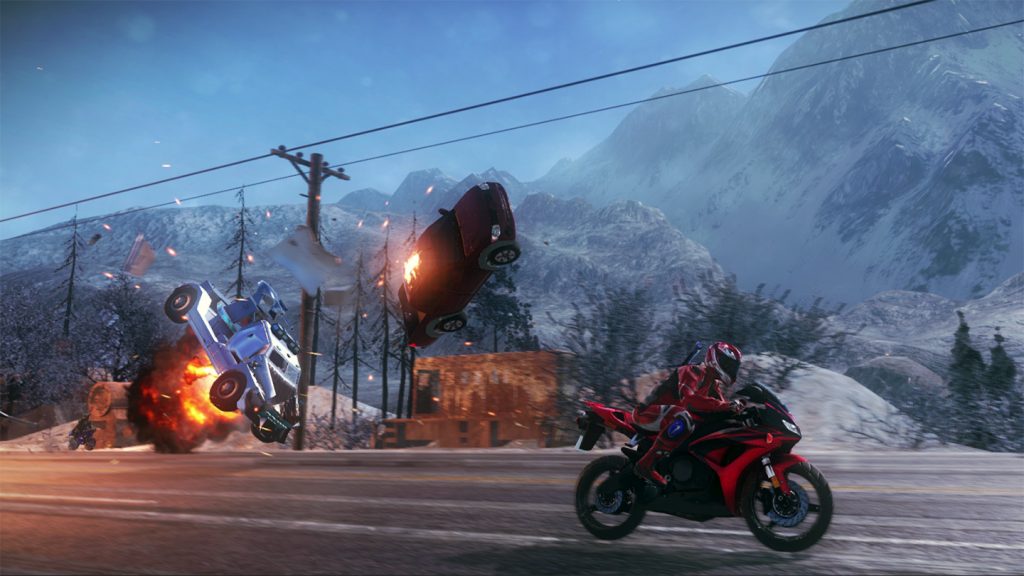 For a game focused almost entirely on it, the driving often feels light and awkward, with your turning speed always being slightly too slow for the curvature of the roads, forcing you to perform handbrake maneuvers on every other bend. This would be fine, but the handbrake is so sharp that you often wind up falling off the other side of the road before you can react.

As the game aims to deliver high-speed, high-octane vehicular combat as much as possible, there should be very little down time —if any— before you can get back into the action. However, a slight graze of a fence, bump of a car, or swerving off the road causes you to stop entirely. This, coupled with the collision detection preventing you from jamming the gas and sliding off the side of obstacles, you have to awkwardly back up and slowly rejoin the road, which breaks the feeling of “awesome sword-wielding bike badass” quite regularly.

Despite these issues, the game is an adrenaline filled blast, fun to play both alone and with friends. The pace, music and mechanics produce a wonderful choreography of violent, bike-based combat which deserves to be called a spiritual successor to Road Rash: that steadfast, retro racer which still occupies a special, brutal place in many a heart.

If you’ve been hoping for a Road Rash fix, then this is definitely worth your time.