World of Warcraft: Wrath of the Lich King: A Pandemic System Game — Catchy!

I have to admit that when I first saw the previous World of Warcraft branded take on a thematic board game (Small World of Warcraft) I was pretty dubious. Somehow though, the Warcraft theme really enhanced the base game and I really enjoyed it. Pandemic, on the other hand, has already been reskinned in many forms, so it might be more challenging for World of Warcraft: Wrath of the Lich King: a Pandemic System Game to show us something new.

To be honest, it makes a good first impression. With a slightly deeper box than other games in the series to hold a large number of plastic miniatures, it’s obvious that the intended market for World of Warcraft: Wrath of the Lich King is slightly different to base Pandemic, which uses cubes and pawns instead. Returning players will also notice that there is only one “colour” of enemy here (rather than three different coloured viruses) and this is a nod to one of several streamlining mechanisms. 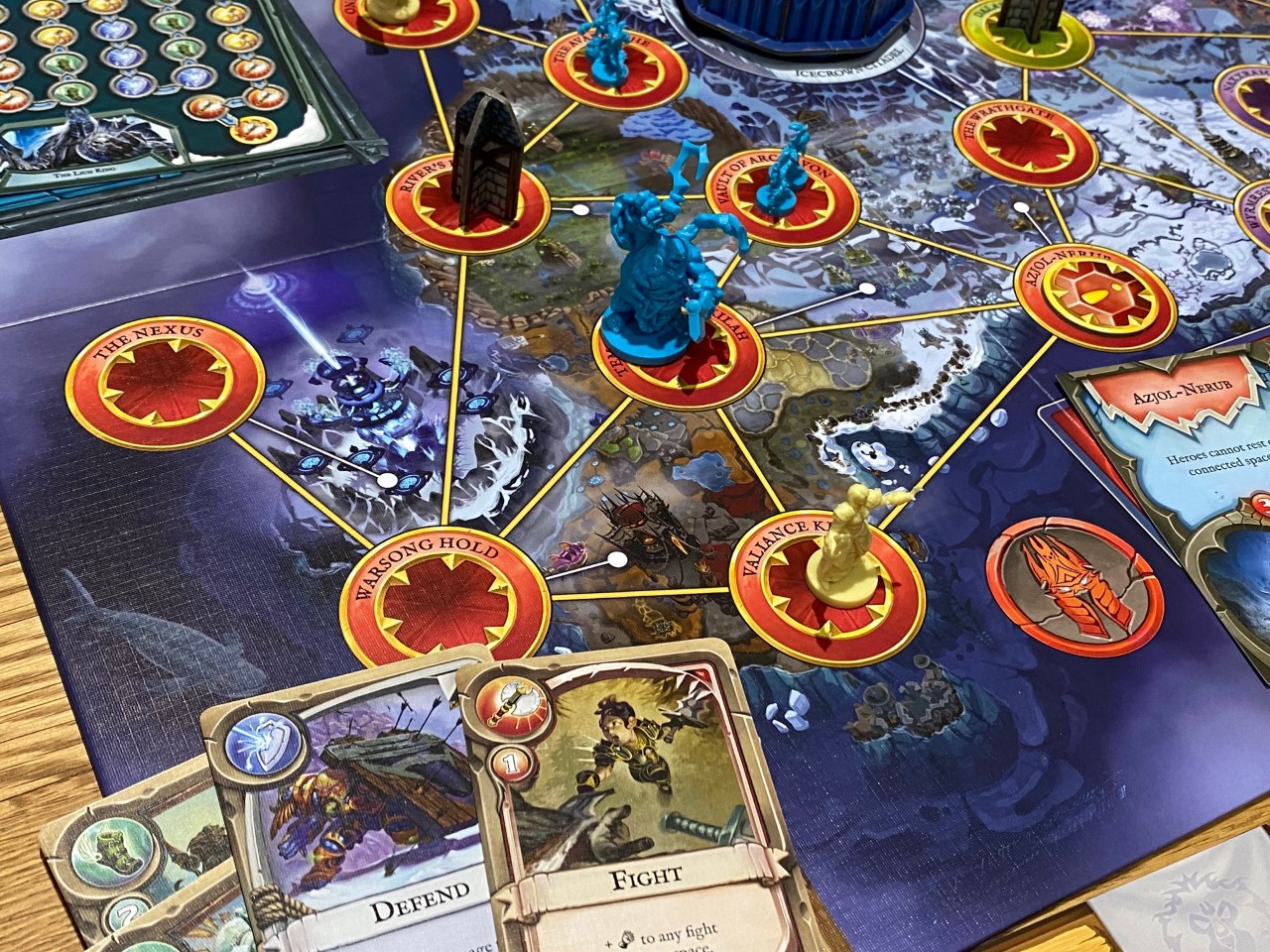 There are some other unique oddities that really pique the players’ interest elsewhere, as well. For example, three decks of quest cards and a deck of rewards will feature, whilst the second kind of enemy — the Abomination — is represented by larger miniatures. The Lich King himself — Arthos — is also represented by a large model, and his Icecrown Citadel stands tall above the board to coax players towards a final battle.

World of Warcraft: Wrath of the Lich King supports both proper solo play with its own ruleset (rather than the classic “just play both characters” approach) and cooperative gameplay for up to four players. In any case, players will use between two and four heroes chosen from a selection of six, each of which has both its own variable health gauge as well as both passive and active heroic abilities. 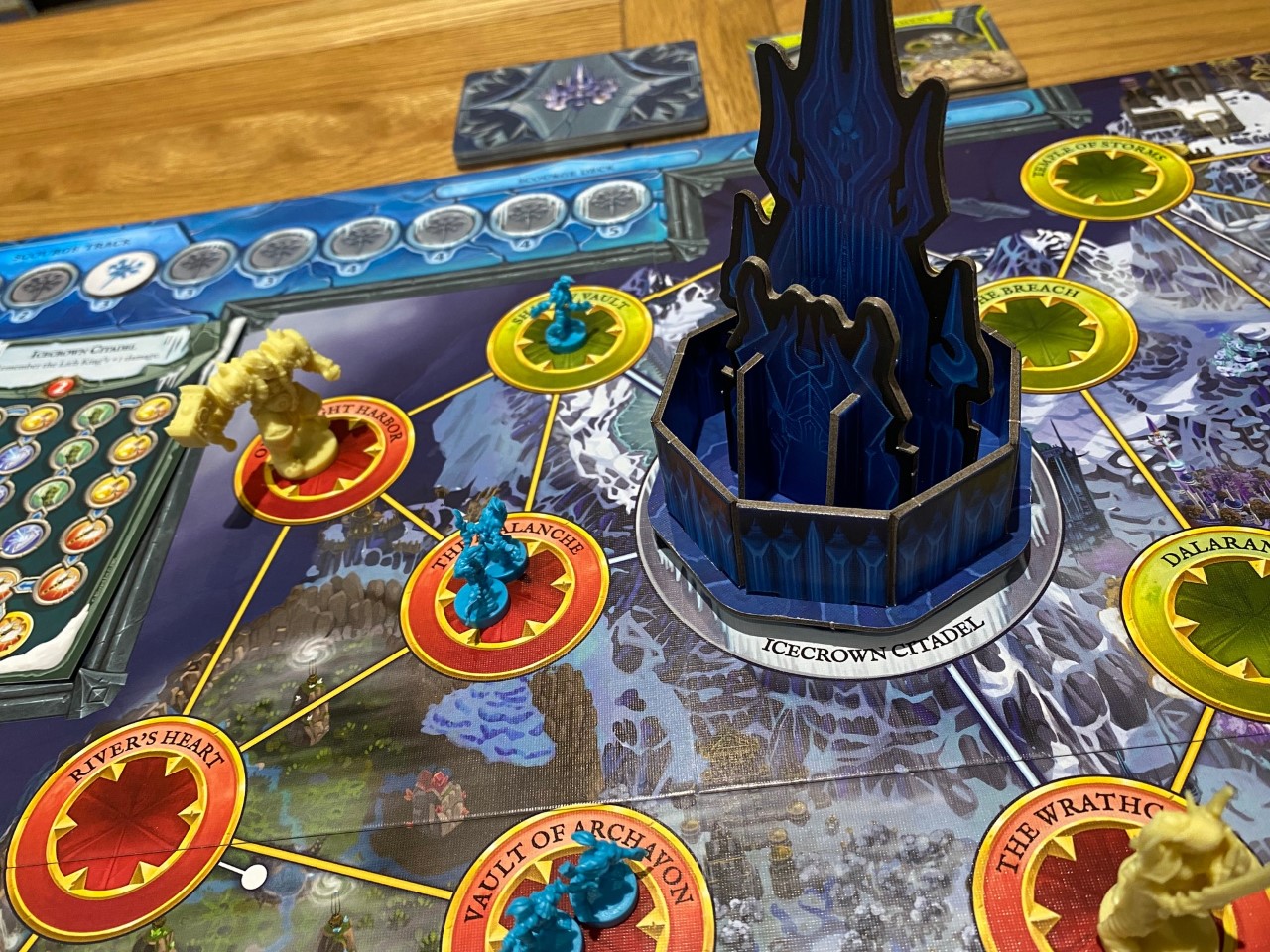 Another feature that takes World of Warcraft: Wrath of the Lich King towards a more straightforward, video game style of play is the inclusion of dice, which are used to resolve both combat encounters and quests. Dice show successes (fists), misses (shields) or combinations of both, and in general you’ll want to roll successes to defeat enemies — although shields will nullify damage dealt in return by either quests, monsters or the presence of the Lich King in your region (he adds one damage to any combat or quest).

Having spoken about quests a few times, I should mention that these are the core method by which progress is made in World of Warcraft: Wrath of the Lich King. In effect, the players must resolve a quest in each of the three regions of the game, and to do so, they will go to the active quest space and roll dice to advance a track. A player can also spend cards from their hand to advance even further, and any other character on the same space can add one card (even if it is not their turn) to assist. 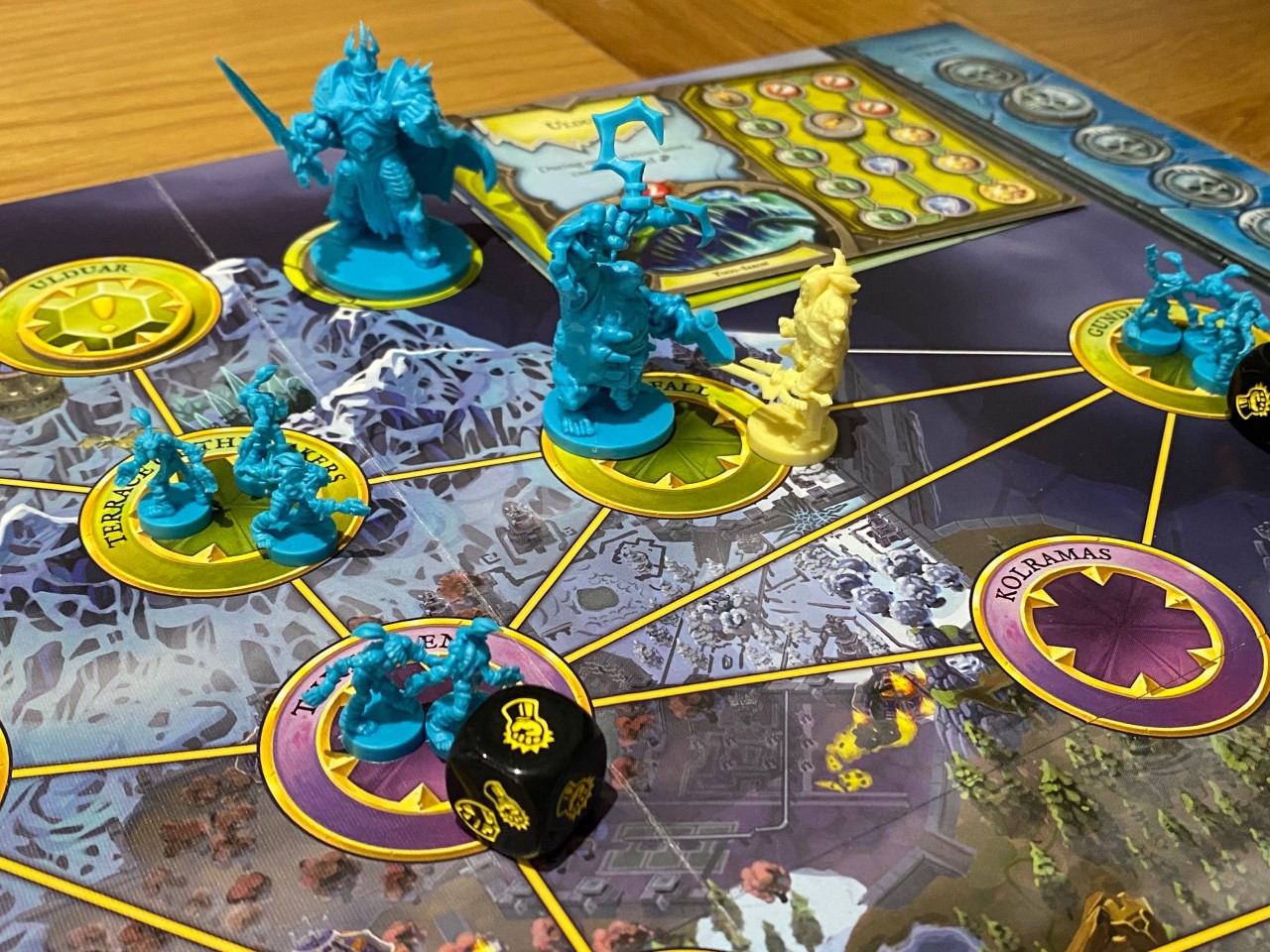 A quest will then deal damage back to the player who is activating it — usually representing the fact that the quest itself depicts an epic battle with a named opponent, or the completion of some equally epic endeavour. If a player completes a quest, they remove it from the board and take the reward card underneath it. Rewards offer powerful, often permanent effects which frequently break the normal rules — for example allowing the player to take an additional action on their turn.

When I talk about spending cards, I should just elaborate on that for a moment. Each player will have a deck of hero cards that serve two purposes. Firstly, cards can be spent as I’ve just described — to advance quests — which is done by matching the symbols on the hero cards to those on the quest track. The other use is to enhance normal actions (or provide additional actions) such as enhancing attack or defense, provide healing, or allow faster movement. 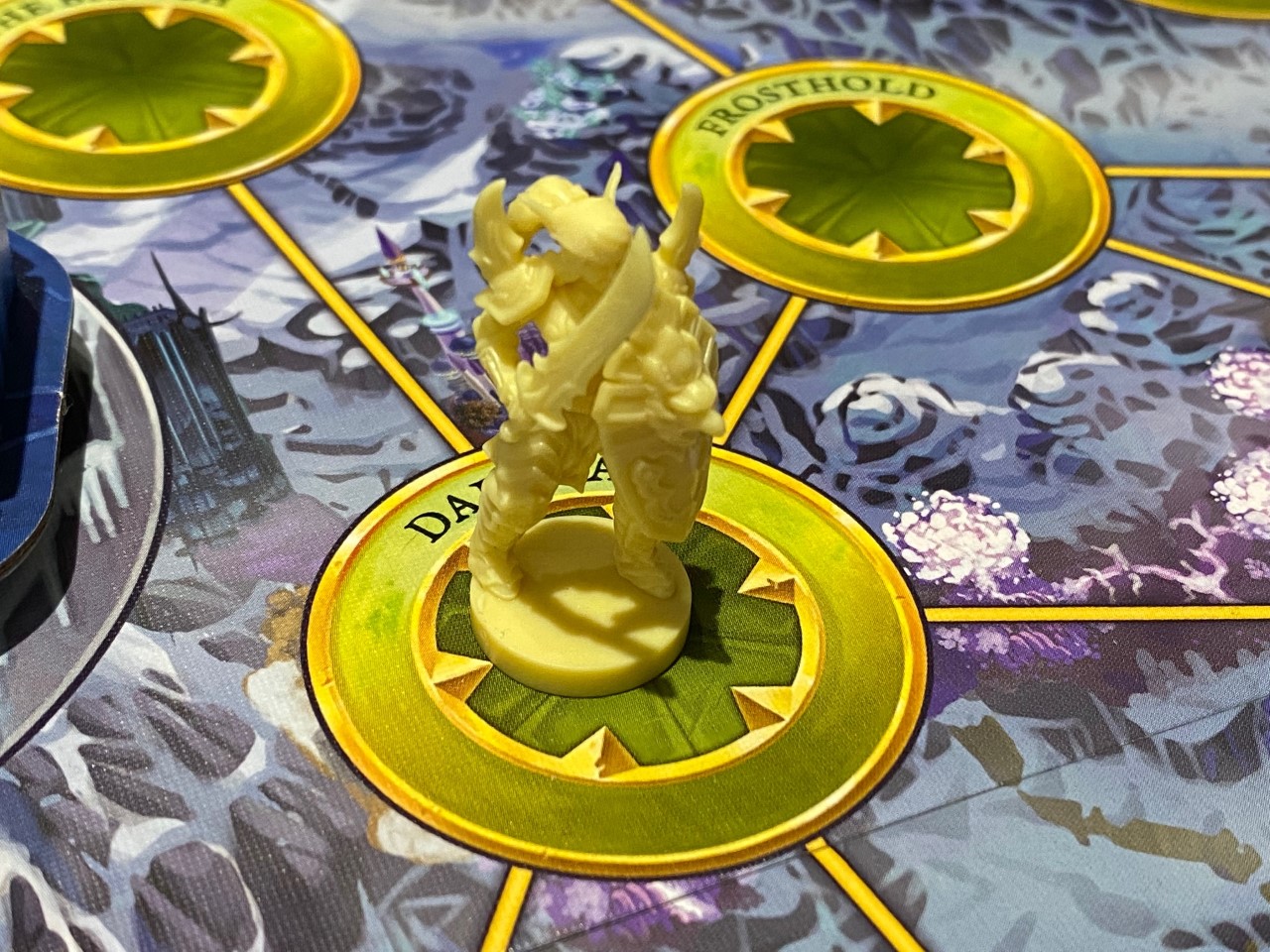 When a player has taken their usual four actions, plus any bonus actions, enemies will spawn and Abominations will attack. Spawning is much like in normal Pandemic, with cards being drawn to place enemies on the board at specific locations. Instead of causing outbreaks when a space reaches full capacity, a Despair track moves. This is the only “loss condition” in World of Warcraft: Wrath of the Lich King — when that track reaches the bottom, all players lose.

Abominations will actively move towards the nearest player and deal damage, and between this and damage done during quests and fights, players can be knocked out. Again, when this happens, Despair rises. To make matters worse, “The Scourge Rises” cards are seeded into the hero deck, and when drawn, a unique spawning occurs and things often go from bad to worse quite quickly. On the plus side, the hero deck also contains stronghold cards, which allow the players to add permanent bases to the board to enhance their healing capability and provide strategic points for fast-travel. 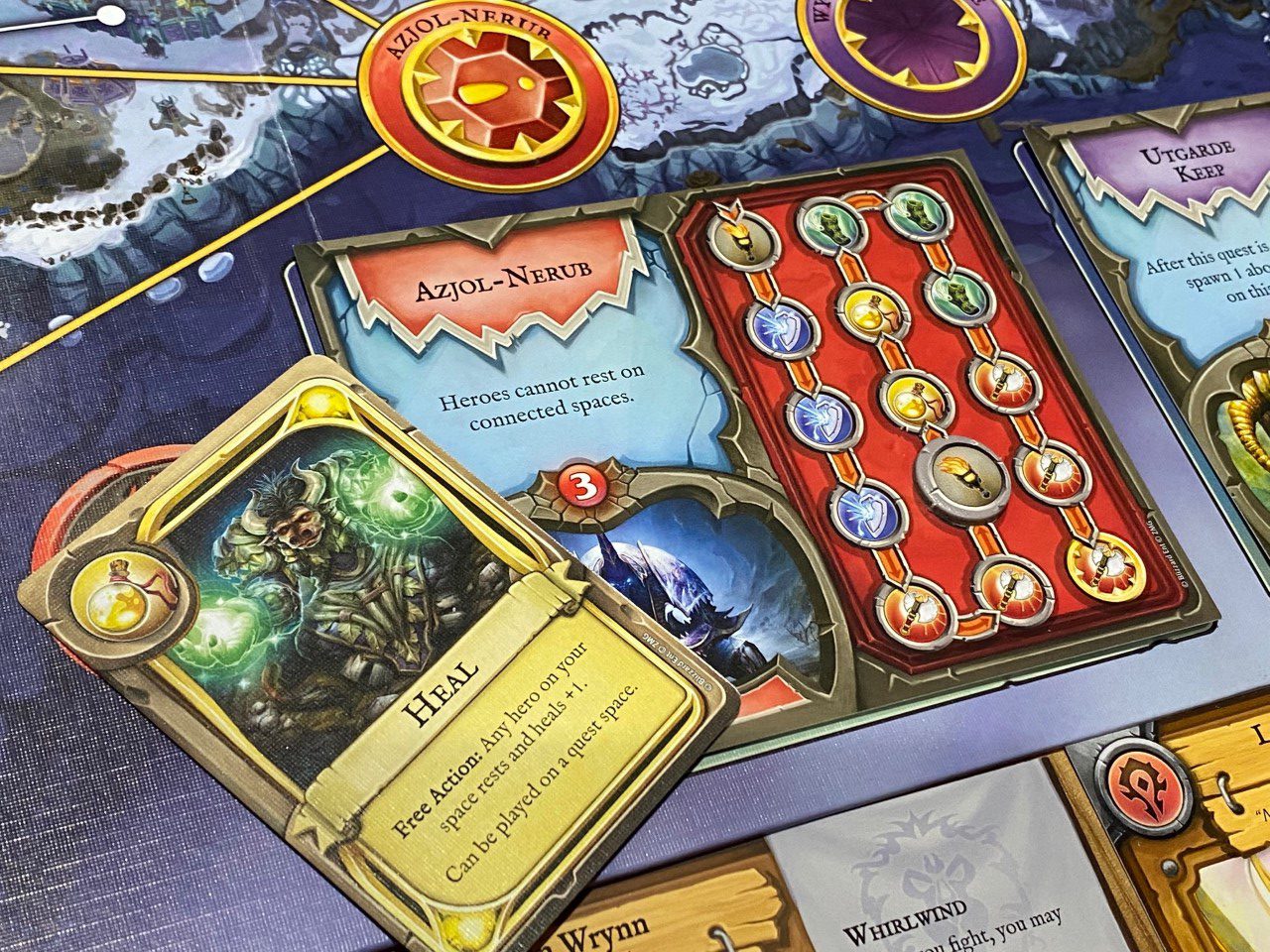 Bringing all of these elements together – the questing, the rewards, the multi-purpose hero deck and the straightforward need to fight the scourge and keep their numbers low — and World of Warcraft: Wrath of the Lich King makes for a game that has a lot of things going on, but with a very straightforward flow. Everything makes sense mechanically, and the thematic aspects really underline what you are doing — defeating Arthos’ minions and his lieutenants, then facing him in a final showdown — is very well done.

Also, as with any Pandemic game, you can definitely lose — especially if you play on the harder difficulty levels which feature more “The Scourge Rises” cards and fewer strongholds. That said, losing in World of Warcraft: Wrath of the Lich King tends to come after quite a lot has been achieved and there’s often a feeling that the players are racing towards a nail biting finish. We had relatively few “easy” wins, and only once or twice did we feel that we had lost by miles. 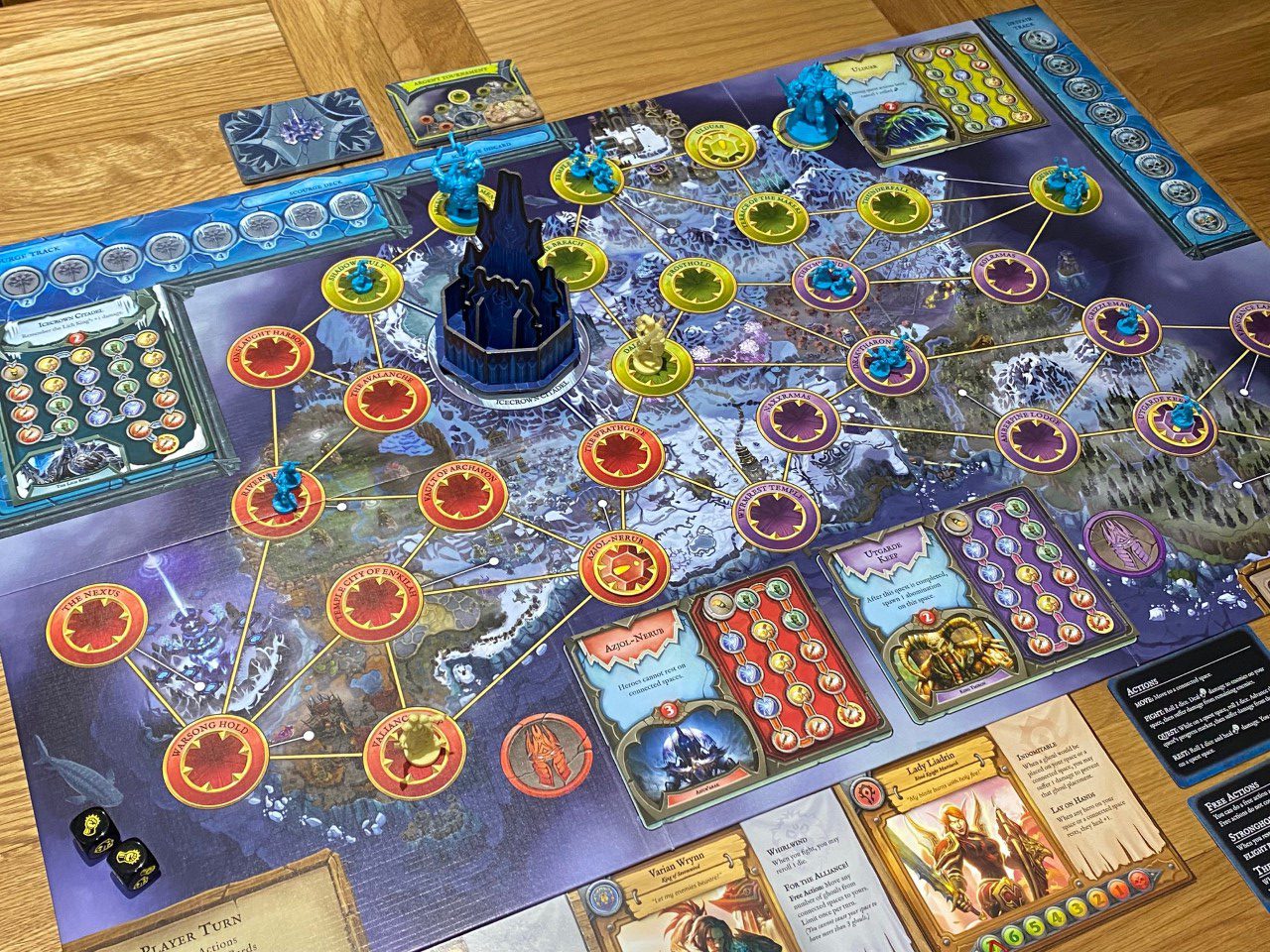 On that latter note, World of Warcraft: Wrath of the Lich King does feature more randomness (due to the dice rolling) than I think I’ve seen in any other Pandemic game. The hero cards do a good job of reducing and mitigating this, but you do need them for questing really, so bad rolls will have a negative impact on you. Most of those big losses I’ve just mentioned felt linked to a combination of unfortunate rolls and bad card draws, but I guess that’s how it always feels to lose in a game like this, to some extent.

You can purchase World of Warcraft: Wrath of the Lich King: a Pandemic System Game on Amazon.