During 2020, digital adaptations of my favorite board games were very welcome. With few options and brief periods during which I could play in person, proper online implementations were one of the key ways to keep board gaming alive. Things look slightly more positive at the moment, however, so is there still room for the likes of Monster Couch’s console version of Wingspan?

Wingspan, from designer Elizabeth Hargrave and publisher Stonemaier Games, is a game that we’ve already reviewed extensively. Our writer Hira covered first the original board game, and then the Nintendo Switch implementation. In her original review she admitted that Wingspan had become something of an addiction, whilst of the Switch version, she suggested that the adaptation was a worthy one, but that the interface was somewhat lacking. 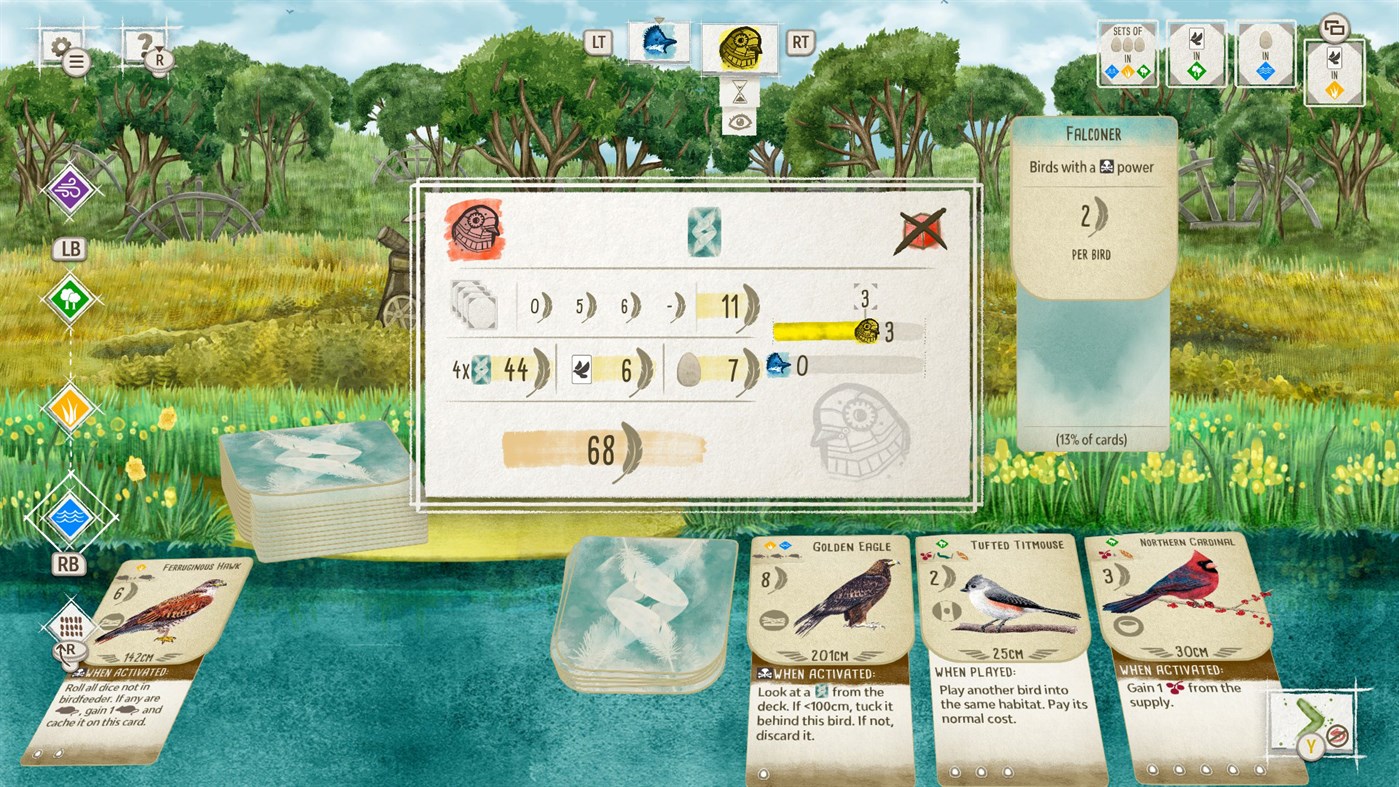 Now before I go on, I’m not going to explain Wingspan in detail because, well, we’ve done that before. Instead, I’ll let you read one of the pieces above. What I’d like to focus on here is simply the digital adaptation of the game, and how that compares.

With all that said, I could see the appeal of playing Wingspan on the Nintendo Switch, but for one reason or another, I have it on both Steam and on my Xbox One. In almost every respect, both of these versions are identical to the one that Hira reviewed on the Nintendo Switch, except that clearly there are neither touch controls, nor the ability to play on the move (except on a laptop, I guess). 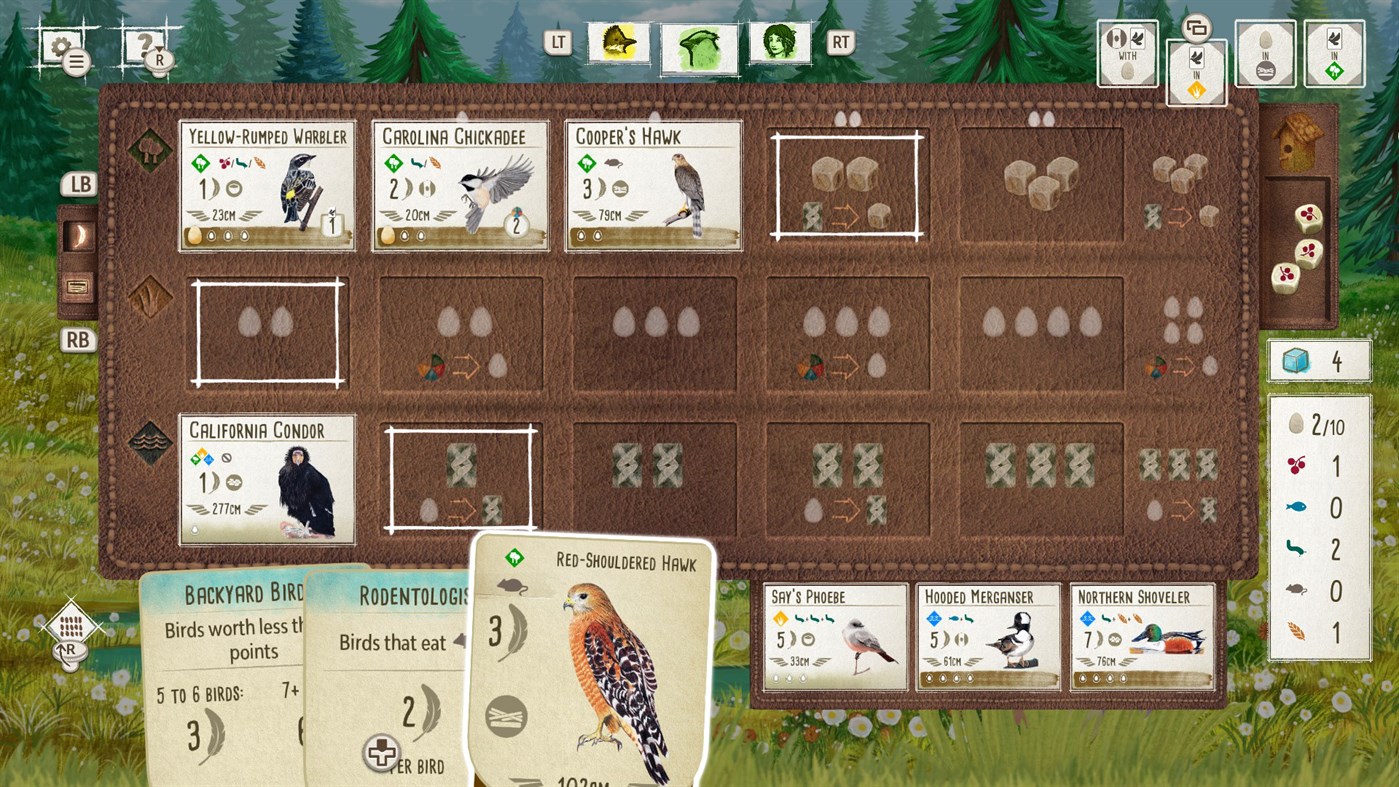 Having now played about ten to fifteen games on each of these platforms, I have to say that I agree with Hira’s comments about the interface. Wingspan — in physical form — is a game that excels in presenting the players with all relevant information in a straightforward way. Each player has a board featuring four rows (each of which represents an action) and five columns (each of which shows how powerful that action will be).

In addition, a plastic stand of sorts is used to display three birds that are currently available for selection (alongside a deck, offering a blind draw.) The final piece of information offered to players is the choice of food dice, shown in a customised cardboard bird feeder. The success of any digital implementation of Wingspan was always going to ride on how easily it could convey these same pieces of information. 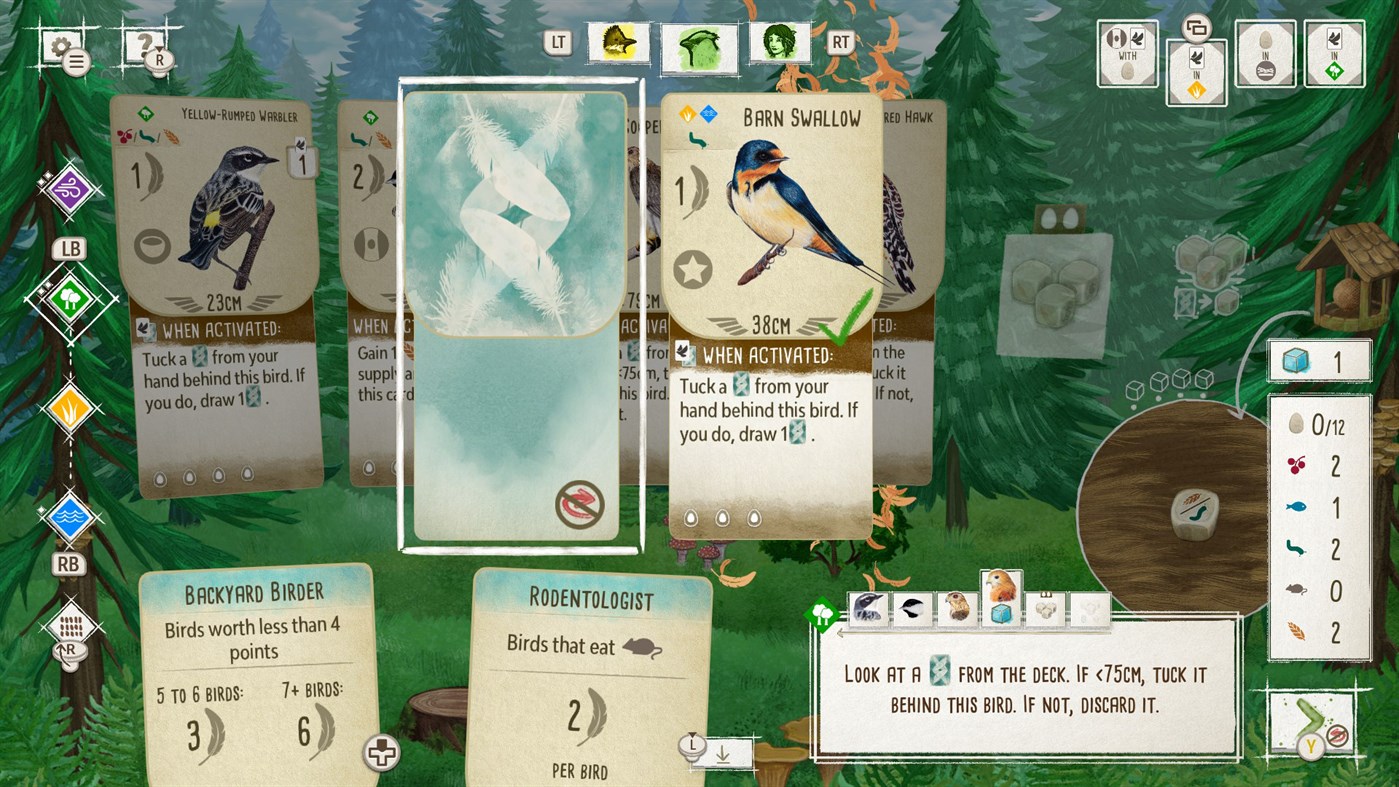 In the standard view, Wingspan digital doesn’t really work for me. Of those four rows I mentioned, the game presents each one individually and asks the players to scroll through them. You can only see the birdfeeder when looking at the top row (which links to drawing food) whilst the available birds can only be seen when viewing the third row. It’s really, really pretty, but it’s quite tiresome to work through each view to decide what to do.

Thankfully, with a flick of the right stick (or a click on the PC version), it’s possible to switch to a view that looks close to the player mats from the physical version. Even so, there’s a compromise. In this view, players can see all rows and all columns, but must use a button or the mouse wheel to switch between different sections of each bird card — meaning it’s impossible to see basic info like nest style and ability info at the same time. 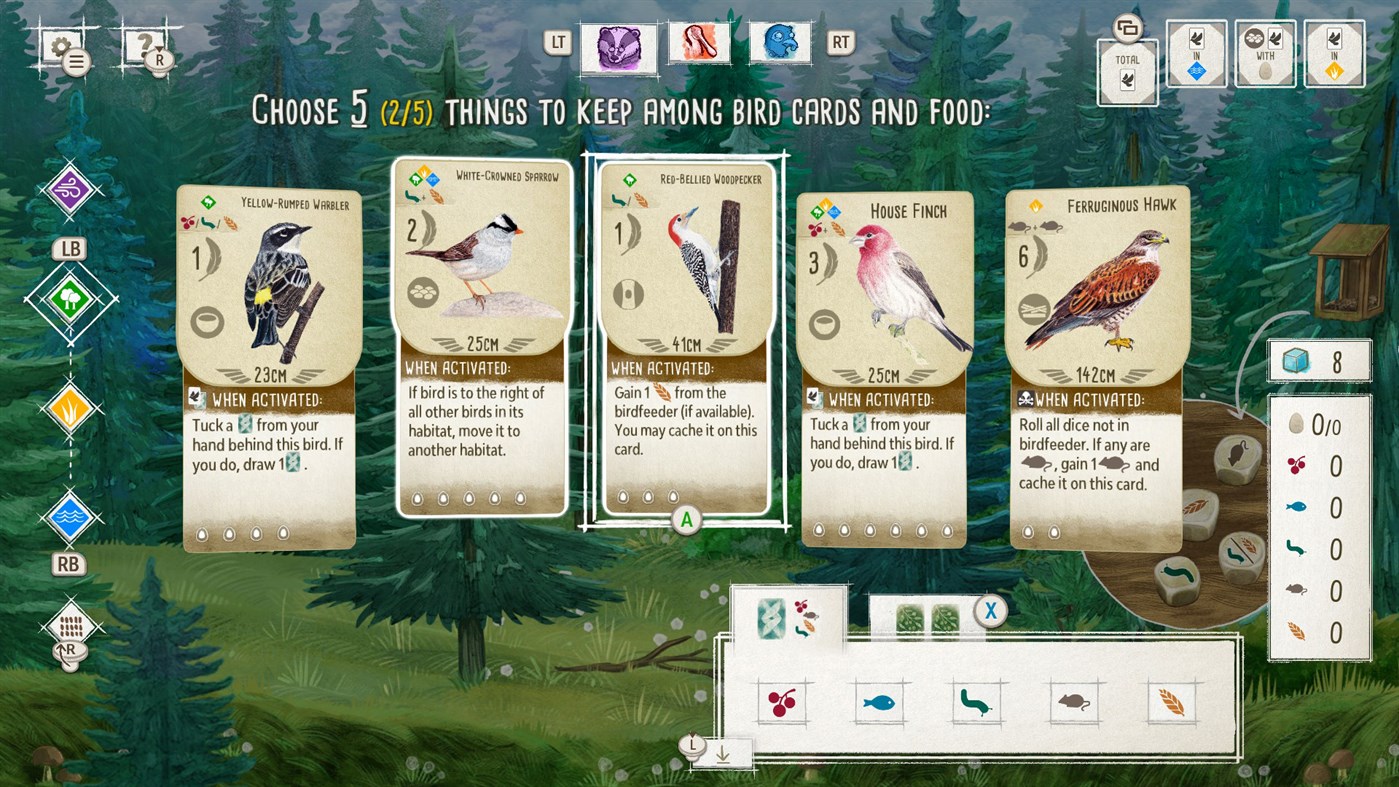 This combination of interface issues aside, there’s little to dislike about Wingspan on Steam or Xbox One. Both games are identical in terms of the attractive, pastel visuals, and whilst the choice of background music is fairly limited (maybe three tracks) it’s pleasant enough and as the strapline promises, it’s a “relaxing bird game”.

Currently, the digital editions of Wingspan don’t include the base game, and I hope that in time, the Europe and Oceania expansions will be introduced, potentially bringing with them minor tweaks to the interface that remains the only other bone of contention. If you’re a fan of Wingspan in paper form, or if the idea of a moderately complex engine builder focussed on birds sounds good, then the Steam, Xbox or — no doubt — Nintendo Switch versions are a good place to start.

You can grab a copy of Wingspan in digital form on Steam, Nintendo Switch and Xbox One.