When the Shutter Stops hits off Kickstarter with a flash

The writing in When the Shutter Stops reads like something straight of a pulp fiction novel, all curt dialogue and winding, poetic descriptions often referencing how soaked with filth the streets of Philadelphia are. In this case, the hard-boiled detective archetype is the ripe old age of twelve, though she’s got the mouth of someone twice that.

This mystery noir visual novel by Remort Studios recently went live on Kickstarter and, as of writing this, sits at about twenty-five percent funded. When the Shutter Stops’ full story follows the aforementioned private eye, Priscilla ‘Pri’ Vate, through a case that ultimately proves too much, ending her career on a sour note. Flash forward ten years later and she’s applied the photography skills she honed as a child detective to a new, safer job as a family photographer.

But just when she thinks she’s free of her old life, ‘like the stench of the city, the life of a Philadelphia detective never completely washes off’, reads the game’s Itch page. A serial killer she threw behind bars is soon to be released with the help of new evidence, so she must return to finally solve the case that broke her if she wants to keep her city’s streets safe. 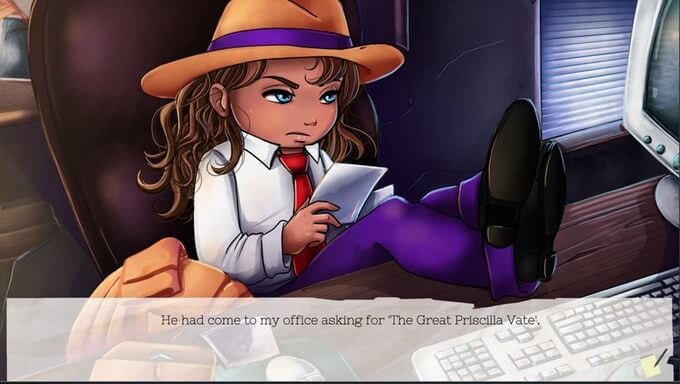 When the Shutter Stops’ demo, a mere 11,000-word venture compared to the full game’s 120,000, follows Pri during her younger days as a private investigator. She wiles away her time cracking open cases of marital affairs as she barely makes enough to keep her landlord from breaking down her door. However, with one call from the police chief, she gets swept up in tracking down a serial murderer, the infamous ‘Dart Killer’. Though her young age tends towards gimmicky at times, her character is written so true to noir stereotypes that the juxtaposition proves entertaining, especially when she’s needling rookie cops or reticent witnesses twice her size.

The game’s self-described ‘Americanime’” art style breathes life into a gritty, stylized rendition of Philadelphia, where fog and rain continually roll through and drudge up the filth from the city’s underbelly (oh no, I’m starting to write like a noir novel!). As explained on its Kickstarter, the city’s animated backgrounds correlate to real-world locations, with graffiti that changes over time. Backers of a certain tier can also determine what that graffiti ultimately looks like in the finished game. The game’s characters are just as expressive as the city itself, as their faces change according to your words and actions.

Remort Studios list a host of inspirations on their Kickstarter page, and they all read through clear in its writing. Movies like The Maltese Falcon, books like Sue Grafton’s Kasey Millhone Alphabet series and, though it’s a visual novel, it incorporates interactive sequences such as the ones in the Ace Attorney series. Pri’s ‘detective sense’, in particular, reminded me of Phoenix Wright; while investigating a crime scene, using it reveals the location of clues you may have otherwise missed. 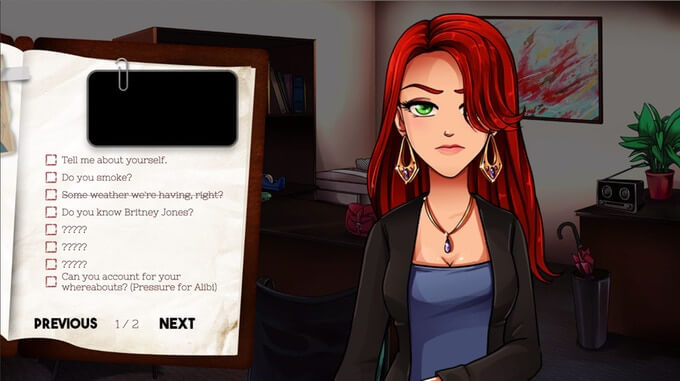 It also folds in the branching narrative and dialogue choices the visual-novel genre is known for. In the demo, you decide how to proceed when interrogating a suspect, whether you butter them up with small talk beforehand or cut right to the chase. While I didn’t get to see the outcome of my choices in this particular case (the demo ends on a juicy cliffhanger), the Kickstarter promises four distinct branches and three possible endings in the final game, as well as four optional romantic subplots.

If When the Shutter Stops seems like a project you’d like to support, its Kickstarter runs until October the 23rd. Depending on the tier, backers can receive everything from a signed physical copy to key charms to a personalized sketch from the game’s artist. Its demo is available on Itch.io now.