Vengeance: Roll and Fight is a frantic dice brawler that’s smarter than it seems

A few years ago I spent several evenings playing Gordon Calleja’s Vengeance. Vengeance was (and still is) a brutal, fast-paced miniatures game that has the players recreate scenes from classic vigilante films like Taken or The Transporter. The issue with the original was that it was pretty light in terms of gameplay, and it was all over too quickly following the exhaustive setup of scenarios, card decks and so on. Vengeance: Roll and Fight seeks to address this by offering a similar level of excitement, but with a much lighter overhead on setup.

Vengeance: Roll and Fight is remarkably well articulated simply by its title. Each player takes a player board, a gang hideout board and a few other peripheral bits including their character card plus any abilities and items, a marker pen and a movement token. Their token is placed on the start location of the gang hideout, then the boss health is set based on the boss card drawn. A few other bits of setup are completed by placing abilities and marking tracks, but other than that, setup is literally done in about two or three minutes. 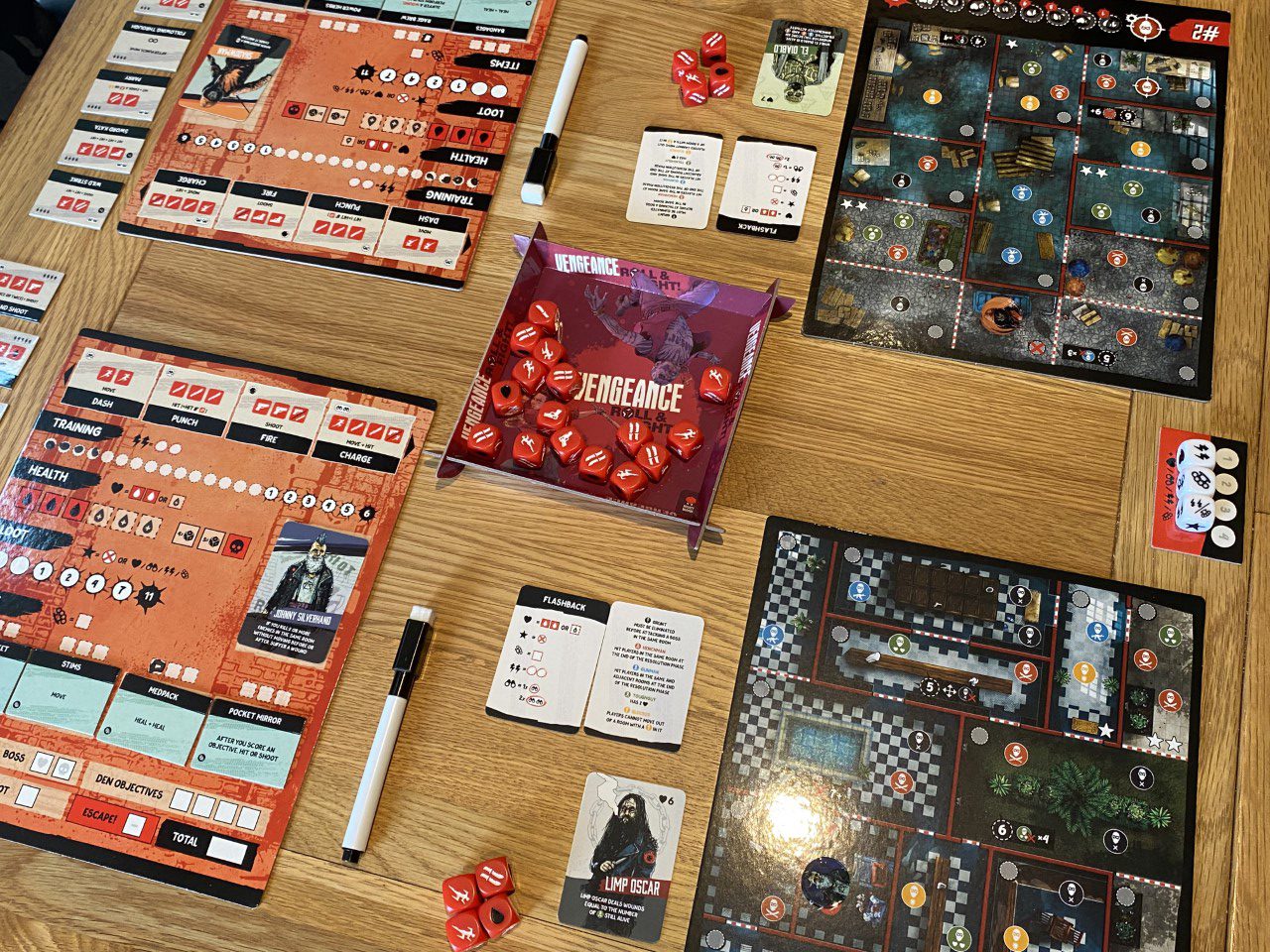 The one thing to pay close attention to is the dice pool. Depending on player count, somewhere between twenty (one player) and forty-six (four players) dice will be placed into the included dice tray. Each player will take four of these dice to use during the rolling phase — leaving the remaining dice as a tempting font of as-yet untapped power!

Before any rolling happens (well, any proper rolling) there’s a brief flashback phase. This happens at the beginning of the game and then in between every rolling phase that follows, and simply involves a player rolling three specific flashback dice. These dice are used to dictate which three “preparation” actions can be taken (plus one free action). These prep actions include marking off two points of experience on your player board, or preparing a skill (for use in the fight later) or learning an ability (by spending experience). 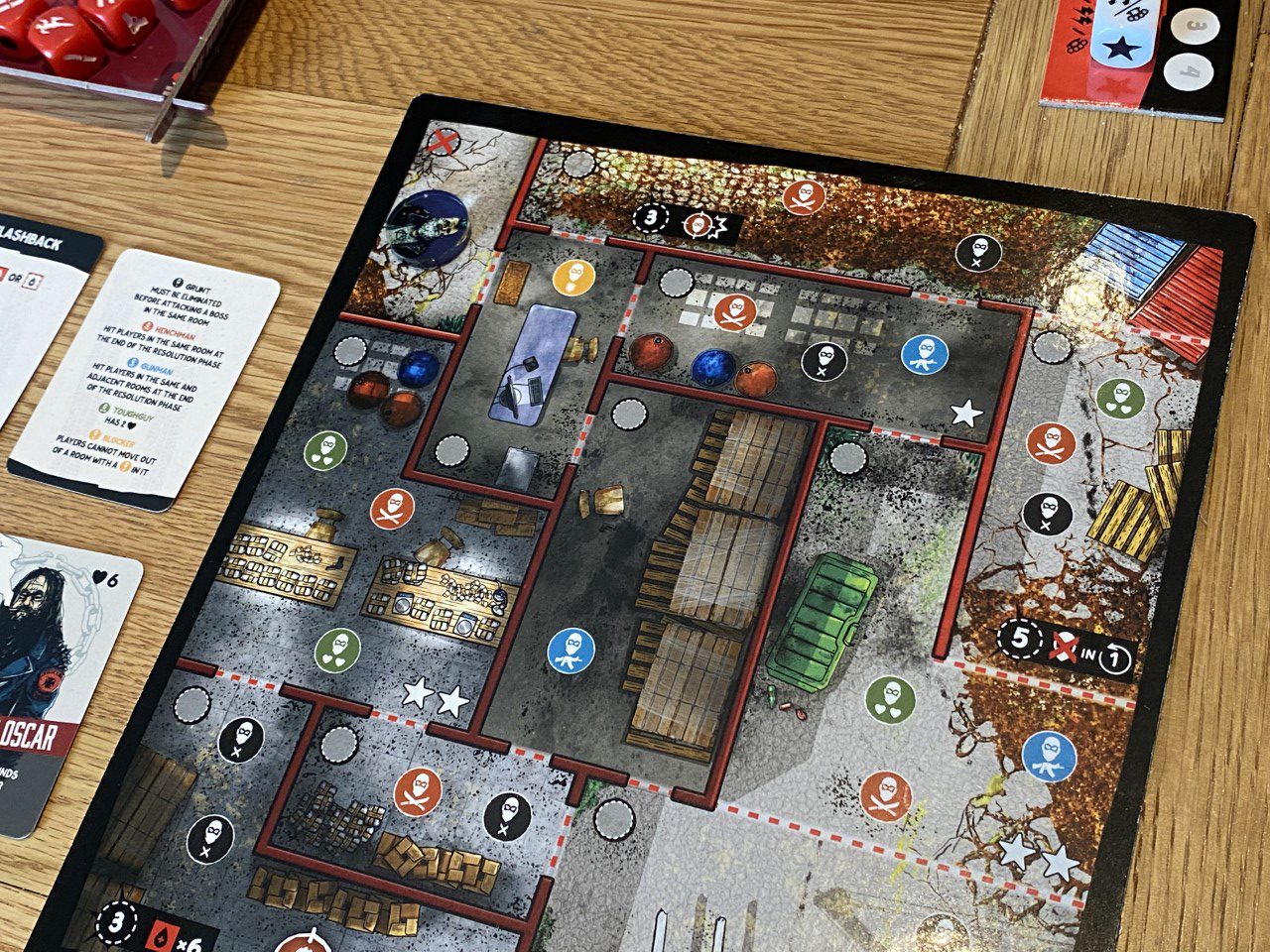 Once this is done, the rolling phase begins. This is (dun-dun-derr) a real-time, competitive dice rolling frenzy and frankly, if that sounds like fun — you’re going to love Vengeance: Roll and Fight…  But if it doesn’t, you may wish to look elsewhere right now — there’s no need to read any further. In brief, the players each roll (and reroll) their four dice until they either roll wounds (which can’t be rerolled) or any combination of knives, guns and dashes as to enable one of their abilities.

Let me break this down a bit further with some examples. If a player rolls the four dice and gets a wound, they will immediately set that die aside — and may continue to roll the other three. If they roll another wound, then they will have no choice but to place both wound dice onto their wounds track on the player board — which is also an option when only one wound is rolled, except that it effectively “locks in” that wound. 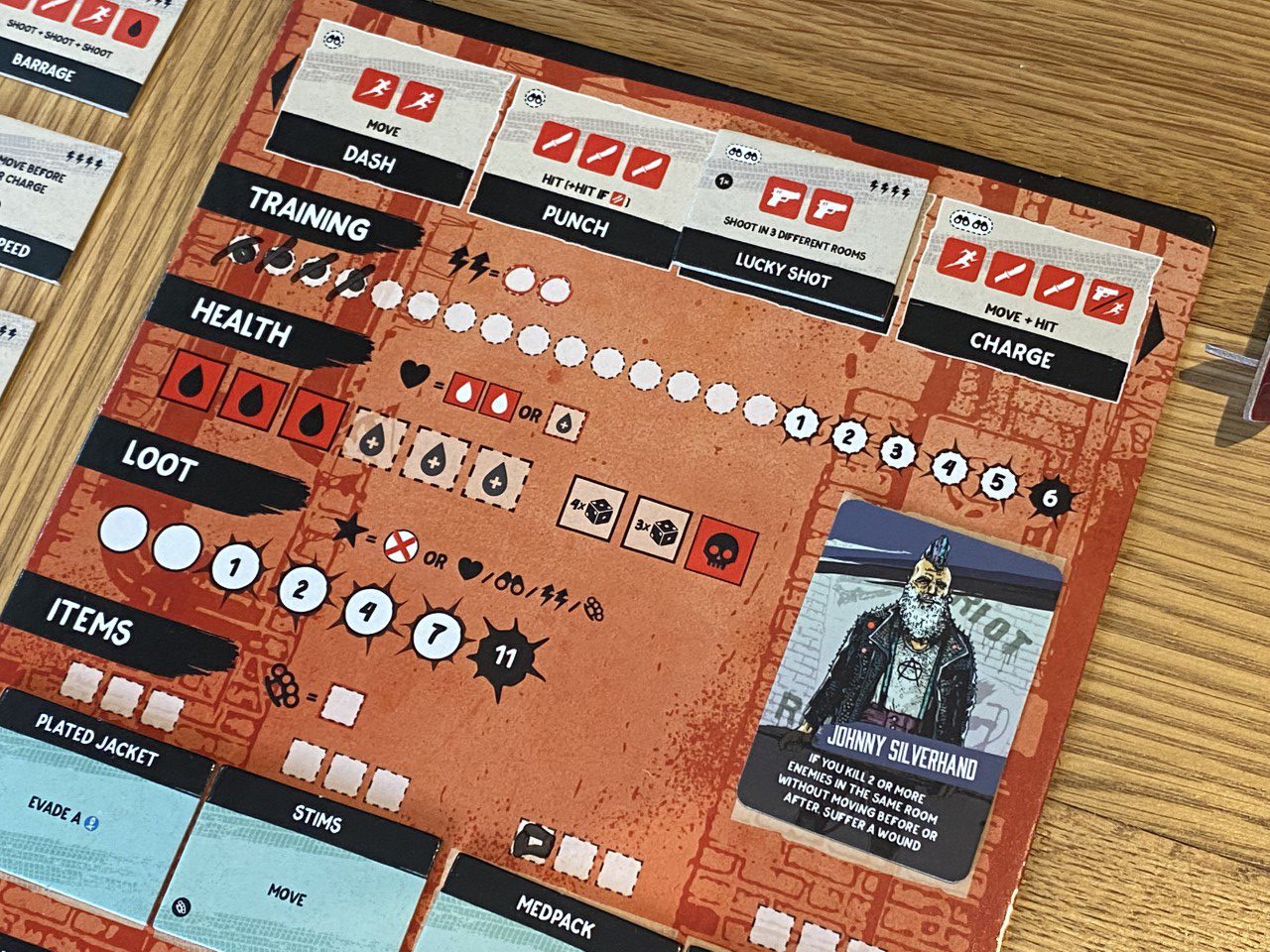 As soon as a player removes dice from their personal supply, whether because they lock in wounds or because they assign dice to skills (which is done by taking the dice needed for a skill and placing them beside it) they will take new dice from the shared pool to bring themselves back up to four dice in total. Bear in mind, this is done in real time, so in practice the players are throwing dice, cursing themselves for rolling wounds, throwing more dice, locking in skills, grabbing dice and repeating this process until all the central dice are gone.

Following about two minutes of mayhem, the dust settles and the players look down at the dice they have assigned to their skills, and then at the gang den board. At this point, Vengeance: Roll and Fight becomes a miniature puzzle — which hopefully everyone was thinking about as they rolled their dice. Basic actions allow their character to move, punch, shoot and charge (which combines move and punch) whilst “bought” abilities (purchased via experience during the flashback phase) do all kinds of interesting things — but in general are more powerful than basic abilities. 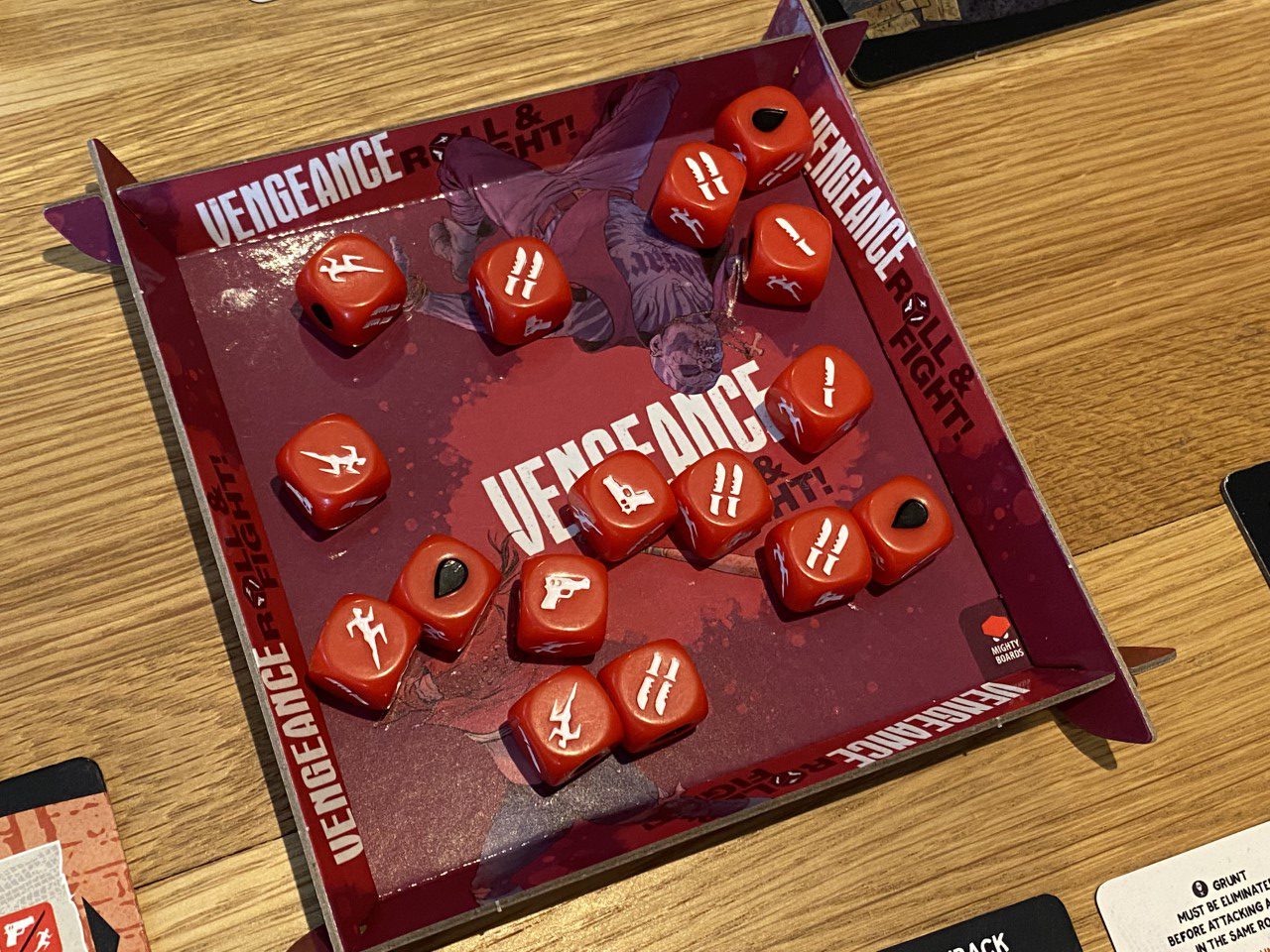 Using the skills that they have assigned dice to (most of which can have multiple sets of dice, whilst a small subset are usable only once per round) the players work out how to progress through the den. A typical early turn might involve using a move action to enter the building, a punch to smack the first bad guy, then a shoot to attack someone in the adjacent room. All of this is tracked by marking (with the pen) where you have been and what you have done — and thankfully all gang hideout and player boards are wipe clean.

There are a few other things to consider when making your moves, such as your character weakness. One character takes damage if he stays still too long, whilst another evades instead of hitting enemies (nullifying them for one turn, but not killing them). The randomly assigned boss and the gang hideouts themselves also have rules, including objectives that you’ll score for (for example) defeating all the enemies of a certain class. Of course, enemies will also fight back, wounding your character if you don’t clear those in the same (or in some cases adjacent) room(s) as your character. 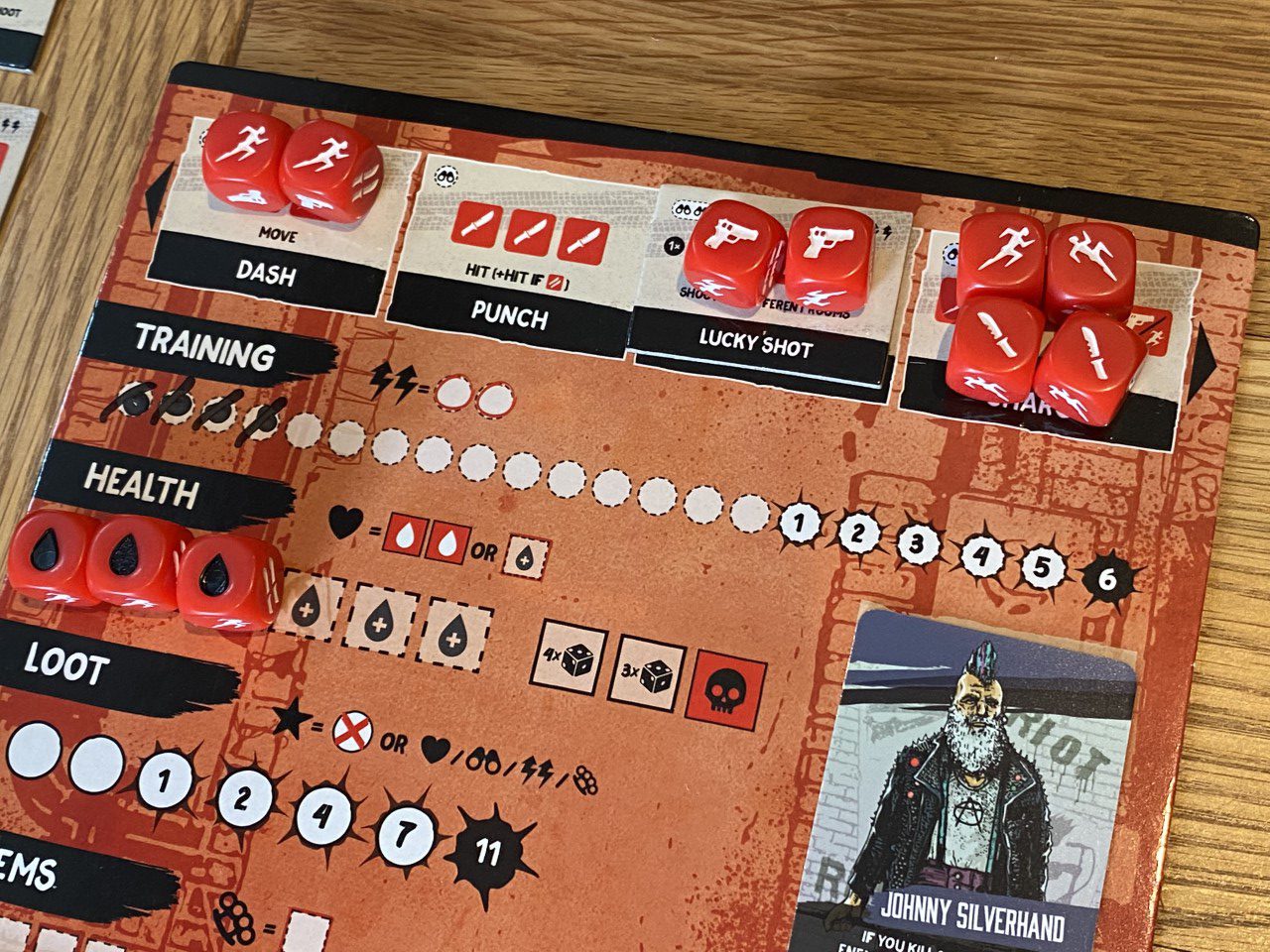 The notable thing about all of this is that whilst it might sound like a lot to take in, it’s actually quite pleasingly simple — and very logical. The flashback phase is kind of just a moment to take stock and prepare, whilst the rolling that follows is where the real action is. It’s a very enjoyable puzzle to have to work out how to make the most efficient route through a hideout by matching the situation to your available abilities — but even when you do, the dice may or may not be with you.

Of course, being a dice roller, there is a chance for frustration in Vengeance: Roll and Fight. Sometimes, things simply do not go your way — and some players just do not like the experience of rolling dice in real time and competing with their neighbours. A willingness to snatch dice and roll them as fast as possible with no etiquette is pretty essential in any game like this, and Vengeance: Roll and Fight has the potential issue that players with broadly the same set of abilities might look down at the end of rolling and find that one player has 16 of the assigned dice, the other maybe six, and the rest left over between the two players. That’s not ideal, but it does happen. 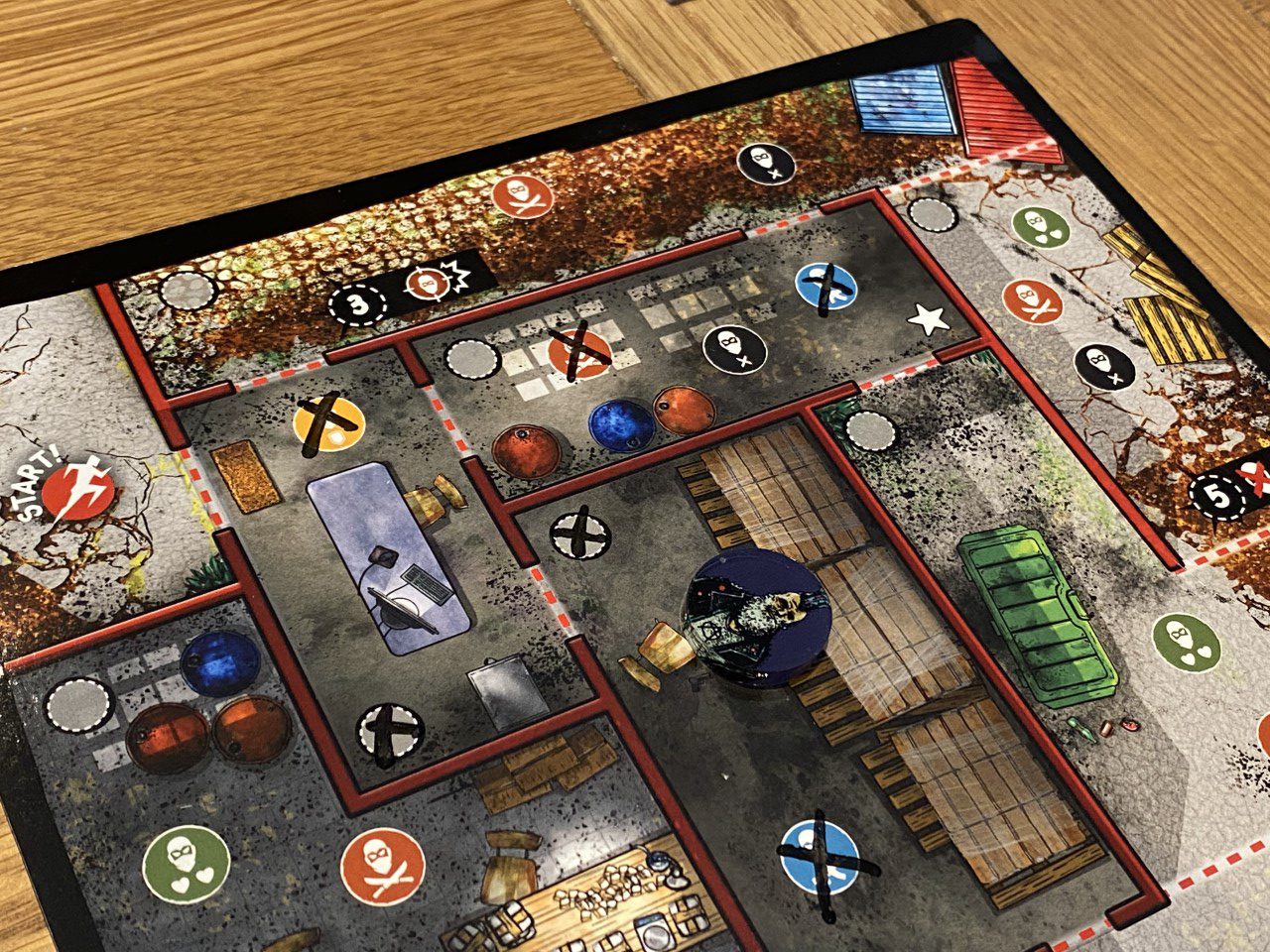 That said, Vengeance: Roll and Fight does what it says on the tin. It allows players to roll and fight their way — fairly quickly — through wave after wave of bad guys, followed by a variable boss encounter. There are twelve different hideouts to visit and about seven or eight bosses, all of whom bring their own special abilities and challenges. This makes it one of my favourite roll and writes (but it’s not writing, it’s fighting) to date.

You can find more information on Vengeance: Roll and Fight on their Kickstarter Page.