Robot Royale requires a lot of thinking ahead

Some board games have a lot of depth when it comes to the way you need to think. Thinking a few actions ahead so that everything lines up properly, is exactly what you need to do in Robot Royale, a board game all about robots shooting each other while they dodge trapdoors.

In Robot Royale, you have a grid of tiles that each have four spaces on them. Each of these squares shows a hatch, which will open the minute a robot moves off of that space, making that space unusable again in the future. There are also walls, shown by black and yellow tape, that cover some of the area of the tiles. When you start your robot can be placed anywhere on the map that you want, as a token, with an open hatch tile positioned underneath it, ready for when you move. 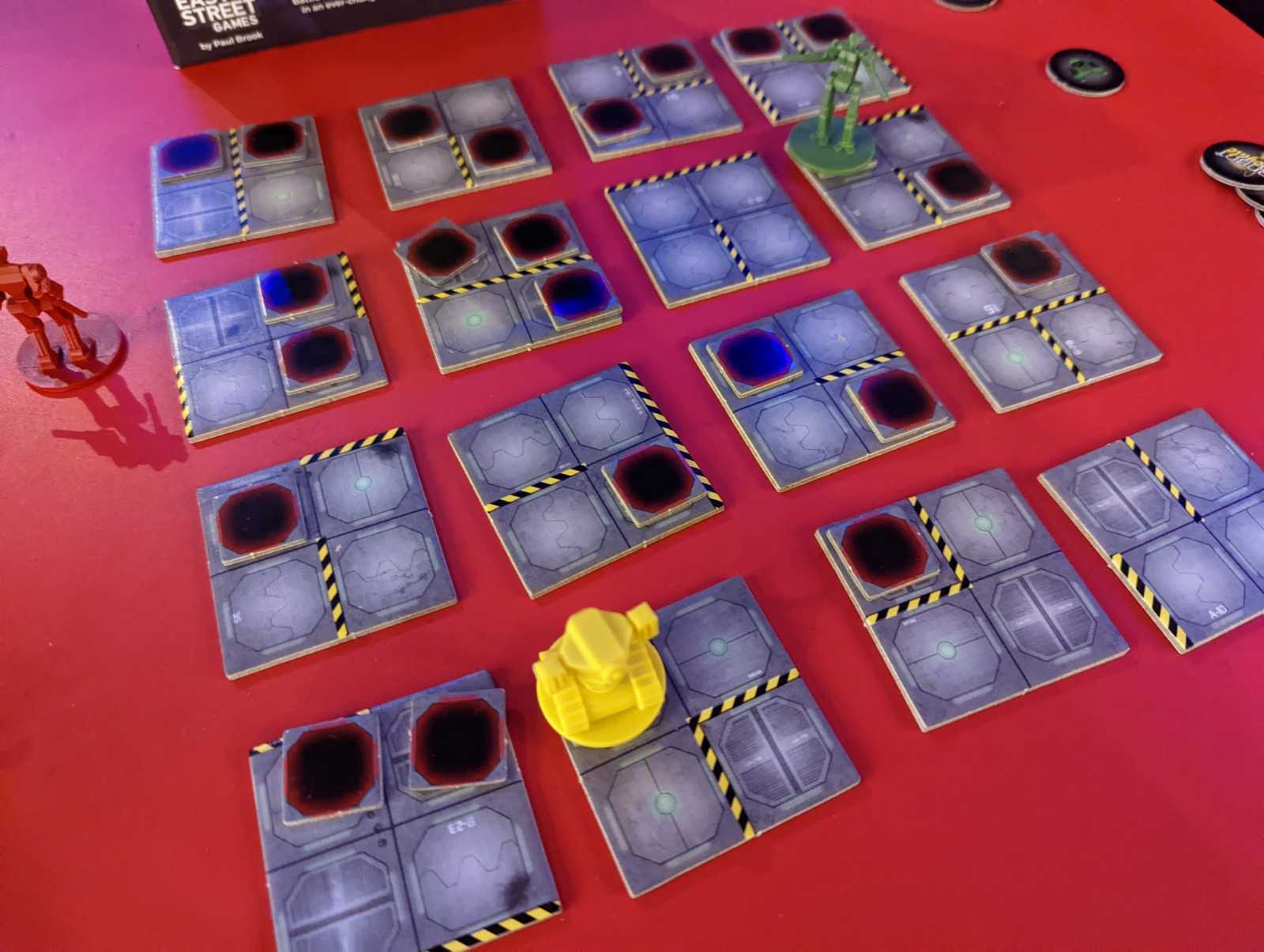 The first time you place down your robot in Robot Royale, you will place a flat token rather than the figuring, as your robot is building itself up. This means you cannot be attacked. On your turn, however, you become fully spawned in. This same thing happens each time you die and respawn in the game. On your turn, you are able to rotate the tile you are on, then move your robot in a straight line until it hits a wall, and then, after your move, turn another tile that you are not on. If you have a clear shot of any robot after this or during this process then you will shoot them dead.

At first, you might think this is a pretty easy task. You just need to turn your tile, move, and then turn another tile after to protect you. But, I find that thinking that many moves ahead and having to protect yourself as well is a lot to plan — as you can shoot any of the robots at any time, it’s just about trying to line them up. It’s great that you cannot move anywhere you want, and instead need to move in one direction only that’s not trapped by a wall, as that limits what players can do and makes it easier to rotate a wall into their way. 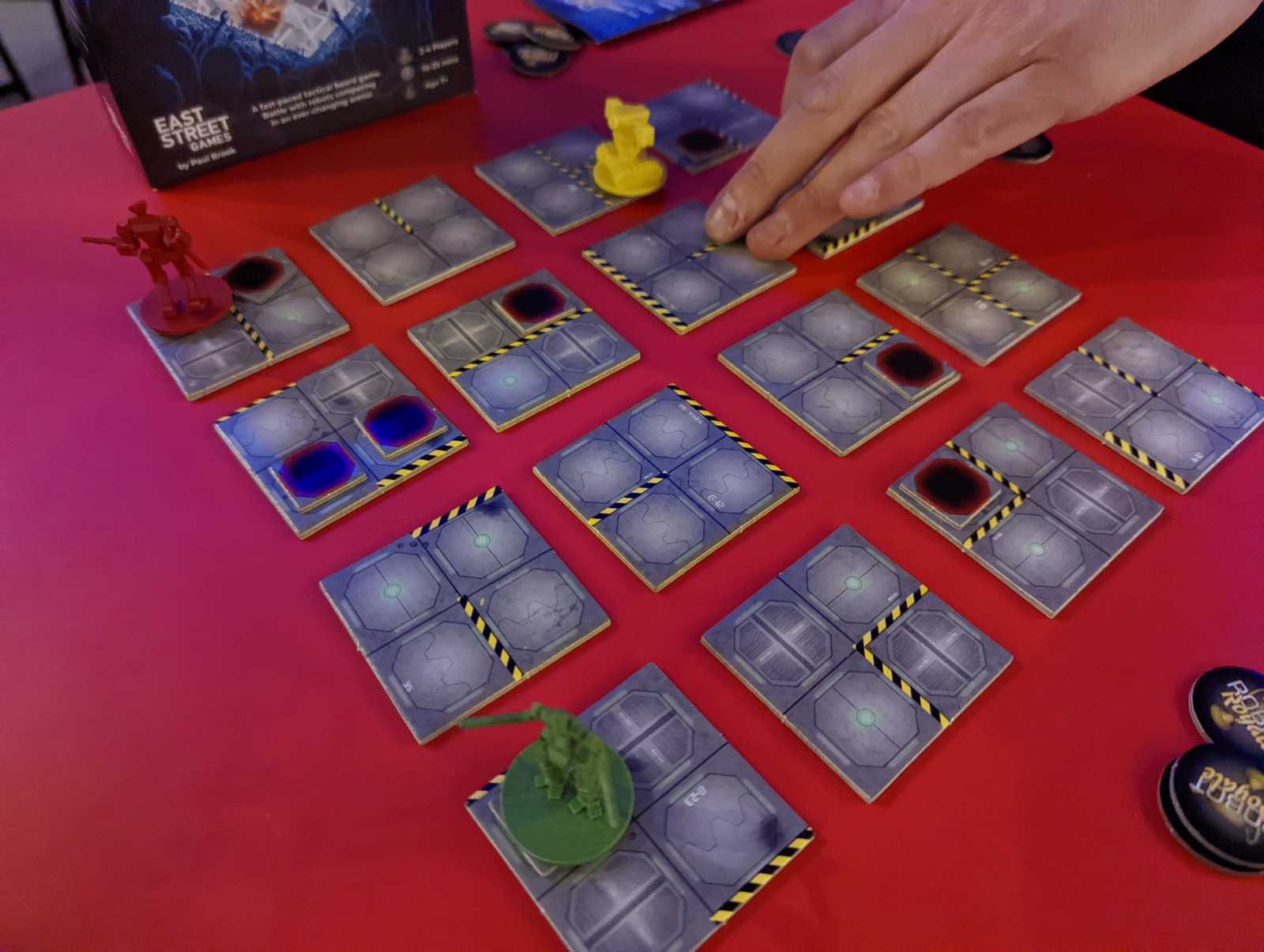 After you have left a tile, as previously mentioned, the hatch opens up so that the square becomes a space that can no longer be landed on. This changes the way you have to think about the space as the game proceeds. Each time you do kill a robot in Robot Royale, you do gain a victory token. Collecting a specific number of these, depending on the number of players in your game, results in a win.

We got the chance to play a bit of Robot Royale at Tabletop Gaming Live. I was dominated by the other two players at our table as it’s not my kind of game, but they both really enjoyed it. It’s a lot to think about, especially as you have to imagine the way the map can be rotated in the next round. It’s a game well worth playing if you have the mind for it. 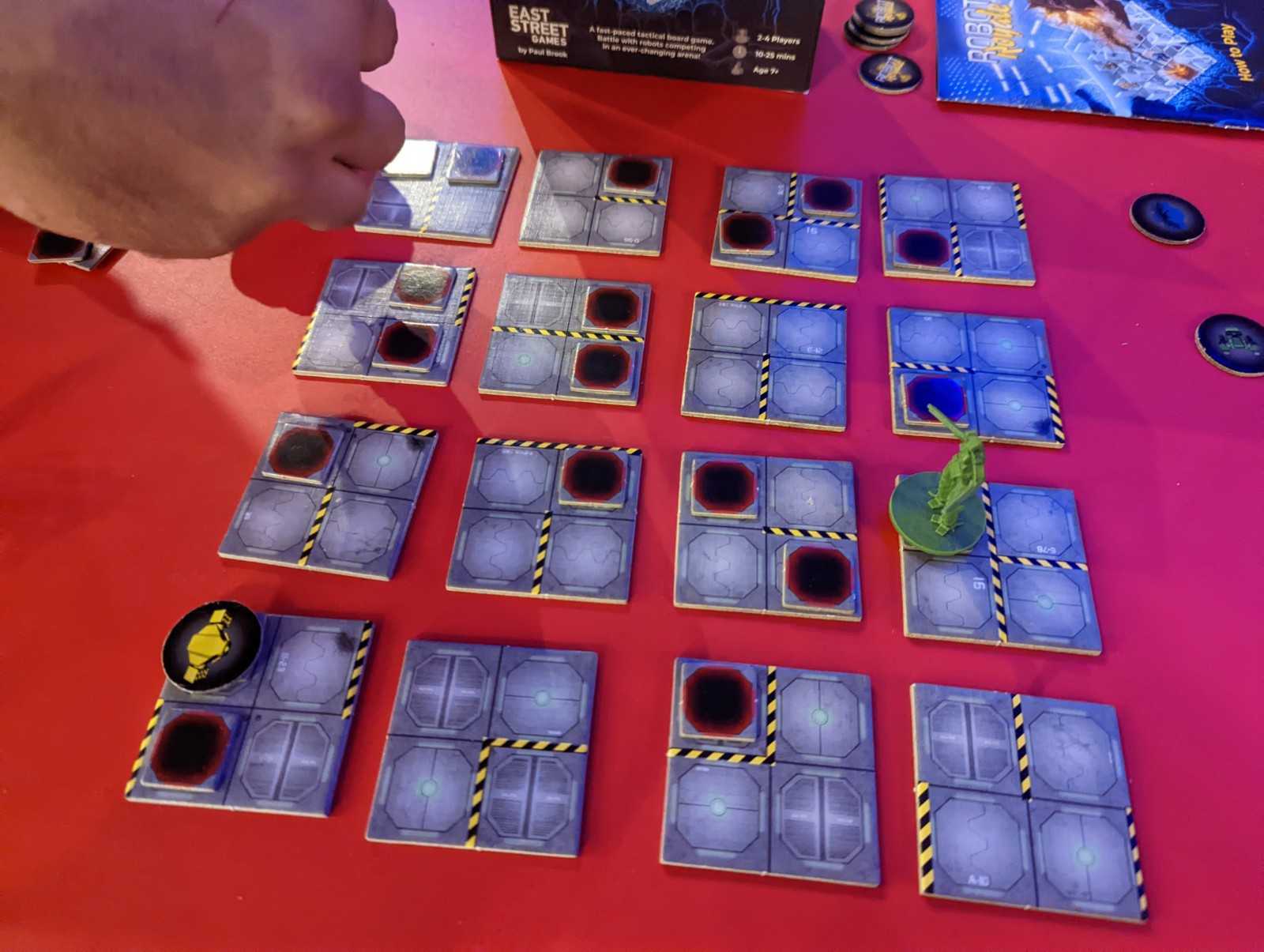 You can find Robot Royale, to purchase, through their Kickstarter page.