Puzzles in a controlled, scientific facility and a wisecracking robot might feel like a familiar combination, but Unbinary shouldn’t be passed over because of its familiar-sounding set-up.

VR, in its modern form, has now been around for long enough that most people who actively engage with it understand the restrictions, weaknesses and strengths of the technology. Unbinary is perfect for those people; it underlines exactly where VR is at this moment in time, for better and worse. It’s a clever setting, well-written, and there’s a little bit of room for chaos and the unexpected; but, motion and movement issues are prevalent, and sometimes there’s just not enough direction or onboarding for a title where you’re literally there in the world.

Unbinary is a first-person puzzle game that pivots between multiple different settings, each one beautifully drawn and with beautiful animations. The game is apparently entirely hand-drawn, and while that might not be the initial impression it gives, it looks beautiful both static and in motion. The transitions between the different locations are stunning, and it’s hard to find any real flaws in the visual design. In fact, it’s only some of the level design of the earlier levels, when the puzzle elements haven’t quite clicked into place, that gave even a slight opportunity to complain about the design. That confusion only really comes from the fact that most puzzle games of this sort are almost entirely stark white, with the only coloured elements being interactive or clues. Unbinary doesn’t follow this logic, there are crates, dioramas, circuit boards and much more, all colourful objects that litter the walls and corridors of the simulation. At the start, this can be quite confusing, and the absence of direction can create an air of claustrophobia, however, once you learn what to ignore and what to engage with it becomes much less of an issue.

At that point, it becomes a pretty linear puzzle game, but a good one. The story has you, a random human, helping train and test your computer companion, Webby, who is set to take over responsibility for… oh, all of humanity, once the tests are done. Webby serves as a tutorial meets unreliable narrator meets companion, with indirect jibes and throwaway witty remarks breaking up the otherwise nigh-silent puzzling. 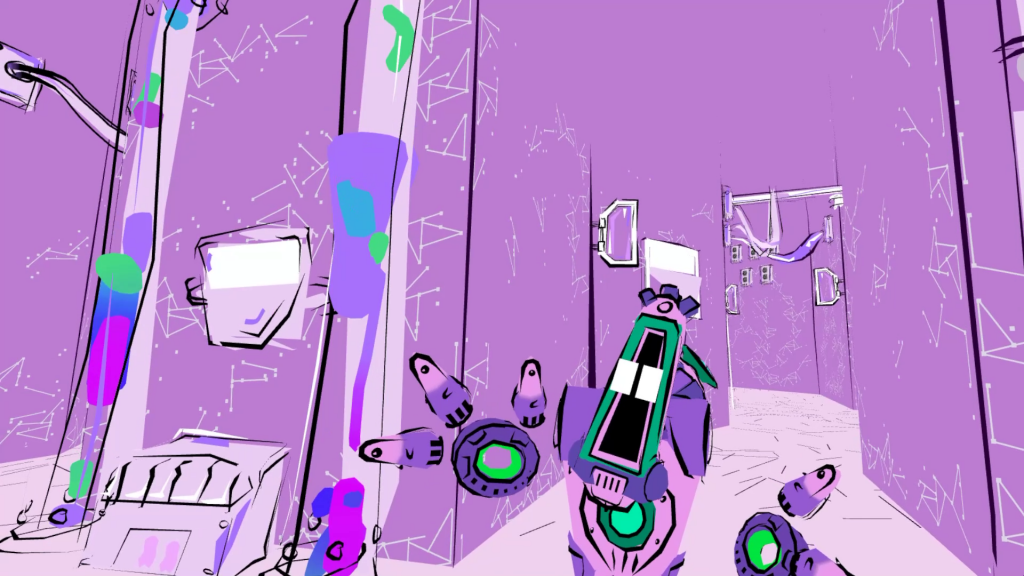 The puzzles revolve around different types of masks, one lets you do physical actions, another lets you hack, another lets you interact with robots. You have to swap these out to cycle your abilities and get through each level. It’s a clever way of making gestures and movements perform different actions, removing the reliance on context. It’s actually incredibly well done, and the use of the mask mechanics allows the puzzles to evolve in a clear and digestible way. In fact, I was surprised that Unbinary only came in at three hours long as it certainly felt like they could have kept expanding by adding more and more masks. It’s a great system.

All of this said I found the movement speed to be jarring. I’ve not played too many free-movement games, but having the analogue stick slide you across the floor is very jarring. At first, I made sure to move slowly and wave my head around as I did it, to offset my body adjusting for the momentum that wasn’t there; but in the end, I just used the teleportation transport mode instead. It’s a shame, they’d clearly made efforts to try and make it comfortable, but the analogue sensitivity was just very high.

Movement issues aside, Unbinary is an incredibly well-made VR puzzle game, while it likely won’t set your world on fire, it will keep you entertained throughout the campaign.