Ankh: Gods of Egypt completes the Eric Lang trilogy, but does an increase in plastic riches result in a better game?

Along with several other games that have really “changed” the scene for me (including Scythe and Terraforming Mars) Eric Lang’s 2015 Blood Rage is a watermark in gaming history. Blood Rage had it all — Vikings, amazing miniatures, tight area control and immersive card drafting and did I mention Vikings? Obviously, Vikings are cool, but even more so are the Gods of ancient Egypt — Ra, Isis, Horus and pals — and it’s the mixture of theme, non-random mechanics and even more gorgeous plastic that might just give Ankh: Gods of Egypt the edge over Blood Rage.

First things first, whilst I’ve only mentioned Blood Rage and Ankh, both games are actually part of a trilogy of games made by designer Eric M. Lang and released by CMON (Cool Mini or Not). The third game, released between these two, is Rising Sun — which also carries with it an exceptional theme in the form of a mystical Sengoku-era Japan. We haven’t reviewed Rising Sun, but I have played it, and whilst I quite enjoyed it, there’s no doubt that it suffers when compared directly to Blood Rage and Ankh — just know that if you are a completionist, you’ll need all three games to make up the set. 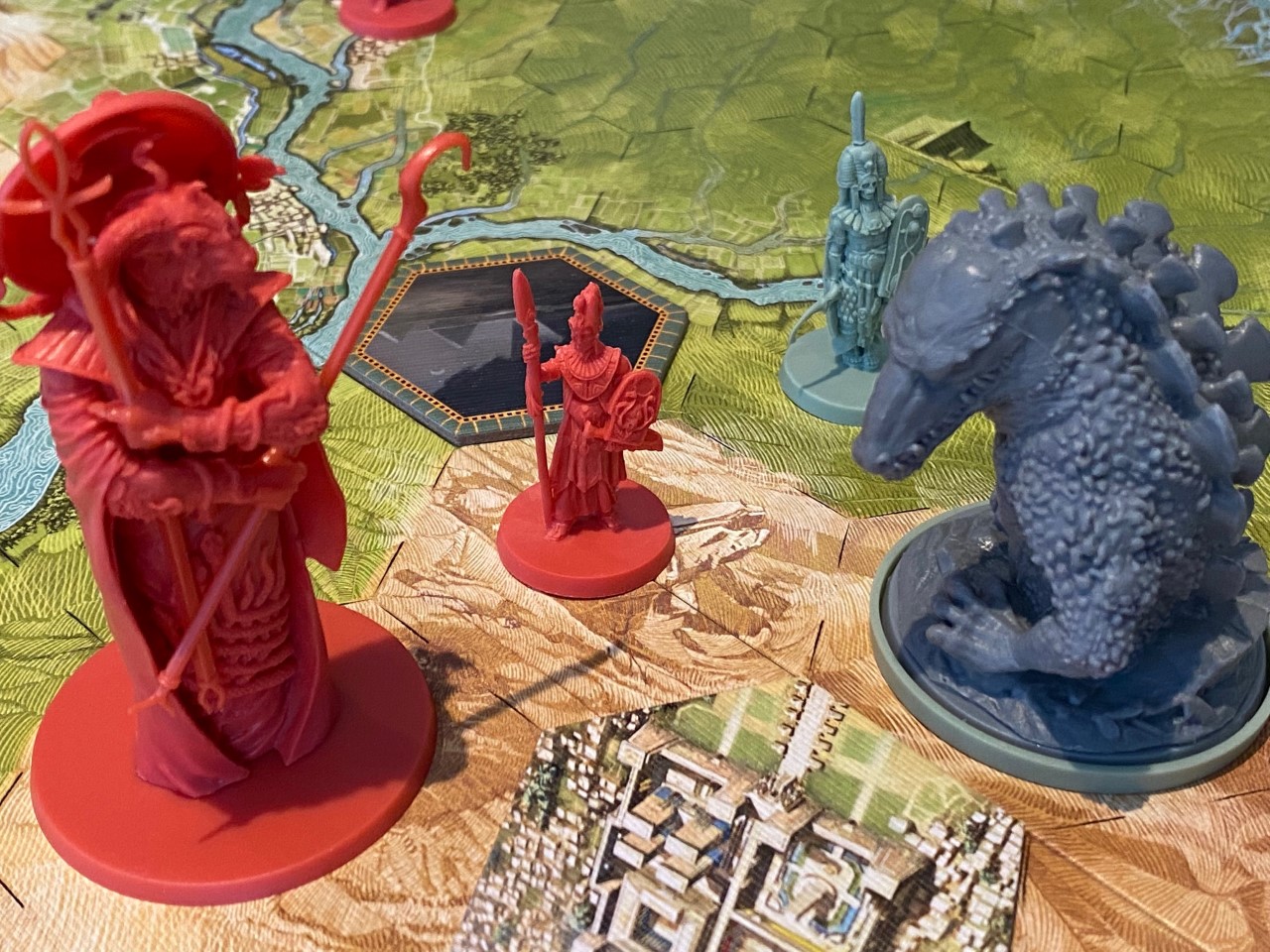 The main thing that links these three games (aside from the designer and the publisher) is that each one is a different take on area control, and whilst each has common elements (such as basic units and some recruitable, mythical creatures) the gameplay is very different from one game to the next. In Blood Rage, I felt that there was a clear focus on space (as the board gets smaller with the passing rounds) whilst in Ankh, the focus is more on the passage of time.

In short, the players each control one God — Osiris, Anubis etc — from a selection of five in the base game. As with all CMON games, expansions shipped with the Kickstarter, so additional Gods are already available if you really like the game. The objective of the game is to be the one God (or Gods — which I’ll come back to in a moment) who either reaches the top of the VP track, or finishes highest after the end game is triggered. 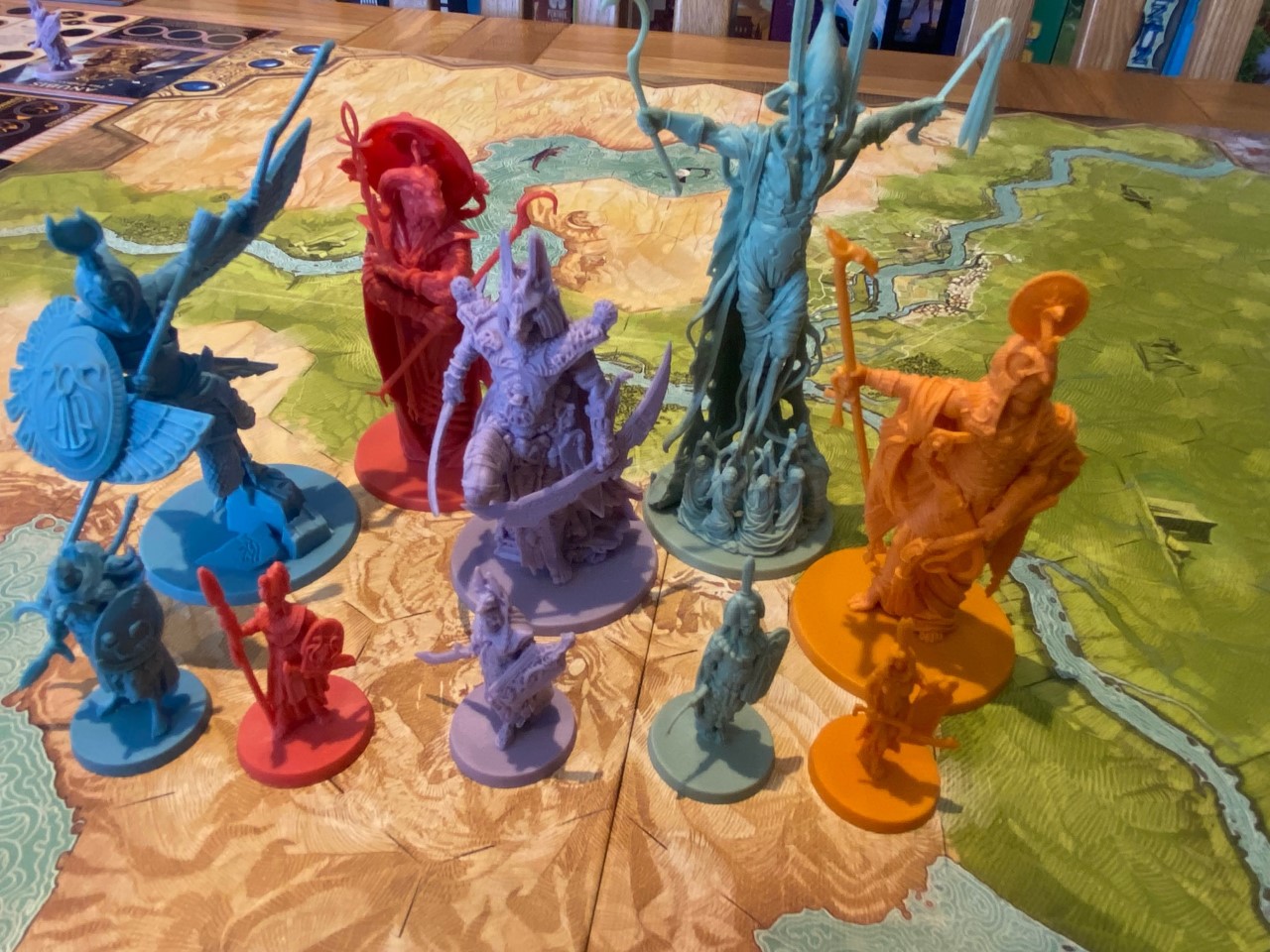 In Ankh, VP represents the amount of devotion a God has among the people of Egypt, and as the rounds pass, the game indicates that any God that is falling behind is being forgotten. In three, four or five player games, Ankh introduces a controversial merging mechanic, where the bottom two players actually merge to become a single God — sharing the usual two actions that a player would take on their own and receiving a special “merged with so-and-so” action card.

This mechanic is completely unique as far as I know, and I am reminded when I play Ankh that what made both Blood Rage and Rising Sun interesting were the things it did differently. In the context of Ankh, many people think that the merge mechanic is overpowered and awkward (just as they felt alliances were unbalanced in Rising Sun), but for me, the outcome of the merge is one of the most fun aspects of the game. It’s fair to say that some players have aggressively house-ruled Ankh to avoid the merge, but I’m reviewing it on the basis of the official rules — merge included. 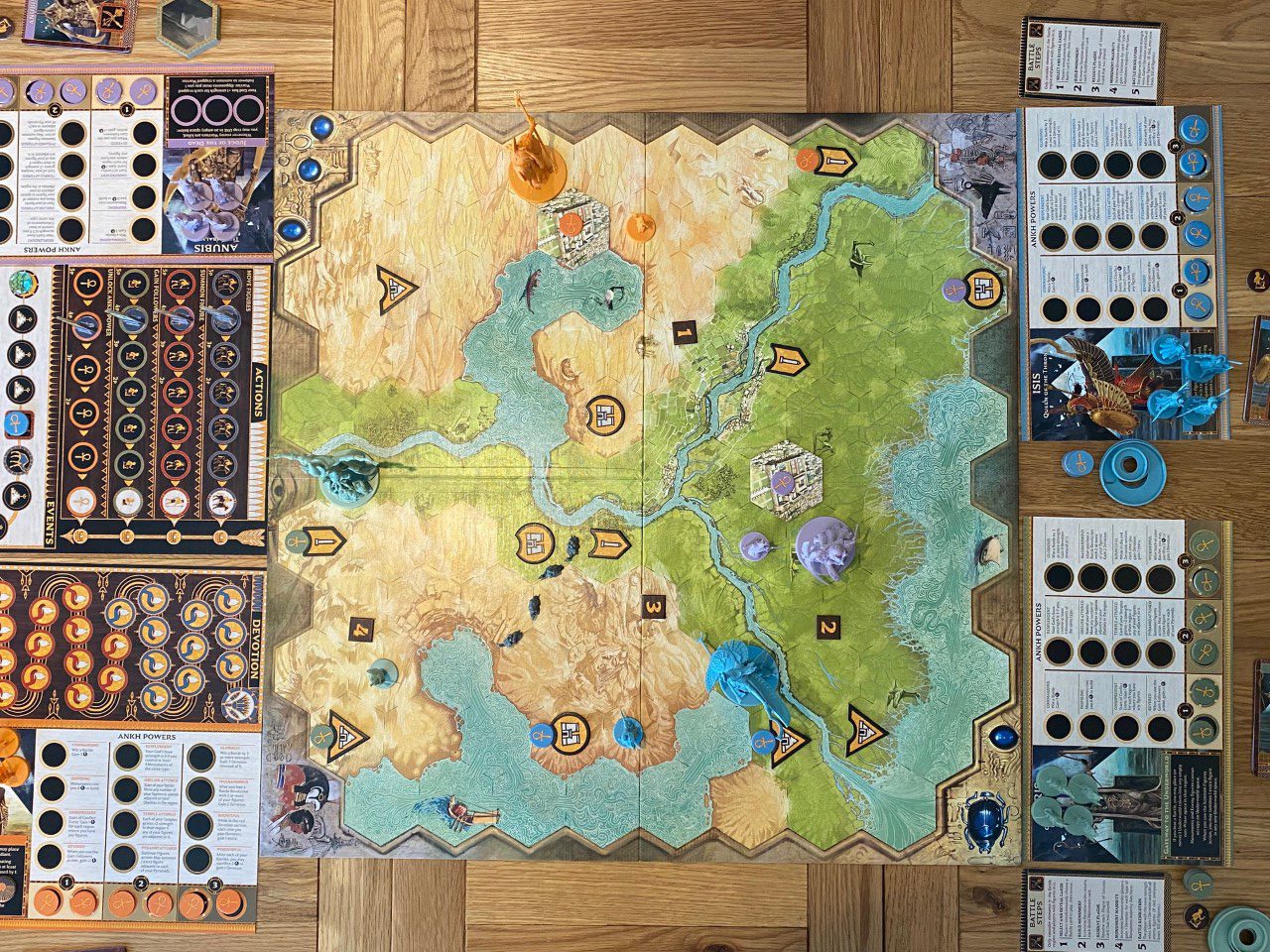 With that important point made — and all players focussed on ensuring that their God survives the merge (unless their strategy develops to the contrary as the game develops) — let’s talk briefly about turns in Ankh. For me, Ankh is by far the simplest game in the Lang trilogy — and all that a player does on their turn is take two actions (or one if merged) from a choice of four. These four actions are (in order) move figure, summon figures, gain followers and unlock Ankh power — and it’s important to note this order of actions, because a player must choose actions in descending order (so if you choose to unlock your ankh power first, that will be your only action).

Eagle-eyed readers will also note that the action track which sits beside the main board has different player counts printed on it, and it has a kind of “countdown” style with markers moving left to right. The point of this is that the tracks are longer with more players in the game and shorter when there are fewer, this is because should a track reach its end when a player takes the associated action, then it will trigger an event on a separate board — and end their turn. So again, there’s a bit of science and/or jeopardy when it comes to action selection. 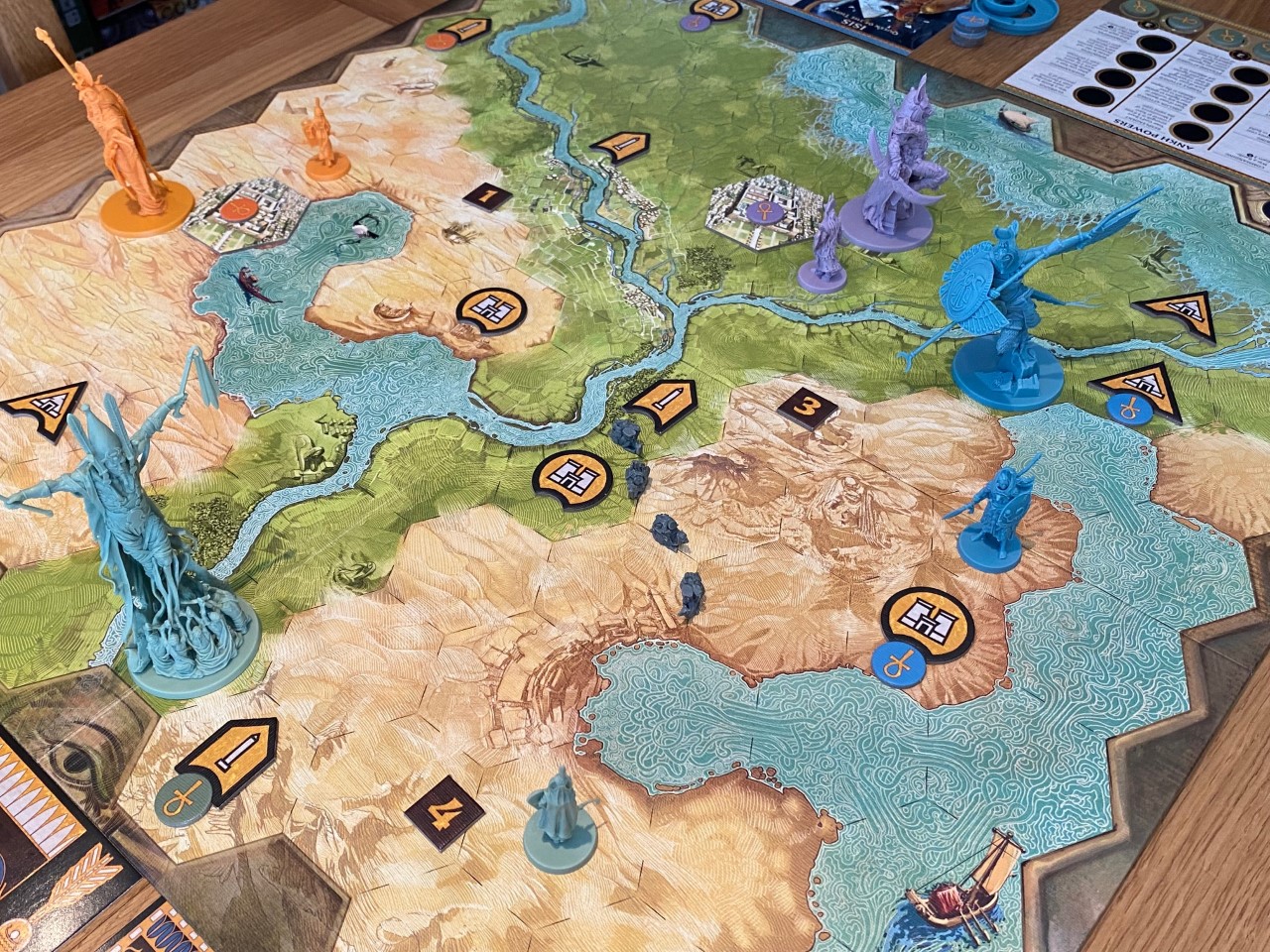 Each action is in itself very straightforward. Move figures allows a player to move all their figures up to three spaces — and they can cross water or move through other figures (but not stop on either water or a shared space). Summon figures allows the player to add one model to a space where they have adjacency, gain followers allows a player to gain followers (which are Ankh’s currency) based on the monuments you control or neutral monuments you are adjacent to.

The final action, unlock Ankh power is perhaps the most exciting — which is almost certainly why it is the last action. In short, a player can pay followers to remove an ankh token from the leftmost space on their player board, and they will then move it to cover one of the four spaces on the column above. In this way, a player can unlock up to six ankh powers (from a selection of twelve available) over the course of the game. 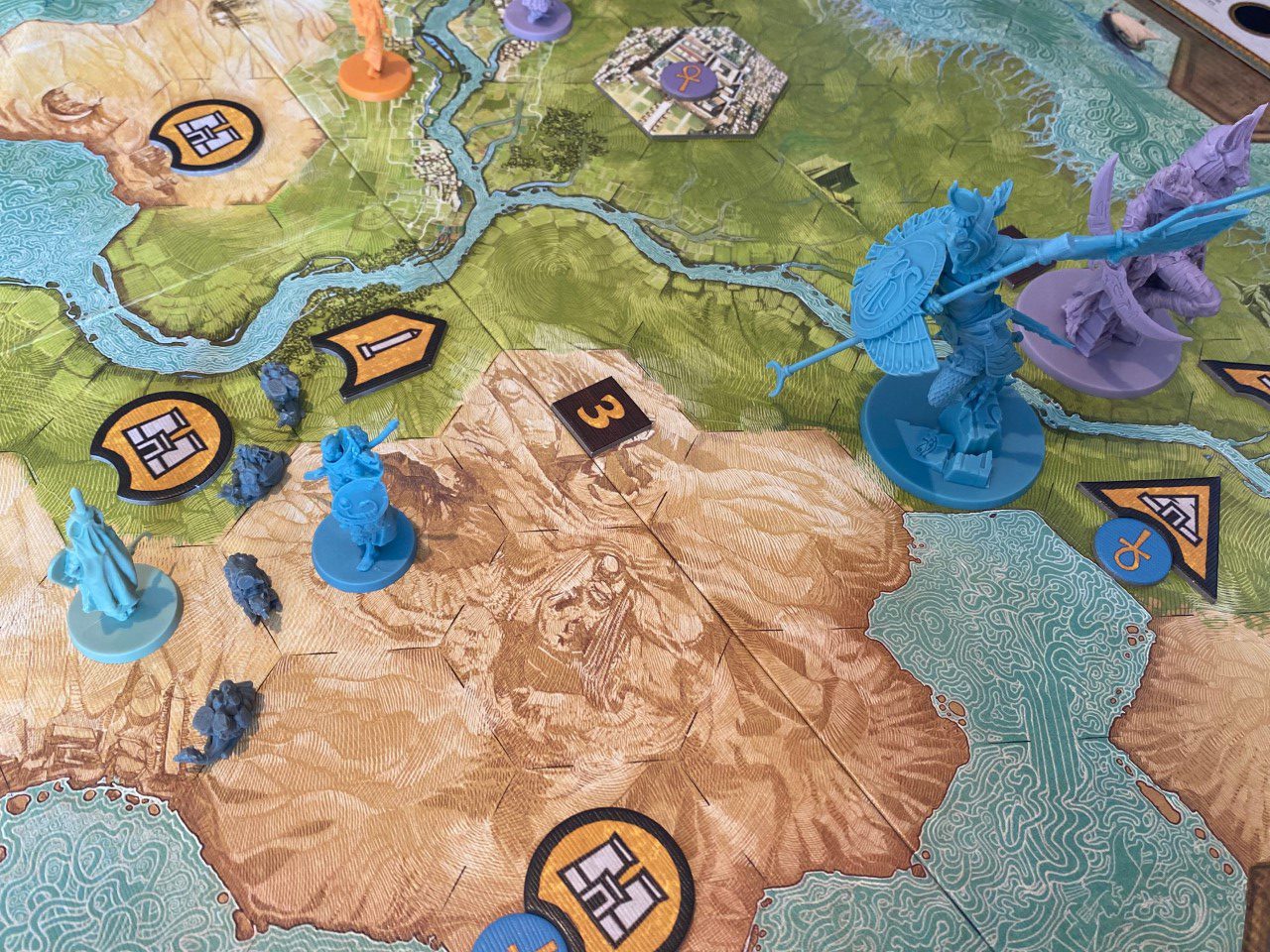 What’s really nice about ankh powers is that even though each God has one unique power (which is available from the outset of the game) printed on their board, the remaining twelve are generic. What makes a God unique is the six (or less) powers that the player chooses to unlock. I can’t tell you how much simpler Ankh is just by having this level of symmetry across all players — it makes the teach so much simpler, and allows the players to decide how they want to develop their God based on their reading of the game, right from the very first time they play.

Aside from gaining access to ankh powers (which do things like allow you to gain more followers when you raise devotion, or raise two figures instead of one etc) whenever you unlock two ankh powers and uncover a scarab, you’ll then be able to add one of the three randomly selected monster figures to your pool — for it to then be summoned later. There are six monsters in the base game (more already in expansions, as I mentioned earlier) split into three tiers, and you’ll play each game with one monster from each tier. All monsters have some combination of special rules and/or add more power to a battle. 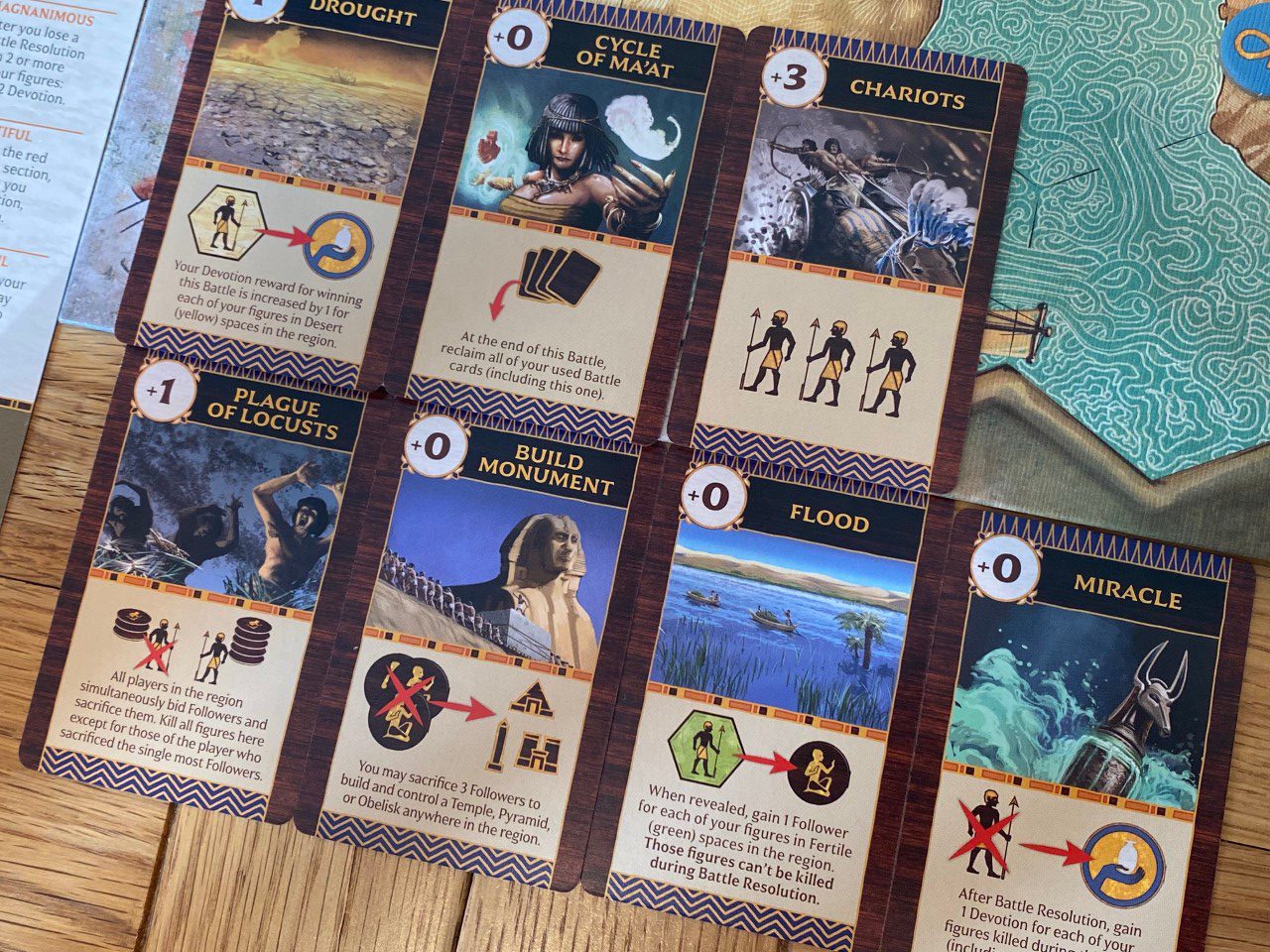 Having covered off actions and also mentioned battles, let’s talk about what happens when one of the action trackers reaches the end of the line — at this point an event is triggered and the countdown is reset. The three kinds of events are to claim a monument, place a camel caravan and do battle — I’ll cover the first two first. In short, claim monument allows a player to claim a neutral monument that they are adjacent to. Place a camel caravan is complex and like merging, it’s a pretty unique feature of Ankh. Placing a camel caravan (of up to six camels) basically breaks up the board — by drawing a line from one barrier (such as water) to another — after which a player will add a region number to the new region and potentially may change the numbers in any/all other regions if they wish.

The reason that players split regions in this way and why the number matters is related to battle events. When battles are triggered, they are resolved in numerical order from bottom to top. Briefly summarising, each player involved in a battle will play a card from their identical seven-card hand — some of which affect the battle, whilst others effectively “feint” it and allow the player to do something else like build a new structure or even move figures to a different battle. Again, all cards are resolved in order, so there’s thought needed to both which region will resolve first and which card you play where. 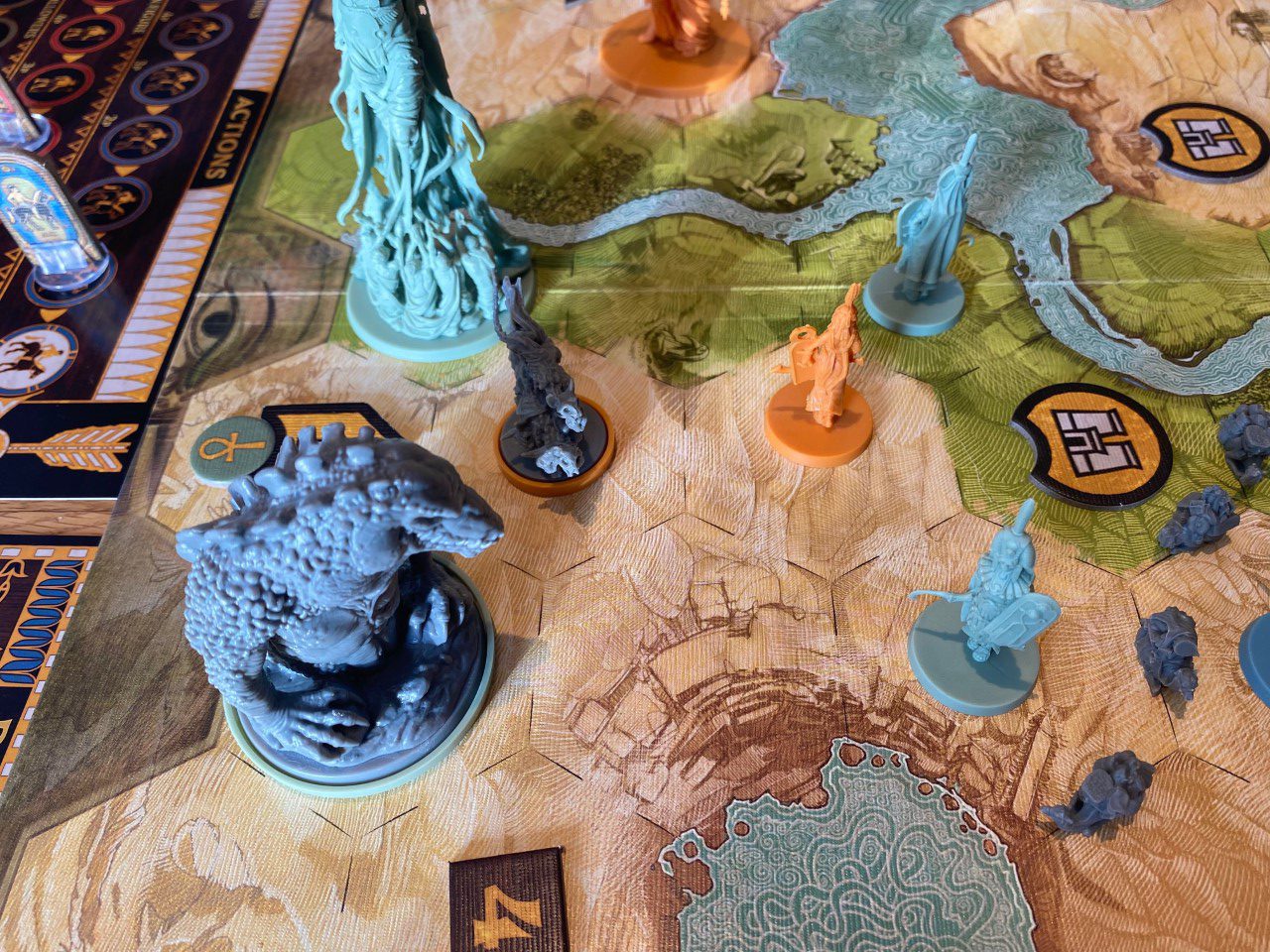 When you take these things together, Ankh has a simple structure with a lot of small, interlinked decisions baked into it. Board presence isn’t quite as important as it is in some area control games unless a battle is imminent, and sometimes you’ll be thinking about positioning your units to build rather than win combat, for example. Some ankh powers also do things like give large bonuses for winning battles, so that drives a very different strategy — perhaps a focus on grouping your troops together a little bit to ensure you can win.

The merge itself is also very interesting to me. Effectively, the last player is eliminated from the game at this point, but by merging with the player just above them, they get to retain their God power and to take one action per turn (as does the other player who merges). For me this is interesting and it does make the merged God more powerful (due to having two powers shared by one team) but it very nearly eliminates the last player. That has to be said — the last player loses their pieces, their score marker and so on, so for some players it is definitely a blow. 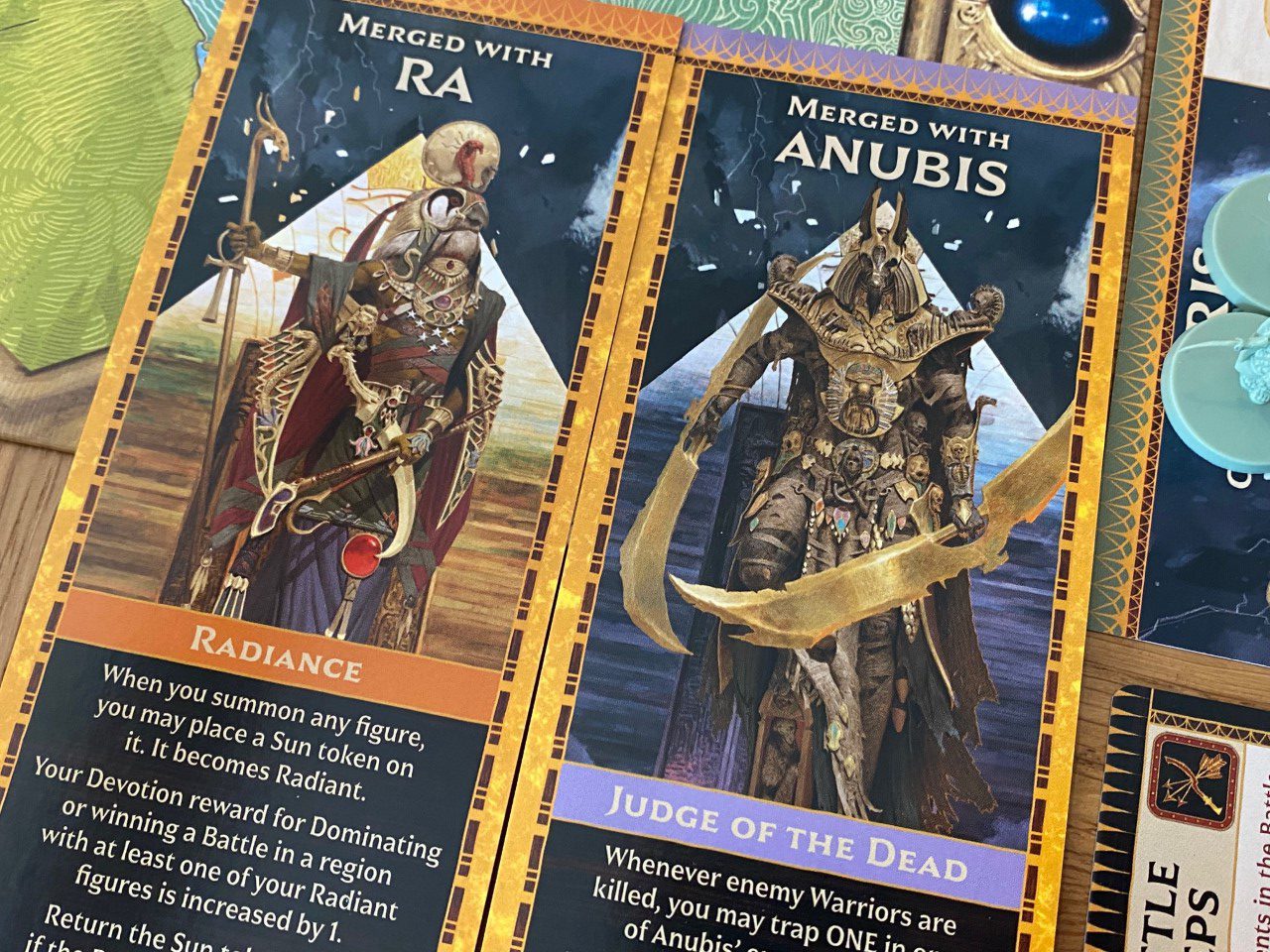 Overall, Ankh is a very solid, very interesting and quite unique addition to any collection, especially when you look at how gorgeous the production is and the table presence that it creates. For me, it’s not as good as Blood Rage in context of this trilogy, but it’s really quite different and so as a standalone product, it’s very worthy of consideration. The merge is the most controversial aspect, but if you don’t like it, there are scenarios in the game that exclude it (and the house rules are now well established) so I would suggest that you don’t let that put you off.

You can find Ankh: Gods of Egypt at your friendly local game store, or if you’re shopping online, feel free to check out BoardGamePrices for the best possible price.