Truck Off review — Stuff yourself

Truck Off is the second game designed and produced by the dynamic duo of Ryan Lambert and Adam Rehberg. It’s a small box game that is packed with bold, bright pieces that are built to an unusually high standard and it delivers a fast, lightweight experience for between two and six players, where at two, a third dummy player would need to be introduced. Most games take around twenty to thirty minutes and simultaneous play keeps downtime to a minimum.

In Truck Off, each player takes on the role of a food truck magnate — an individual on a mission to site their trucks at the most lucrative venues across five rounds of scoring. A simple but interesting dice rolling mechanic introduces an element of luck to the proceedings, whilst a hand of single use cards enable players to influence the outcome for themselves or their competitors in a number of powerful ways. At the end of the fifth round, the entrepreneur with the most money is the winner. 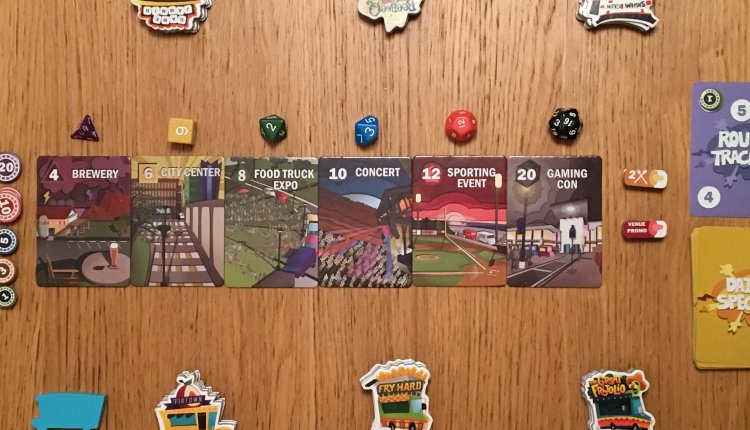 The round structure in Truck Off could not be more simple. Players simultaneously decide where to place their food trucks from among a maximum of six venues (including a brewery and a concert hall, for example) and then roll a corresponding die for each location. Each food truck has a number on the back to represent each location, so once a player has decided where to place her truck, that decision is final. The fifth and sixth venues will only be used at higher player counts, which is a design decision intended to force competition at the venues in play.

The game features a different coloured die for each location, ranging from a D4 to a D20, each of which represents the scoring potential of the matching venue. After each player has placed their two trucks for the round, the result of the dice roll will be shared between any trucks at the venue. For example, the only truck located at a venue will score the full value shown, whilst if three trucks share a venue, then the value is divided by three rounded down, so in this example a roll of ten would translate to three points each (with the final point being lost.) 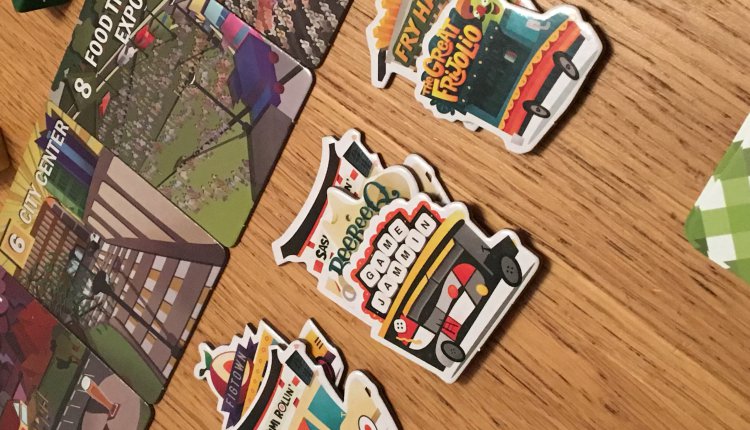 But, before you start dividing up the cash, each player has an opportunity to play any number of cards from their hand. Some allow the re-rolling of dice, whilst others can close a venue or move a truck from one location to another. There are even a couple of options about which cards should be built into the decks, with sweet and mean options indicated by symbols on several cards. This is a great feature, as Truck Off can be played with a focus on take that mechanics, or a complete lack of them depending on your preference.

After all cards are resolved, players take the money they’ve earned and collect their trucks (but not any cards that might have been played) and the process is repeated until five rounds have been scored. Truck Off is really no more complicated than that, which makes it perfect for playing in a casual setting such as a pub or (fittingly) during a work lunch period. The small box certainly helps with this, making Truck Off a relatively portable affair.

Whilst simplicity, speed and portability are chief among the virtues held by Truck Off, it is also a tactically interesting game. The balance of risk and reward when placing trucks is one part of that, but the judicious use of cards is what really tips Truck Off away from being a much shallower experience. It looks fantastic and the components are highly bespoke with a real sense of humour, so enticing players to pick up and join in is simply never a problem.

Ultimately, Truck Off is a great little game that uses a couple of basic mechanics and a lovely theme to deliver a tight and rewarding experience. I guess it won’t appeal to everyone, but almost any collection can benefit from a few shorter games and Truck Off is certainly one that I’ll return to frequently when I want a break from heavier experiences. 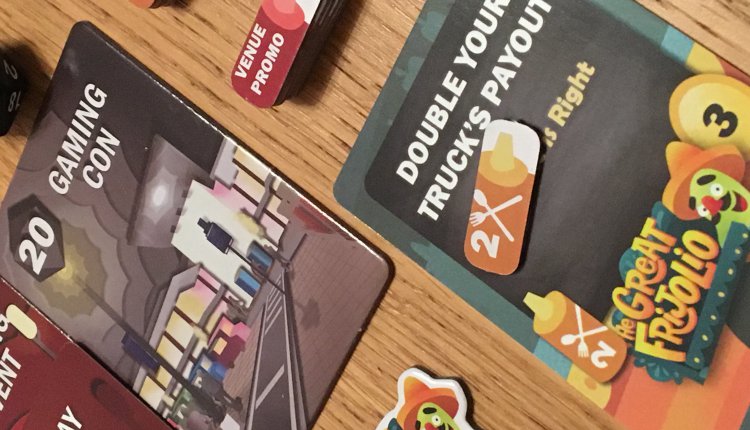