Trekking Through History offers beautiful drafting and set collection for all

Principally, Trekking Through History is a straightforward game. On their turn, all a player will do is take one of the face up cards from the central market (beautifully presented on a high quality playmat). Each card has a date, some beautiful, evocative artwork, a title and some flavour text. There will also be one or more symbols. From a gameplay perspective, the data and the symbols are the only bits that matter — the rest is pure theme. 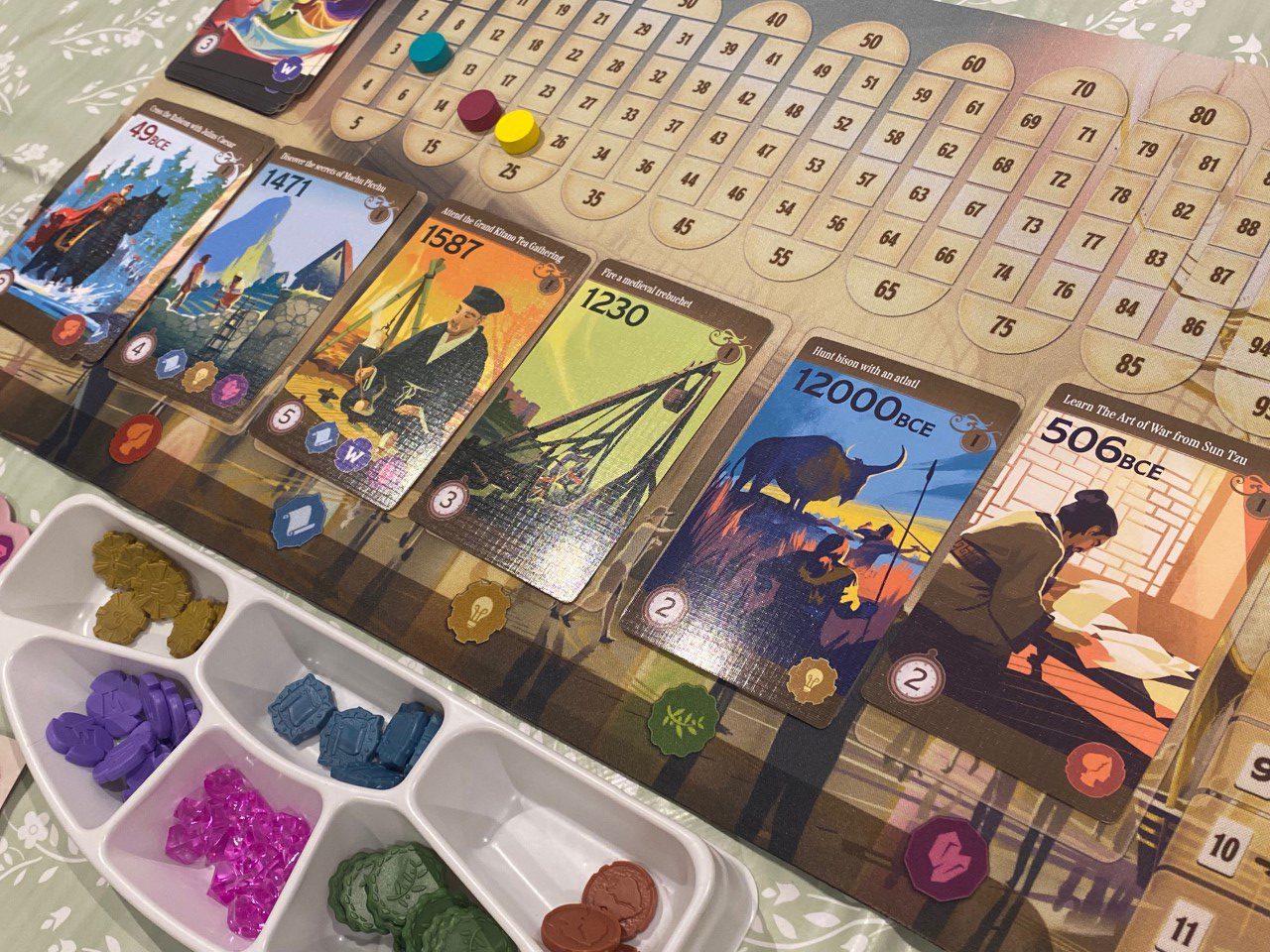 When choosing a card, the active player will usually want to take the nearest forward-dated card available, respective to the cards they already have. So for example if a player previously took a card dated 4000 BCE, then they could take more or less any later card (for example 2000 BCE, 768 CE or 1929 CE).

However, if they were to skip over some cards (let’s say in this example they take 768 CE, skipping over 2000 BCE) then they hinder themselves in two ways; firstly they will potentially reduce the cards available to them next turn (because they can’t go back) and secondly, they will likely reduce the overall size of the timeline — and the bigger the timeline, the more points it will score when it does inevitably end. 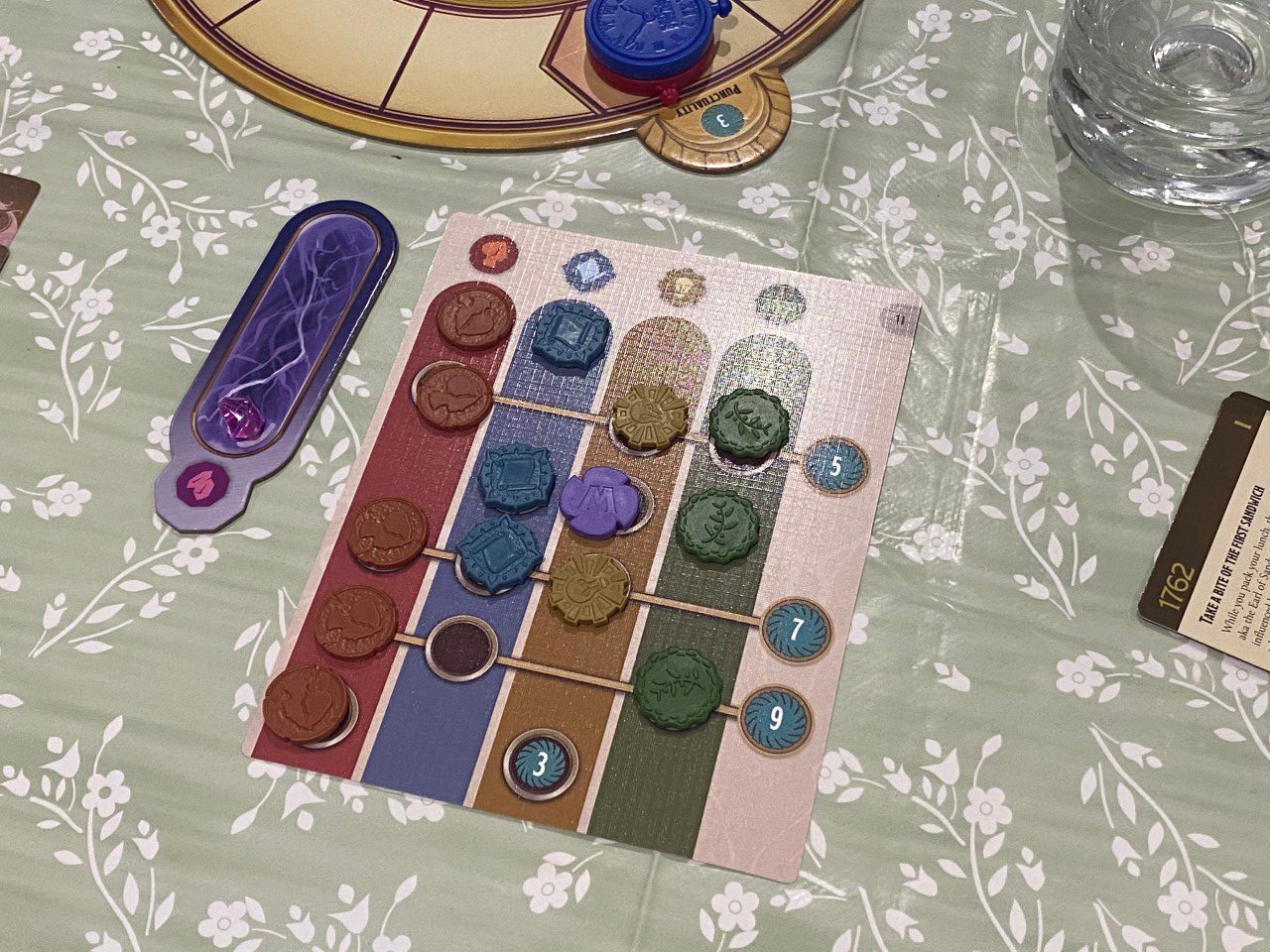 So why would anyone ever skip over a card like 2000 BCE in favour of 768 CE? Well, the answer to that is simply because of the symbols on each card. In addition to the timeline(s) that build out in front of each player as cards are taken, each player has an itinerary board. These randomly drawn cards feature four coloured tracks (red, blue, green and yellow) with various spaces on them. As cards are taken, players can mark off these spaces — potentially scoring points or gaining access to time crystals in the process. So sometimes it might be worth passing over a “closer” card on your timeline just to ensure you get the right tokens to fulfil your itinerary.

There is one other mechanic that I haven’t mentioned yet, and that relates to those time crystals I’ve just hinted at. Card drafting in Trekking Through History doesn’t follow a traditional turn order — instead, it uses a roundel system based on the face of a clock. Each player is represented here by a pocket watch, and when taking a timeline card, a number of spaces (time) must be sacrificed. 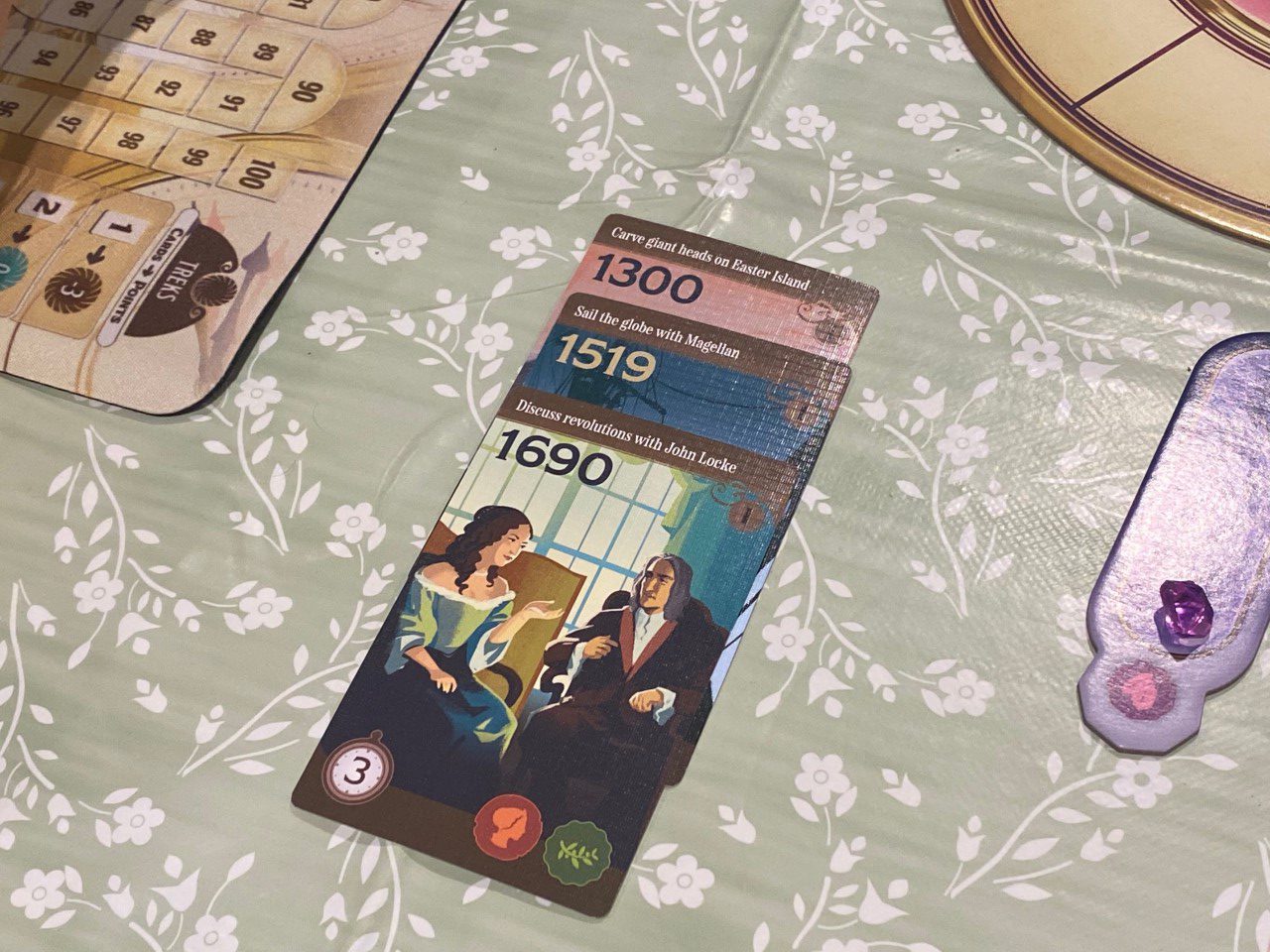 If we go back to the example above, let’s imagine that two players (blue and red) are on the starting space and blue wants to take the 768 CE card. They do so, marking off the appropriate symbols on their itinerary card with tokens, and then adding the card to their timeline. 768 CE costs three time — so they will then move their pocketwatch forward three spaces. Let’s say red now wants to take a card costing two time — which they do — and then moves forwards by two spaces on the clock. At this point, the red player would then take another turn — because blue is still one space ahead of them in the timeline. Time crystals can also be spent here to reduce a cost by one hour per crystal (to a minimum of one).

This sequencing of turns, collection of symbols and spending of time crystals comes together seamlessly in practice, and above all else, it creates for a much more intense and competitive atmosphere than you might imagine for such a beautiful yet passive-looking game. This happens because most of the time, all players are hoping to choose from one or two low-dated cards, so competition for turns is fierce. 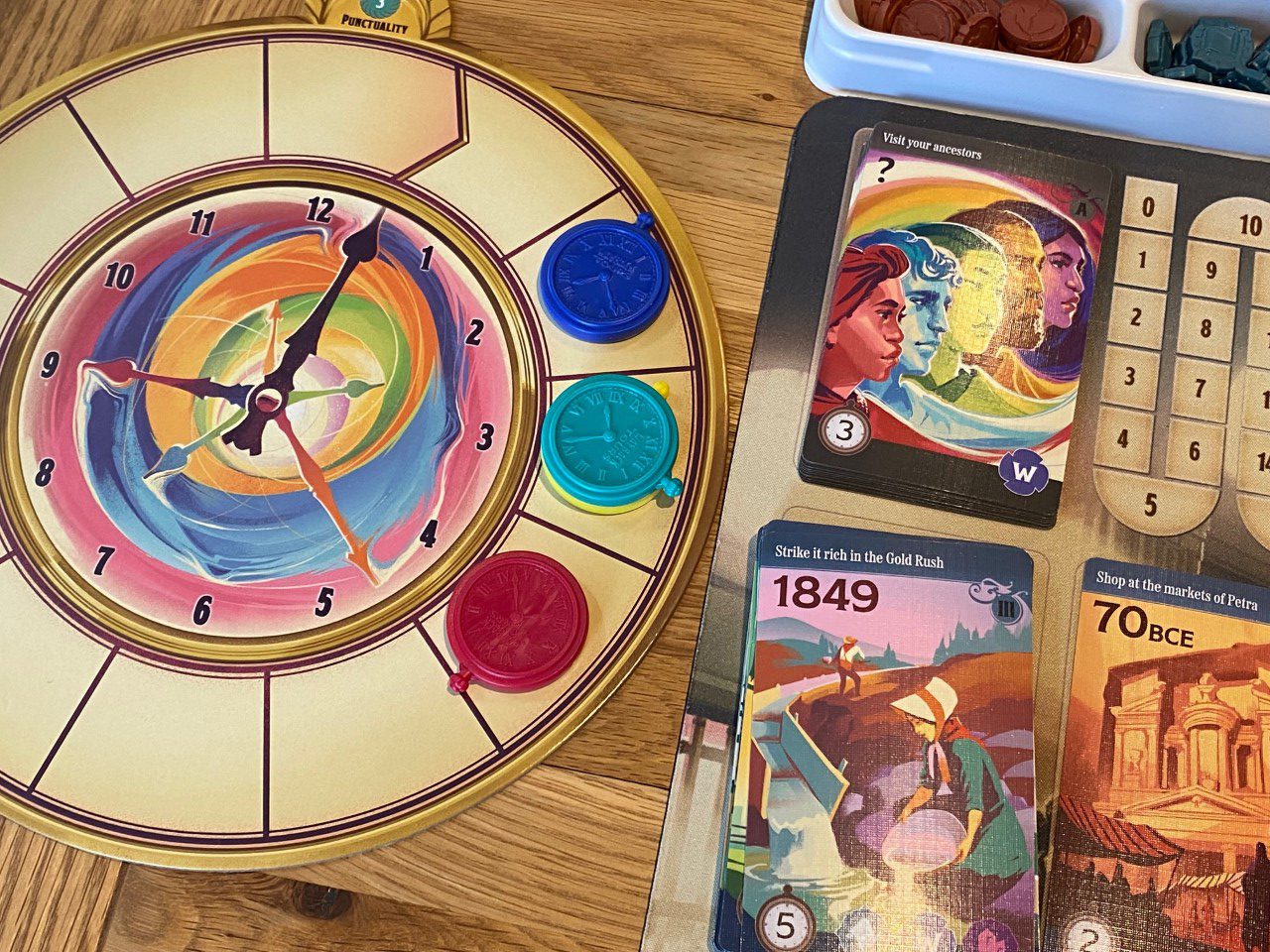 Sometimes a player has no choice but to think differently, and watching an opponent jump five or seven points via their itinerary card (which equates to at least a couple of cards in your timeline in terms of points) can be tough, and it can cause people to rethink their strategy mid-game. Thankfully, there are three decks of cards to work through and an included player aid details all the card dates in every deck — so you’ll always know if a card you want is still in the deck, on the table or already in someone else’s timeline.

At two players, this competition is at its most intense — because the visible cards rotate more slowly, turn order is absolutely critical and it can be quite clear who is winning. At four players, the competition is still intense — but it’s very different. Longer waits and more card rotation between turns takes away some of the feeling of control and planning that is present with just one opponent, but in bigger games it becomes even more critical to time use of your crystals, or to push for an immediate second turn. 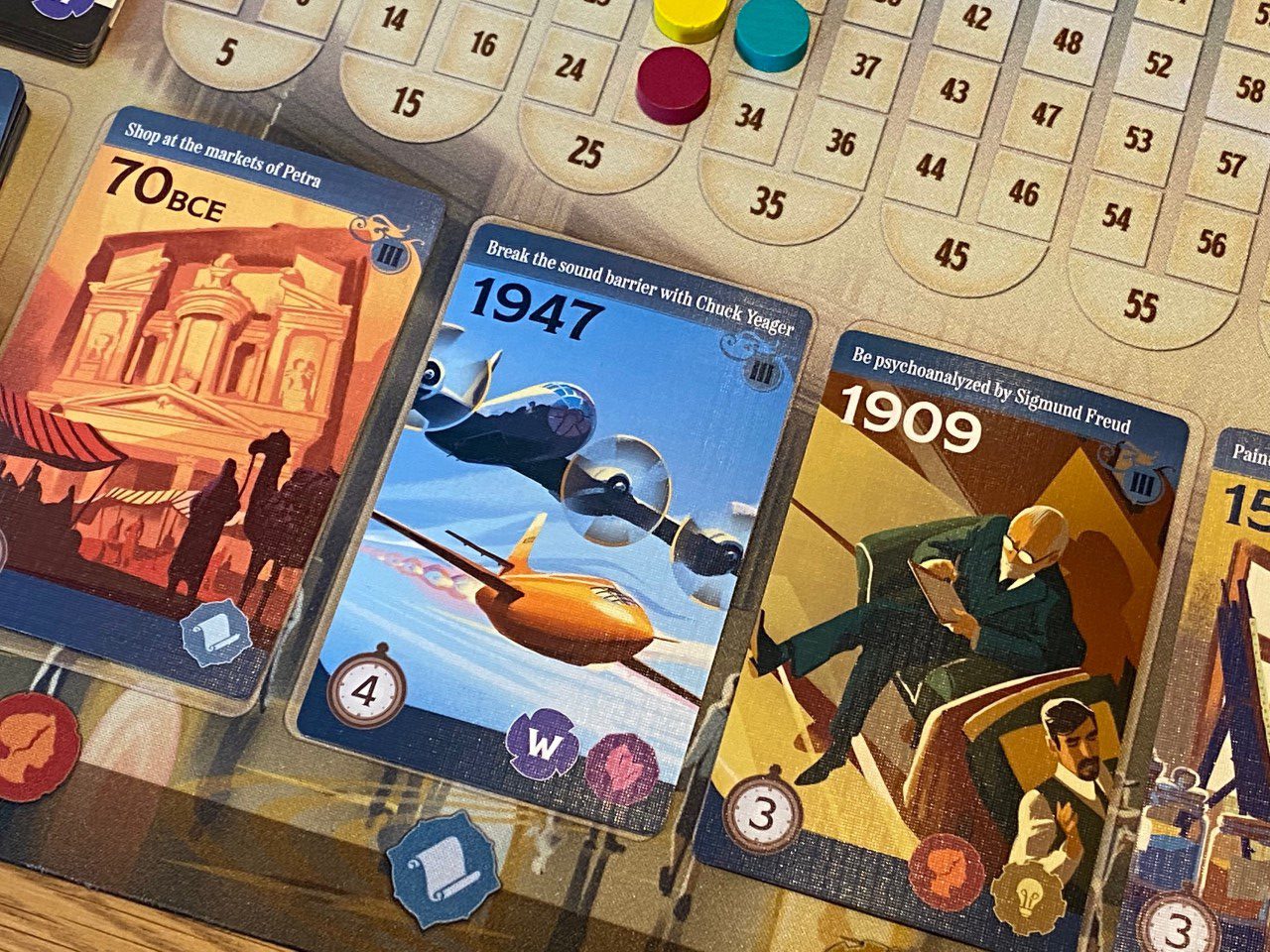 From how it looks and how simple it is to teach, through to how the three different core mechanics integrate with each other and the theme, I really enjoyed Trekking Through History. Some players commented on the fact that the itinerary board felt a bit like an unwelcome add-on (and theoretically it could be ignored for a much simpler game) but I think for hobby gamers it adds another dimension to the basic drafting of a sequential timeline.

We also noted that Trekking Through History uses symbols and colours on the different tokens/symbols, but one colourblind player still struggled to differentiate between two of the colours. I give Underdog Games credit for including textured symbology on their tokens, but the problem is that because the tokens are single-colour plastic, it remains hard to see the symbol shape. So just bear that in mind if you do have players who might experience this within your group. 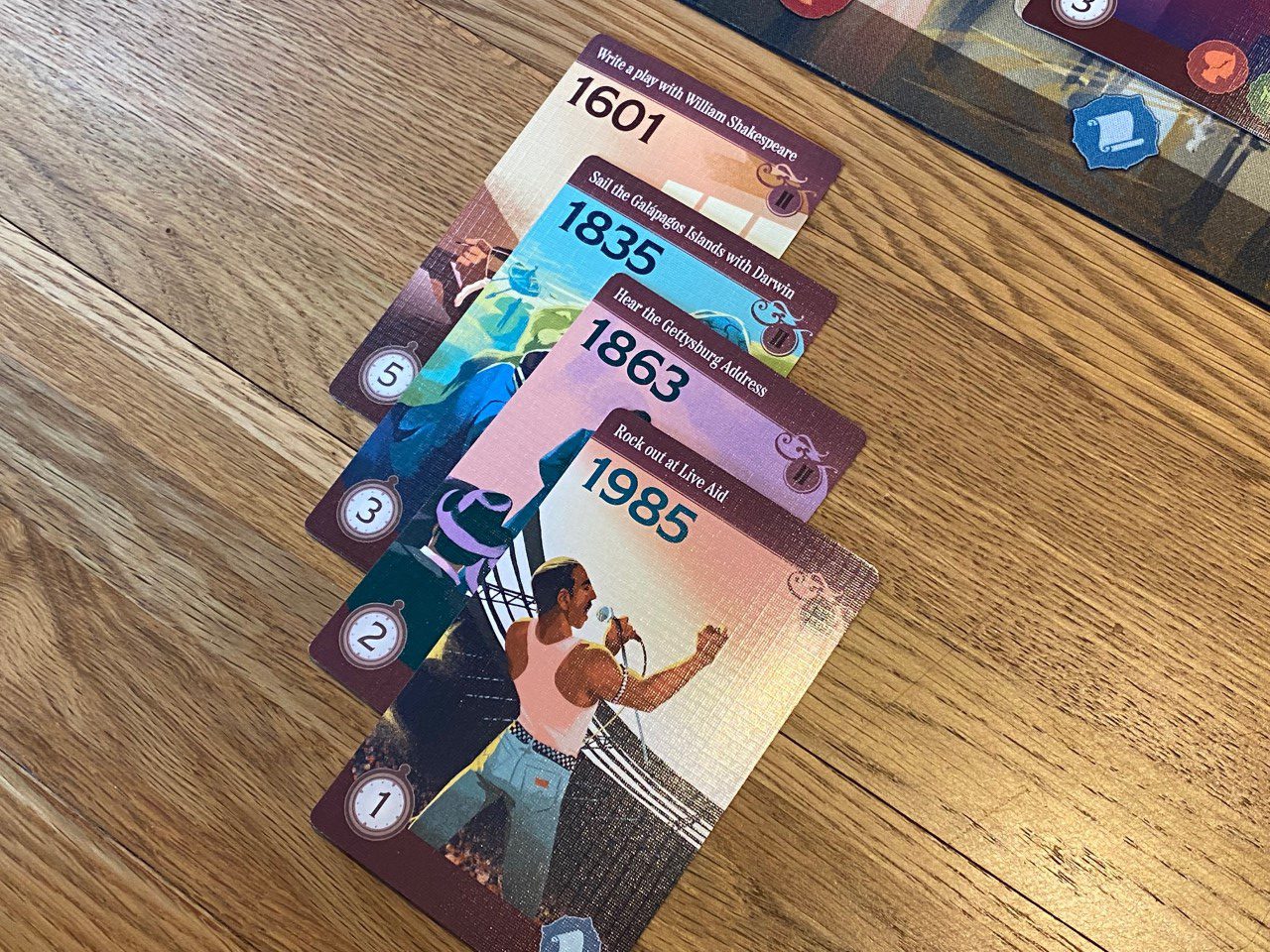 Minor criticisms aside, Trekking Through History is a really fantastic overall experience. It’s extremely attractive and very well made, so players feel immediate warmth towards it. This is then enhanced by the interesting subjects on cards (which are not always what you would expect) and the flavour text that accompanies them. The mechanics then build further on this by being simple enough to teach, but with a decent level of emergent depth as understanding grows.

Trekking Through History never reaches a depth that will make it an all time classic, but as a gateway-plus experience, it makes a superb addition to any collection. My kids are a little young for it, but I would also suggest that it’s a fantastic choice for players in the ten-sixteen years kind of age range.

You can purchase Trekking Through History on Amazon.