Cake of Doom has you bribing countries with cake

Everyone loves a good cake, don’t they? In Cake of Doom, you have to bribe entire continents to be yours by giving them tasty, tasty cake. It’s a short game, for three to six players, that is full of sabotages, cakes to bribe and a lot of strategy within its cute cards. It’s a game that starts to feel really intense about midway through, where you are sort of working with other players one moment, then trying to outbid them and stop them the next.

Each player in Cake of Doom is given a set number of cake cards and sabotage cards to start the game off. Everyone is also given an alien card, which gives you a special ability. Some aliens make it so that you cannot steal a card from that player’s hand, while others allow you to draw an extra card at the end of your turn. In the middle of the play area, a bunch of continent cards are placed, again depending on the number of players. These cards are the regions you want to bribe using cake. They each have a several number on them, indicating the minimum number of cakes they will accept. 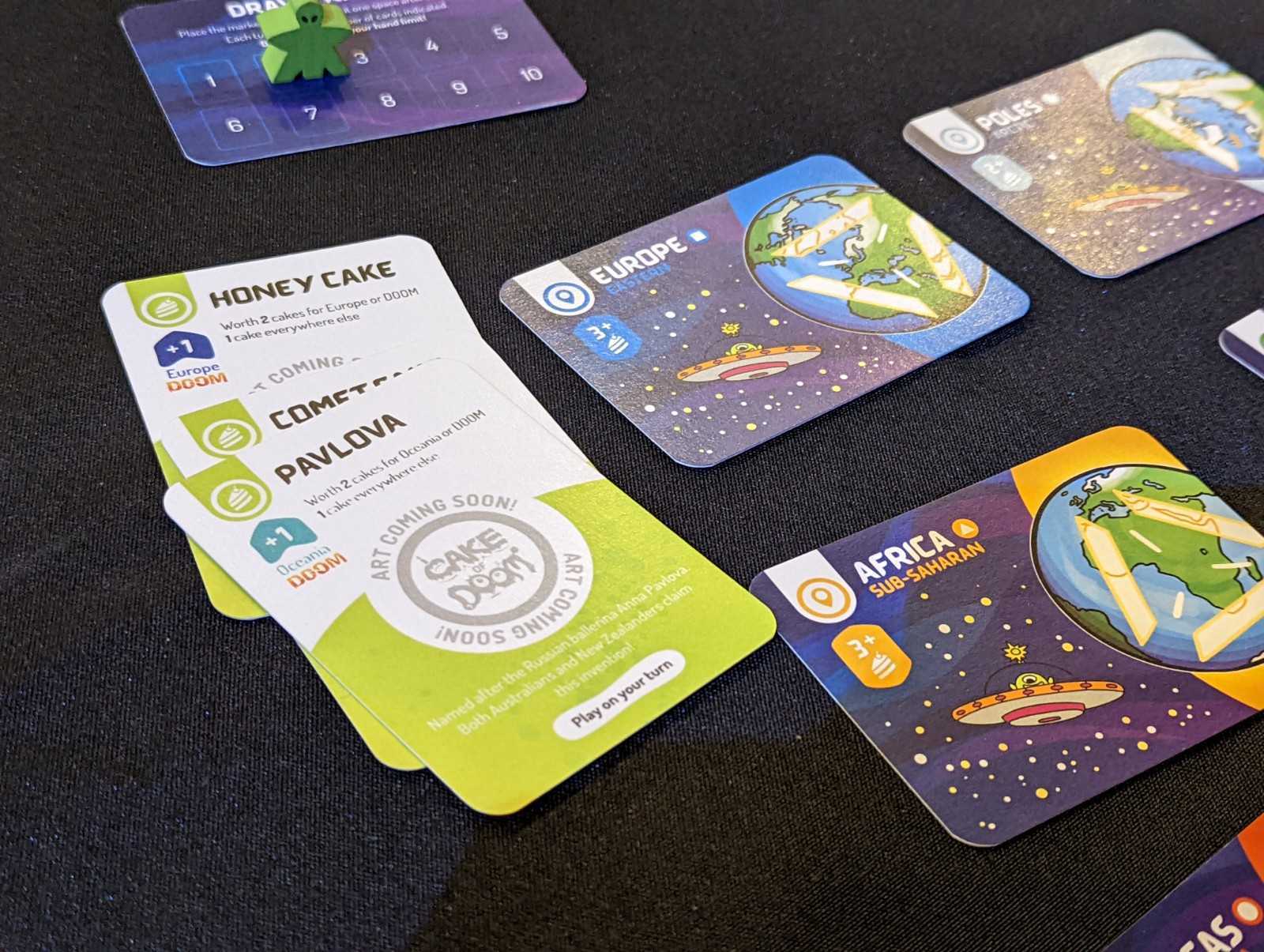 There is also a DOOM card, which ends the game. You need to have two regions on your side before you can bid on the DOOM card, but if you get the DOOM card, you win and end the game. The cakes in your hand aren’t all equal: Some cakes are worth double for specific countries, which can really help you get a high bid there. On your turn, you start off by playing any blue sabotage cards you have, as they count as action cards. These cards allow you to steal from another person’s hand, grab from the discard, etc. Then, you can start bidding on a country. This is done by placing at least the minimum number of cake cards on that country’s card. 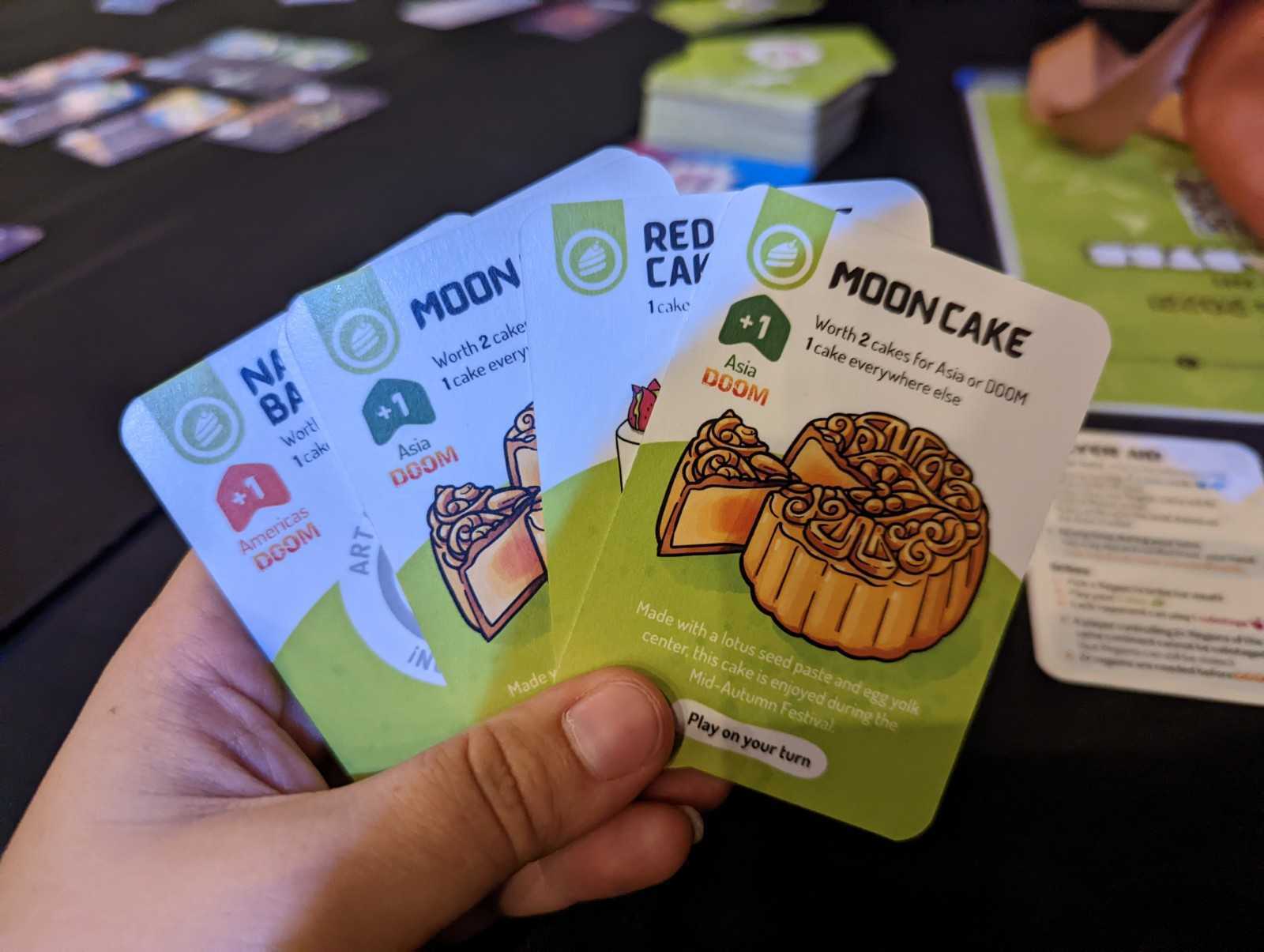 Then, once you have made your bid, the other players are able to play one sabotage card each. If players get you below the minimum number of bids, you lose that country. You do get back any cakes that they didn’t destroy with sabotages though, so it’s not all bad. And, as each player can only play one sabotage, placing a higher bid does make it so you are more likely to be safe. At the end of your turn, you will then draw cards from either the Cake deck or the Sabotage deck — it’s up to you. The number of cards you draw at the end of your turn in Cake of Doom depends on the round. In the first round, you only draw one, in the second, you get two, by the fifth, you are grabbing five. There is a ten card hand limit, but we found ourselves spending loads of cards on bids, so this wasn’t ever an issue for us. 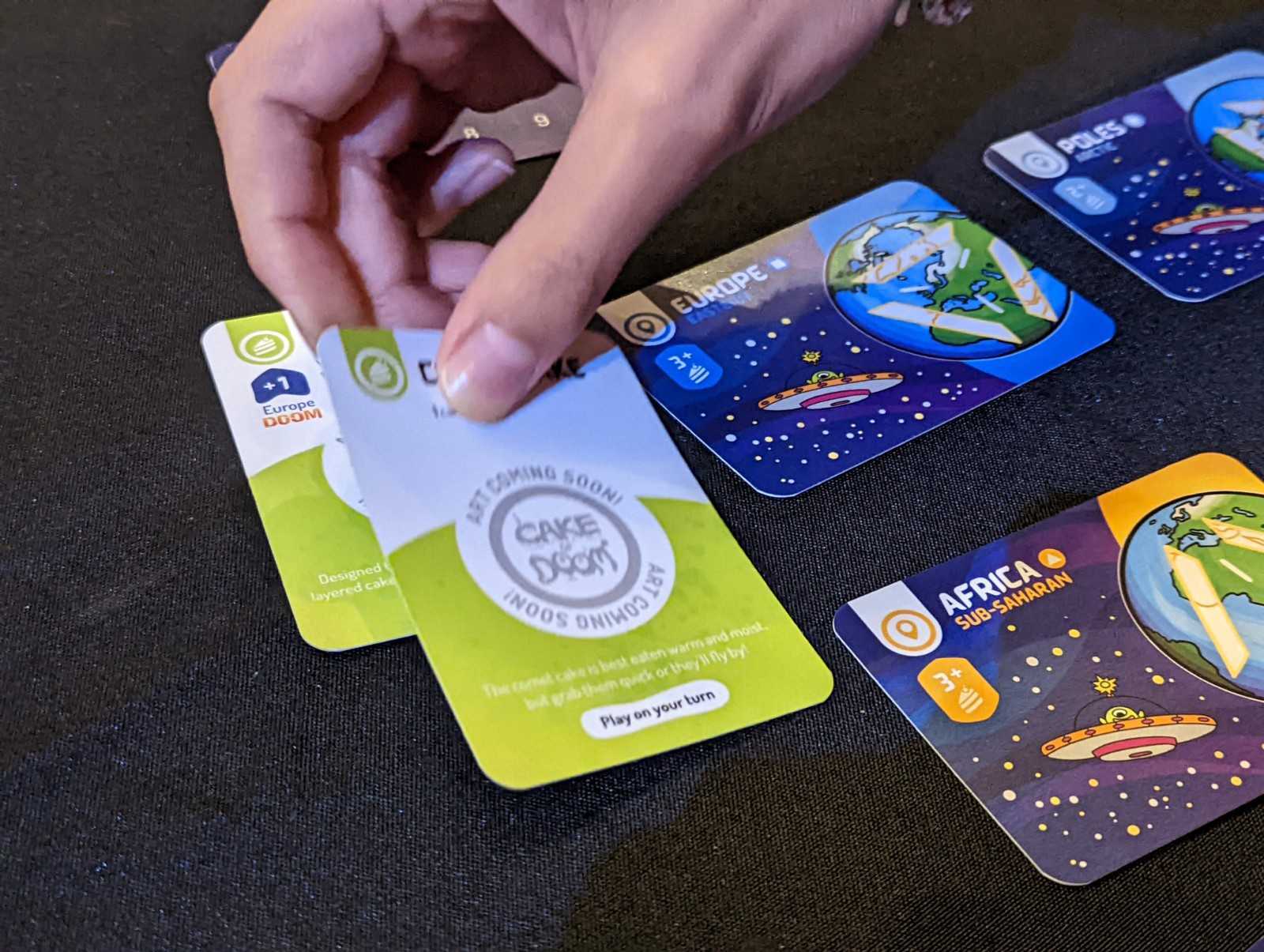