A tsunami destroyed your home and submerged all land far beyond where the eye can see; There’s only one choice, you and your buddies must search for land — as Trash Sailors — and survive off the debris from before.

Cooperative games come in all shapes and sizes, and the most memorable ones often force players to work together by alternating duties within very limited spaces. Games like Guns of Icarus and Overcooked have you swapping places, changing things out and often challenge you to do so in an environment that is changing in one way or another. Trash Sailors does this part of it all incredibly well, but it also does a great job of having it so that there are plenty of things to do for everybody on board.

The raft is the most important part of each Trash Sailors’ run. Regardless of how many of you there are, you need to defend it because if it gets too damaged then it’s game over. Enemies, in the form of crocodiles, sharks or even pirates, will try and rip it to shreds, and to stop them you’ll need to build weapons, repair the raft. You’ll do this while also trying to keep it fueled too — run out of fuel and it’s easy to get overwhelmed. But, how do you get the fuel? Through fishing.

Fishing is fundamental, it’s incredibly easy to do (walk to the edge, press a button to cast, then click to pull the goods in) but in order to maximise your haul you’ll want to make sure you’re fishing the right pieces of trash out of the water. At the foot of your mast is a machine that creates raw resources from gathered goods, however, if you hand in the trash in the right order then you’ll get a bonus. This is essential when it comes to making the most out of the peaceful moments… although those are few and far between because aside from all of the above you’ll also need somebody to steer the ship so that it doesn’t careen into mounds of trash, trees, obstacles or traps.

Steering is simple, somebody either grabs the wheel and steers or jump up and down on either side of the ship. The latter might sound a bit silly, but when you’re battling toxic sharks at the edge of your boat and you’re all busy it can be a real, literal lifesaver. That said, the default jump button, right alt, is a bit of an odd choice for a keypress, but, to each its own. 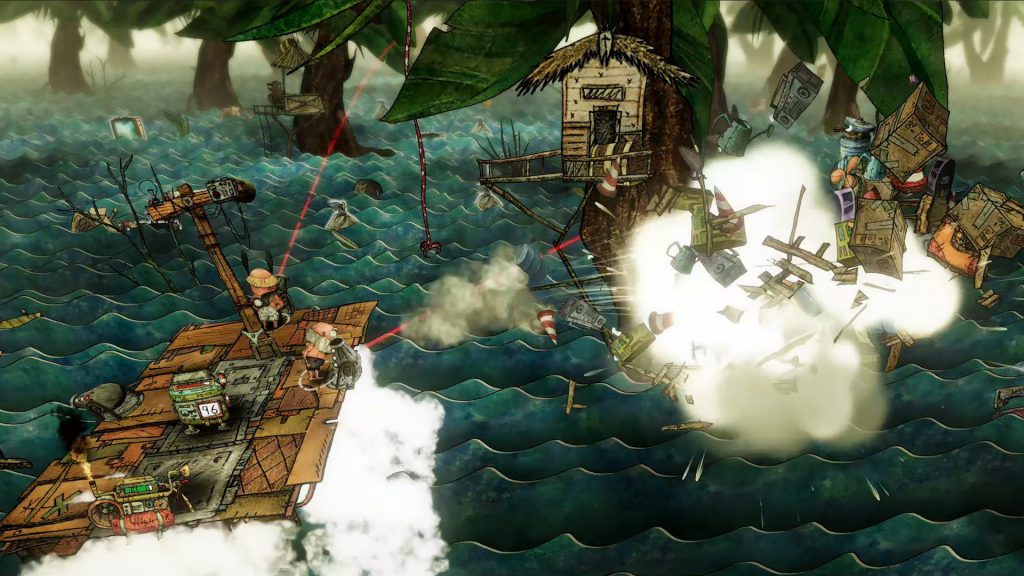 There’s a pretty decent single-player campaign. It does a great job of introducing new mechanics and enemies at a steady pace — you certainly don’t start out with the task of taking out sharks with cannons, that comes later. However it all really comes to life when you play it in multiplayer, be that local co-op or online. Yes, that’s right. Online. I’m really glad that the team made the effort of making Trash Sailors’ gameplay compatible with online, while couch co-op is definitely back and in fashion, it is great to be able to play a quick game with some friends who don’t happen to be at your house.

I can’t wrap up this article without talking about the art style. It’s a beautiful looking game, with a bold-outlined, hand-drawn art style that is instantly memorable. The team have done much more than that though, because the way that they play with lighting — when nightfall is coming, or when lighting crashes to the waves in a storm — is an absolute triumph of visual design and I desperately hope that I’ll see more games with this art design and level of style, in the near future.

Trash Sailors is available on PC