My time with Dead Static Drive

The conundrum: How do you classify an article written about a game that is so early in production, it has little to no gameplay mechanics? It’s not really a “Preview” or my “First Impressions” of the game, it’s earlier than that… Dead Static Drive is just such a game. It’s a pre-alpha… only slightly more than a demonstration of an idea that could one day become a game – and yet, I’m compelled to bring it to your attention. 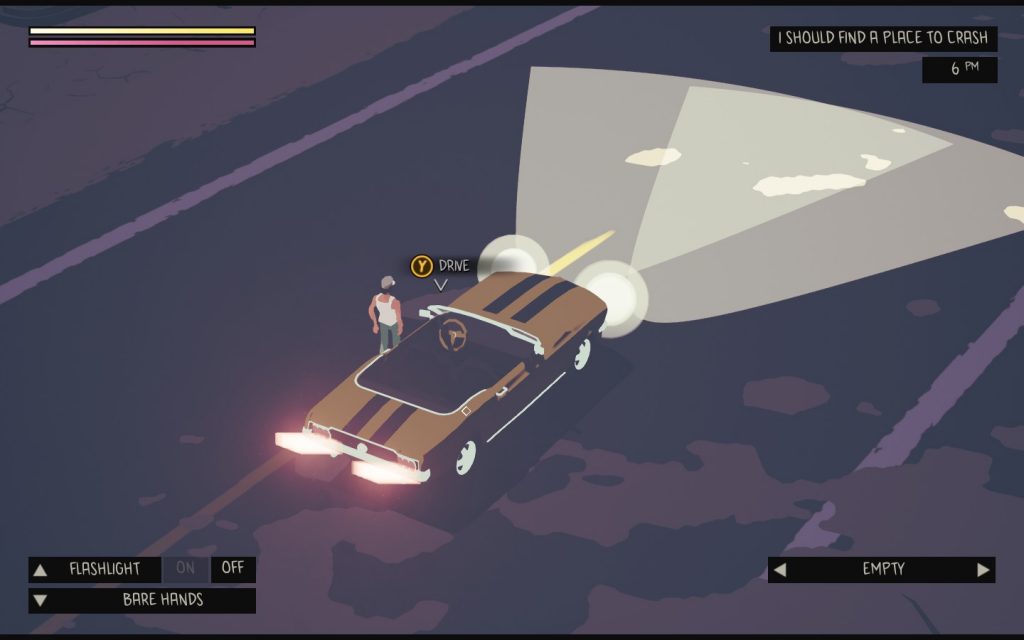 So why bother mentioning it at all you may think? Well personally I like to hear about new, promising indie games as soon as I can, and this site is catered towards indie games and indie gamers – so why not mention it!? Dead Static Drive may be very, very, early in its development, but already there are some great things within it.

It plays as a 3D 3rd person survival game, in which you (currently) start off in a car on a road in the desert with the task of finding somewhere to crash for the night. You drive along the road until you discover a few buildings that make up a motel complex and petrol station. Getting out of the car zooms the camera into your character as you explore the area picking up the plethora of weapons that are scattered about the place (demo, remember that this is a demo!). There are people dotted about that you can’t currently interact with, and some weird moose-head skeleton looking dudes that attack you if you get close.

Basic controls are in and work well, if you use a controller – the mouse/keyboard combo is a little confused at the moment – but the controller works well, allowing you to run, walk, pick stuff up, aim and shoot, change weapons etc perfectly. Car physics are awesome too – clip a rock at some insane speed and you are flipped and rolled, spun and flung all over the place! It’s great fun and I spent quite a lot of time just doing this, trying to get a good screenshot! Do it too much though and the car will explode, instantly killing you and restarting the demo.

There are some excellent lighting effects, especially the car headlights and the muzzle flash from your gun. Actually all of the graphics are very good – presented in a low polygon style reminiscent of Another World but with more of an artistic feel, similar to the Wild Eight. Most of the daytime graphics have sepia overtones and the nighttime graphics are dark and spooky, which create a great atmosphere when coupled with the floaty ambient background music.

The to do list is, obviously, very long – but Dead Static Drive looks to be shaping up into a very interesting title. The developer is very active on twitter, so I would suggest following him to get progress updates – and of course we will be bringing you all the coverage we possibly can too!