The original Zombicide occupies a bit of a strange place in the modern board game canon. With over two million copies sold in just under ten years, there is no doubt that its commercial success is testament to its appeal. However this same appeal — primarily aimed towards casual gamers — seems to alienate the more traditional board game audience. That said, all that really matters to me is whether or not the brand new Zombicide: Second Edition is fun or not.

Before I get too deep into the details, I guess I should cover a couple of areas. Firstly, what Zombicide: Second Edition is actually all about and secondly, how it differs from the original Zombicide. The first of these things is easy and I’ll explain that in a moment, but the second is more difficult, because there are actually quite a few differences between the two versions — from rules minutiae that only a die-hard fan would really notice, through to some of the more significant component changes. 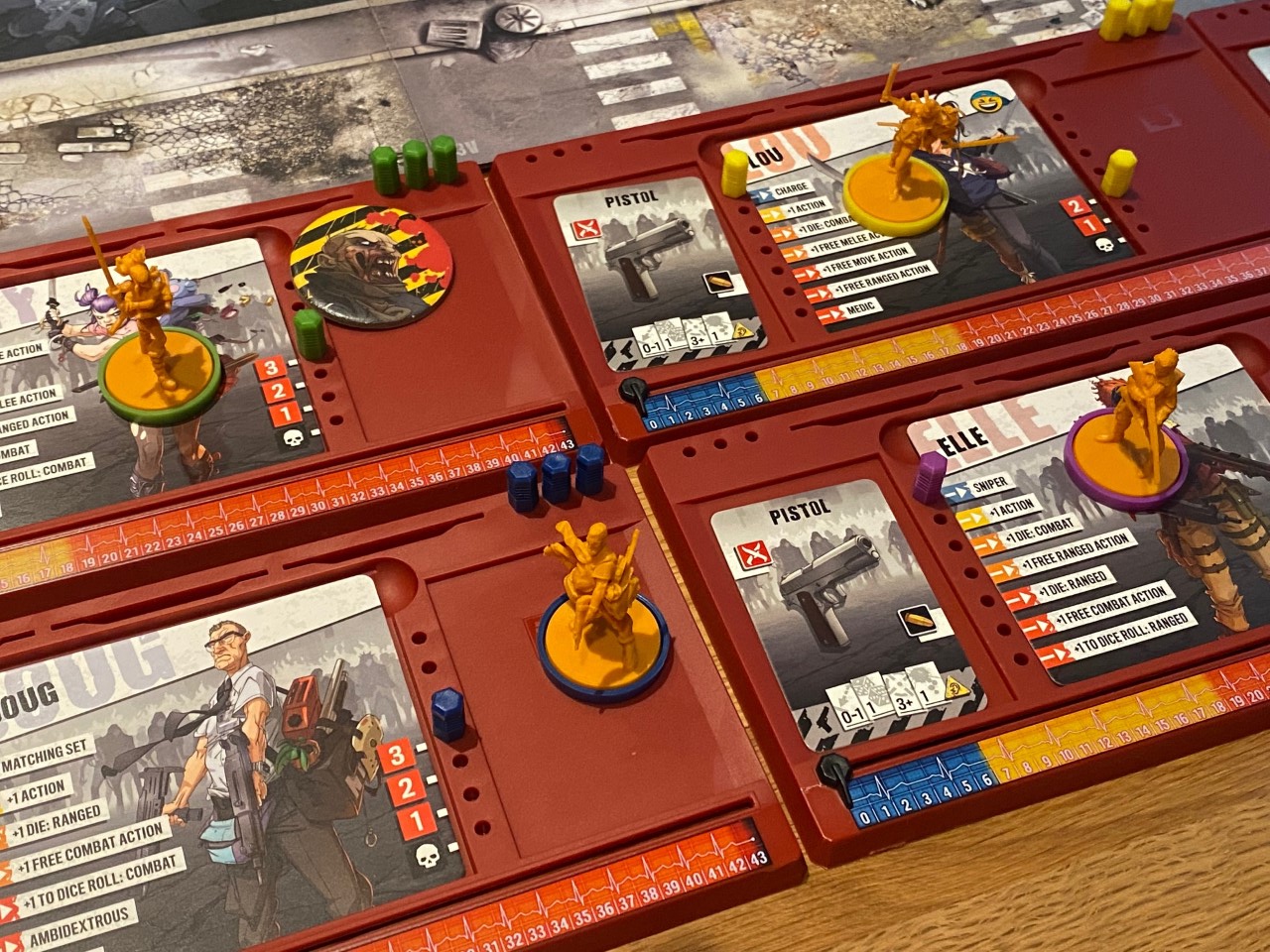 So, what is Zombicide: Second Edition? Simply put, it’s all of the action-orientated zombie movies you’ve ever seen, all rolled up into one. With something like twenty-five scenarios to play through, twelve survivors to play as, and numerous expansions likely to follow (not to mention backwards compatibility with existing stuff) there’s certainly plenty to go at.

The actual content of each scenario varies, but one of the original Zombicide’s main selling points was that of the fact that it was fully cooperative — with a competitive edge. Most dungeon crawlers released prior were based on a “one vs many” model, where one player controlled the evil forces, and a number of teammates opposed them with their individual heroes. Zombicide: Second Edition is no different, with the players splitting six survivors between them in every mission, and the zombie enemies being controlled by simple rules of engagement. 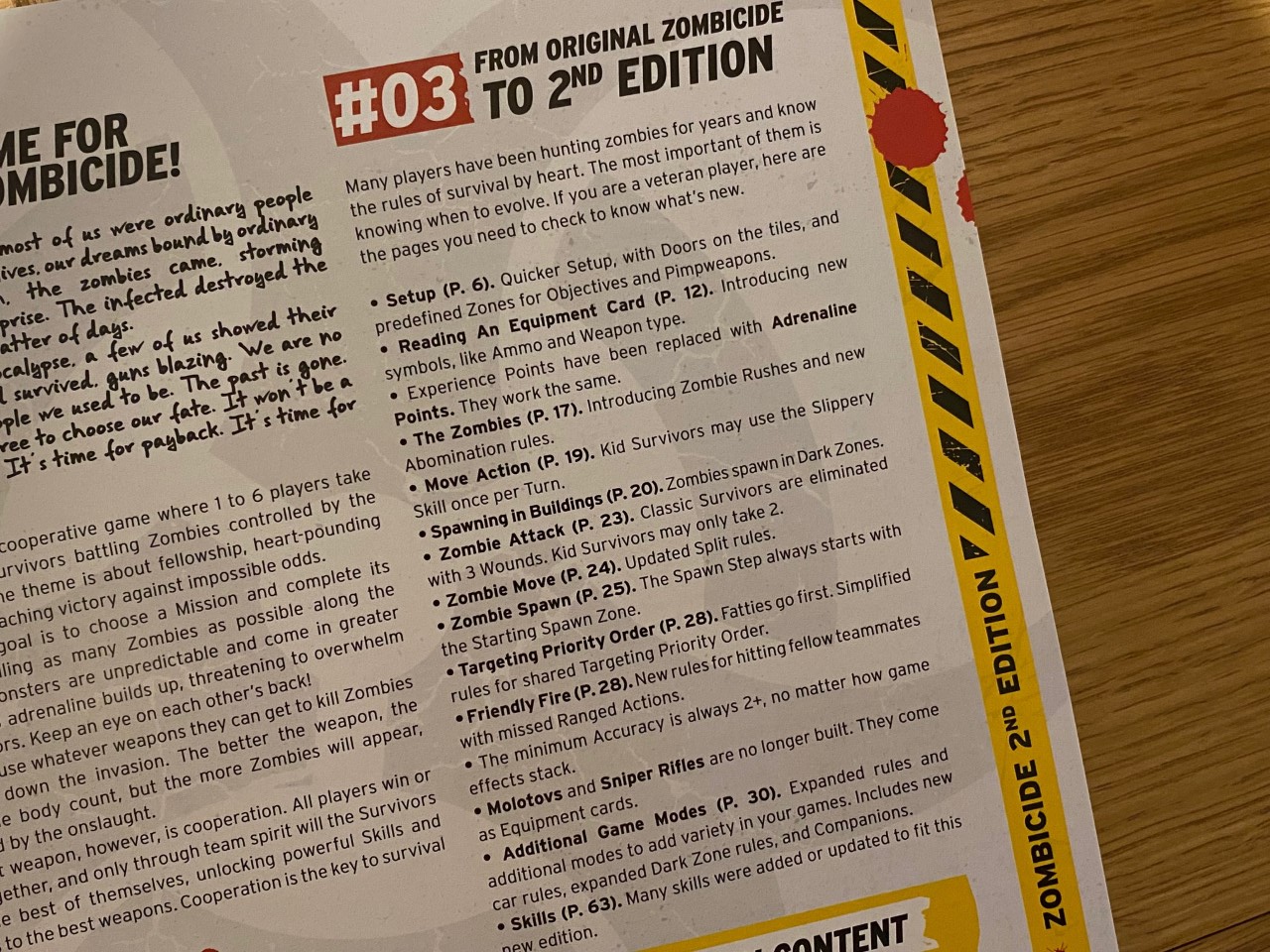 In most cases, the survivors will be tasked with getting from their starting location to somewhere else on the board, but before they can win, they’ll have to collect a set amount of loot, rescue some survivors, or achieve the old favorite of “collecting samples” from certain enemy types. Whilst the scenarios are loosely connected by a brief story, items and experience do not generally carry over, and players can dive into any scenario they want without really missing out.

In terms of how Zombicide: Second Edition improves upon — or at least differs — from Zombicide, the changes are significant. Some of the more obvious changes are non-contentious. For example, in later standalone variants of Zombicide (I think beginning with Black Plague) CMON introduced plastic player dashboards that were not present in the original game. These are now included in Zombicide: Second Edition. 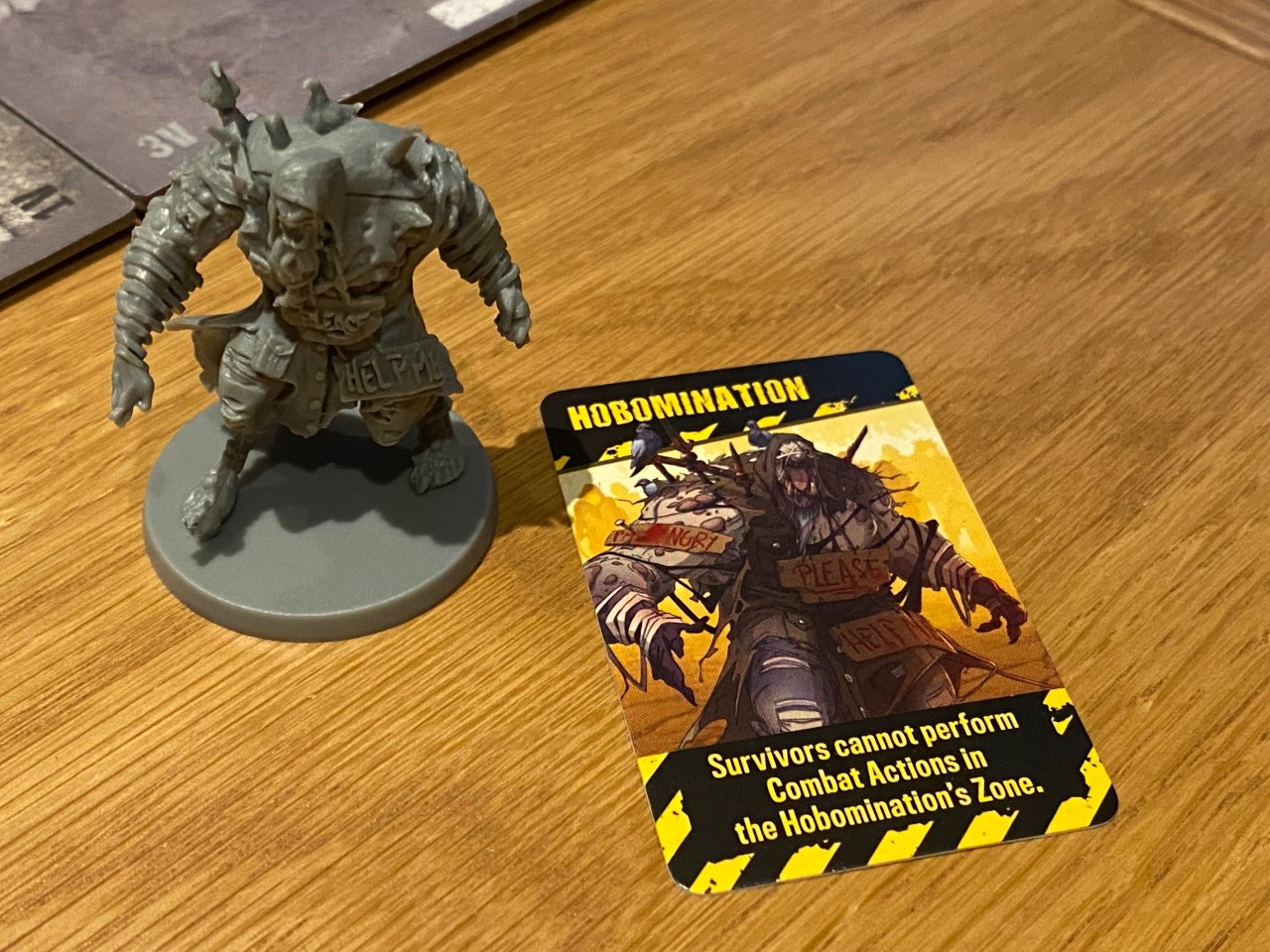 Also in terms of new plastic, there are a number of new survivors — including six children. I’m honestly not that keen on this inclusion, although in gameplay terms, it is justified by a new “slippery” mechanic. This basically allows the younger characters to escape from a zombie-occupied space without penalty, which in turn helps to negate their much lower hit points. They definitely offer a unique challenge, but I find it a bit distasteful, honestly.

Moving on, there are numerous welcome changes that simplify the rules or board management. For example, doors are now pre-printed on the board in most instances, and once opened, you just place an open token on them. One big change is that most board tiles now have buildings with “Dark Zones” in them — these cause a zombie spawn card to be drawn upon first opening a building, resulting in a lot more action and some tough decisions to make about when and where to enter a new building. Old rules for zombie movement that were either unclear or abusable have also been changed. 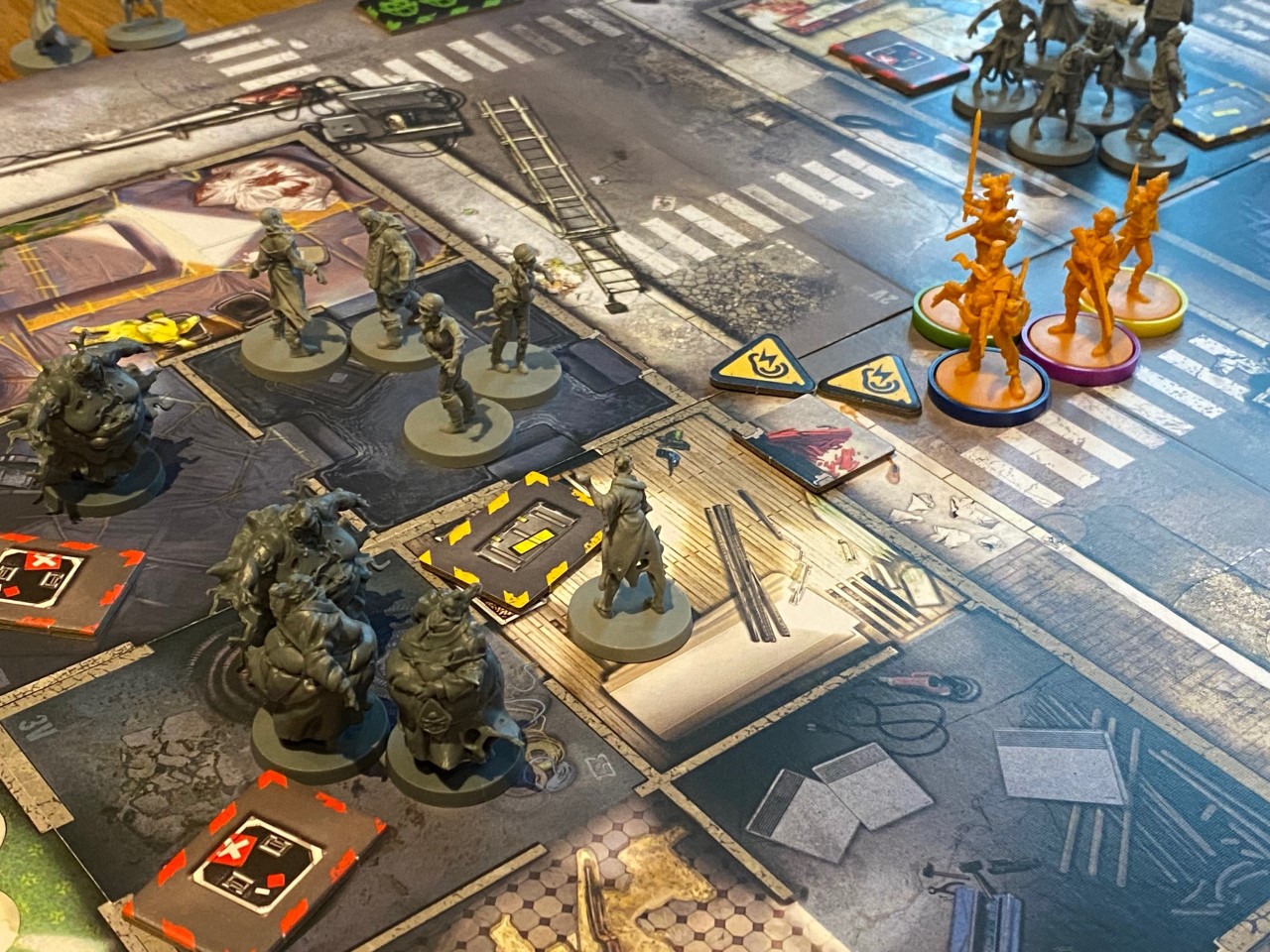 If I were to summarise the net effect of these changes as best I can, based on about five or six games of the original Zombicide and perhaps the same of Zombicide: Second Edition, I think I would say that they have the desired effect. Zombicide: Second Edition is a slicker, more up to date game, that flows in the way you intuitively feel it should, and therefore there is less need to look up rules minutaie.

More importantly, but perhaps harder to put into words, Zombicide: Second Edition is just massively fun. I think the last time I felt this much excitement in a dungeon-crawling style game, it was probably HeroQuest or something like that, which will have been as much to do with my youthful enthusiasm as it was the quality of the game. 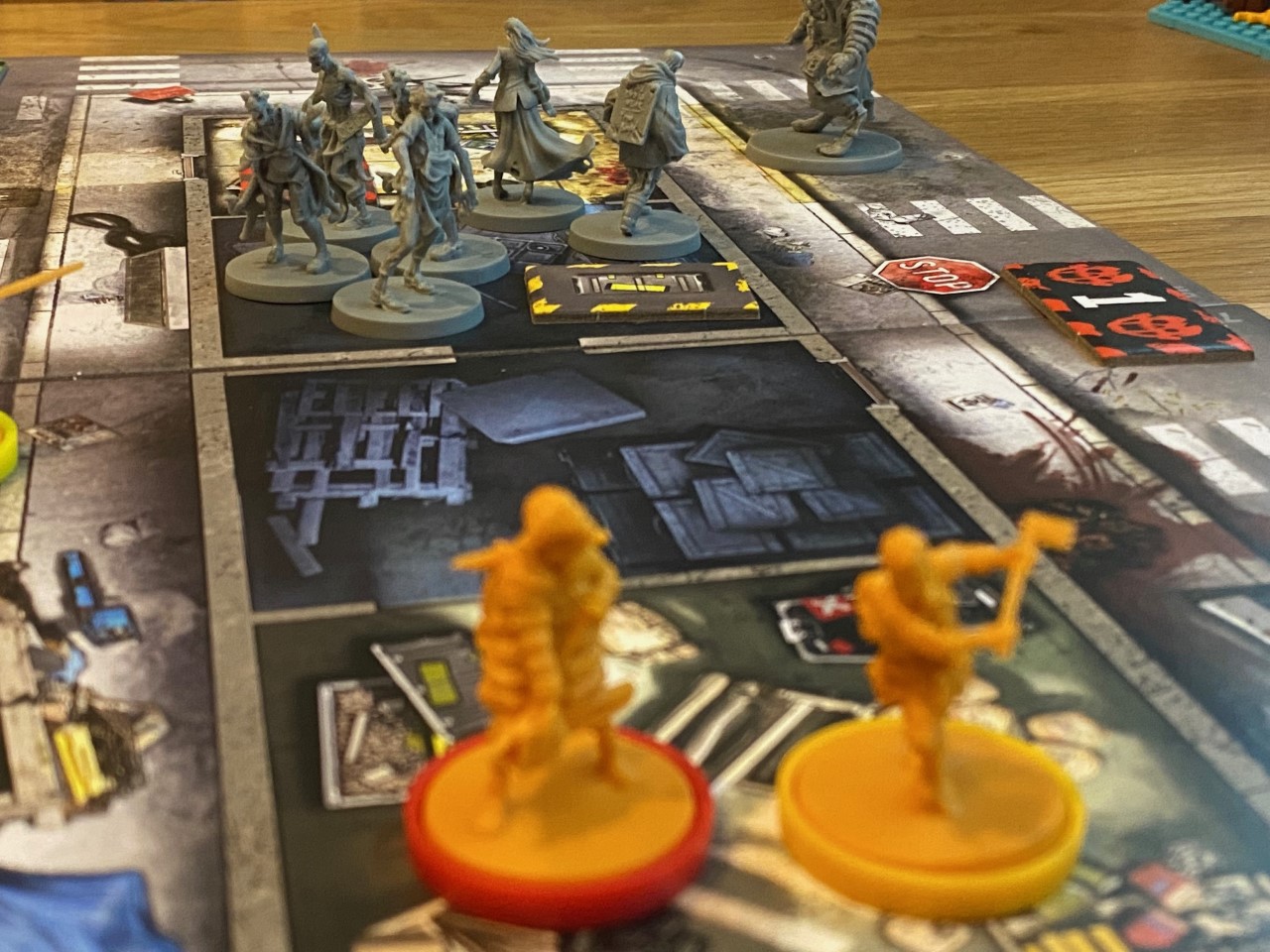 Actually, maybe that honour goes to Doom: The Board Game, but even though Fantasy Flight Games did a brilliant job of recreating the frantic, visceral combat of the video game, I think Zombicide: Second Edition is faster, smoother and more exciting. This is a game where complexity makes way for fun, and the balance is kind of baked into every part of the game, rather than layered on top in the form of a load of fiddly rules. Let me try and explain what I mean.

Zombicide: Second Edition features four abomination zombies, each with its own sculpt and a simple additional rule that makes it worse than other zombies. The main issue with abominations though, is that they take three damage to wound and not one single standard weapon in the game deals three damage. The only option when an abomination turns up is to have a molotov cocktail, a two damage weapon and a skill or item that adds “plus one” to it, or to run. 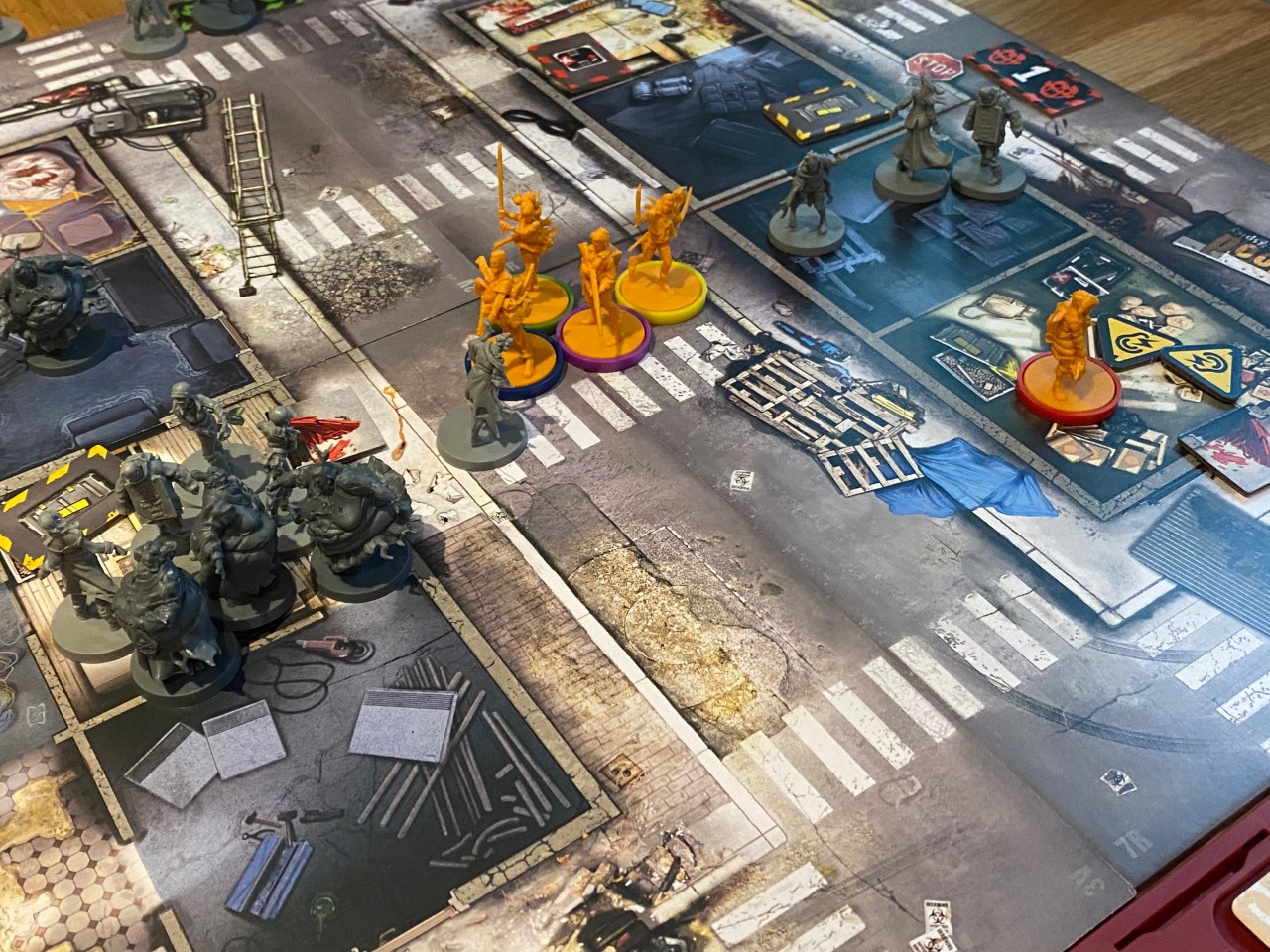 If the players decide to try and tackle it, they can move towards a pimp-weapon (cringe) crate and try and get a weapon that is guaranteed to be good (but still won’t do three damage) or they can search rooms for a molotov cocktail. Where other games (including those in the wider Zombicide series) might make searching a load of hassle — rooms only searchable once, several different decks of items etc – Zombicide: Second Edition simply lets players draw one card per search, and an individual player can only search once per turn (unless an ability says otherwise).

When you bring these two aspects together, Zombicide: Second Edition welcomes and positively encourages players flying into rooms, searching frantically to get what they need, shooting a zombie or two, then perhaps searching again the following turn if needed. If the abomination gets too close before you find what you need, you will need to retreat, and of course all survivors make noise, so in another of its simple systems, zombies will keep moving towards populated locations, especially where there is fighting. 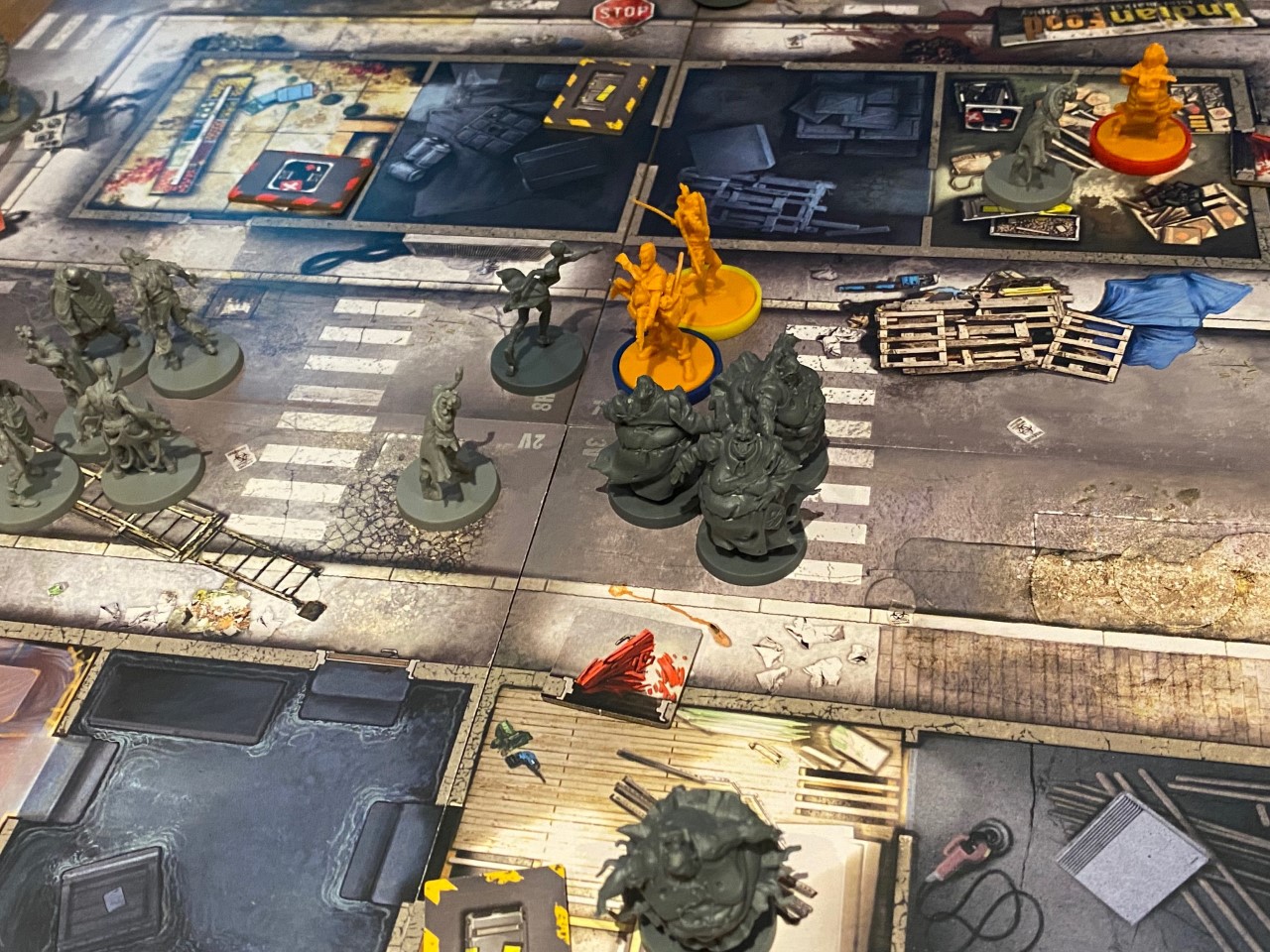 I just love how Zombicide: Second Edition drives you to push your luck in finding ways to deal with the increasing number of threats on the board, but also the way it punishes you. Survivors have three health by default, which is three hits. Kid survivors have two. If a zombie is in the same space as a survivor, and the zombie is activated either during the zombie step or through the spawn cards, it simply deals one damage. That means three zombies in the same space as one survivor, and assuming no weapon or item that allows the survivor to react, and it’s game over.

This, for me, is the perfect combination — what I described as baked in balance earlier — you can have the big guns, the grenades and medikits, but get yourself in a daft place with nowhere to run, and you will end up as food, almost guaranteed. This is made worse by the fact that escaping from spaces with zombies in is tough — you’ll just as likely get hurt trying to escape as you will by making a stand. That is, of course, unless you’re a kid. Kid survivors have the Slippery ability which simply allows them to escape a zombie-infested space without risk. I wouldn’t say that means you should let zombies get that close to you, but if they do, you have a better chance of escape. 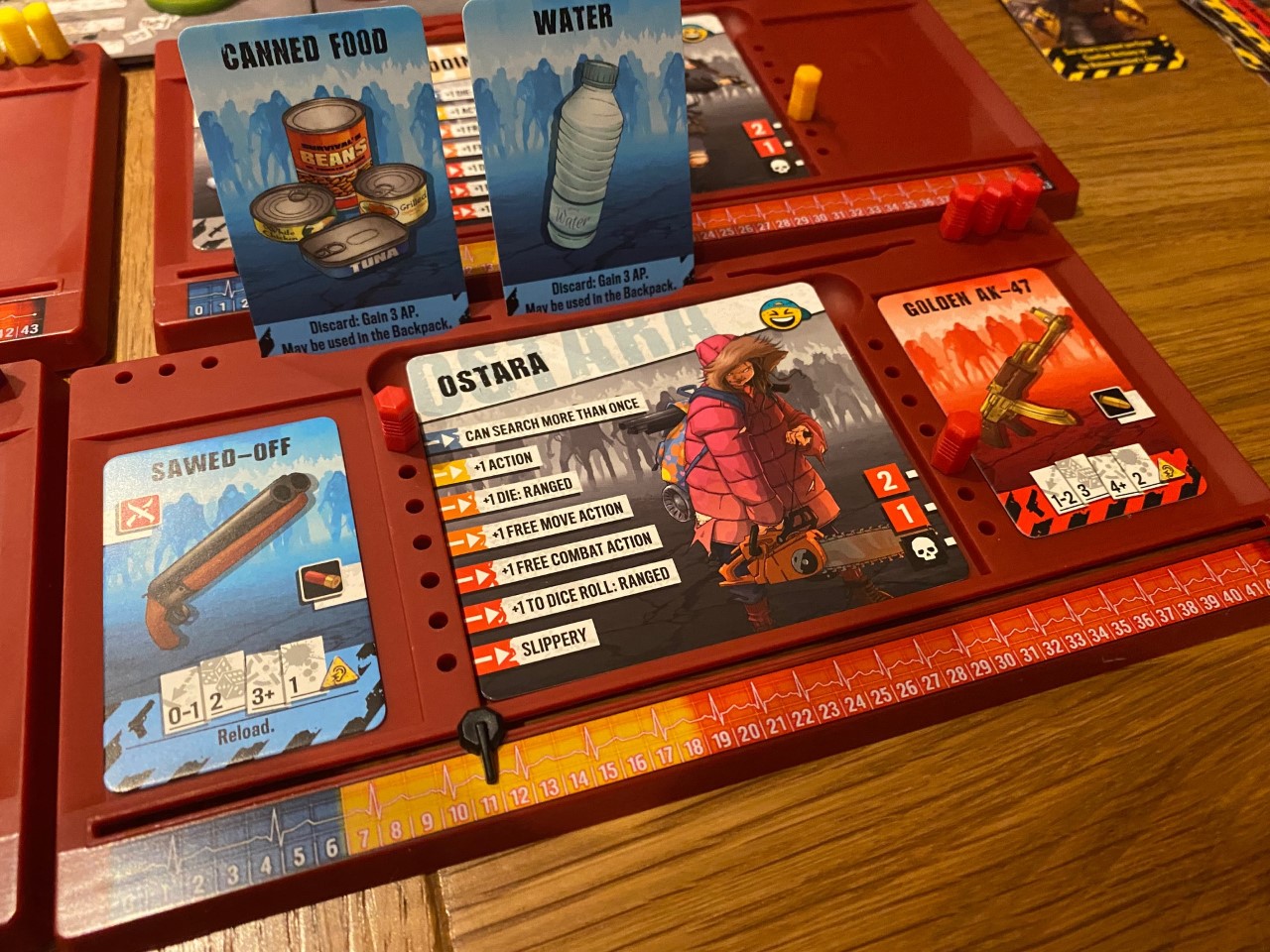 Killing zombies is also rewarding in Zombicide: Second Edition, and one of the key mechanics is without doubt the ability to gain additional skills as you kill enemies. Each regular zombie kill provides one experience point (tracked on your player board) and each time you increase your rank from one colour to the next, you gain a new ability. There’s always a but, of course, and in this case that but is that zombie spawn cards get more powerful in line with the highest ranking survivor – forcing all survivors to keep pace or risk the game running away without them.

I could go on, but with almost a hundred fantastic and varied miniatures, twenty-five missions (plus three or four downloadable ones already released for free) and such a solid, remastered ruleset, Zombicide: Second Edition is the definitive post-apocalyptic experience. This game is so fast, so slick, and now relatively fast to set up, whilst so very rewarding that I just love it and I want to see everything it has to offer. Zombicide: Second Edition, is, for me, the best in class — if we did do ratings here, this would be damn close to a ten out of ten.

You can find Zombiecide Second Edition at various places around the web, including over on Amazon.