Dr Reiner Knizia is without doubt one of the most prolific and talented board game designers that has ever lived. Perhaps one of the best things about the sheer number of games Knizia has produced is that his back catalogue is just as good as his newer titles. The Quest for El Dorado was released in 2017 by Ravensburger, and even though it isn’t that old, it seems to have been tough to get hold of.

The Quest for El Dorado takes one of the simplest concepts in any competitive space — that of a race — and pitches it as a race through the Amazon rainforest. Where racing board games of yesteryear relied on luck mechanics such as dice rolling, The Quest for El Dorado uses a deckbuilding mechanics that gives players full control over their destiny. 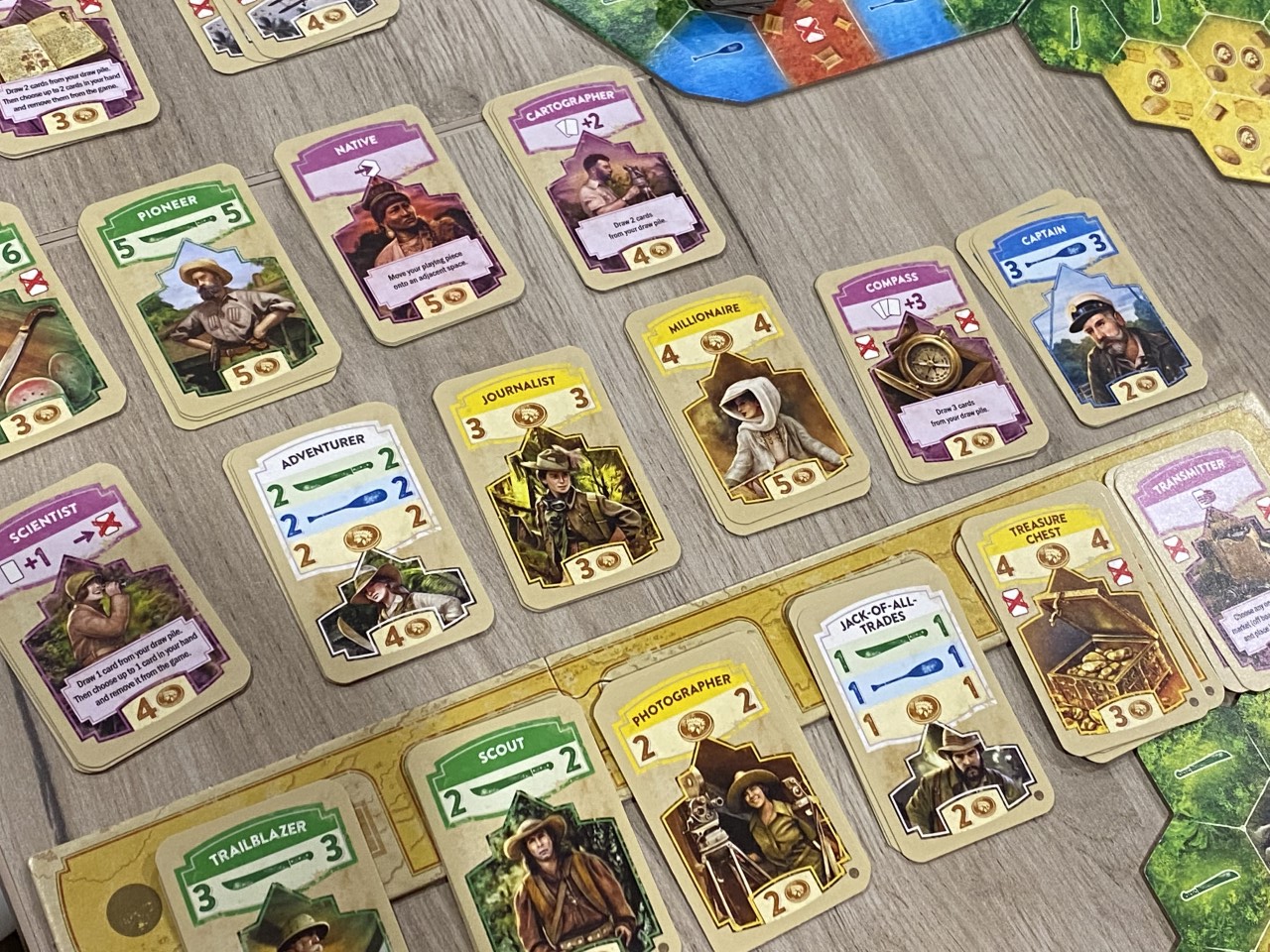 For those unfamiliar with the term, deckbuilding games generally begin with each player holding an identical deck of cards — in this case eight — which will be shuffled and a hand then drawn. In The Quest for El Dorado the deck consists of four cards that generate one coin each, three that generate a machete and one that provides an oar.

The relevance of these “currencies” is two-fold. First and foremost, each space on the board (which will be made up of between four and about six large hexagonal tiles containing smaller hexes) will show one or more of these symbols. For example, a jungle space with one machete on it will require a player to use a card with at least one machete on it — simple. A water space with one paddle? You guessed it, you’ll need to play a card with one or more paddles on.

The second purpose for each card, especially those with coins on, is to buy new cards. At the outset of the game a pre-set market containing six piles of three, identical cards will be set up. Instead of using cards to move, a player can discard coin cards to generate the number of coins shown, and throw non-coin cards at a rate of two cards for one coin, to generate an overall purse and then buy a single card. 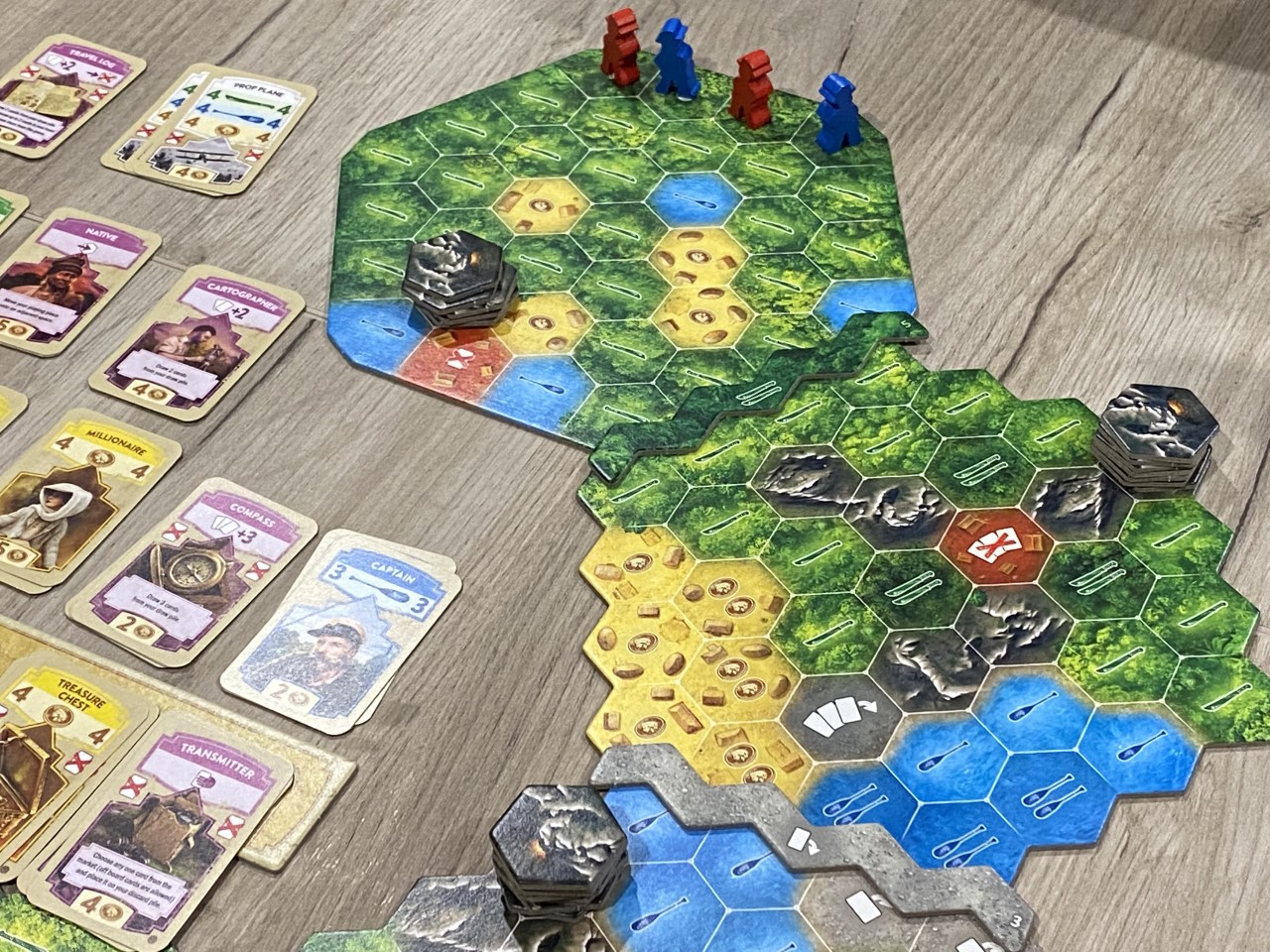 As an example, on a turn, a player might choose to use two machete cards to move two spaces through jungle, and then they may wish to use their next two cards (both showing coins and generating two for their purse) to buy any card from the market worth up to two coins. Alternatively, that player has forfeited their move to discard their two machete cards (for one coin) adding that coin to their two coin cards, giving them a purse of three coins to spend.

In this way, the players make progress through the jungles, rivers and villages of the Amazon rainforest, whilst simultaneously adding new cards (which represent members of the expedition, or items) to their deck. Some cards simply add more coins, paddles or machetes, whilst others provide a choice of each. The most interesting cards play with the rules — allowing more cards to be drawn, or for cards to be permanently discarded (a good way to remove weaker cards from your deck later in the game).

At three or four players, each player has a single adventurer miniatures on the board to represent their party, and blocking other players based on the layout of the map is a critical part of play. Mountain regions, for example, are impassible in the base game (although an already released expansion adds an item to overcome this) so blocking players in tight paths is a key strategy. At two players, each player has two expeditions on the board, which changes the dynamics of play more than you might think. 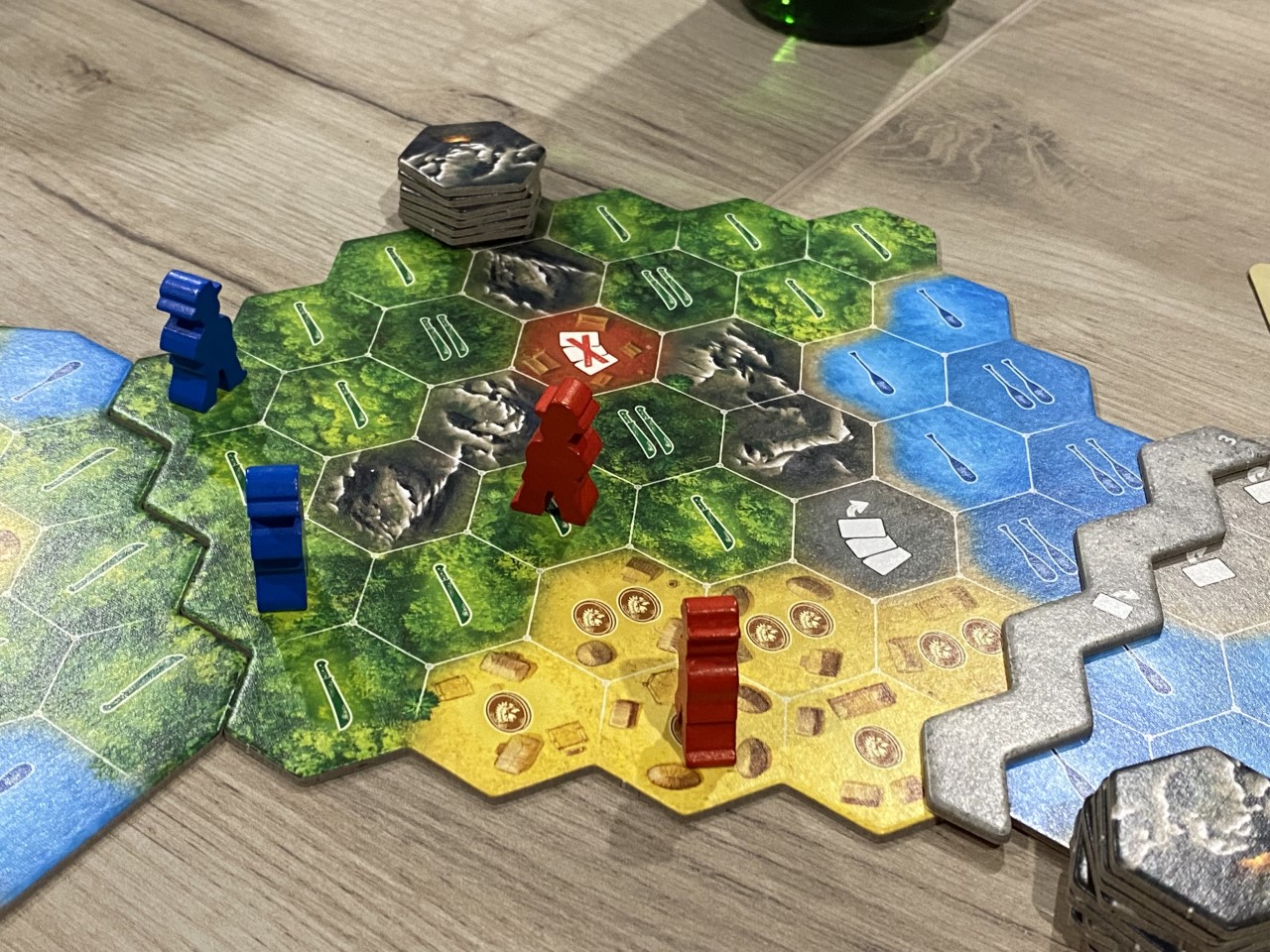 For me, The Quest for El Dorado is classic Reiner Knizia at his very best. This is a fast-paced game that is incredibly easy to teach and to learn, yet the modular map leads to infinite replayability, and the fiendish and occasionally spite-filled race is absolutely reminiscent of the turn of the 20th Century theme that inspires it. Like all the best Knizia games, the complexity is in the decisions, not in the rules or mechanics.

The only slight downside comes with the fact that The Quest for El Dorado can actually feel a little too straightforward at times, although I have to say that it’s variable nature means that it’s not a game you can “work out” and then just dominate after repeated plays. This simplicity is combatted slightly in the base game by the inclusion of an optional Caves expansion (which I would recommend you always use) which just adds some small, subtle tweaks that reward players for deviating from whatever the strictly “best” route is. 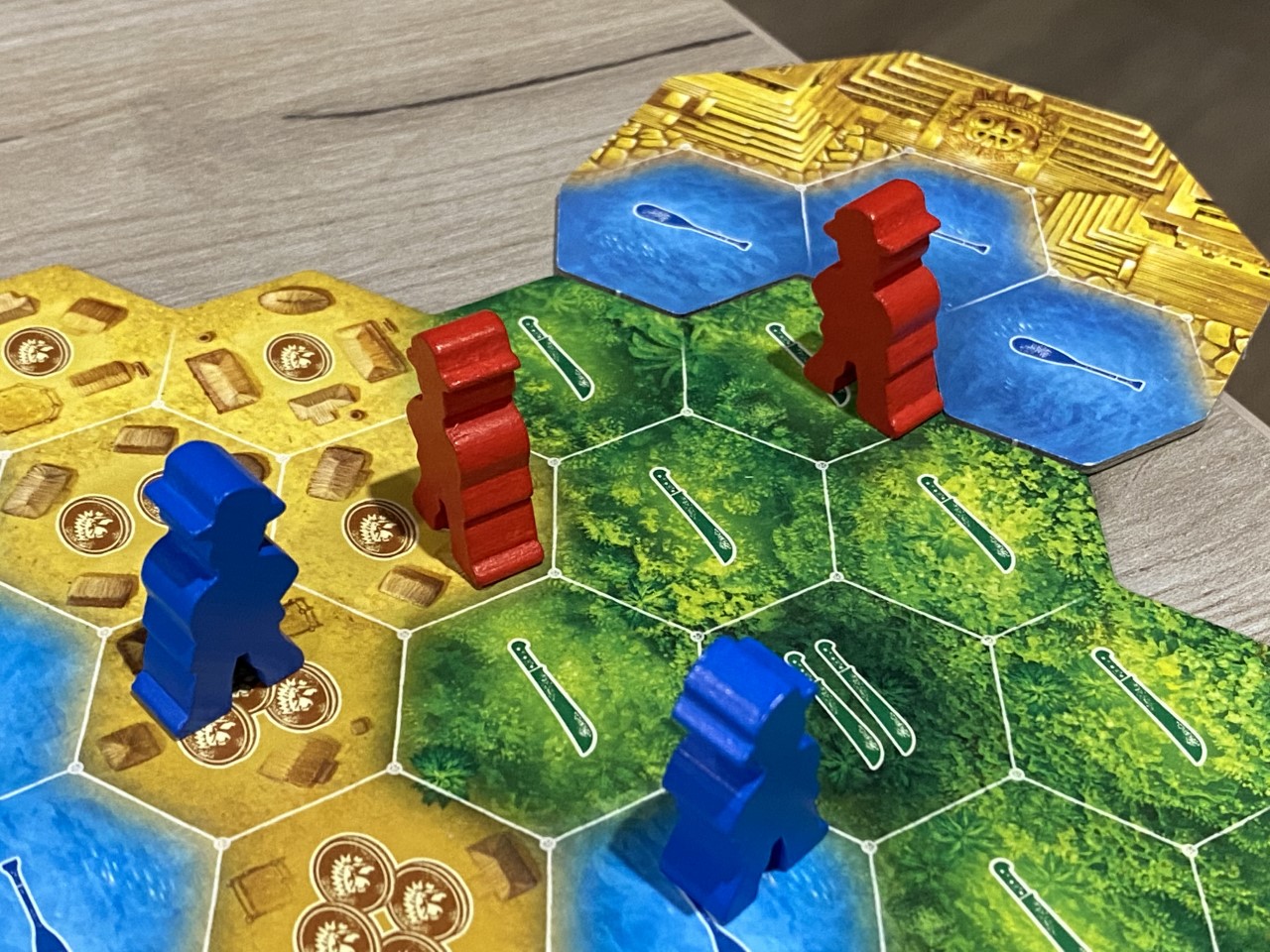 I also wonder if this is the reason for the Heroes and Hexes expansion, which was deployed just a year after the release of the base game. I can’t comment on what it actually adds because I haven’t played it, but I can state that The Quest for El Dorado is a game that works really, really well out of the box, but which has genuine scope for improvement through expansions that I have spent real hours of my life dreaming up — no doubt Knizia will have done a much better job.

The Quest for El Dorado is a game that joins the ranks of deckbuilding royalty such as Dominion or Lost Ruins of Arnak — and in fact, it’s so good that it may even have inspired that second game (even if Arnak is a much more complex game with many other mechanics involved.) The Quest for El Dorado is so good that I think it will become one of my go-to gateway games for some time, and I’ll even be happy to play it with more serious gamers, especially if we want things to stay relatively chilled.

You can grab a copy of The Quest for El Dorado on Amazon or find a stockist at Ravensburger.

One Up Gaming and Big Boss Battle team up for a huge giveaway.