Tales from the Loop The Boardgame is a cooperative, story-based dive into a light science-fiction setting that overlays a tiny pocket of land in 1980s Sweden.

It’s a sweeping adventure where each player takes on the role of a stereotypical teenager of the time — the Jock, The Misfit, The Nerd, etc — and have to carefully balance their investigations with attending school, completing chores and getting home in time so that they don’t get in too much trouble with their parents. Rampaging robots, an electric bully or even dinosaurs are inserted onto the island depending on the scenario that is chosen, and the characters need to use their skills, as well as collected items or anomalies, and a few lucky dice rolls in order to progress through the scenario’s diary cards and to an ending. 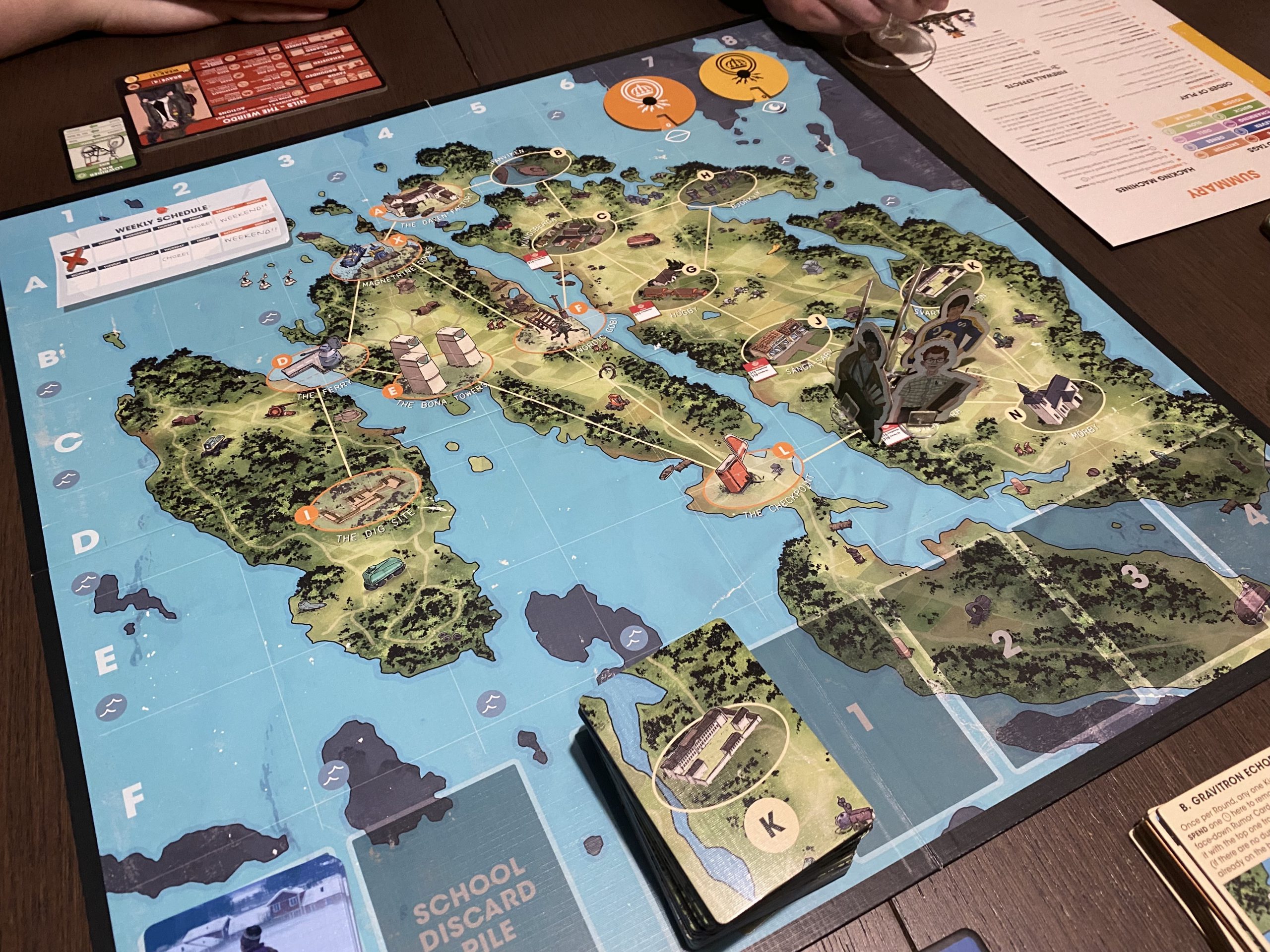 Each scenario is made up of a pack of diary cards which are each double-sided. Successfully completing any of the revealed diary cards — which can be through things like gathering Insight, passing tests, or collecting enough tracker tokens on a location — allows you to work your way through each of the scenarios to a conclusion. However, the world (and school week) is still ticking along as you work on solving these mysteries. As such you need to split your efforts between going off and solving the big mystery of the scenario, dealing with rumours, and doing your chores — all in the space of time between leaving school and getting home for dinner.

Here’s the part in the review where we normally say something like, ‘The set-up is simple’. However, for our group, who normally deal with shorter (time/length) and less complex games it certainly took a while to get set up and going — that said, successive starts would certainly be easier as you know exactly which of the 200~ pieces of the game you’d need to take out of the box and when. You’ll want to lay out the folded map board first, this shows off the web of locations that you can move between and also the surrounding area (which is divided into grids) that is used when it comes to robot movements. You’ll want to pick a scenario card and then use the instructions on that to filter through the diary deck, the school deck ad the rumour decks to strip out any cards that aren’t appropriate to your scenario. After that players will pick a character — each of whom gets a special item, and has slightly different stats — and build their standee. Next up you shuffle the earlier mentioned school and rumor decks, as well as the chore, item and anomaly decks and then start placing them around the board. Each player picks one of two chore cards, and the board is adjusted appropriately — adding certain tiles if appropriate — for instance by adding the Video Rental Store to the board if the appropriate chore is in play. 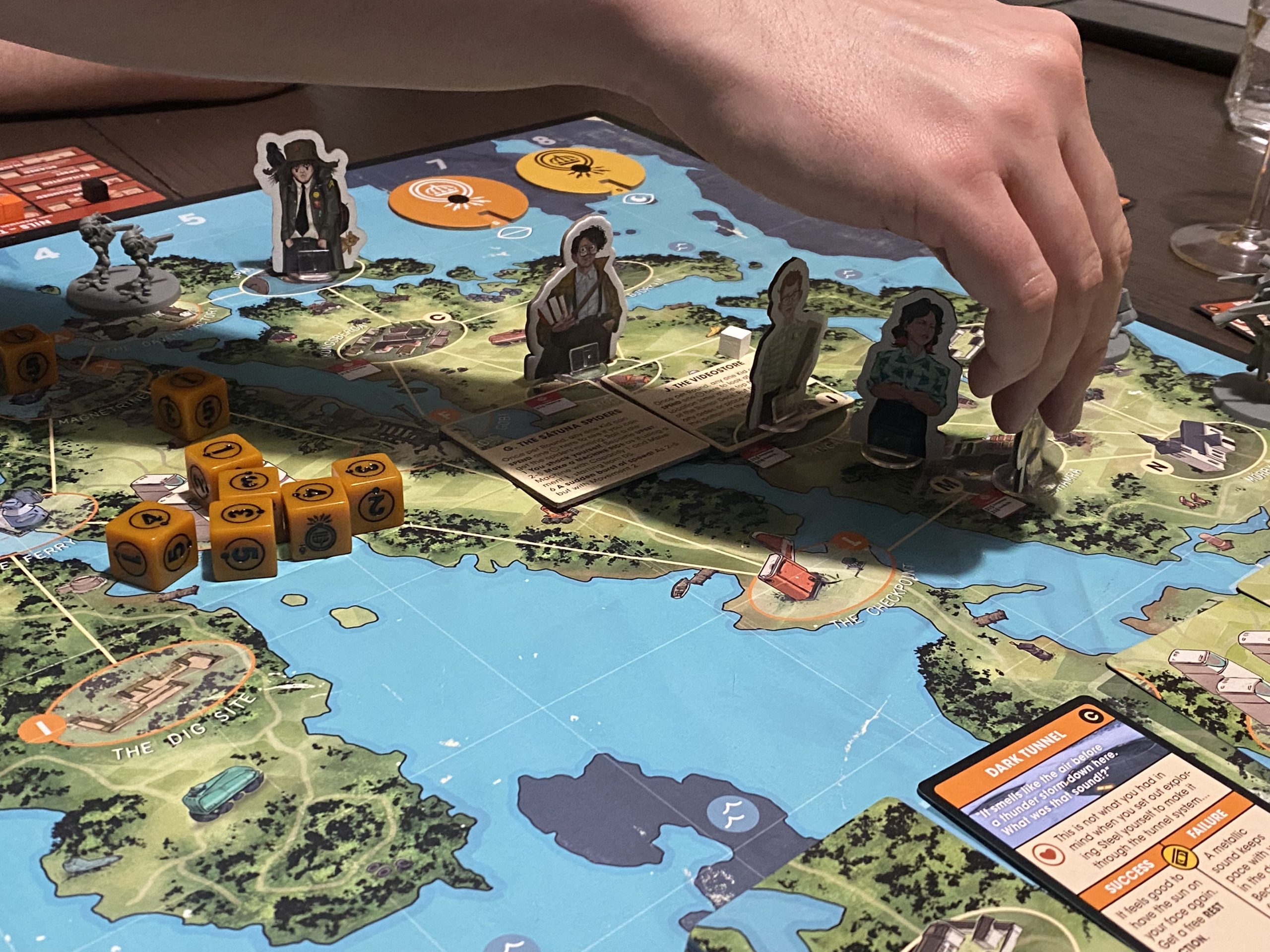 Now, after that, you’re actually pretty close to getting started. There are a few tokens to litter around the play area, orange time tokens are given out to players (six each) while Hack, Rumor, Marker, Firewall, and Counter cubes all go within reach. Each player gets a Favor Cube to track the standing they are in with their parents and then the robots indicated on the Scenario card are put into play. Each Robot has a character card which has room for Firewall tokens, and has a card on it indicating its status… it then has a standee which goes on the corresponding spot on the play area. Notably, Robots follow the grid references, while the kids follow the circles and connected lines.

In addition to the above there are two Summary cards which are worth passing around, two dials to set up (the positive Insight and the foreboding Enigma) and a card to tell which player is up first. There’s also just under 100 scenario tokens, which you might not even need for some of your scenarios; the card will tell you if you do. You then read through the first Diary card, which will give you some objectives, slide out some rumour cards (each of which corresponds to a location the kids can reach on the board) and then play begins. 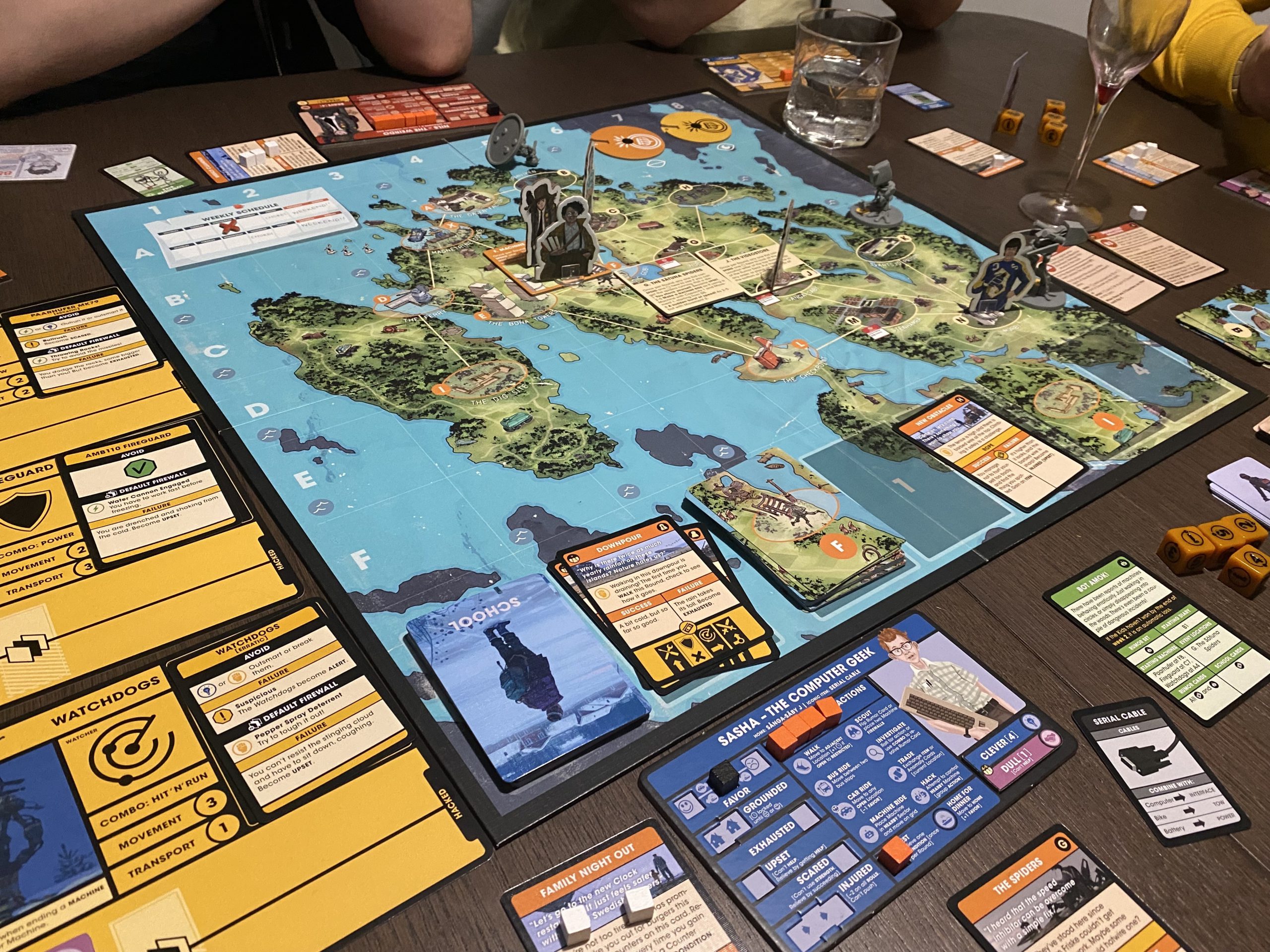 Each full round counts as a day in the life of the players. It starts with the first player drawing a school card which they can (if it says May) or must complete. Each card like this has a success or failure state, there is no middle-ground. Sometimes you can use combos of items to complete tasks without needing to roll, but most of the time you’ll need to roll dice.

Rolling dice in Tales from the Loop The Boardgame is different depending on the number of players that are playing, with a greater level of teamwork required to function at larger (4-5) player counts — this basically means that if you are using your character’s strength you’ll roll less dice without the help of others. If it’s your strength you’ll roll 5, if it’s your weakness you’ll roll 2, and if it’s one of the other three traits then you’ll roll three dice… however, in the case of larger teams you’ll roll 4 and 1 respectively instead. Other players can chip in, adding one dice to your pot, and you can use an item of the right colour to get a boost too. This means you could be rolling anything from 1-8 dice, depending on your luck and who is in the area. 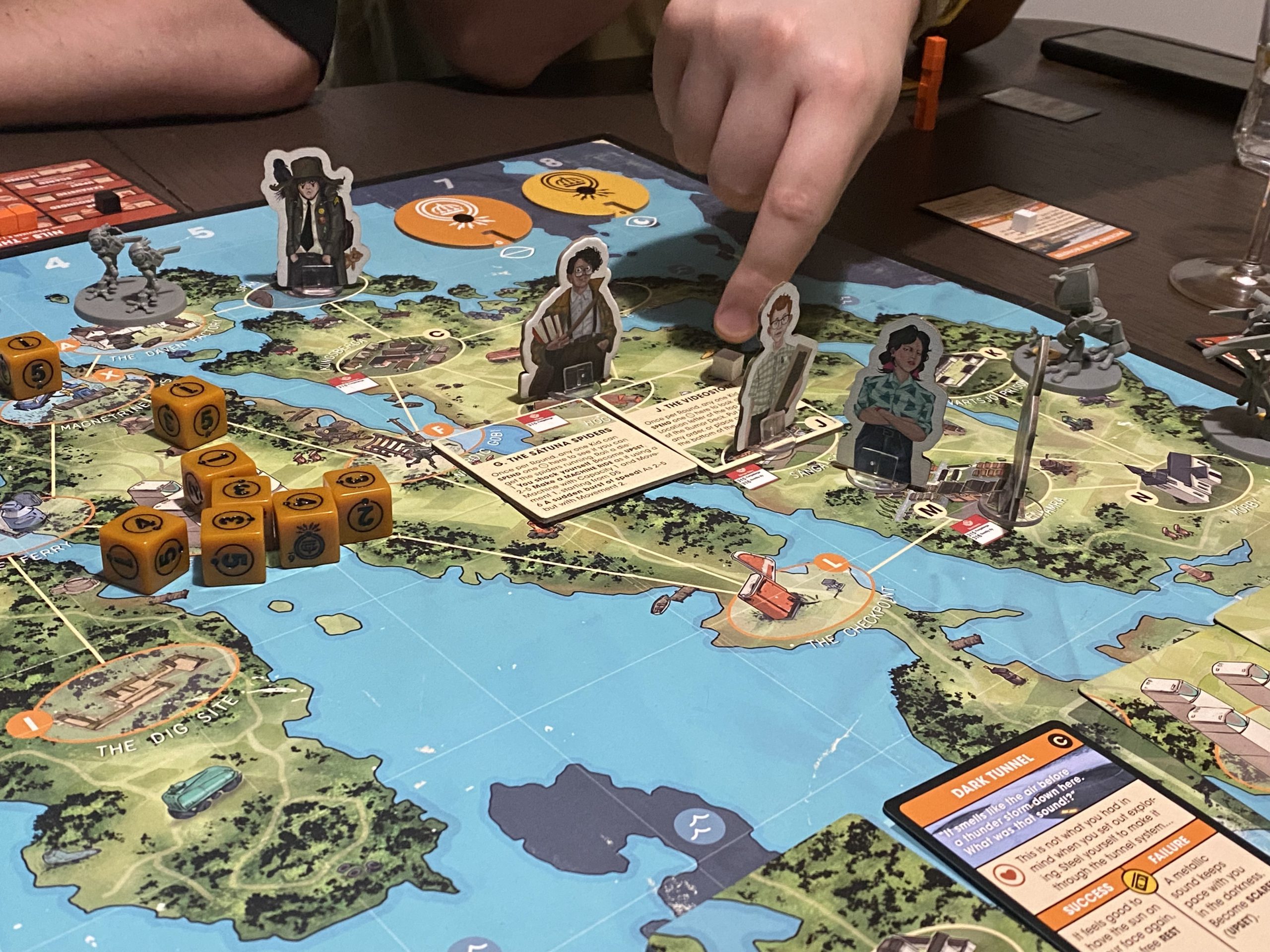 This dice rolling in Tales from the Loop, gaining and contributing system is core to everything, you’ll use something similar for hacking and for solving rumours too. If you don’t succeed at a roll you can push, but by doing so you gain negative status effects for a while… these can really hamper your plans by reducing the number of Time Tokens you have, taking away your ability to help, taking away your strength or damaging your rolls. Luckily you can fix these statuses, but that takes time, which can be very limited during more intense diary phases.

After the School task is complete the first player is free to move around the island as they wish, movement between bus stops is cheaper, but moving between the open (white circled) areas into restricted areas costs extra. Players will want to scout and investigate robots and rumours, ultimately looking to hack (to control or move) or solve the rumours in order to keep the island itself passive, gain insight (which is often a valuable resource and moves the players towards a good resolution) and stop the rumours from flooding over between turns (which causes Enigma — insight’s sinister twin to rack up).

After the first player is done, play simply moves onto the next kid and continues until everybody has gone. Then the next day starts up with the 1st player shifting around the board (so everybody gets a chance to have at least one School Situation during the game). 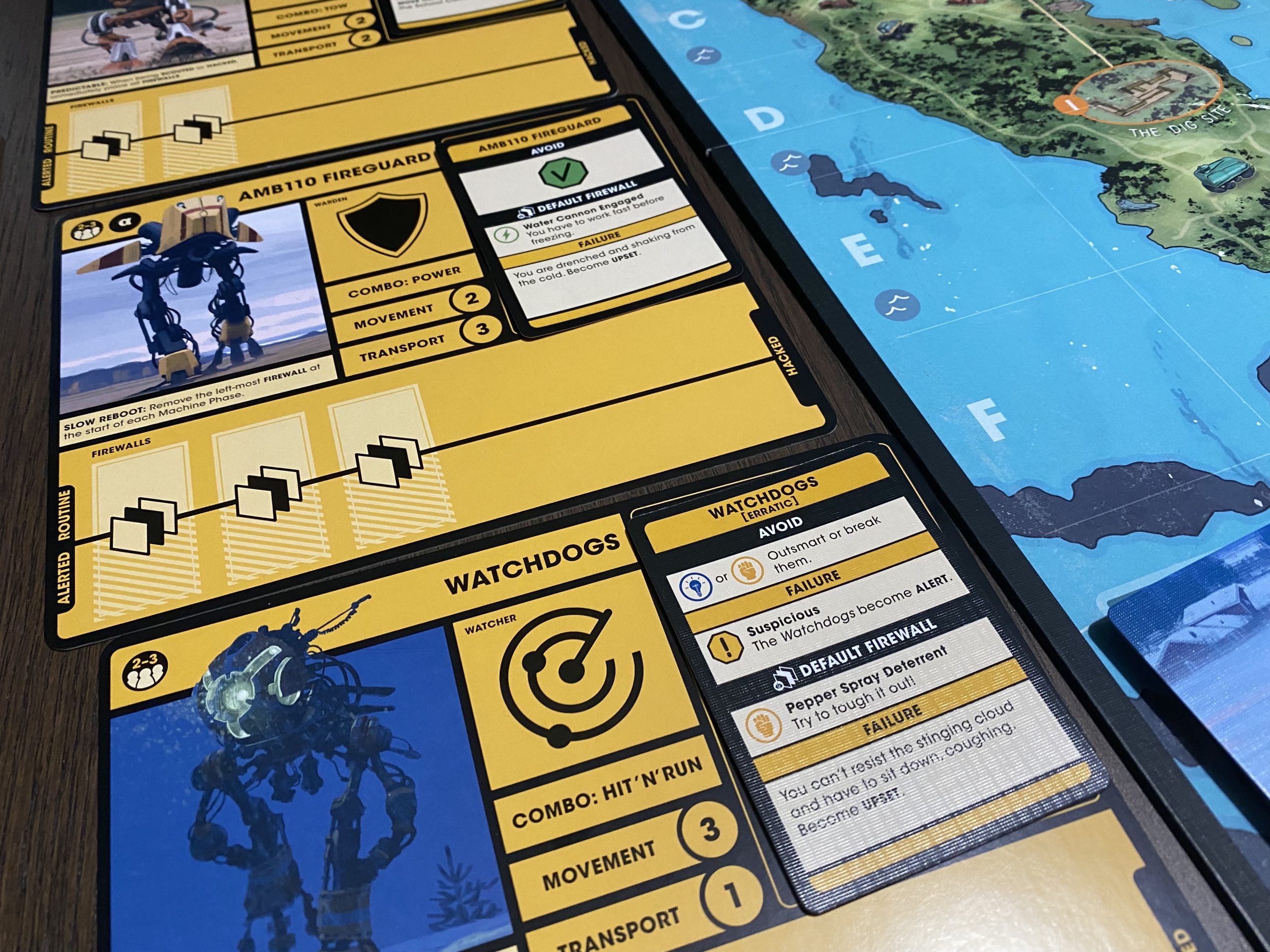 While the majority of the diary entries and rumours can be solved without interacting with the robots, the robots are handy tools to control. The big issue is that if they are alerted, or in a different mode, then they can have quite serious effects on players who don’t successfully avoid them… and, you guessed it, avoiding is based on rolls as well. Once players are familiar with this though, they can identify the firewalls of a robot and start trying to hack it (with other players), and if they succeed then they gain a robot that can move them around the map faster, and also automatically, infinitely, solve combo challenges (until the hack expires).

There are more things to consider, of course. If the kids don’t get home in time then their parent’s favour drops, if it drops really low then they can be grounded. On the flipside, if you get back early then you can earn favour… but it means that you simply don’t get to do as much that day. Favour is incredibly useful as a parent can drive you around parts of the island in exchange for it, which can really change the way that rumours are cleared.

Rumours need to be uncovered before they can be solved, so a restricted area rumour can take two time tokens to get into the restricted area (from the school, where each school round starts), another 1-2 to move toward it, a further to reveal and then one more to solve… The issue is, you’ve then spent your six time tokens to (maybe) solve it, which means you miss dinner and move closer to being grounded; Ooph. 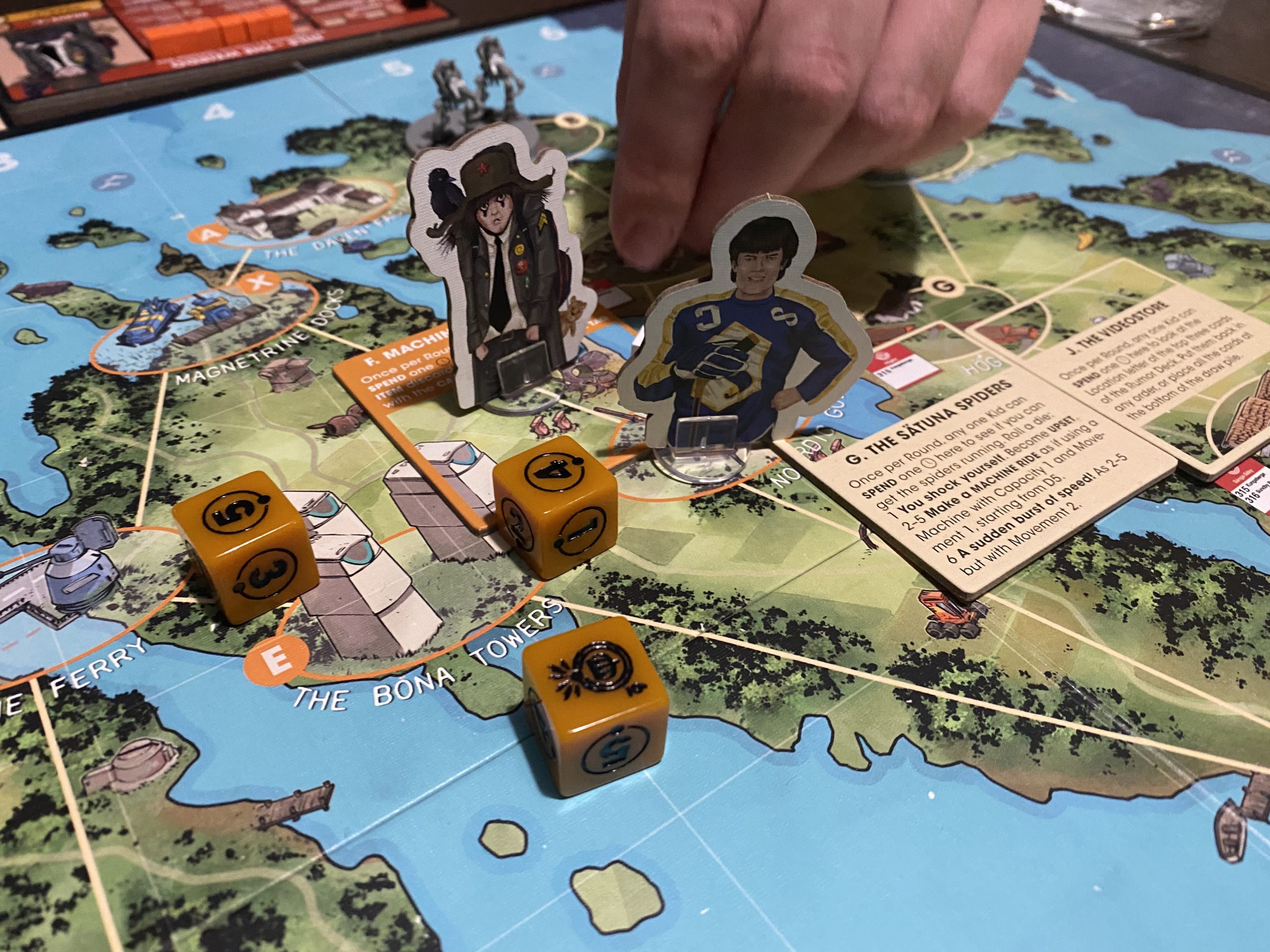 Rumours are powerful though, they can give items or anomaly, and they also reward insight. Not clearing them isn’t really an option either though, as new ones appear and (unless the letter/space duplicate) can push old ones off the board, instantly demanding strategy shifts and wracking up Enigma points.

That, really, is the core cycle of Tales from the Loop The Boardgame. You’ll want to complete your chore in order to get a reward, and also not be punished. Not only that, you need to be constantly chatting tactics with the other players to make sure that the right people are going to the right places, and you’ll also not want to separate too much because helping each other with rolls is important.

I had a fantastic time with Tales from the Loop. I really enjoy anything that layers a world (in this case of technology and mystery) over the world, and the idea of these kids going off and solving mysteries on their prolonged walk home from school is a fun and magical twist on the adventurers of other board games and RPGs. That said, the first set up is very time consuming and daunting; symbols and terminology are not as clear as they could be, but, goodness me, just look at the artwork and setting of its world. Wow.

Tales from the Loop definitely a game that would have benefited from some of those, sometimes divisive, ‘Example Rounds’ in the rulebook, but most people used to medium-sized board games wouldn’t be too overwhelmed after a read-or-two of the rules.

Tales from the Loop The Boardgame is available now on Amazon.

Close encounters with death in the Forbidden Lands