The Quest for El Dorado: Heroes and Hexes Expansion adds more than just a little seasoning

I have often discussed the two main different kinds of expansions that exist in the board game world — those which add to the existing mechanics of a game, and those which transform them. The first and only expansion (aside from a few promos) for Reiner Knizia’s The Quest for El Dorado is known as Heroes and Hexes — and it is very much the kind of expansion that just builds on top of what is already there.

In Heroes and Hexes, there are three new map boards, a host of new cave tokens, a deck of cards (which I’ll explain shortly) and a handful of curse tokens. The new boards include various cursed spaces (which correspond to the curse tokens) and are placed in the normal way, either as the result of the four or five pre-configured routes, or in any custom setup the players wish to imagine — and this is the fundamental addition that Heroes and Hexes brings. 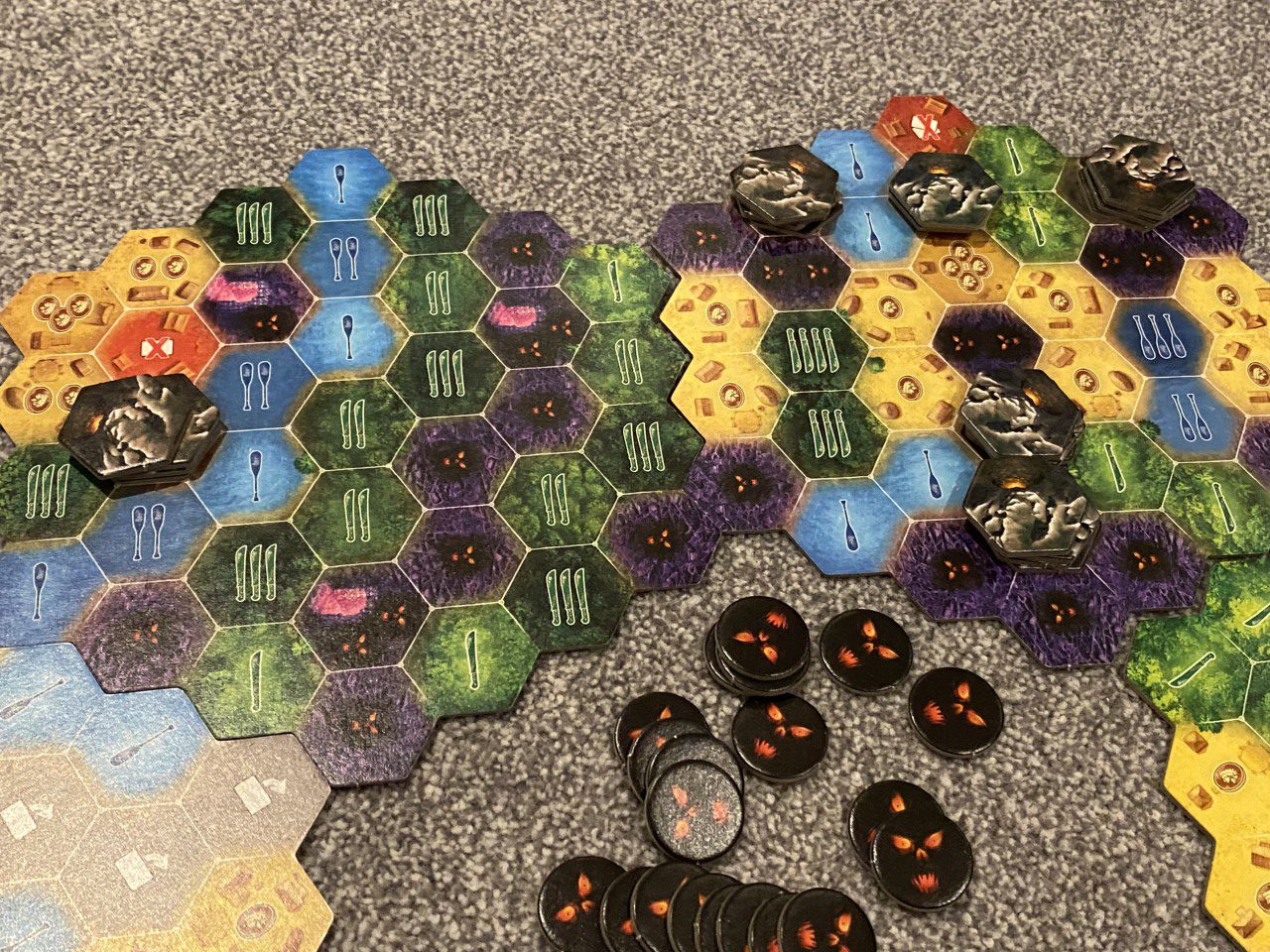 A small “hero tavern” tile is also added, and next to it a subset of the new deck of cards is placed. This deck of ten or so heroes includes various extremely powerful characters that can be added to a player’s hand in the normal way. Each player may take only one hero per game, and there is no cost for doing so besides taking a detour to reach them in the first place. Players are also provided with a new starting card which represents one of four animals, and whilst not overly powerful, these cards add a little variety and some personality.

In the market, there are four new types of cards that can be added to your deck once the first stack of basic cards has been claimed. These are the Shaman, the Geologist and the Cave Explorer, as well as one unnamed but very powerful character who adds three paddles, machetes and coins to your expedition turn. The new, named characters are all powerful and offer ways to interact with the new curses (and cave tokens, which are optional in the base game but mandatory in Heroes and Hexes). 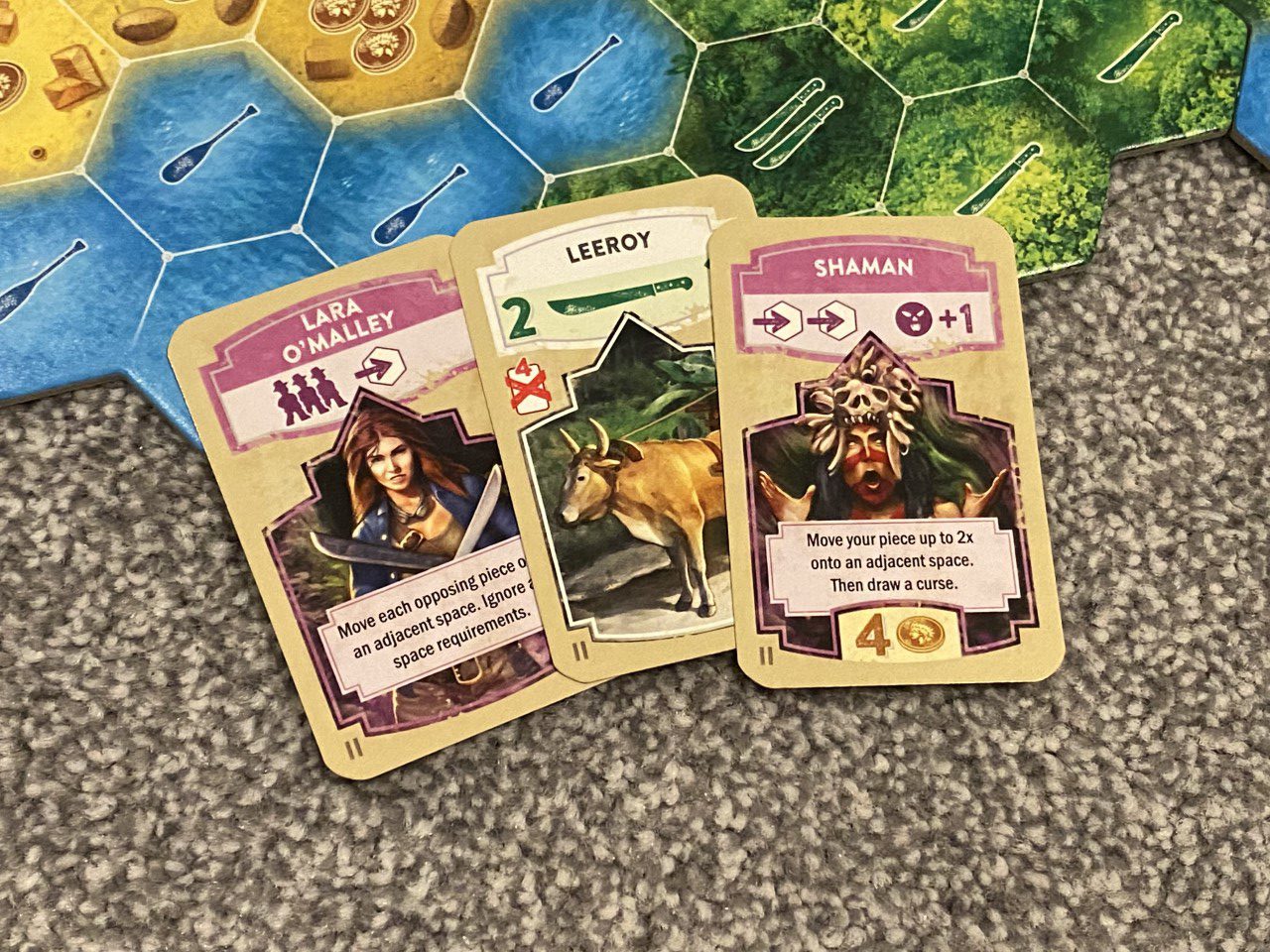 All this aside the main gameplay difference here is most certainly the introduction of curses. Cursed spaces (known as demon spaces) often provide very appealing shortcuts around mountains or expensive village terrain spaces and in some cases, cursed barriers simply must be passed through. When a player enters a demon space for any reason, they will always take a curse token — with one of several potential effects.

Some curse tokens force the player to put curse cards into their deck — effectively clogging up future turns. Others force the player to lose cards, or do something else to shake the curse. The new cave tokens do include ways to avoid curses — including one token which allows you to negate the next curse you take, for example. The thing I like about the curses here is the way in which you’re always evaluating the risk of “rushing” through demon spaces because the route is more direct, but will the risk of taking bad curse tokens outweigh the gain? 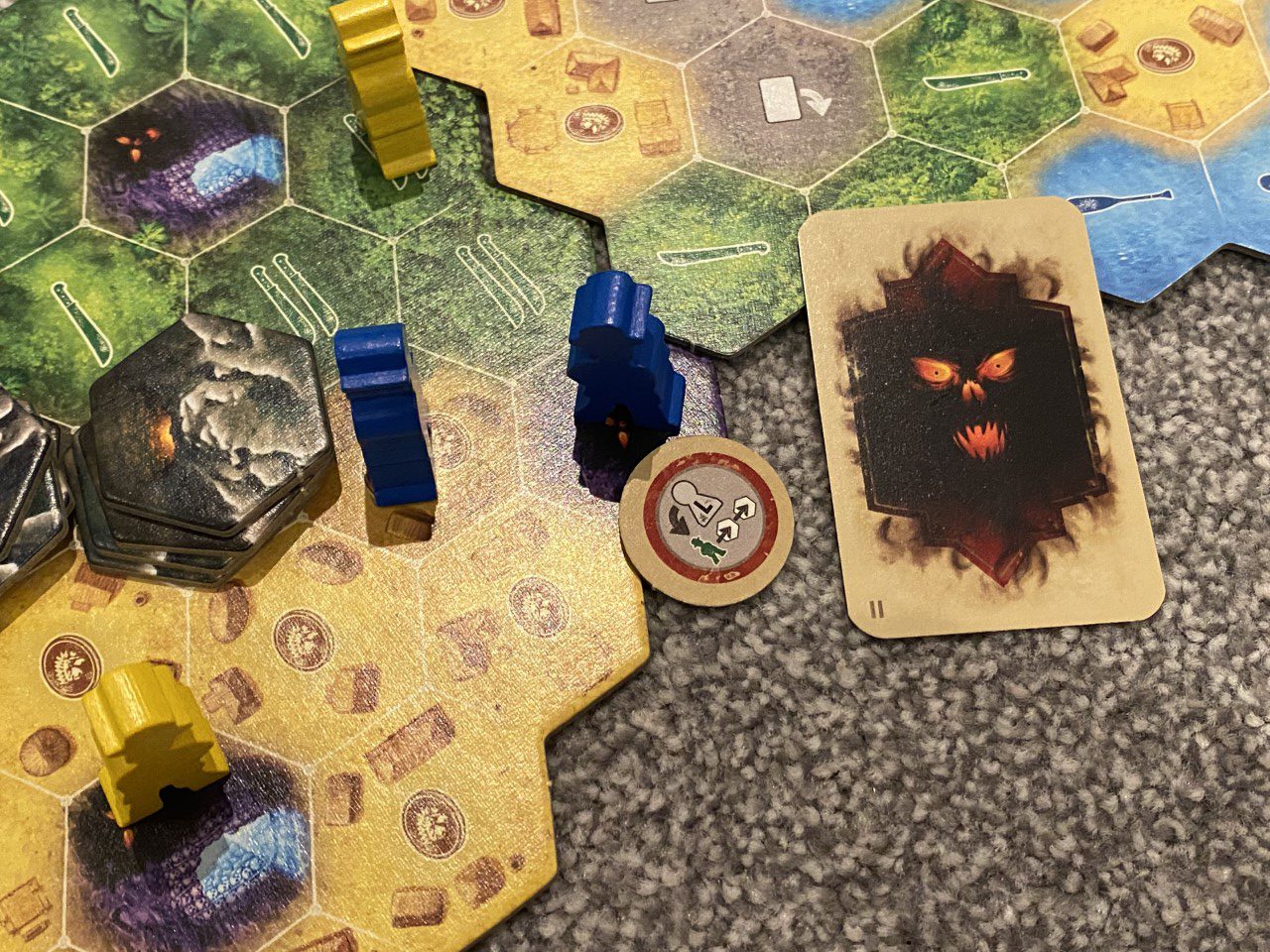 There is one thing that I don’t like about Heroes and Hexes, and that is the introduction of ways to climb over mountain ranges. When this ability is accessed via a lucky cave token, or a timely card draw, it can massively unbalance the game. Mountains in The Quest for El Dorado are very important for channeling players, and having one player who can circumvent that rule is frustrating and feels overpowered. The introduction of tunnels within one tile (on some curse spaces) however, makes perfect sense because it involves taking a curse, and it is open to all

In summary, Heroes and Hexes is a good, but not groundbreaking addition to The Quest for El Dorado. It subtly builds on and enhances several areas of the game, but it doesn’t rewrite the rules completely, or add too much in the way of new features. This is a good thing in terms of learning, and it’s quite possible to dive straight into the game with all expansion content without batting an eyelid, but equally, Heroes and Hexes probably isn’t the “big box” expansion that it seems to be positioned as.

You can find Heroes and Hexes on Amazon.

One Up Gaming and Big Boss Battle team up for a huge giveaway.