I don’t know about you, but when I first heard about Tentacular, a game where you’re a giant betentacled beast, I knew that I had to play it. VR seems to be a perfect for anything with even a slight chaos factor — we play games to do things we don’t do during the day — and so swapping out hands for tentacles and the power that comes with them seems like a surefire recipe for fun.

That said, this works for and against Tentacular because it means that it risks being signed off as a simple physics showcase. That would be a mistake because, while physics and item manipulation are definitely central to the game, it’s also a celebration of story writing, clever design and VR puzzling. As such it’s much more than just a sandbox experience, and in fact, by progressing through the lengthy campaign you’ll deepen and enhance the actual free-form elements with the new mechanics and items that unlock through it.

That isn’t to say that you can’t play Tentacular as a sandbox experience, it’s just quite shallow until you start following the story. You can, of course, grab and hurl around shipping containers, citizens and cars; Wreaking havoc around the isle of La Kalma. That’s certainly fun. However, once you do start getting through the campaign and unlock slingshots, magnets, anti-magnet charges and more you really open up the chaos and fun factor. Later in the sandbox is probably the best place to drop in that family member or friend who is a little bit sceptical of VR; it’s the fully unlocked sandbox that, like Job Simulator or Beat Saber, feels like a true advert for how fun VR can be.

But, there’s much more to Tentacular than its sandbox. The campaign is great, the writing is great, and the audio is great; It’s a phenomenal, fun and funny production. You take on the role of, as you’ve probably gathered, a large tentacled beast. The thing is, you’re actually just sixteen years old and you were raised by humans, so it’s not about being a wild rampaging kaiju, instead, you’re making the journey from a child into a contributing citizen of La Kalma. The campaign quickly starts to hint toward a wacky undercurrent through the town, though things seem normal from the outside there’s actually a mass of scientist-types around the city, including an industrious Mr M(oll)usk who is obsessed with the Space Race. Within a few short levels you end up working for these scientists, building constructions, tinkering with missiles, magnets and more, and it only becomes progressively more wacky as you get further into the campaign. 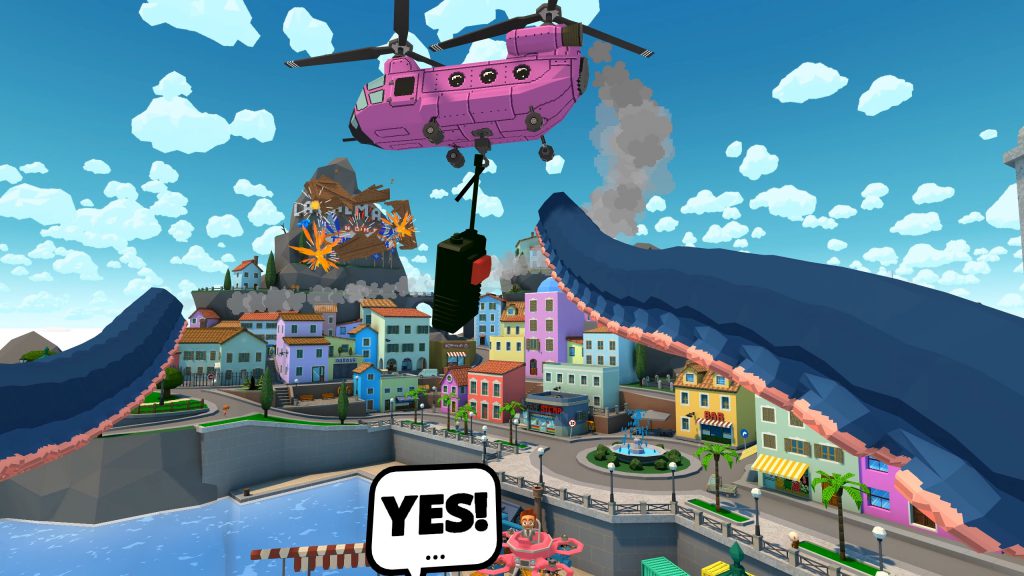 However, it’s not always easy. A lot of the puzzles are about accuracy and adjacency, which — when you’re a hulking beast — isn’t always so easy.  You’ll need to be specific with how and where you grab items with your suckers. If you grab with the end of your tentacle then you’ll have more control, but with the wider part, you’ll have a lot more strength. You’ll need to rotate items in order to orientate and position things carefully, especially when you need to attach things to magnets to create more complex constructions. Many levels require you to have specific objects in specific places, and these are often in the air, and at some points those constructions have to resist impacts from other objects, so careful placement is key.

Sometimes it’s fun to accidentally clip an item and knock it down, while at other times it really underlines the delicate perfection required in many puzzle games… it might be a physics game, but it’s definitely a puzzle game too — even if those puzzles are laid out in small, single-screen diorama instances. Outside of the puzzle elements, it is quite fun to whirl around and clip objects, but at some points in the campaign the pressure sometimes feels a bit much, which can dull that fun factor. I regularly ran out of limited items because I couldn’t construct a slingshot or had bad aiming while throwing things, at times I also found myself a bit frustrated with the mission givers because while you can tap on them to speed up their instructions if you hit them too hard then they restart their conversation. 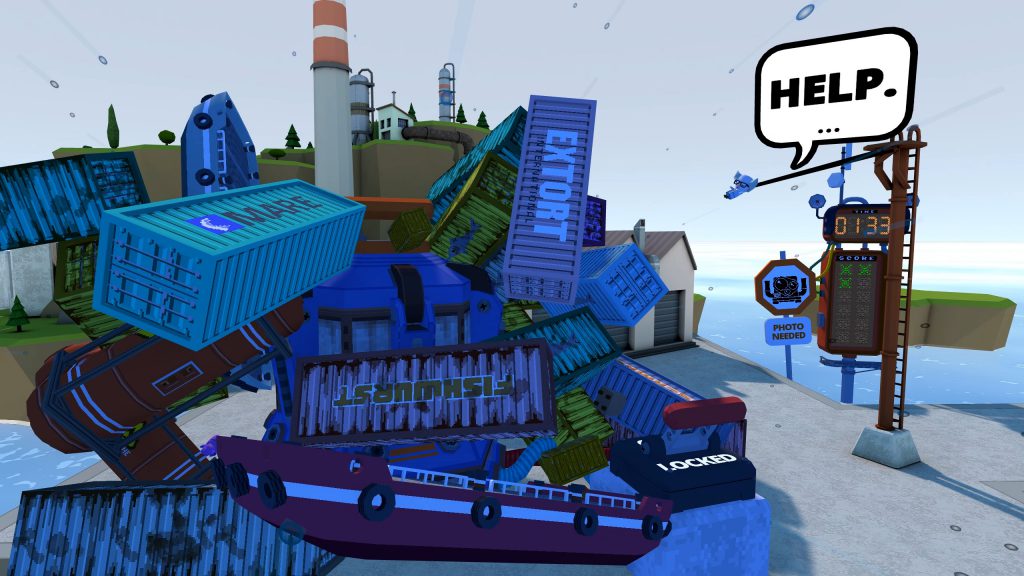 So, while gameplay feels great and it looks great too, it can just get a bit frustrating when you’ve found yourself stuck in a rut. Perhaps doubling down on this is the fact that the hint system (Signor Resetto, a little man who lives in a house and can reset the level if you’re stuck) has you wait about a minute before he presents you with a solution. The issue with VR Puzzle games, and this definitely isn’t a slate specific to Tentacular, is that when you’re confused about what you’re doing, being fully immersed — even if while standing in an open ocean — can start to feel quite claustrophobic.

Keep working through it, though. Keep pushing on and, unlike some other VR Puzzle games, it really becomes a game that just keeps giving. The optional side-missions are totally worth it, and I’ve let my kids play in the sandbox mode after I’d finished most of the campaign and they had an absolute whale of a time. It’s funny before all else, and incredibly memorable. Perhaps most of all though, it’s very tactile and responsive. Although I complained about fiddliness it always felt like it was on me rather than the game, and the controller feedback and in-game bounce and micro-animations were perfect.