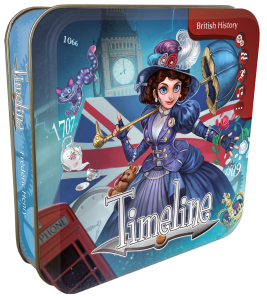 With an absolutely vast number of options to choose from across the Timeline range, I couldn’t resist the potential satisfaction of crushing my family and friends with the British History edition of Asmodee’s compact and expansive series.

Every version of the Timeline series of games is an attractive proposition, with each one featuring an eye-catching design standing proud on an embossed steel tin. The British History edition that I’m looking at right now, distributed by Esdevium Games, features either a quintessential (or stereotypical depending on your viewpoint) image of a woman in late Victorian-era attire, who I am fairly sure is meant to be a hip and modern re-imagining of Mary Poppins.

Inside the tin, British History has 110 cards secured inside two trenches along with a brief manual that makes the very simple concept of the game sound just a bit more complicated than it needs to. I’m probably being a bit harsh there though, because whilst the name of the game is a sufficient enough clue for any experienced gamer to work out everything else unaided, casual players will appreciate the clear description of the game structure that the manual provides.

Component quality is quite high for the price, with the outer tin being quite lovely, and the cards themselves featuring generally decent artwork printed onto tough card that is coated in plastic that protects the faces. Each card has two sides printed with an identical picture and the name of the event it depicts, and one side of each card also details the year that the event occurred. There are very few dull pictures, although some capture the nature of the depicted event better than others. If I have a material complaint about the components in Timeline, it has to be that the cards are quite small compared to the size of the box, so either the box should be smaller or the cards should be bigger. 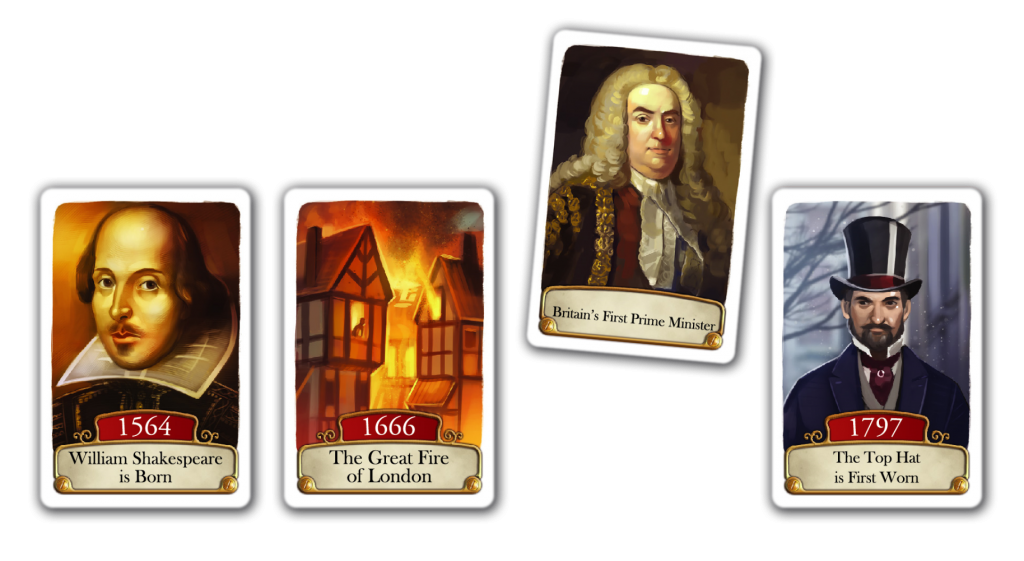 As I said earlier, Timeline is a simple enough game. Basically, each of two to eight players draw four cards (or more if you’re an experienced player) from the deck and place them on the table in front of them, date side down. The deck is also date side down, except the first card which is placed date side up, as the first card in the timeline. Players must then take turns to place one of their own cards into the timeline, either before, after or in-between the cards that have already been placed. As each card is placed, it is turned over to see if it has been placed correctly. If it has, then the next player takes their turn, but if the card is placed in the wrong date order, it is discarded to the box and the player who placed it takes another card from the face down pile. The winner is the first player who has no cards in front of them.

Timeline in a short game, lasting perhaps only ten or fifteen minutes on an average play through between players of mixed age and education level. It can be much, much quicker if the average player age is higher, or if there are any subject matter experts involved. All variants of the Timeline series tend to favour experienced players, as there is an aspect of memorising the card order to consider, and it won’t take many games for anyone to realise which cards bookend the set – the formation of the British Isles and Brexit, in this case.

To combat this, Asmodee does promote the fact that each set of Timeline cards can be merged with others, but I find this approach has mixed palatability – for example, I didn’t much enjoy mixing Timeline: British Isles with Timeline: Star Wars. I don’t own any other Timeline game, but I expect something broadly historical like Inventions might merge better than Star Wars did. Star Wars on the other hand probably merges well with Cinema, but they are not really the subjects of this review. 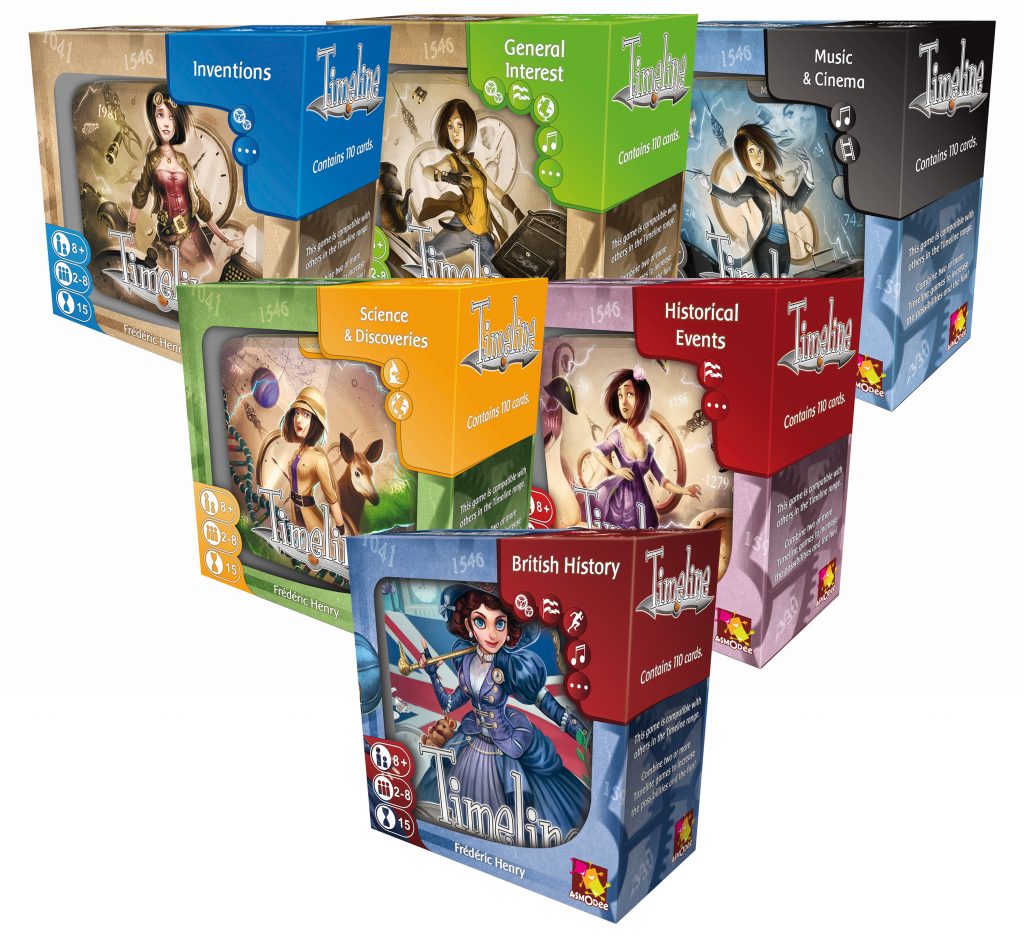 I’ve played Timeline: British History extensively for about ten days now; with my fiancée, with my two and a half year old (not much competition there) with my extended family and friends, and all agree that it’s a solid way to spend an evening. In our case, we’re on our annual family holiday in France, so the evenings are long, the wine is cheap and the children are up much later than usual. This makes Timeline: British History in particular a favourite, because it’s a short, simple game that anyone can play, and it promotes the subversive delivery of educational content into young minds.

Timeline: British History has a regular RRP of £13.99, and a copy was provided for review purposes. Timeline games are available via 365 Games or through this handy Store Locator.