If you’re looking for a flight stick and accessories for your PC you’ve got more than enough options; that isn’t quite the case for console gamers. While a few USB options are available, Thrustmaster’s T.Flight Full Kit X is now one of the easiest ways to get the full experience on games like Elite: Dangerous and Microsoft Flight Simulator.

When I was growing I had a demo of a flying game on my shiny Windows 95 PC: Fury3. God, it was magnificent; enemies snuck up on you causing deadly dogfights, the maps were humungous and you had to have quick reflexes because the terrain, especially close to the ground, was incredibly unforgiving. On the other hand, I also had a republished, jewel case version of Frontier: Elite II, and sometimes tried my hand at blasting my way through space and trading above the heavens. Two very different games, but both examples of the type of game that calls for more than just a keyboard. Anybody who played games that long ago has probably already tried their hand on more than a few flight simulators, or other flying games, but aside from the massive changes in graphics, another thing has changed. Back then it seemed that only the most dedicated player would actually shell out for a flight stick whereas now they’re actually a fair bit more affordable, and for a great HOTAs set up with pedals — like The T. Flight Full Kit X from Thrustmaster, to be available for less than £200 feels quite ridiculous. 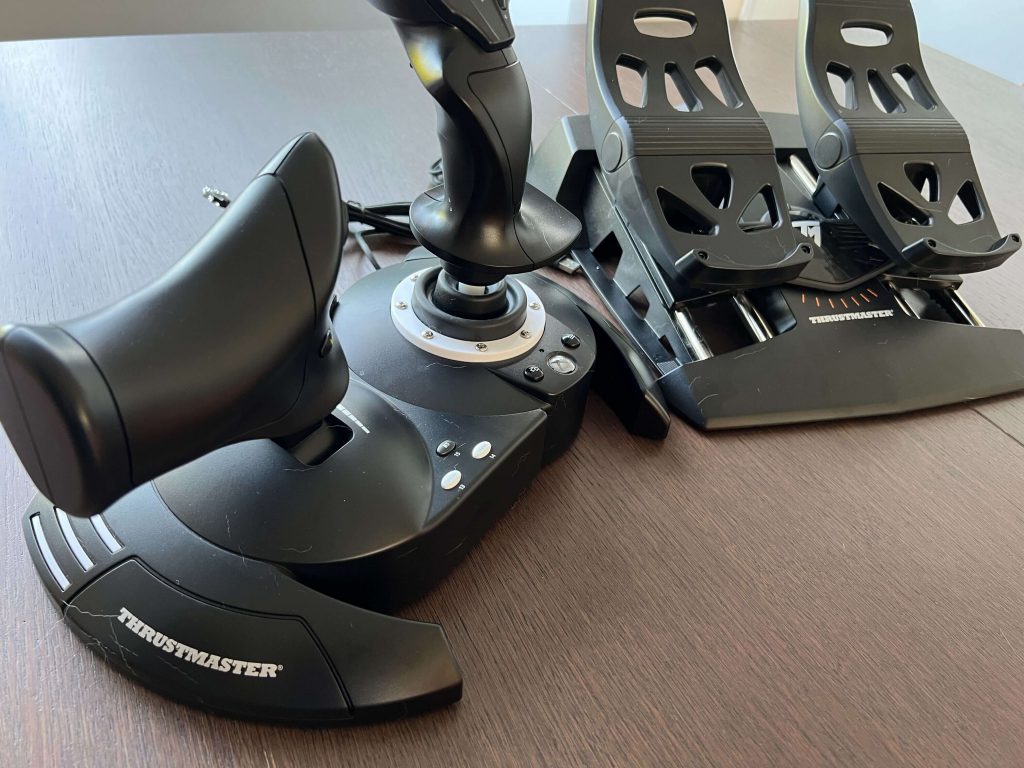 The T. Flight Full Kit X is a combination of the T.Flight Rudder Pedals and the T.Flight Hotas One, the latter of which is something I’m incredibly familiar with as I’ve owned one before, and they seem to be a lot of people’s first Hotas. This deal scores people a hefty saving, which is great for those looking to level up their hobby. Thrustmaster has a reputation for their flight simulation peripherals, with their three-decade-long history actually starting with joysticks, despite some people knowing them for their racing wheel deal with Ferrari. I think it’s maybe the latter, or general lack of education about plane pedals, that cause most people to skip over the Rudder Pedals, but that’s a mistake.

It’s a mistake because rudder control isn’t actually controlled through joystick in most vehicles, and when it is left to the stick most people have to make the choice between that and yaw control at points in a turn. Yaw, however, is the pivoting sideways, while rudders are the flaps on the back which influence left and right heading. The former is like tilting your head to the side, while the latter is like turning your head from side to side. These both have a place in flying and while the joystick can be twisted to yaw, if you imagine twisting your wrist, gripped, to the left, while also trying to pull it down and away from you (to dive to the right while changing your facing to the left) then you can get a very quick idea of why using the pedals simply makes sense for finer, or more finessed manoeuvres.

Unlike some premium flight sticks, the T.Flight Hotas One isn’t modelled on an existing plane set up. That doesn’t mean that a lot of care hasn’t gone into the design, however. For a start, the Hotas One is cleverly designed to clip together for easy storage, but not only that, while attached it also happens to be a really natural feeling position to play in. However, if you do want to separate them then it’s easy to do and you can move the two pieces about half a metre away from each other, giving you a lot of options for moving them around your playing space. If you do keep them clicked together then there’s a wire channel underneath the side of it, allowing them to sit flat on the desk. 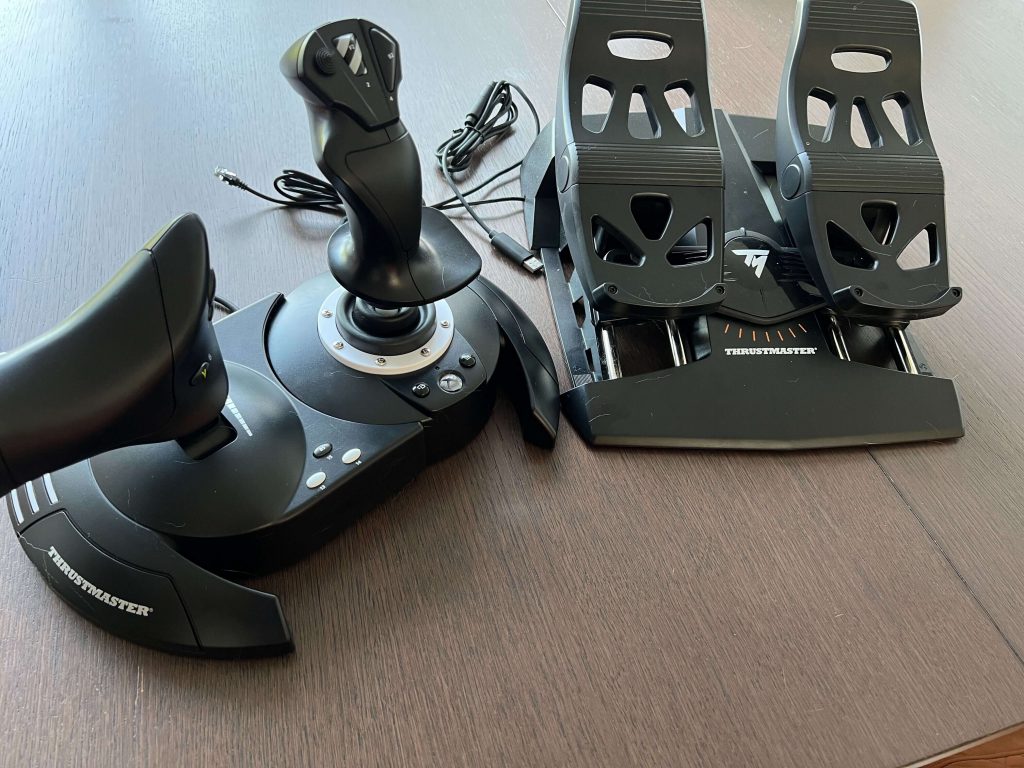 Rather than going for that realistic design, which could certainly be a case of function over form, the T. Flight Hotas One is designed ergonomically. It feels great, and even the wrist rests and grips themselves feel like a great fit for my hands. I actually, as I’ve mentioned a few times on the site, have a misaligned right thumb due to an accident many years back, despite that it’s still really easy to reach the buttons on the top of the stick. In fact, the only real design flaw present is that the HOTAs itself, the hands-on throttle, doesn’t give much resistance, and so sometimes you need to pay attention when shifting it about, especially if you’re trying to manually match a speed.

Layout-wise — and, this is especially worth considering because it’s Xbox compatible as well as PC — the Xbox face buttons are over on the throttle, near your right thumb. The central Xbox button, and its two neighbouring buttons, are located at the base of the joystick. You can navigate menus using the hat switch input on top of the joystick and the bumper inputs are paired with triggers and bumpers around both components. There are a lot of buttons, easily over a dozen, which is more than enough for you to do a little remapping of keys if you change into a game that doesn’t happen to have full, out-of-the-box controls. That said, even on PC it’s still best to have a controller on standby in case the game features areas where you’re no-longer flying (like driving the surface vehicles in Elite). 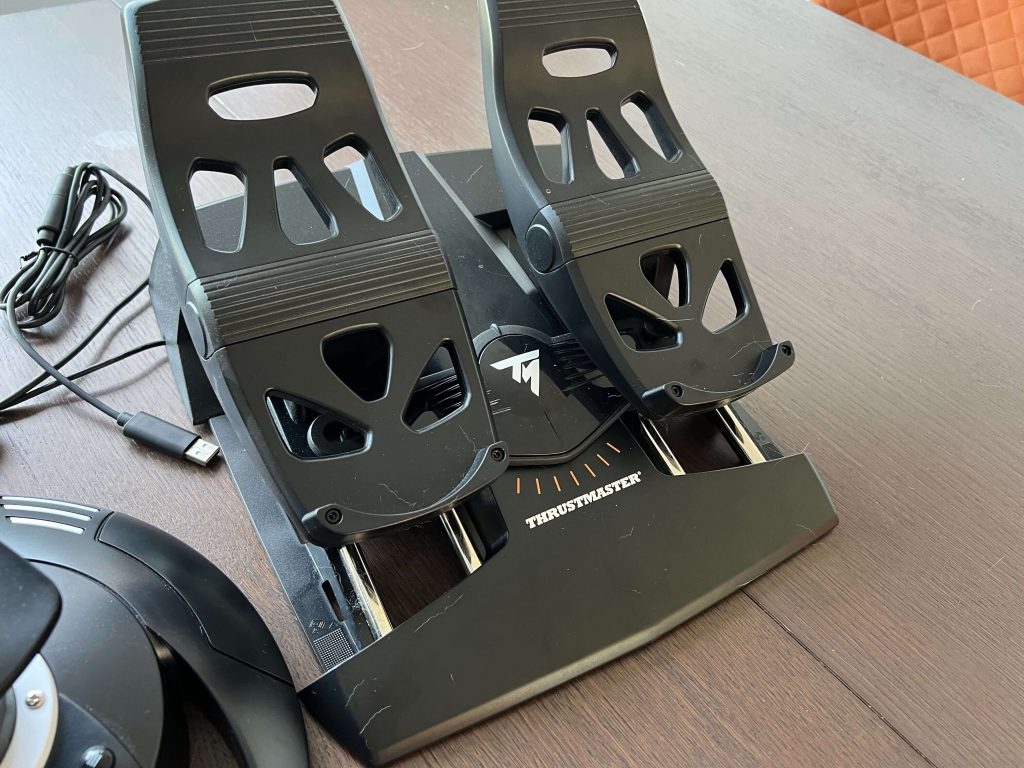 Next comes the Rudder Pedals. These are great, I’ve never used them before and so wasn’t quite sure what to expect. I drive, and I’ve used pedals in racing games, however, these are incredibly different: They slide. They run on a ‘S.M.A.R.T’ system, that’s Sliding Motion Advanced Rail Tracks, which means that the pedals slide along their own rail system when pressure is applied in the right way. Others have similar features, but this feels incredibly smooth, with no hint of jarring or juddering.

Now, there is one issue that I’ve not mentioned yet, and that’s the length of the wire. For me, a PC player, it’s not much of an issue, the 1.5m cable doesn’t need to be anywhere near that length, even if I wheel my chair back from the desk a bit. However, if you’re playing on Xbox and your sofa is a way back from the TV, or the Xbox is tucked away in a cabinet, then it might be a bit of an issue. USB-to-USB extenders will work, but it’s something to be aware of before you excitedly unpack it to find you’re sitting too far back to use it properly.

Only recently we’ve seen things like the Top Gun expansion for Ace Combat 7, and a massive amount of attention going toward games like Microsoft Flight Simulator, if that — or something like War Thunder or Elite: Dangerous — has called out to you then the T.Flight Full Kit is definitely something you should be looking into.

You can purchase the T.Flight Full Kit X on Amazon.