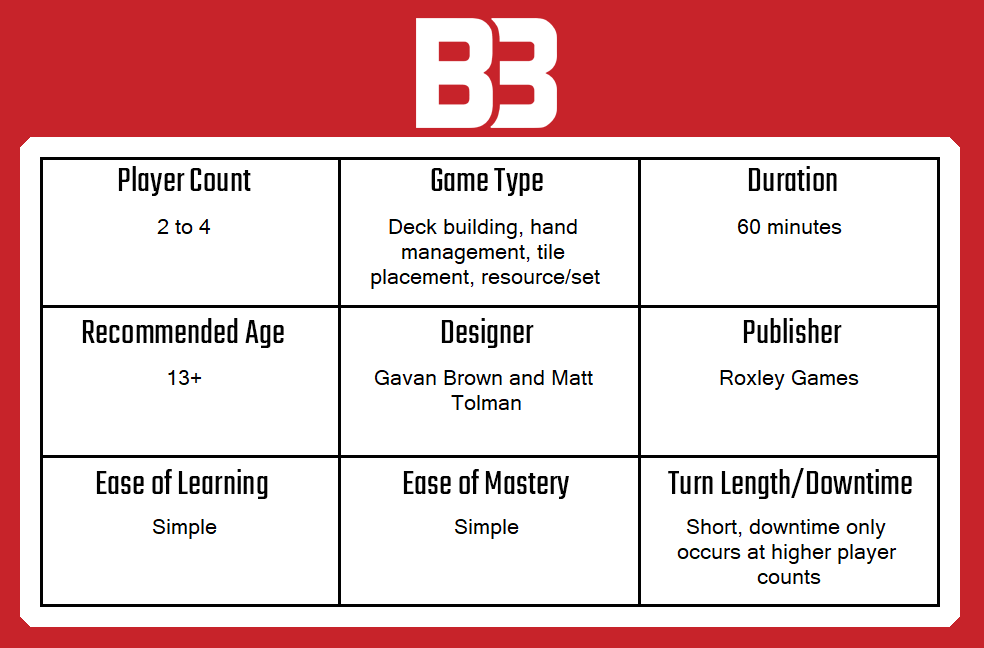 You have been chosen to lead an elite crew of Pod pilots who will delve below the surface of Mars in Solarus Corporation’s first major drilling expedition. As a part of this maiden voyage, the corporation has agreed to let you reinvest any wealth you uncover back into training your Pod pilots, increasing their skills and efficiencies. Will you be remembered as the greatest Solarus Corporation employee in the galaxy? 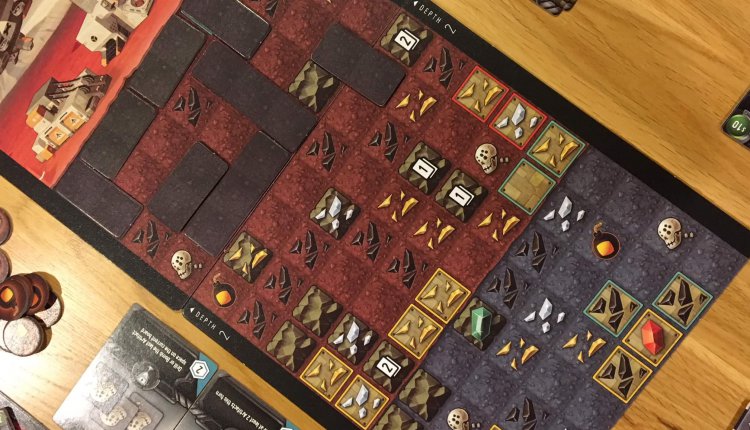 Super Motherload is a card driven board game that features simple mechanics and quick turns, but offers strong variance and a fair level of strategic depth, without ever strongly disadvantaging even a brand new player. Each of up to four players is presented with a hand of basic cards, a bomb token and four stacks of upgrade cards that are placed nearby. The aim of the game is to amass victory points by upgrading the starting hand of cards and by achieving both major and minor achievements that are placed in a shared area for all players to access.

Cards drive all of the action and in order to upgrade them, players must mine deeper and deeper beneath the surface of Mars. In doing so, the players will be able to collect resources which are then placed directly onto one of the card stacks in front of them. If the value of the resources exceeds the buy price for the card, then it is taken and added to that players deck, usually in the discard pile. As players work down each deck of cards, the cost to buy increases, as does the power of the card and its victory point value.

As players drill further and further downwards, they will eventually reach the bottom of the current game board and may then take the next, numbered board and place it below, using either face. There are four boards in total, of which three are used in a two player game and all are used at three or four players. In addition to basic resources, boards also contain a number of other bonuses such as artifacts that offer randomised, unique benefits and blocks that allow players to draw additional cards, for example. There are also stone blocks (that can only be bombed) and steel blocks (which cannot be bombed and must be drilled) so whilst some combinations of block are very lucrative, you’ll often need to maximise the rule breaking powers of your card deck to mine them. 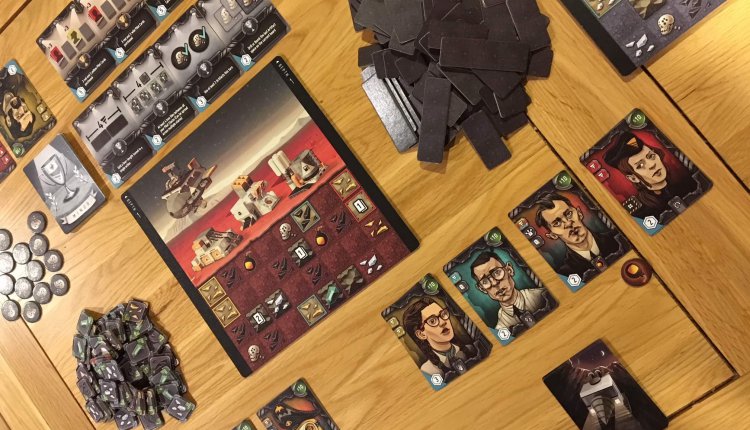 The components in Super Motherload are very good, overall. The art style is quirky and certainly a little bit wacky, but it fits the game and, if nothing else, retains a great sense of individuality. Everything is made from good quality, thick cardboard and there are no plastic or metal pieces, which given the attractive price point is certainly something that I think is a sensible decision. Only the resource, artifact and bomb tokens might have been replaceable with plastic or wood, but the reality is that cardboard does a better job of tying the artwork together whilst also being much more functional thanks to having a printed value as well as a visual representation. Artifacts simply tell you what they do on the back.

The boards themselves are printed in slightly dull colours and if I was nitpicking, I think I would have liked to see perhaps two or three more of them to increase the possible combinations in the game. That said, this isn’t a major problem because it’s not as if boards have any hidden information that an experienced player can benefit from as a result of memorisation. Similarly, the achievement cards are all a little bit indistinct, but they are functional and don’t play a large role in the game that means you’ll mind much.

The main thing that players will handle, of course, are the cards. Each of this has really distinct artwork that really drives the personality of the game, but most importantly they are made from good quality stock and include all relevant information presented in a clear and accessible way. The manual is large and printed beautifully, with very clear instructions that leave no doubt about what to do – examples are used and the layout is very well handled to separate information logically.

On each turn, the player may perform two actions from a possible three. The options include drawing two new cards (which may require reshuffling the discard pile to form a new draw deck, drilling or bombing. Whilst the draw action is as straightforward as it sounds, drilling and bombing is driven by the cards in hand. Both bombing and drilling actions must be taken at either surface level, or to continue an existing tunnel, although it never matter who made the tunnel or extended it previously.

Drilling is the most common way to progress the game and it allows the player to tunnel a number of spaces in any straight line based on how many drill symbols they play on one or more cards. Whenever a player wishes to use more than one card and add the drill symbols together, those cards must either be of the same colour or wild (which is when a card shows all three of the main colours.) When taking the bomb action, players must use a red card (which will also demonstrate the bombs blast pattern) and a bomb token, which is a consumable that can only be replenished with further exploration beneath the surface.

Turns in Super Motherload are generally fast and extended procrastination is quite rare. There are few on board features that will cause players to ponder too long because all options are broadly similar in power level. Do you want to try and take a higher resource value to unlock a new card (which will score victory points) or do you target a nearby artifact that may also score a mini achievement and give you a powerful ability? Players are driven towards the same objectives and Super Motherload is a symmetrical game, so securing victory is mostly about maximising the efficiency of each turn. 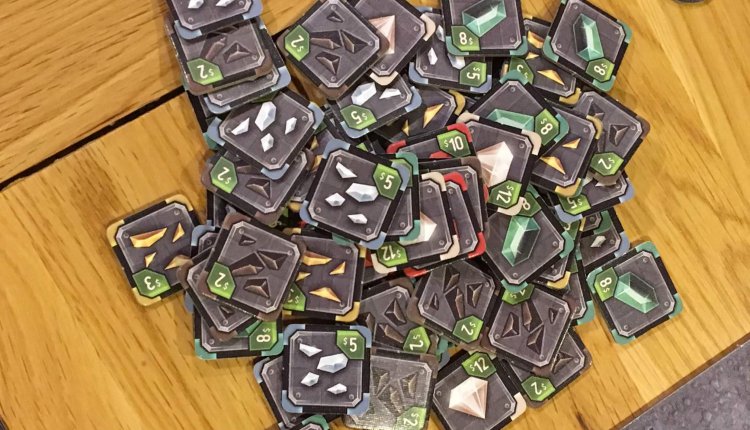 As a result of its symmetry, the access to public objectives and the relatively straightforward mix of different strategies available, Super Motherload is a game that is easy to pick up and offers real excitement during the first few games. I didn’t find myself at any particular advantage when playing with new players because all tunnels are open to anyone and everyone has their own deck of cards to invest in. I do think that it would have been interesting to have some powerful cards that anyone could access, although it would be mechanically challenging to introduce.

Whilst it is quite subtle, experienced players will show an edge by ensuring the efficiency of each turn. Thus, over the course of a game, they will likely draw more minerals and be able to spot when to take an artifact, prioritise purchasing a card (each of which offers a bonus when purchased) or target an achievement along the way. In any case, despite that, games are almost always fairly close and in general, the game remains highly competitive until the very end.

With perhaps twenty games in the bag, I am now finding that the game has peaked and levelled out in terms of my own excitement about playing it, but it still never fails to attract and retain the interest of casual players. It also deserves some credit for having a fairly unique game system that I don’t see replicated anywhere else in my collection. That, along with the ease of teaching means that I think I’ll always be able to find a place on the shelf for Super Motherload whenever I want to play something a little more interesting than normal, without taking hours to do so. 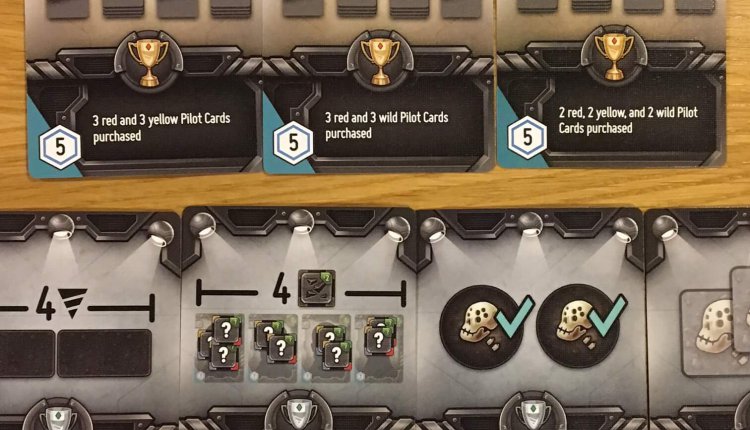 A lot can be said for casual games that appeal to both experienced gamers and newcomers alike, especially those that present a relatively level playing field for all concerned. The relatively shallow depth of Super Motherload‘s strategic options is masked quite nicely by the way that each board has been built in quite a balanced way. There is very little direct player interaction (which is either a good thing or a bad one) but what I have noticed is that there’s no such thing as a quiet game of Super Motherload – it’s a jovial, backslapping kind of game where the board changes considerably between each of any one players turns.

I think Super Motherload is a really fun game that I will enjoy for a long time to come. As is always the case with reviewing games, I have played it intensely for a few weeks now, which means I feel a bit jaded towards it. Brought out once a month or so, before, after or between heavier games, I think I’ll keep coming back to it – and so will you.

You can find out more information about Super Motherload on the website of publisher Roxley Game Laboratory.