Super Jetpak DX is a game where building your rocket and blasting aliens will help your astronaut get back to their home.

Super Jetpak DX takes the original fun, non-stop action ZX Spectrum title, Jetpac, and somehow makes it even more retro. With elements of Breakout and Joust, this retro-styled arcade platformer was a critical success when it first launched back in the ‘80s, but now it’s been transformed into something else entirely. This Game Boy title is a weird throwback to a system that certainly could have released such a title, but for some reason never did, and so we’re at the odds of having a game that gives us the best of the retro era but released within the last year.

Your goal in Super Jetpak DX is simple enough: fly your Jetman around and collect your spaceship pieces, drop them off to form the full ship, and finally collect enough fuel to blast off. You’ll be doing all of that while avoiding alien creatures that will kill you in one hit, but you have your trusty laser gun to help you dispense of them quickly. Once you are fueled and ready to go, you simply need to make it to the bottom of the ship to take off, finishing the level.

Fuel drops from the top of the screen as an encapsulated icon, along with other icons and items that can either benefit or hurt you. Confusion icons will cause your controls to be reversed, really throwing you off if you happen to accidentally hit one, and death icons will instantly kill you. Thankfully, there are a lot of items that will add points to your score such as diamonds, but the most beneficial icons either give you a protecting orb that rotates around your astronaut that instantly destroys enemies on contact, or a shield that keeps you from being hurt. 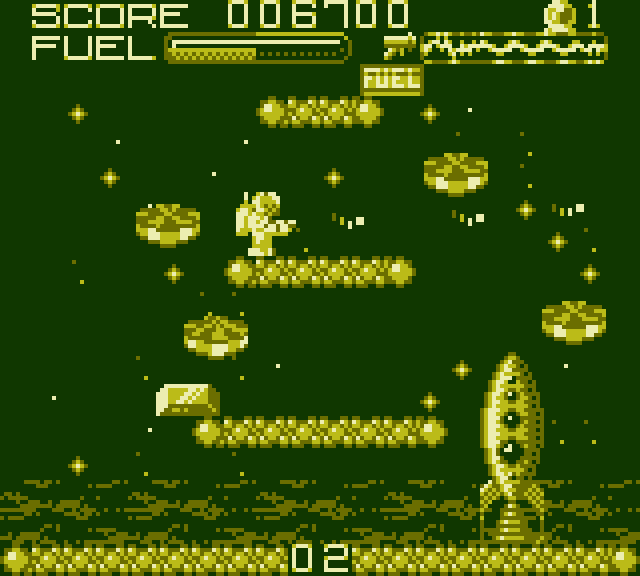 While the core gameplay is easy enough, mastering the feathering of your jetpack takes some getting used to. You can hover, however, if you hold down instead, which can keep you stuck at a level height when you’re trying to get the bead on a baddie. The physics employed in Super Jetpak DX is certainly some of the best parts of the gameplay, as they are surprisingly fluid on the Game Boy platform, and you never really feel like you are anything other than fully in control of your little astronaut as he blasts and collects his precious cargo.

The second level of each area has you landing on a planet in your completed rocketship and simply collecting fuel instead. These levels allow you to focus more on racking up your score but are filled with more difficult enemies than the first one. Either type of level only requires you to carry either the ship pieces or fuel to the column where the ship is being constructed to apply it to the current task, which in turn allows you to focus on eliminating the bad guys instead of pinpoint landing each piece and fuel canister. 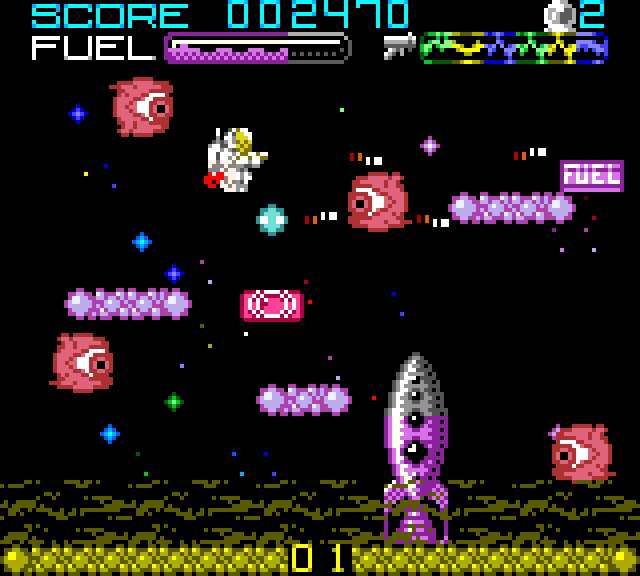 There are three different difficulty levels, ranging from ‘Fun’ to ‘ARGH!!!’ and each one offers a fair challenge to enjoy. It’s best to work your way up through the ranks as you personally get better, but it’s nice to have options to continue to push yourself after you roll credits. Your high score can even be seen on the title screen when you load the game, giving you something to top on your next run. With sixteen levels to battle through, there’s plenty of game here to learn and master.

As far as loading this game up, there is both a physical and ROM option when purchasing Super Jetpak DX. No matter which way you choose to play or what hardware or software you choose to utilize, the game has you covered. The game intelligently knows whether you are playing it on a color-capable system or in traditional green and black and gives you some options. For the original Game Boy, you are given the choice of playing in a dark or light mode, which basically inverts the colors used to allow you to be able to see the sprites better, but it’s merely a matter of preference. The color mode looks brilliant on the Game Boy Color and Game Boy Advance and this is obviously — given the aptly named ‘DX version’ — the best way to play. 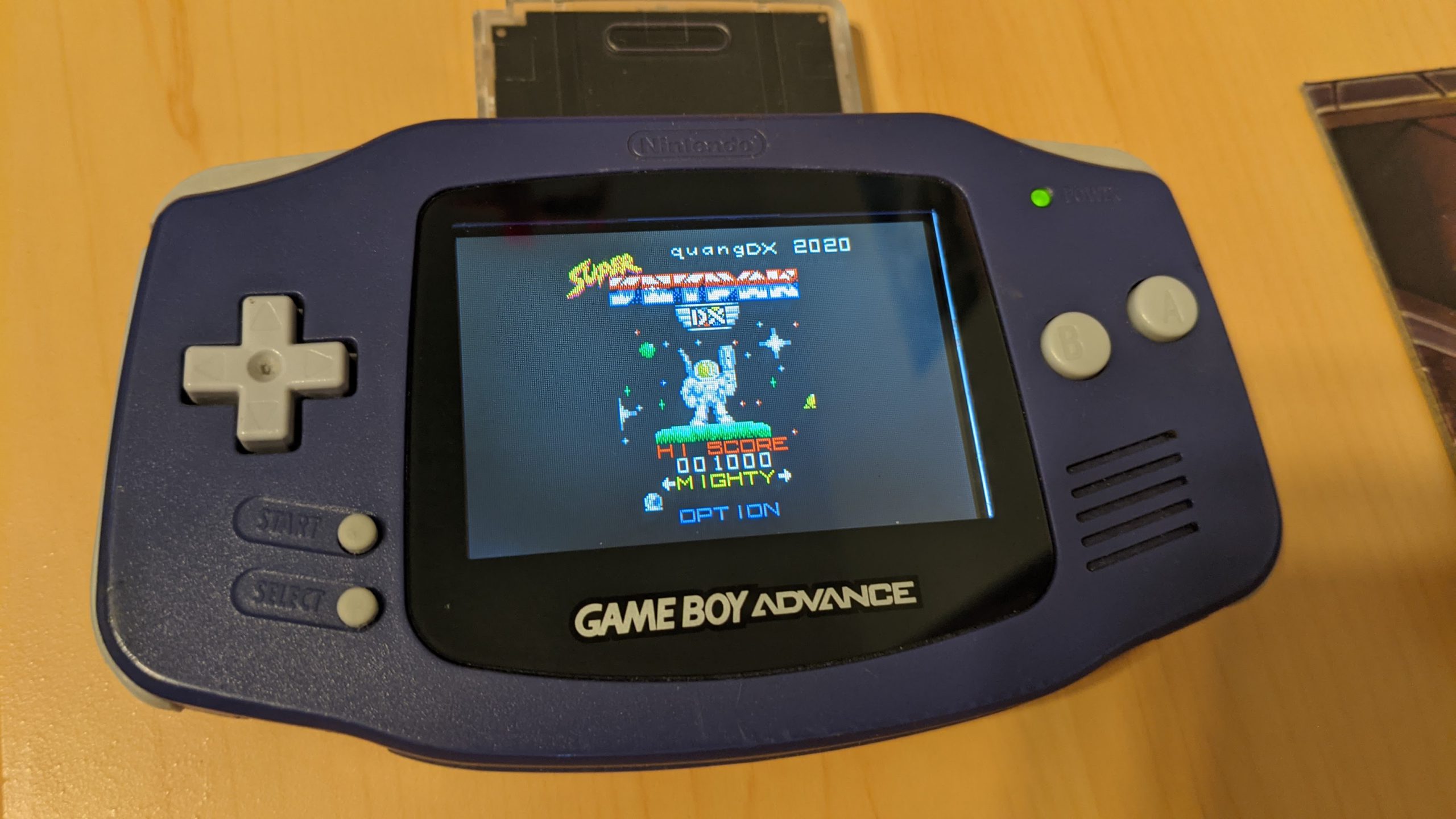 I can’t help but bob my head when the music begins pouring out of my Game Boy’s speakers: the main track that plays during gameplay is a veritable jam. I love the sprawling melody that really gets you in the mood to play another round. It’s easily my favorite part of this game and gives the main gameplay loop a pleasurable audioscape as you blast away at numerous assailants and snag fuel for your next flight.

Super Jetpak DX is a relatively simple game that extends its play by offering difficulty options and score-chasing play that keeps you coming back for more. The insanity of this Game Boy title that does physics so well really impressed me, as it’s purely a joy to play, and will likely see regular rotation in my handheld. If you’re a fan of old-school graphics and gameplay, this is an absolute must-play title and worthy of you seeking out a physical copy to really seal the nostalgic experience of it all.

Super Jetpak DX is available now at Pocket Pixel, in both ROM and physical cartridge pre-order.