We all know what to expect from Mythic Games at this point; huge boxes of plastic, cardboard and neoprene supported by elaborate, customised inserts. Regardless of what’s come before though, nothing could prepare me for the sheer “massiveness” of Super Fantasy Brawl. This is probably the largest box in my collection today, and with a Super Fantasy Brawl: Round 2 now on Kickstarter, I can only imagine the need for more shelf-space increasing.

Upon opening this vast box, I will admit to being a bit surprised about the amount of empty space I could see, but all the same, my Kickstarter Deluxe edition of the first Round of Super Fantasy Brawl contains a ton of stuff. There are twelve massive character miniatures – built to a scale larger than any I’ve seen before and therefore, I can’t tell you what it is – and then three even bigger miniatures to represent statues that make up part of the board. 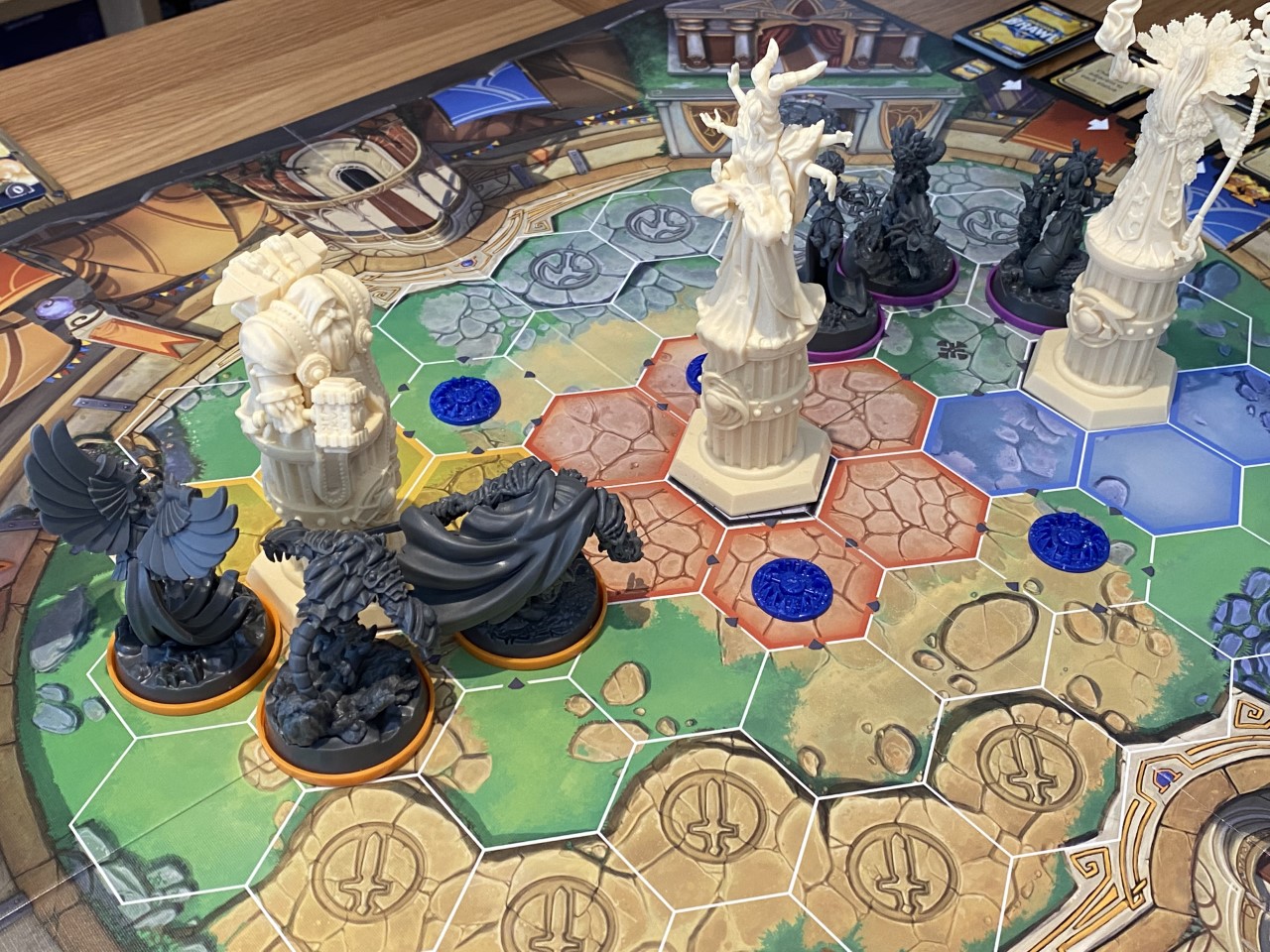 Each of these miniatures is housed in its own customised tray, and in this Kickstarter version, there are both plastic and cardboard  tokens for things like trophies, health and traps. In the standard edition, I understand that only the cardboard tokens are present, and the statues that I mentioned earlier aren’t included, but either way that’s not a huge problem from a gameplay perspective.

Perhaps more importantly is the fact that aside from these things, the only other material content inside Super Fantasy Brawl is a deck of cards for each character, a giant board, a set of objective cards and a rulebook. What this said to me, within five minutes of looking at the game, is that Super Fantasy Brawl was going to be relatively straightforward and very focussed on the interaction between these larger-than-life characters. 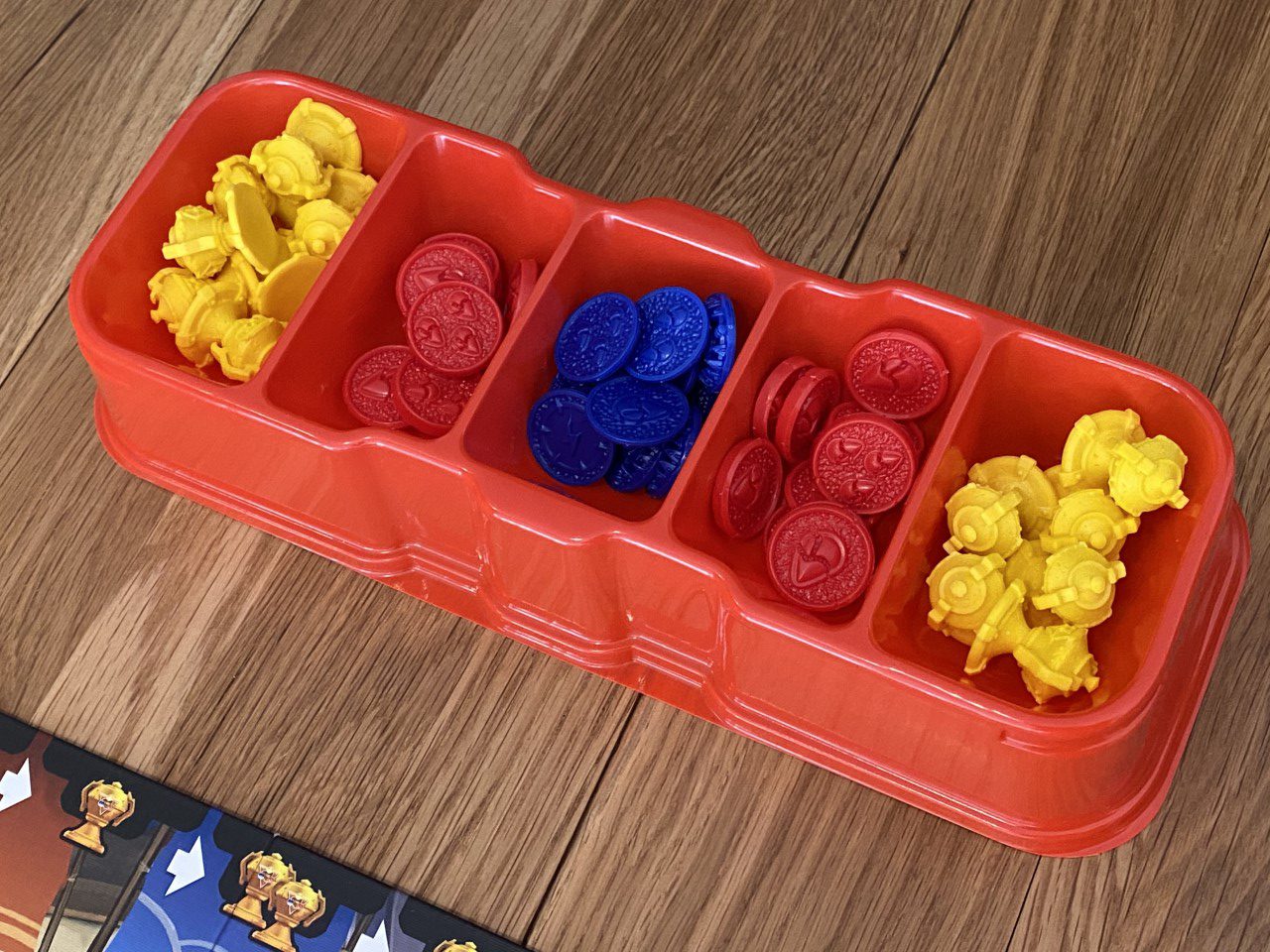 As it happened, on the day that Super Fantasy Brawl arrived, I was at home from work and my eldest daughter had already completed her school work for the day. Bearing in mind that she’s six years old, I decided to take the risk of attempting to play my first learning game with her controlling one of the two rival teams and at least directing the action – even if she couldn’t get to grips with the card text.

To my surprise, Super Fantasy Brawl is actually straightforward enough that she was able to play, yet as I would discover in my later games with older players, there is also enough strategic depth here for players of all ages. This is down to that deck of objective cards that I’ve just mentioned, and the way in which players score and win a game of Super Fantasy Brawl. 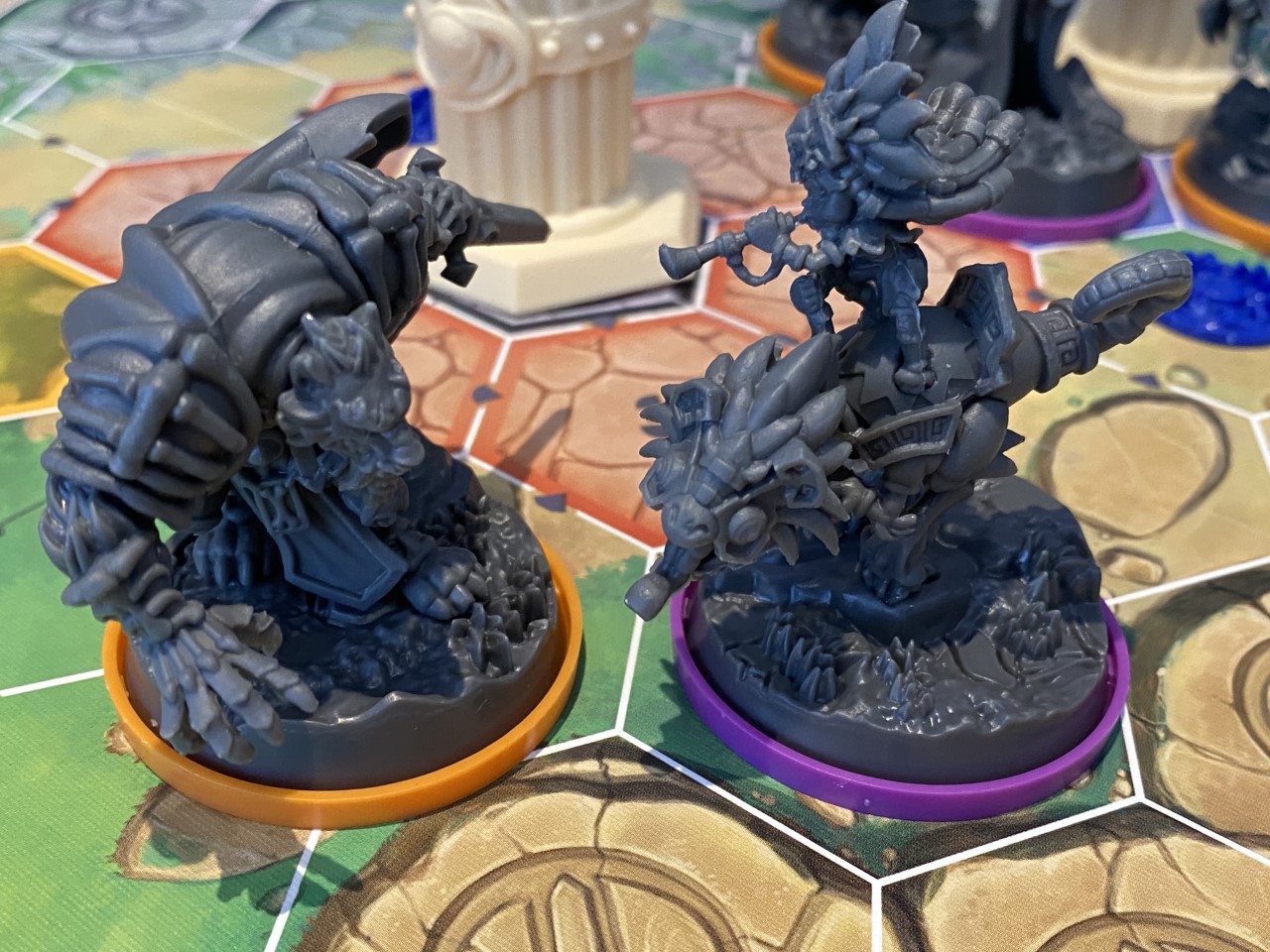 In a nutshell, the first player to score five trophies wins the game. In a standard one vs one game, the players will do this by selecting a team of three characters (my daughter chose a very aggressive team made up of visibly female models) and then using them to fight it out on the board. Defeating an enemy character awards one Trophy, but that’s not always going to be your focus. Those objective cards I mentioned come into play each round and are worth zero Trophies, then one, then two, then one again (before disappearing) as the rounds elapse.

What this means is that at any given time, you may be competing on the board to – for example – surround a statue, or occupy your opponents spawn zone, whilst at the same time both dealing damage to your opponent and protecting your own heroes. The pace of play is fast, with each turn consisting of up to three actions for the active player, which are dictated by three different coloured gems. 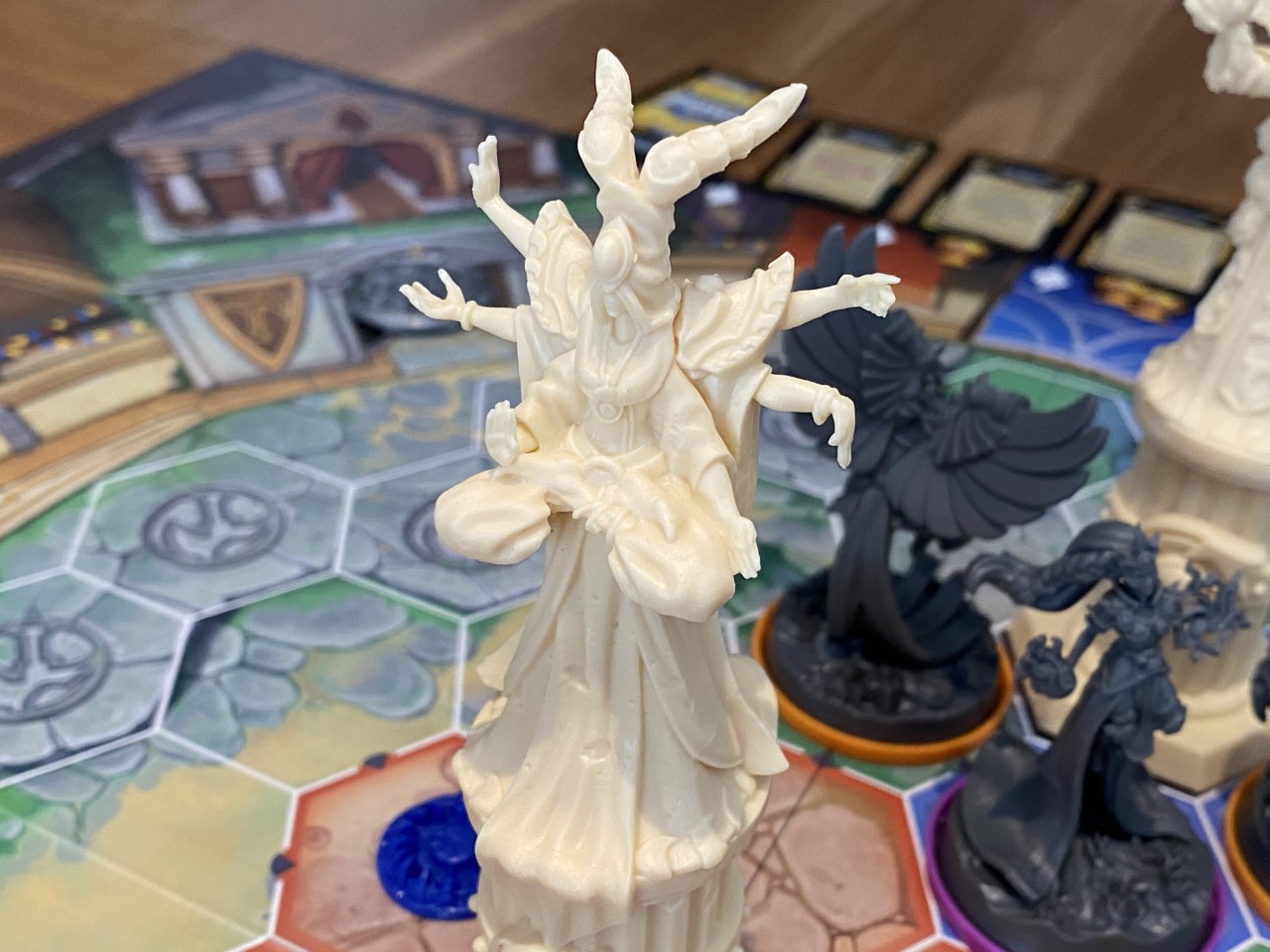 Flip your red gem over and you can play a red card from your hard – usually allowing you to move, attack or taken an action (or some combination) with the character shown on the card. The same applies to both your blue and your yellow gem in relation to cards that match those colours, but each gem can also be used to do a “general” action, like move, heal or deal damage – depending on the colour.

This system was so simple that I could (and did) teach it to a six year old, and she immediately understood it and began to strategise accordingly. Sometimes you will be looking at a wealth of options in your hand that really help improve the board state and that can be excellent, but when that doesn’t happen, the gem based system still gives you enough flexibility to have a powerful turn in the context of the objectives. It might not sound great to move two spaces and heal, but if it gets you into contention for a two Trophy objective, it is at least the equivalent of putting your opponent in Check, because they must either respond before your next turn, or else you will score those two points. 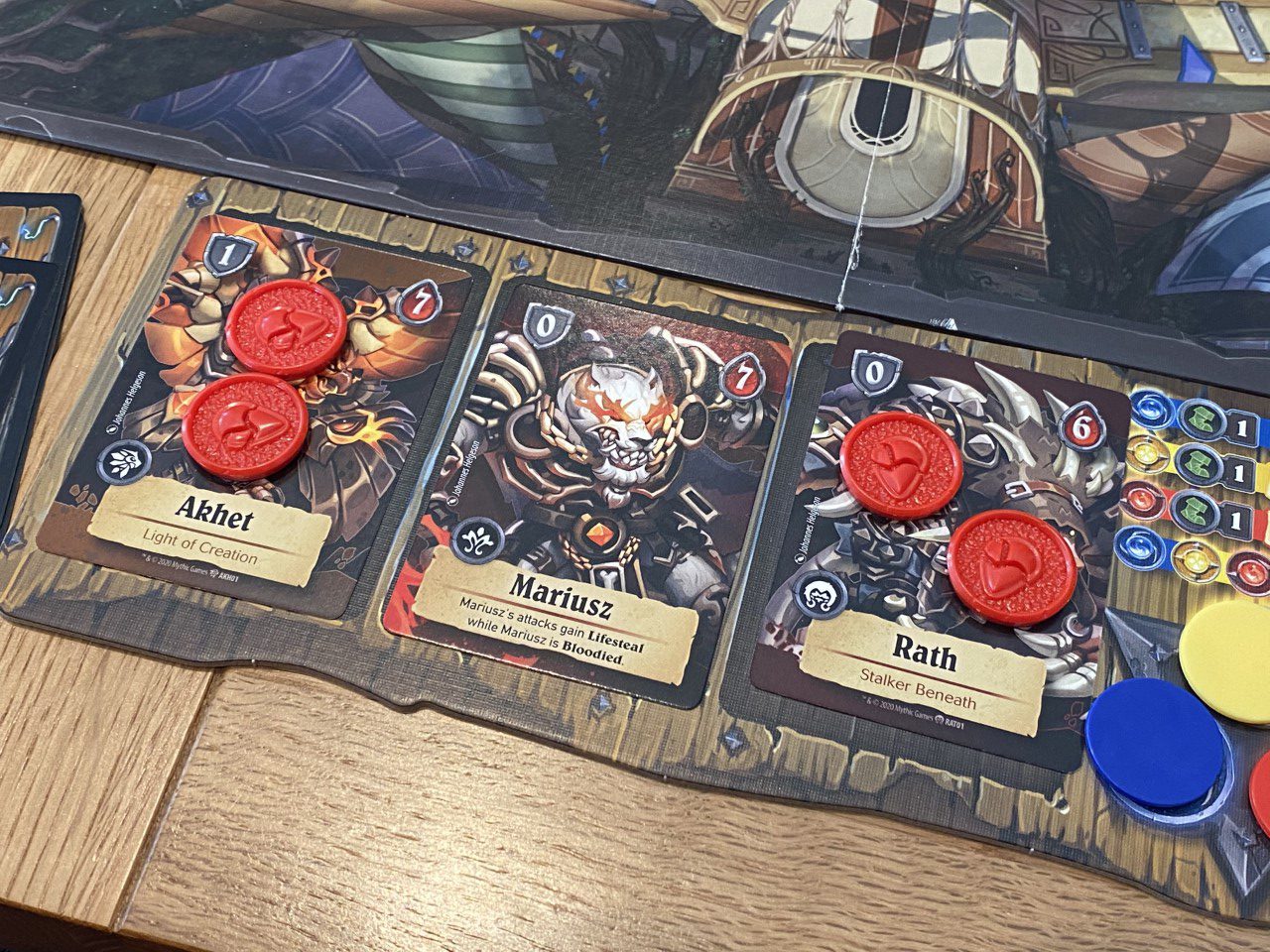 A few very minor complexities increase the level of interest for older players. The trap tokens, for example, will be setup at the beginning of the game and can be used by players to either funnel or restrict their opponent, or in some cases, deal damage directly. Effects that push and pull are present, so dropping a nearby opposing character onto a trap is a powerful benefit that can either do traditional damage, or sometimes add a negative status effect like stun.

With a very videogame feel and a super fast pace, Super Fantasy Brawl is a fantastic addition to the collection of any digital gamer who wants to impress their friends with a stunning analogue experience. For the more experienced board gamer on the other hand, Super Fantasy Brawl is a game that defies expectations. It’s simple and fun, whilst simultaneously smart and demanding. This is a game where team selection and drafting is as important as tactical decision making in game, and ultimately the strategy of bringing the most out of your team over the course of a game is what leads to victory. 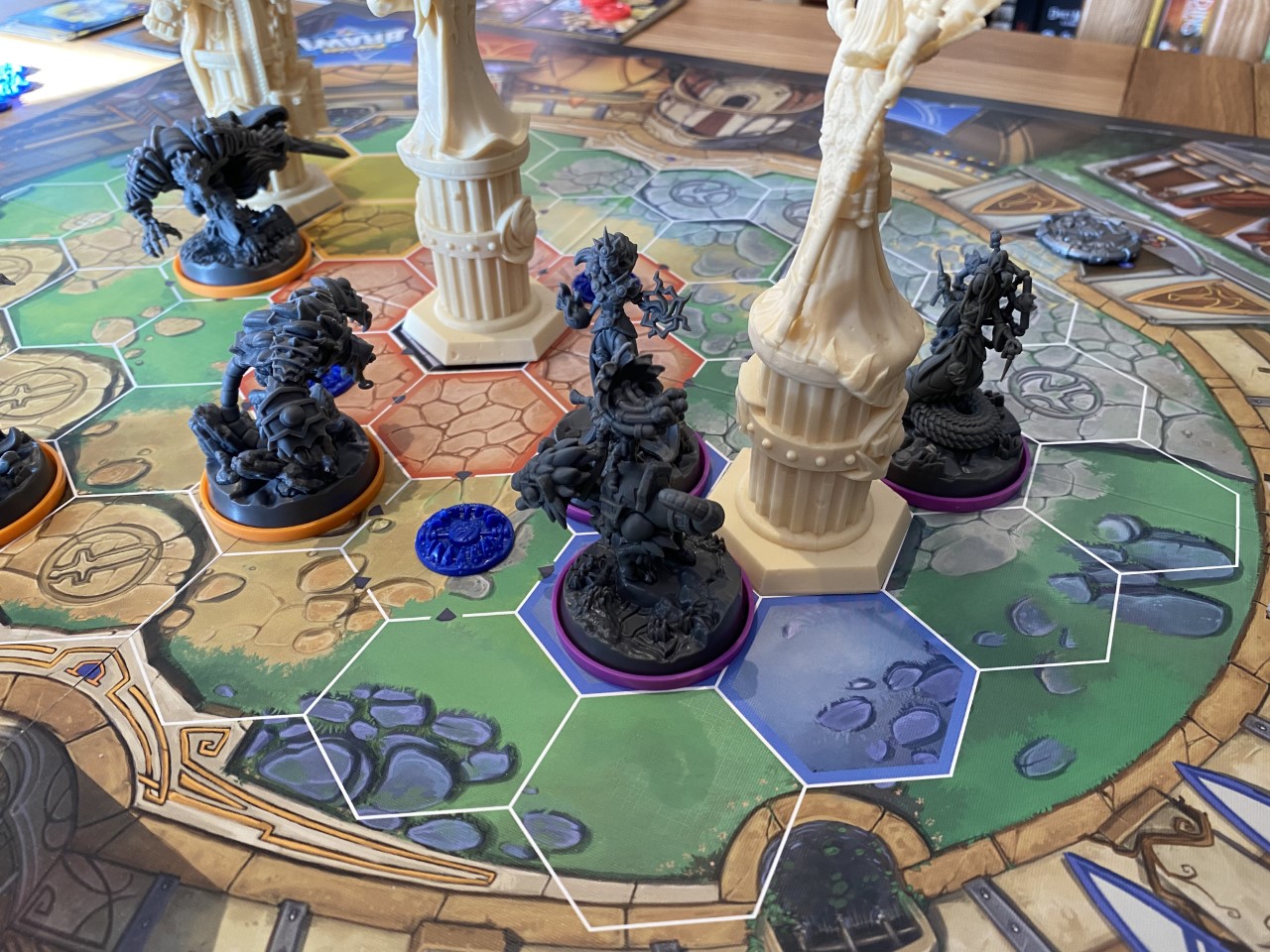 Super Fantasy Brawl is very impressive, and perhaps the only downside is the amount of space it takes up relative to what is in the box. It’s also not fantastic with any more than two players, although there is a fully functional team mode that accommodates four (and ca be played at three with tweaks.) All that said, I’m looking forward to seeing what Round 2 has to offer, and in my opinion this is a game that’s well worth checking out.

You can purchase Super Fantasy Brawl from the developer’s website.