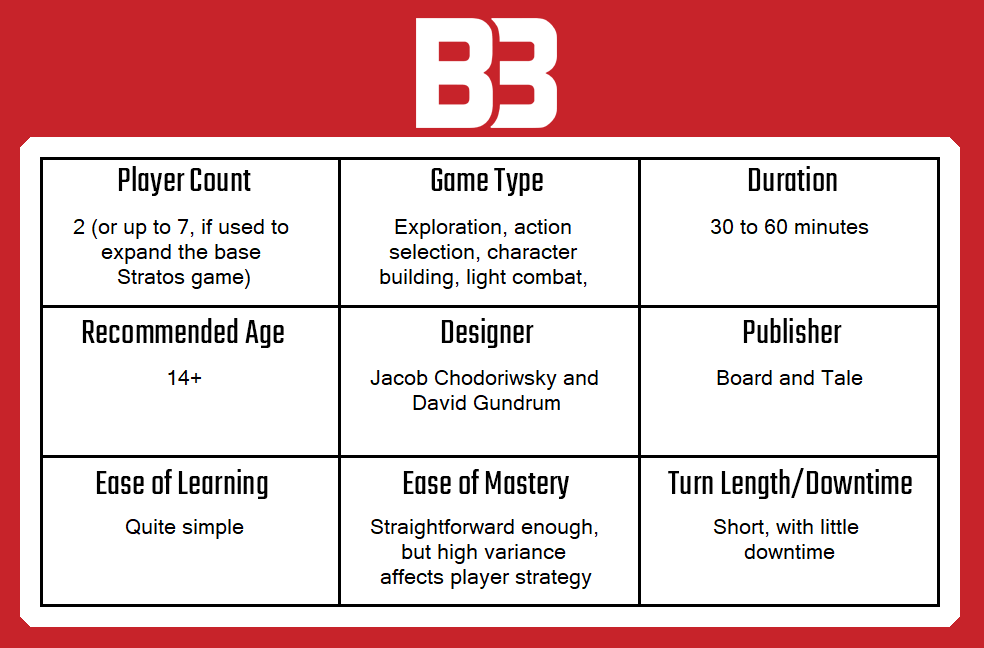 It has been a year since the five tribes of Stratos began their journey — each carving their own path to prosperity in the fabled land of legend. Plentiful resources have begun appearing along fault lines almost as if they were gifts from beings dwelling in the depths below. The people thought the gifts a blessing, but they could not have been more wrong… 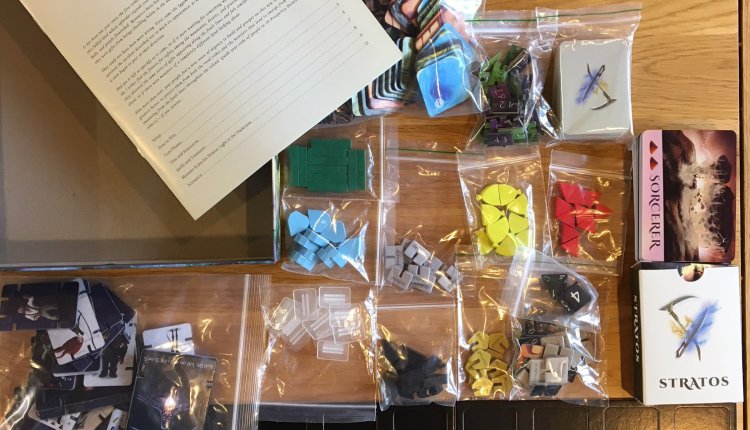 In Stratos: Light in the Darkness (which I’ll just call Stratos from now on), players each take control of a tribe made up (initially) of just one or two members. These tribes can then be built out via either recruiting new members or by promoting those already in play, both of which are paid for by working the land, exploring and by collecting the various benefits of doing so. The Light in the Darkness expansion adds monsters which were not in the base game, meaning that the game features both PvE and PvP gameplay.

The object of the game is to obtain a fixed number of of Prosperity Points (usually ten) which is something of a point salad due to the number of ways that it can be achieved. Defeating monsters, upgrading tribe members, casting certain spells and one or two other things deliver Prosperity Points, so whilst some will just be picked up by playing the game organically, others should become a particular focus in order to ensure victory.

There are a few different ways to setup the game, including two variants that are specifically laid out on the back of manual, but broadly speaking the players just pick a style of game from the included variants, then setup the board (usually randomly) and decide on starting tribe members. Personally, I had the most fun when the board and all features were completely randomised, with only the two special tiles positioned in an equally accessible, central position. The board setup pictured in the review is one of the preset configurations on the back of the manual.

The components in Stratos (and now I am talking specifically about Light in the Darkness) are excellent, especially given that it comes in a relatively small box. There are two decks of exploration cards and a pair of spell decks, all of which look great and fit with the artwork elsewhere in the game. There’s a further, slightly smaller deck of item cards which is just as nice, whilst the standees (both tribe members and baddies alike) are really nice and very characterful.

The rest of the components include several bags of small chits that interlock with the character standees to show their health, defensive posture and any items that are equipped. This approach is novel, although it does lead to a bit of wear on the cardboard pieces due to the continual motion of pulling the pieces off and putting them back again. All of the terrain tiles are fine, although I dare say that the board doesn’t look as appealing as it might if it had a bit more artwork on the black grid that they slot into.

The final set of components (aside from the manual) are the wooden pieces that represent the resources. Aside from being slightly overproduced for a game that doesn’t especially focus on resource collection, these are lovely. The manual itself does a very decent job of explaining the rules and is written in a pleasing, narrative style. Assuming I am actually playing the game correctly, I had no trouble interpreting it based on the manual alone. 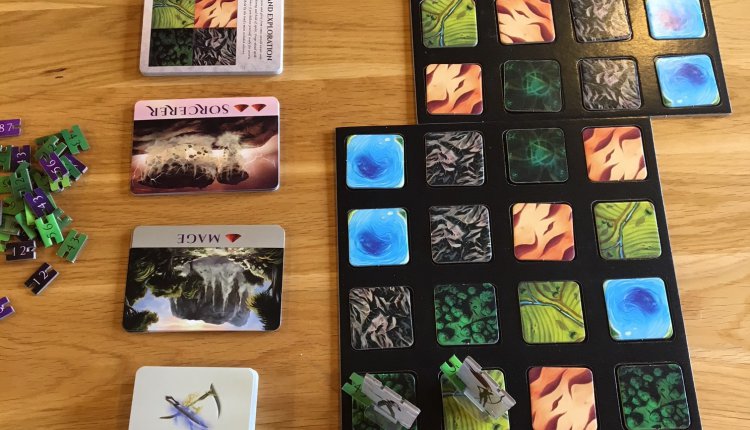 During each turn, each character may take two actions, so there is certainly a benefit to investing in placing new tribe members on the board. Among the available actions are move one space (which is the only repeatable action), attack a foe, explore a tile, cast a spell or harvest/mine a resource. The alternative to adding new members to the tribe is to upgrade existing members to their more powerful version (for example, the Peasant becomes the Cultivator) which makes their actions more efficient, so let me explain why.

If an archer shoots at a foe or an enemy player, then they must roll a D4 and will score 1-3 hits based on their roll, with 4 being an automatic miss. Similarly, whilst any character may harvest a  single corn, oak, nickel or spice based on which tile they are standing on, only the peasant can roll a D4 to draw 1-3 of that resource – again, a 4 will fail. In the promoted state for the archer (called The Marksman) or by using a cultivator instead of a peasant, the possibility of failing is removed, so the maximum damage done (or resource drawn) becomes 4. Promoted units also gain additional life and in the case of the mage (when he becomes a sorcerer) more spirit.

Each turn is really defined by what characters are on the board. Peasants and cultivators gather resources (to enable hiring of new tribesfolk and the upgrade of those existing) whilst explorers flip tiles and draw exploration cards, which may activate traps or monsters, as well as reveal treasure or similar. Soldiers and archers usually take fight actions or make aggressive progress towards enemies or other players, whilst mages will usually aim to cast unique spells in order to gain Prosperity Points, whilst sometimes also damaging foes. 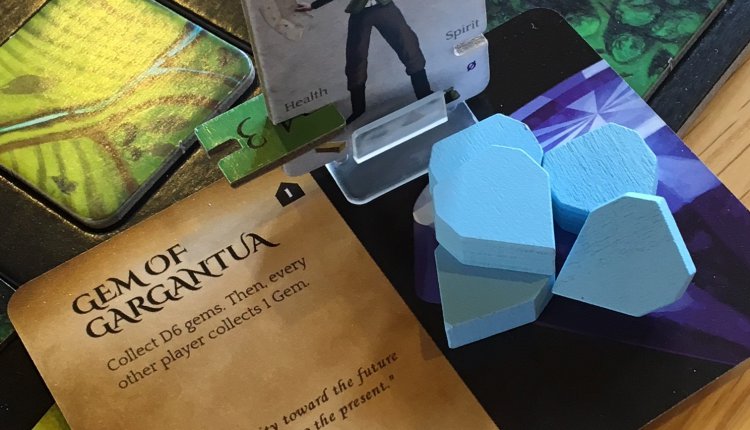 Stratos offers a high level of variability, which is undoubtedly its saving grace. Whilst the expansion I am reviewing has just two boards, if you combine it with the base game you’ll have six plus a huge variation of different terrain tiles that, when combined, will offer limitless potential for variable worlds. It’s also possible (and encouraged) to vary the way that boards are lined up, which can create choke points and similar areas of strategic interest.

The actual game play is very quick once you understand it. Each tribe has a limit of five characters, which means at most each other player will have to sit through ten actions per other player, but that’s very, very unlikely to happen in reality. In truth, each turn takes probably just a few seconds or maybe a minute at most. Administrating the pieces (adding and changing the chits that connect with each piece, for example) and reviewing explored cards will take the most time, but even so, it’s not drastic. A plus side here is that most outcomes are either fixed (draw exactly 1 resource) or randomised simply, with a single die roll that has very occasional modifiers for being in a defense stance (which reduces damage by 1, or because of an item.)

The downside of the simple way that Stratos plays is that it is highly random. Whether rolling dice for upgrades or attacks, or drawing cards that can vary between a wonderful treasure or an awful trap, randomisation is a slight problem. I actually find this quite bearable based on the Light in the Darkness expansion because the board is smaller (and the game shorter) and because enemy pieces introduce a joint focus that helps to prevent the total dominance of one player.

Regardless, I found the sheer range of options (given the small game size) and the number of possible outcomes quite interesting. You’ll never get through any deck of spells or items in a game, nor are you likely to see all of the enemies. Meanwhile, you’ll be planning how best to advance your own tribe and hunt down those valuable Prosperity Points. On that note, it would also be nice to have a more clear objective or something to drive more impetus, but with the score bar quite low, it’s not a major problem to create your own scenarios based on the custom map that you intend to use. 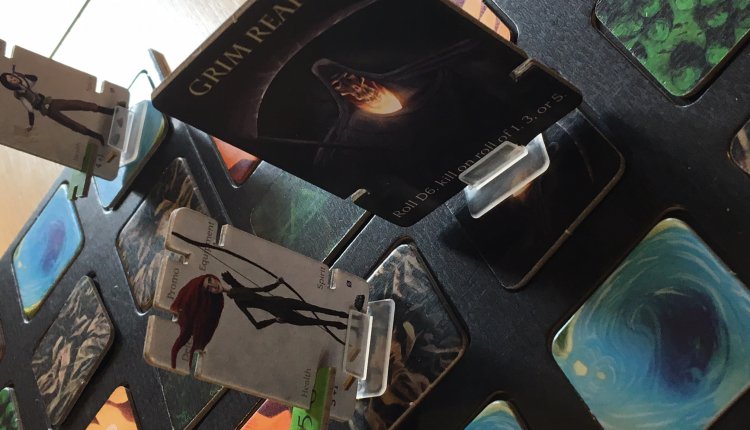 In particular because I have reviewed the (seemingly, as I have no frame of reference) Light in the Darkness box which appears to have more features than the base game, all packed on to a smaller board, I quite enjoyed the experience. I would absolutely love to try the full game and the expansion with all six boards and both sets of cards combined, although there is a chance then that at less than the maximum 7 players, the characters might end up milling around doing their own thing.

I also love that players can expand and upgrade their tribes folk in Stratos and I am a big fan of the exploration mechanic, so in the same way as all characters can draw resources from the tile they are on, I wish all characters could explore (perhaps at a disadvantage in comparison to the explorer) but that’s wishful thinking. Combat is fun and worthwhile, but I should note that it is one of the most variable elements in the game – a character can survive multiple attacks or be killed in an instant, either of which will be frustrating for one player or another.

Despite the minor criticism that I’ve levelled at it, I enjoyed my time with Stratos: Light in the Darkness and I think I would enjoy it in combination with the base game just as much. The base game itself appears to lack monsters and a few other features that this expandalone adds, so I would recommend that if you are interested, you buy the pair together. Stratos is an interesting and unique addition to any library, with many good and innovative ideas.

You can find out more information about Stratos (and Stratos: Light in the Darkness) on the website of publisher Board and Tale.