In addition to getting the opportunity to review Stellaris’ new DLC: Apocalypse, I’ve got to experience the highly-anticipated Cherryh 2.0 update, which it happened to launch alongside. Although for the past few months, I have been buried under gaming reviews,  prior to last June I had an embarrassingly large number of hours invested in Stellaris. Having not returned for a while and tempted by some of the massive changes in Cherryh, it forced me into quite a bit of relearning while simultaneously unlearning Stellaris playstyles from my past.

The most interesting, as well as controversial difference, is the new travel system of Apocalypse — as hyperlanes are now standard and predominant, leaving both warp and wormhole technologies enormously lessened and changed. As Stellaris is a monster of a game, this is only a partial review — hopefully, the Big Boss will let me continue to regale you with stories of my destruction and idiocy — err… I mean victories(?).

Admittedly, I hadn’t really played since I started writing here. ‘Curse the deadlines!’ and ‘Blast the backlog!’ were common comments of mine. In essence, I hadn’t played much since a bit of Synthetic Dawn after its release. Stellaris kept updating, I kept up with the dev logs and the discussions — but I just couldn’t make it back to the game. Right around the time of 1.9/1.91… ‘All right! Now would be the time to go back’ — except for one thing: I was already reading about Cherryh, 2.0. and the Apocalypse news. Crap. I could maybe sneak half a game or so in — or just grin, barely bear it and wait for the huge, new and improved game, coming with the possibility of complete planet destruction. So I waited. Until now.

For my first foray into galactic domination, and since I had very little experience playing as machines, I chose the ‘Earth Custodianship’. I play a lot of random races but didn’t know if I’d roll up something pertinent to Apocalypse. Hell, I didn’t know if these guys/machines were — but I gave them a shot, being the first one and all. I may even stick with them to get to know them better. For the options, I went all with defaults except that I a) turned up the galaxy to large and b) turned on Ironman mode. As a civilization, we were a Machine Intelligence while being Rogue Servitors, meaning we prefer Continental (Earth) planets and are Efficient Processors and Emotion Emulators, but our downside is that we’re Bulky. Our other civic was Delegated Functions and, because we’re machines, we have a Gestalt Consciousness.

We were just building and surveying along when — excessively early — we met our first neighbors: the Kingdom of Yondarium. They’re a bunch of bird-headed, Authoritarian, Fanatic Spiritualist, Slaving Despots that prey on the feeble and fragile — all in order to keep increasing their slave population. They use their military power to exploit anyone they deem pathetic enough to overrun. *Makes dry-spitting sounds: ptoo, ptoo*

(Honestly though, if I rolled them up as a random race, I could really have some fun playing as them). Luckily, especially this early in the game, they didn’t hate us… at only -25. In time, we’d hopefully either absorb or at least ally with them in order to proceed with our stellar dominance. That’d be stellar. *Cricket sounds*

After a bit more exploration, we ran into a complication — as well as a rough decision to make.

You see, we found the above planet: Nicor. It’s a level twenty-five alpine world. We machine salivated. *Tink, tink… from the little, extra metal pieces from our mouths hitting… well, nevermind* We really wanted to colonize this world. Our problems were three-fold. First, we didn’t have direct access to it via our own hyperlanes. Second, we were already using Yondarium space to fly our survey ships through. At -25, it’s not like we were their favorite machines in the galaxy anyway. A slip or mishap, anything to anger them, would cut us off from an L25 world. Finally, since we’d already tried to go south of Nicor, we already knew that an enemy, 906 strong, was sitting in Eurav Wass, right next door. Our fleet was still only 342-strong.

In case you didn’t notice before, we were ‘lucky’ enough to live on a dead end street. Sure, there were a few planets we could colonize north and west. Unfortunately though, we were almost as west as we were going to get. Already. The route west was a dead-end, as well!

Thinking long-term (probably too early), we were going to have to go east at some point. Regrettably, there was only the one lane east for us — controlled by the bird-faced slavers.

The most logical and sensible way to go was to keep developing west as much as possible, then deal with the Avianboys later. We were machines, after all. Any other choice would be stupid and illogical. It’s too bad our leader was a gambler and really wanted Nicor. We sent a construction ship, then a colony ship to Nicor as fast as we could build the latter. Is our leader brilliant or a gambling idiot?

What happened next?! How did it all work out? Will Leonard and Penny’s marriage survive the— wait, that’s something else. I warned you in the beginning that this was only a partial review. It’s not even an AAR — it’s more of a DAR — a During Action Report.

Also noteworthy: early in this review, I opted into the ‘2.0.2_beta’. If/when another beta releases, I will choose that as well.

Obviously, I love Stellaris: Apocalypse. With everything I described before, I feel like a novice in a lot of ways now. Out of the millions of hours (not quite) I played before, I recall only playing a couple — like, literally two — games using hyperlanes. I’m a huge 4X space guy (well, robot now). Since a ton of other games already do the lane thang (that’s the Texas in me), I always played Stellaris with one or the other of the choices. I’m adjusting and getting used to it just like everyone else. Obviously, it’s going to take me a while to work up to the Titan-building, planet-killing, Ion Cannon-countering fun that’s just waiting for me with the Apocalypse addition. I’m looking forward to running into Marauders — so I can dry-spit metal scraps at them as well.

For now, I will simply return to another, different game I recently started. I decided to keep playing as the ‘Earth Custodianship’, with the same settings, except for ratcheting up the lane density a bit. The welcoming wasn’t nearly as ‘pleasant’ as the Birdpeople’s sniffly, whininess. The Inari Reavers were both a lot larger than us and immensely more hostile (at -1035… upon meeting! What the hell did we ever do to you? Are you some kind of Fanatical Purifiers or something? Oh… umm… yeah, guess so.) 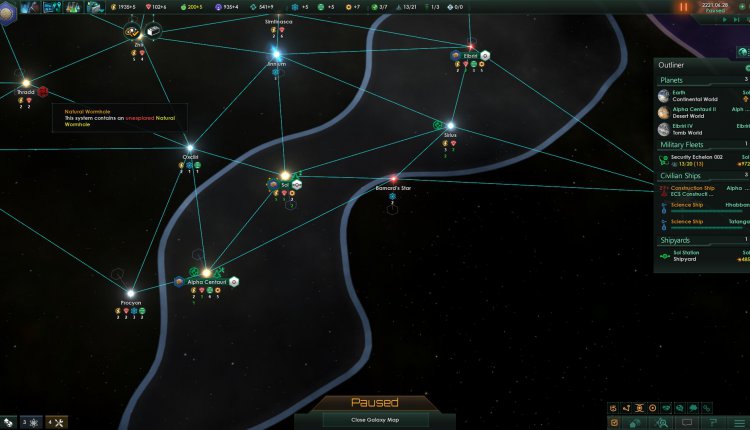 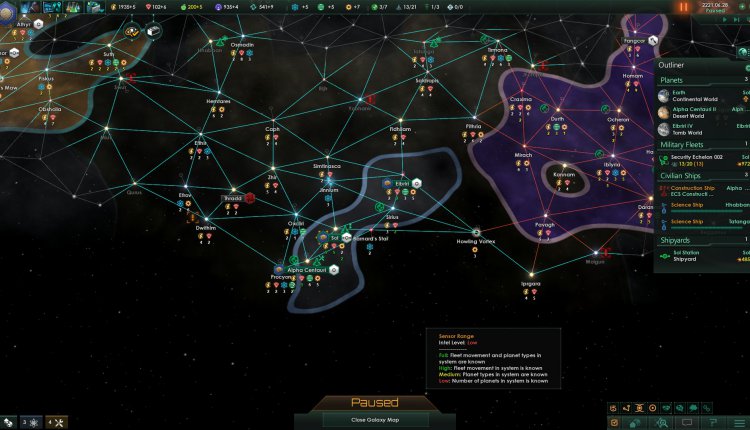 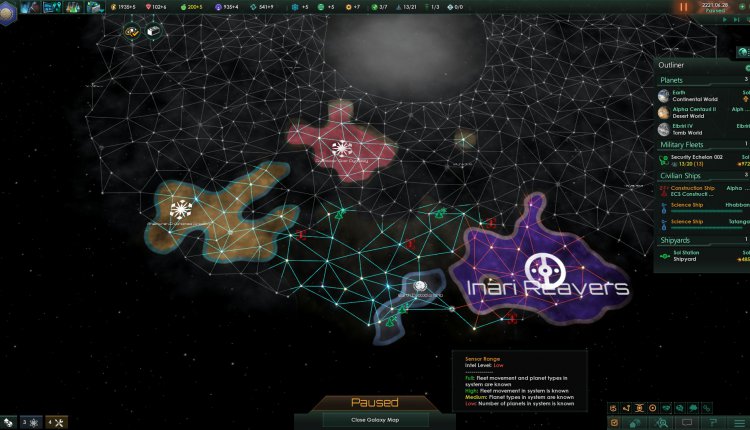 We look comparatively small for some reason.