Ah yes, the art of making a quality two-player board game is a tough one to master. Perhaps the most commonly played and toughest player count to get right, almost any game needs to cater for duo gamers. Whether the focus is on friends and family or serious competition, there has to be variety, equality and tension, or else a game just won’t work in this setting. Thankfully, Splendor Duel has all of these things, and it may just have crept straight into my top five two-player games.

Splendor Duel is a smaller (very small in fact) and more focussed variant of the classic and much loved Marc Andre original — created with design support from the legendary Bruno Cathala. Much as in the original, the players are vying to claim gem tokens (represented by lovely plastic chips) which they will use to fulfil contracts — allowing them to earn crowns, gain influence in different markets and of course, earn points. 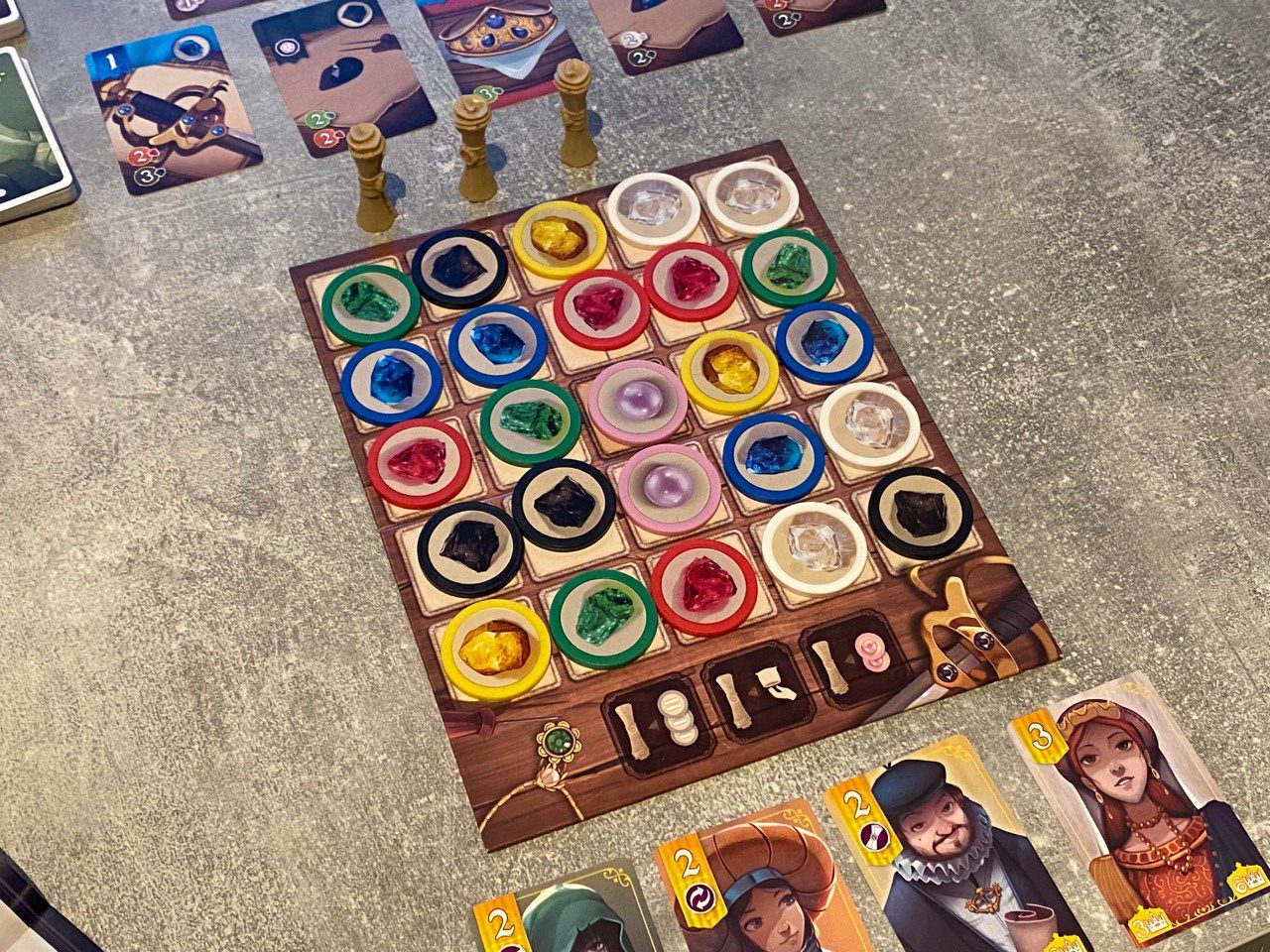 A game of Splendor Duel can end in one of three ways — when either player has twenty points on all cards at the end of their turn, whenever they have ten points on cards associated with a single colour of gem (more on that later) or when a player has ten or more crowns on all their cards. These aims are somewhat compatible, and one of many great things about Splendor Duel is how plans can change as the game goes on because the players need to keep a close eye on their opponent and try to figure out what they might be doing.

The rulebook describes each turn as having a couple of optional actions and then three mandatory ones — the optional ones are conditional and involve using a privilege scroll (if you have one) or replenishing the board (if you wish or need to) depending on the current game state. The mandatory actions are simply to take up to three gems from the board, take one gold from the board (and reserve a card for your own use later), or to spend your gems (or gold, which is wild) to fulfil jewel cards — whether from the general supply or your own personal reserve. 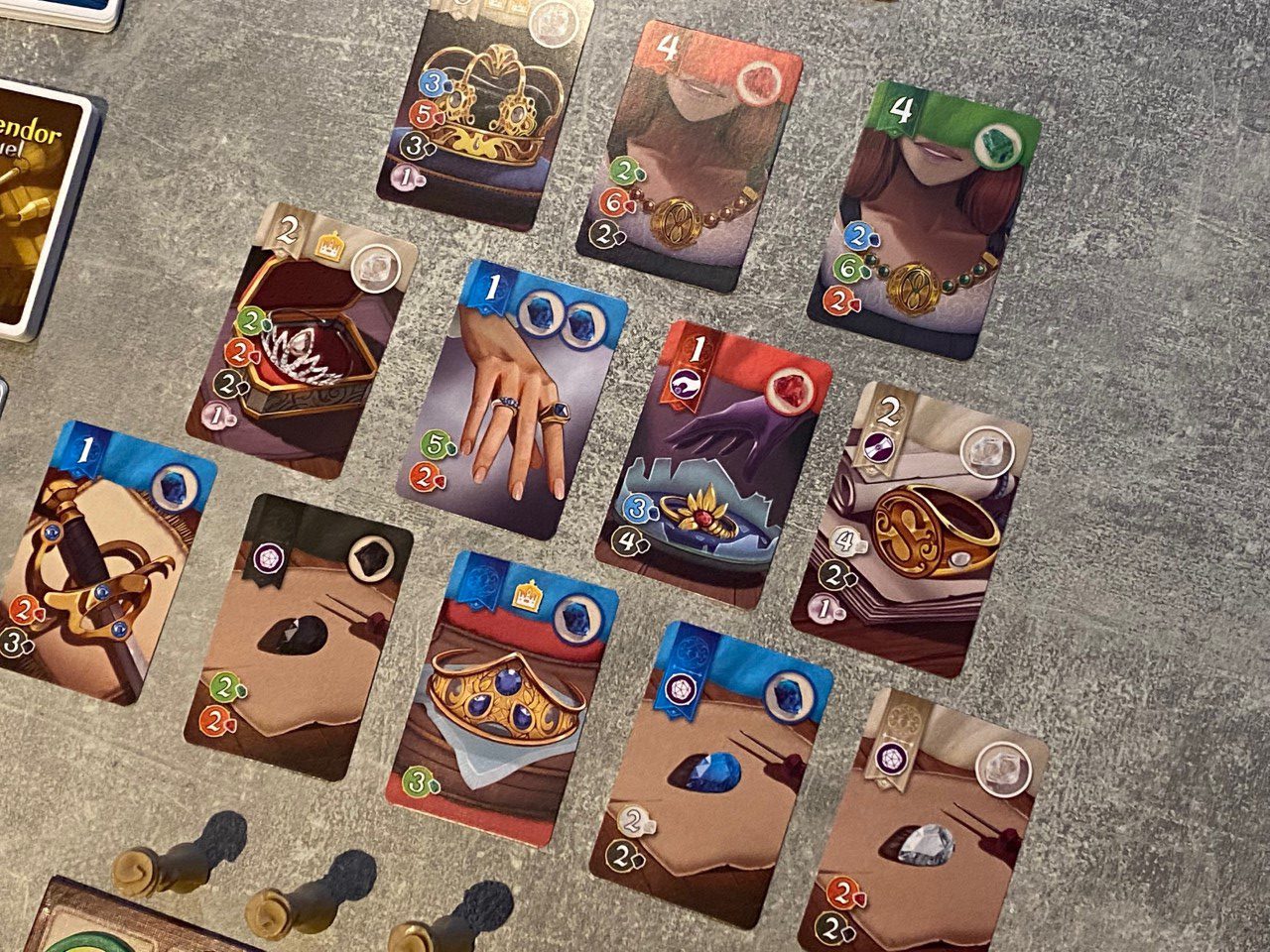 That’s all fairly simple, to be honest, but there are some smaller and more fiddly rules in Splendor Duel that all make perfect sense, but do need to be considered. For example, if you take two pearls (which are fairly rare) or three gems of the same colour from the board, or when you replenish the board, your opponent will gain a favour token. There are a few other small examples, and the game uses reminders to help the players, but these things cumulatively raise Splendor Duel slightly beyond pure gateway gaming – which for me is a good thing.

Having mentioned what players will do on their turns and talked about replenishing the board, this is what brings me on to what I really like about Splendor Duel – which is how it creates a super tight, focused and competitive game space at all times. The board is small and set up from the centre in a sort of “snake” formation that expands outwards from the centre. During the initial set-up, every token in the game is used and every space is filled. 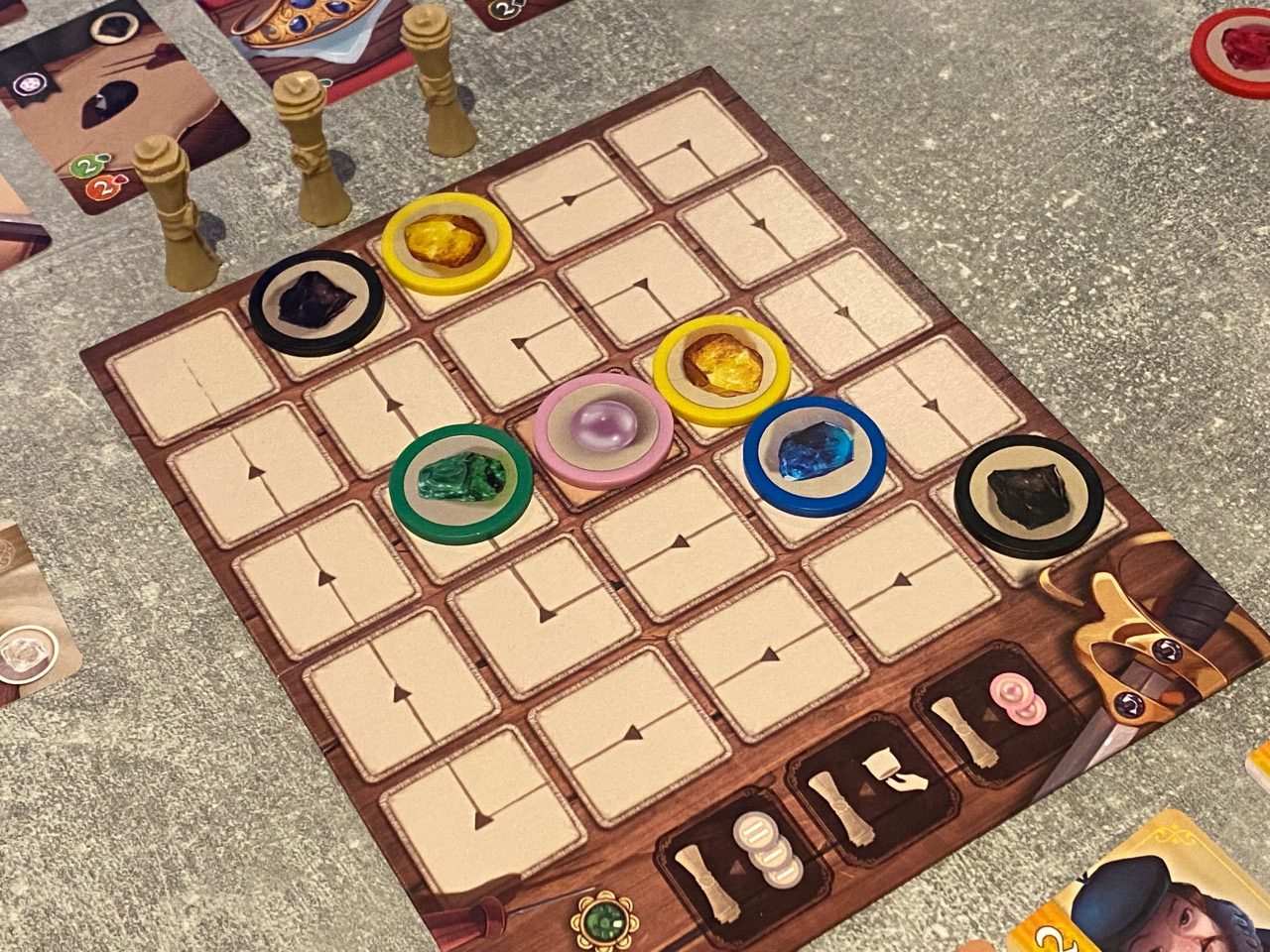 Just above the board, a pyramid of jewel cards is built, with five level one, four level two and three level three cards placed in rows above each other. The players then begin to take turns, and the second player starts the game with a favour, which basically allows them to take any token (except gold) before one of their normal turns. Because the players can both see all jewel cards (which are essentially contracts to be fulfilled by jewels) from the outset, they can plan immediately.

Do we both see a jewel card that costs two black and two red, and we can see a row of three gems that includes a black and two red gems? Should I take the gems and risk that my opponent will take a gold and then reserve that card (effectively blocking it) or should I reserve the card with gold and hope they don’t pick that row of three gems? What other jewel cards are there? Are there several which require similar coloured gems and can I access at least two or three of those gems with a single turn? 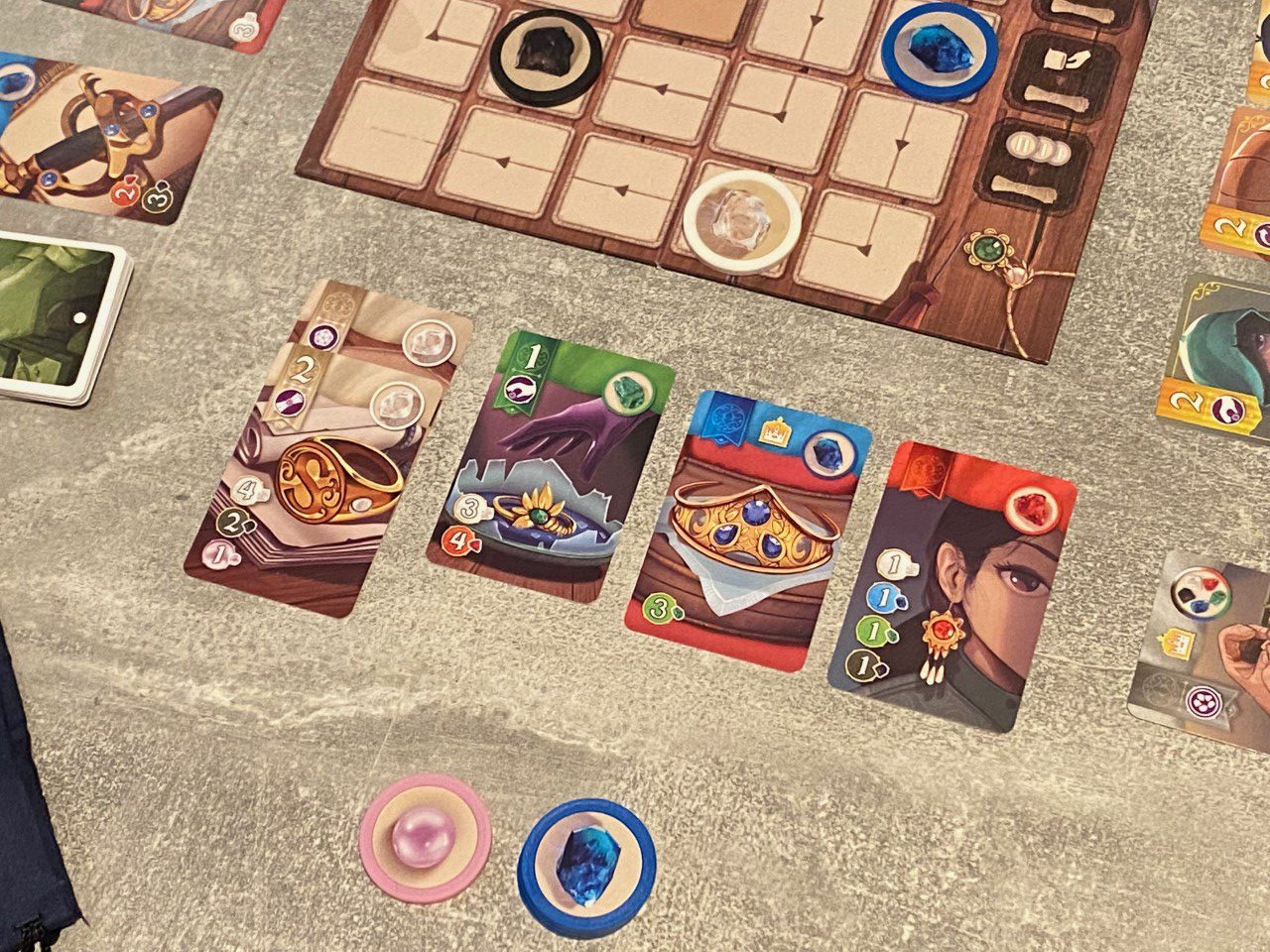 When jewel cards are fulfilled, things get even more interesting because most come with benefits. Some are simply high value in terms of points, but most offer a gem of a single colour in the top right corner – this gem then counts towards future purchases. So if I had a jewel card with a red jewel on it and I wanted the two red, two black jewel card I mentioned earlier, then I would only need to pay one red token and two black.

Some jewel cards have crowns — and when you get to three and six crowns, you can claim one of the Royal Advisors who offer an immediate bonus. Others have bonus symbols where you can pick an extra gem token, steal from an opponent or even choose the colour of gem that this colour will provide in future. Some even provide the player with an extra turn to be taken immediately — and using favours, your regular turn and one or two of these bonuses at the same time can be very powerful. 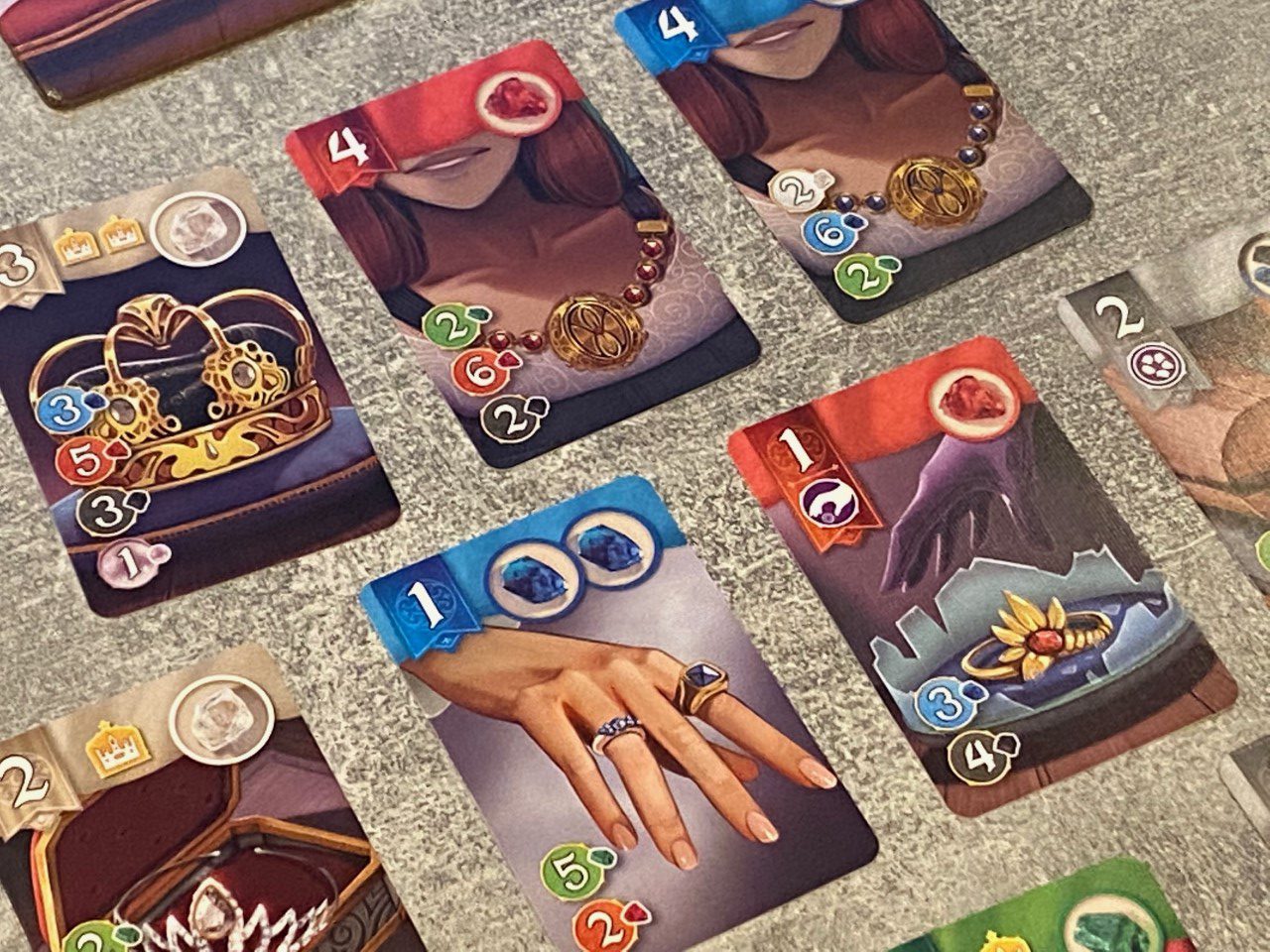 Eventually, one player will simply have to replenish the board — and when they do so, they will delve into the (included) bag and draw tokens to replenish gems from the centre of the board outwards following the same snaking pattern as during setup. Once done, they will have their normal turn to choose gems and pass to their opponent — and it’s because they get first pick that means their opponent gets a favour token. Small things like this keep Splendor Duel beautifully balanced, and its clear that a lot of thought has gone into the design.

This combination of well-thought-through and tested mechanics, some clever design in terms of board size and layout, and lots of variety and options on each turn make Splendor Duel interesting, but it’s the fact that these conditions exist in support of a really meaty and challenging game that really make it shine. Splendor Duel has to be one of my favourite head-to-head games after about ten plays so far, and each game has felt different – with different win conditions being met, different engines being built and so much going on each time. For less than twenty quid, you’d be mad not to add this to your collection, assuming two-player games are a regular feature in your gaming space.

You can purchase Splendor Duel on Amazon.