Defuse is a territory capture-style game where you are in a city, full of bombs. This city doesn’t just have one type of bomb, it has several types that cover different areas. You need to defuse these bombs to make the land usable and then build up the city to its former glory. That or you can set them off to mess up buildings placed by other players — it’s really up to you.

At the start of Defuse, you draw three mission cards and get to keep two. These missions are how you score the majority of your points at the end of the game. They are challenges like building three different sized residential buildings or building two entertainment buildings and two industrial buildings. Some, smaller goals gain a point for every entertainment building you have, for example, while others will offer a flat rate for meeting a goal. 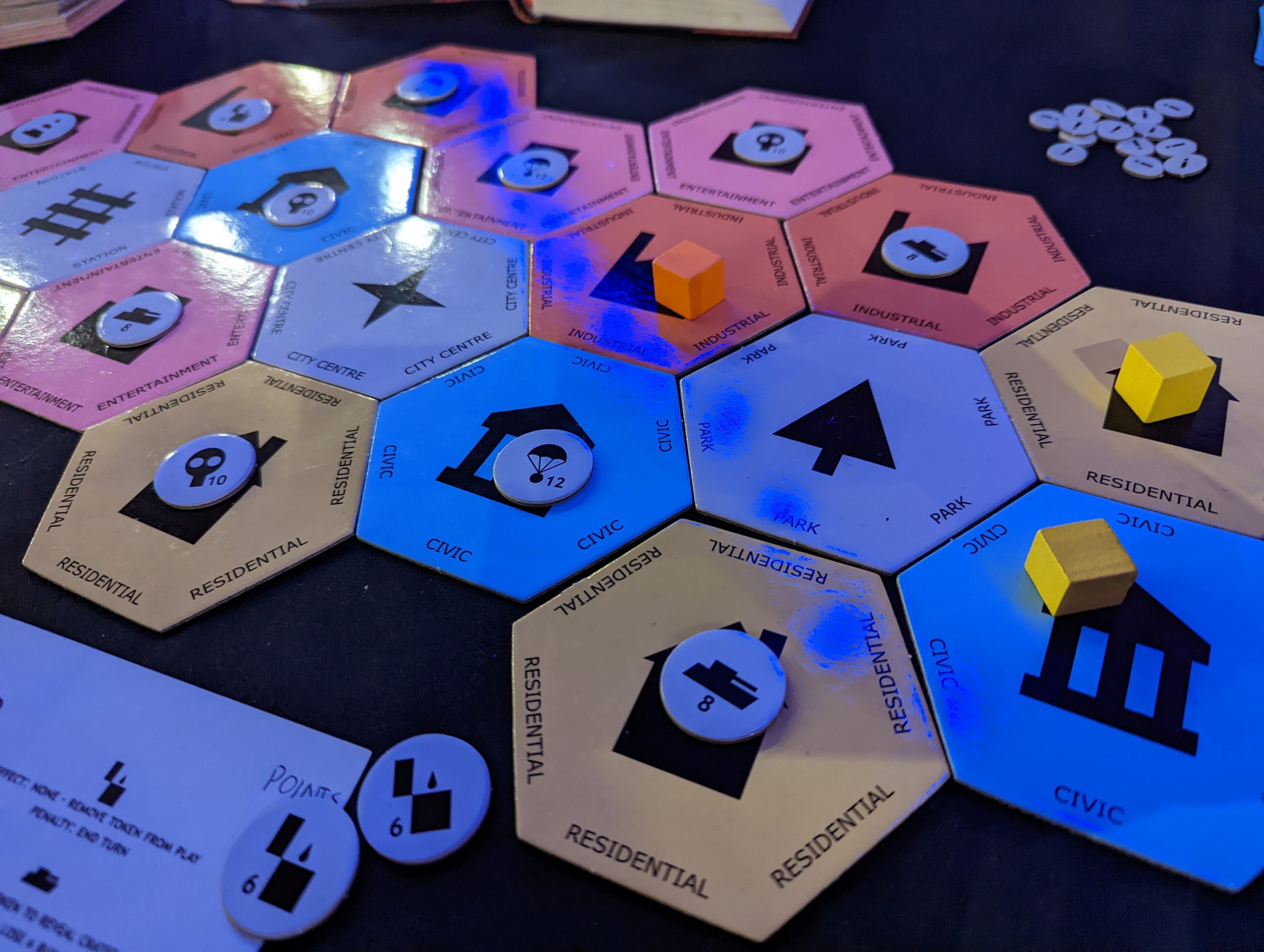 You also get a helpful, yellow card to start with. This gives you +1 to when you attempt to deactivate one of the bomb types. On your turn, you can select one card from the card bank, which can be either another mission (you can have up to three or replace one you already have) or a special card. Special cards come in three colors; yellow, pink and red. You can only have one of each color, but red cards are single use, so they tend to be used up quickly, whereas yellow and pink can help you as you build. I got my hands on a card called Laborer, which allowed me to clear poison gas or fill in craters without costing me an action, whereas Dann got a card that allowed him to double any of his yellow card’s stats. For single use, cards like immunity so that your buildings don’t get knocked down when a bomb exploded proved useful, but there’s quite a selection in there. You are able to pick from the cards that are laid out, or grab two cards from the same face down pile, then select the one you want, placing the other in the discard pile. 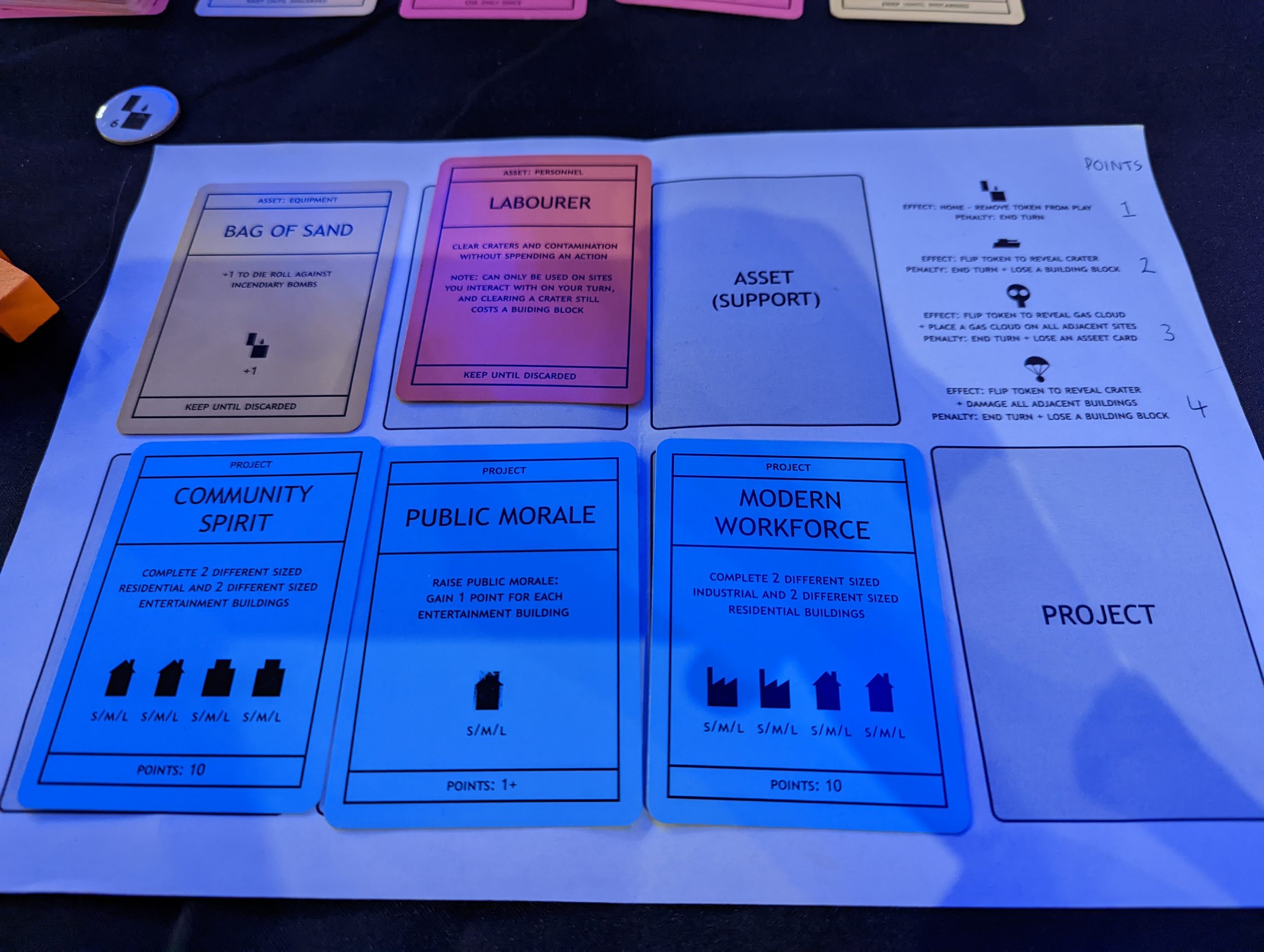 Now, we’ve talked a lot about the cards you can get, but let’s talk about the world. In Defuse you have a giant, hexagonal grid in front of you. These different tiles, for the most part, have bombs on them. The bombs are random, some are harder to defuse than others. The more challenging bombs provide more points, but if you fail, they have worse failure requirements. Exploding a bomb often affects all of the buildings on tiles around, knocking them down one block. It can also make a crater on the tile that it was on, which needs to be filled using one block before you can build there. You also cannot build on a tile that has a bomb, as that would be dangerous.

On your turn, you get two actions after your cards have been chosen. You can attempt to defuse a bomb, fill a hole, build on a tile or use your single use card if you want. You can only build on a tile that does not have another player’s buildings on it, which is where exploding bombs to remove your friends towers comes in play. Buildings can also only be built one block at a time, meaning if you need a tall tower, it can end up taking three of your actions. The game continues until one of the players runs out of blocks, triggering the end of the game. 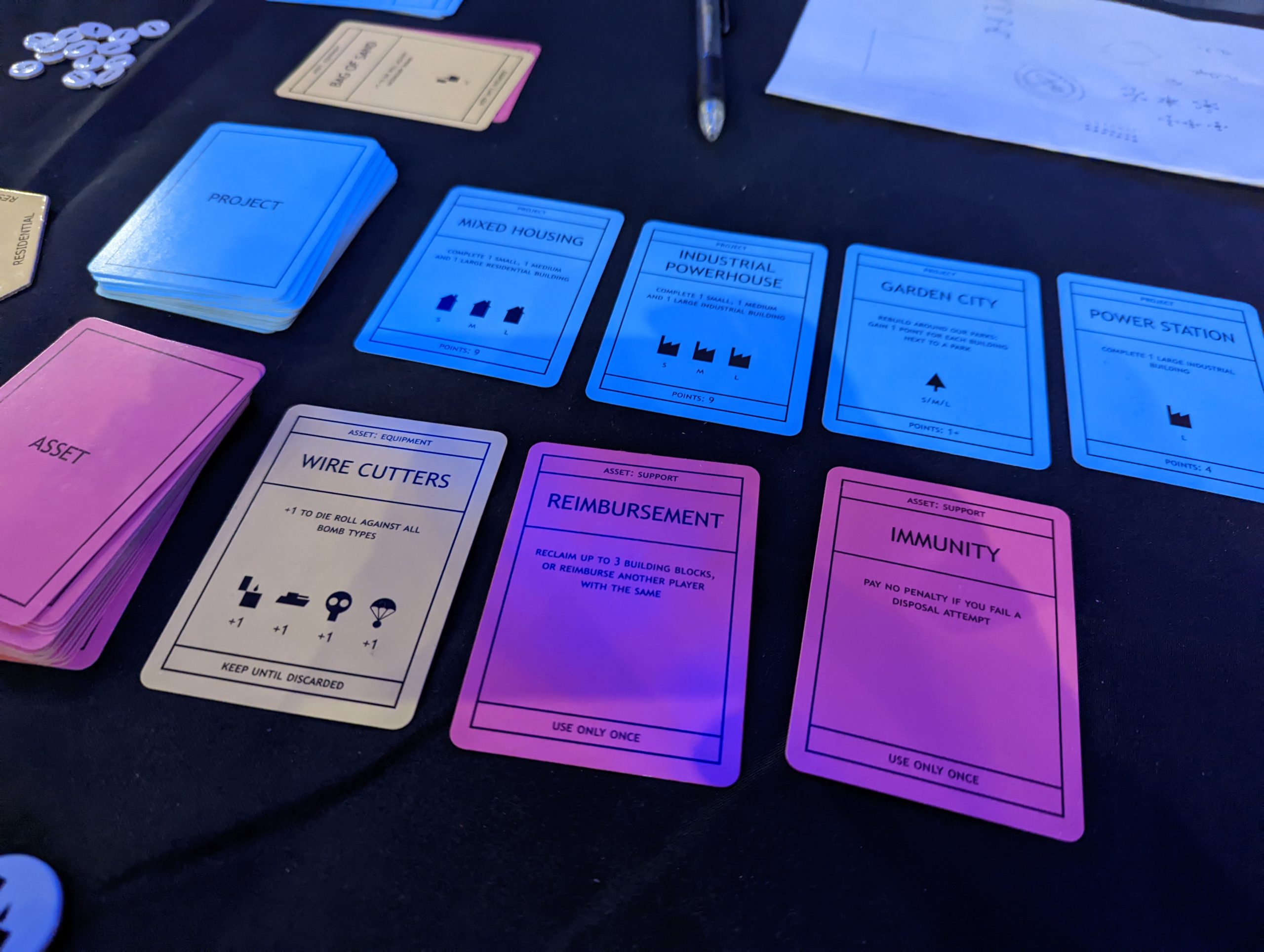 When it comes to actually defusing the bombs, the number on the bomb token shows how much you need to roll to successfully complete it. You can use whatever bonuses you have for that symbol of bomb to help you out. If your roll is successful, you get to keep the token and it is added to your score at the end of the game. If you are not, you will need to follow the guide on what happens next, which normally causes a bit of damage and ends your turn there. With that in mind, it’s best to explode bombs on your last action, so you get to use them all.

There are cards that allow you to get back blocks that you have paid to fill in holes, but otherwise it’s a race to finish them all, while sucessfully defusing bombs and trying to do your own missions. Once the game has ended, all of the points are added up to declare a winner. There is some strategy that can be done in exploding bombs, as well as alot of stuff to consider before taking your actions. 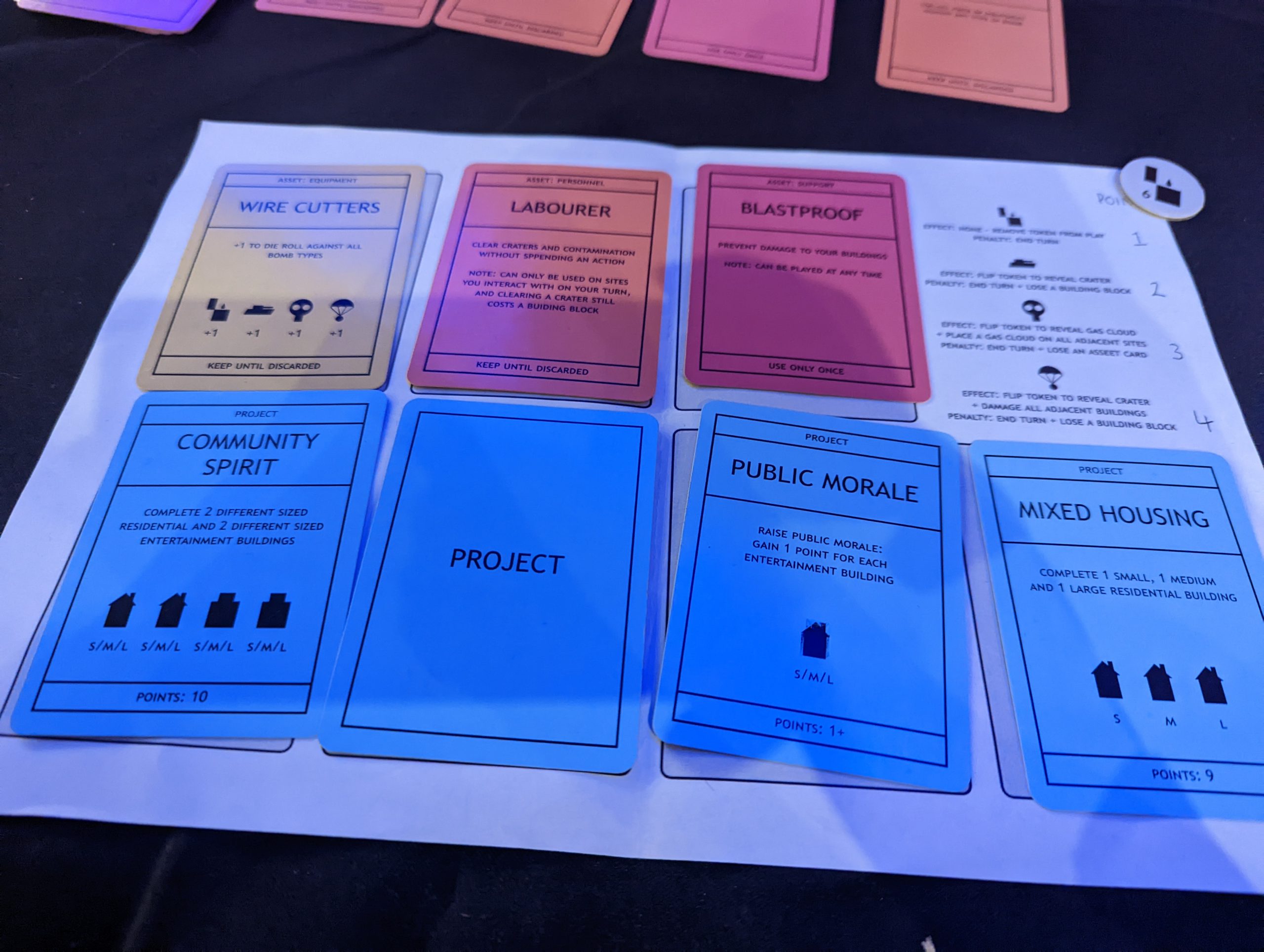 I got the chance to play a round of Defuse at Tabletop Gaming Live. I was impressed by the visuals, which feel like a building game. They are sleek, clean,but also rich  with colors to help you understand everything. The actual bomb types are interesting and the game as a whole has so much for you to think about and figure out.