Sorcerer’s Arena: Epic Alliance Core Set is a more serious Disney-themed game where you are able to duel against someone else using your team of Disney heroes or villains, all in a race to reach a set number of victory points. This game is based off of the mobile game of the same name, bringing it from your mobile device to your kitchen table.

The Epic Alliance Core Set contains a lot of classic Disney characters; Ariel, Maleficent, Mickey Mouse and Sully, just to name a few. Each of these characters have their own base and character structure, as well as their own deck, turn token, and character card. The characters are actually really unique; they all have different abilities, health, strength, and more, so creating a balanced team so that you can help each other with the ones you have is a must. 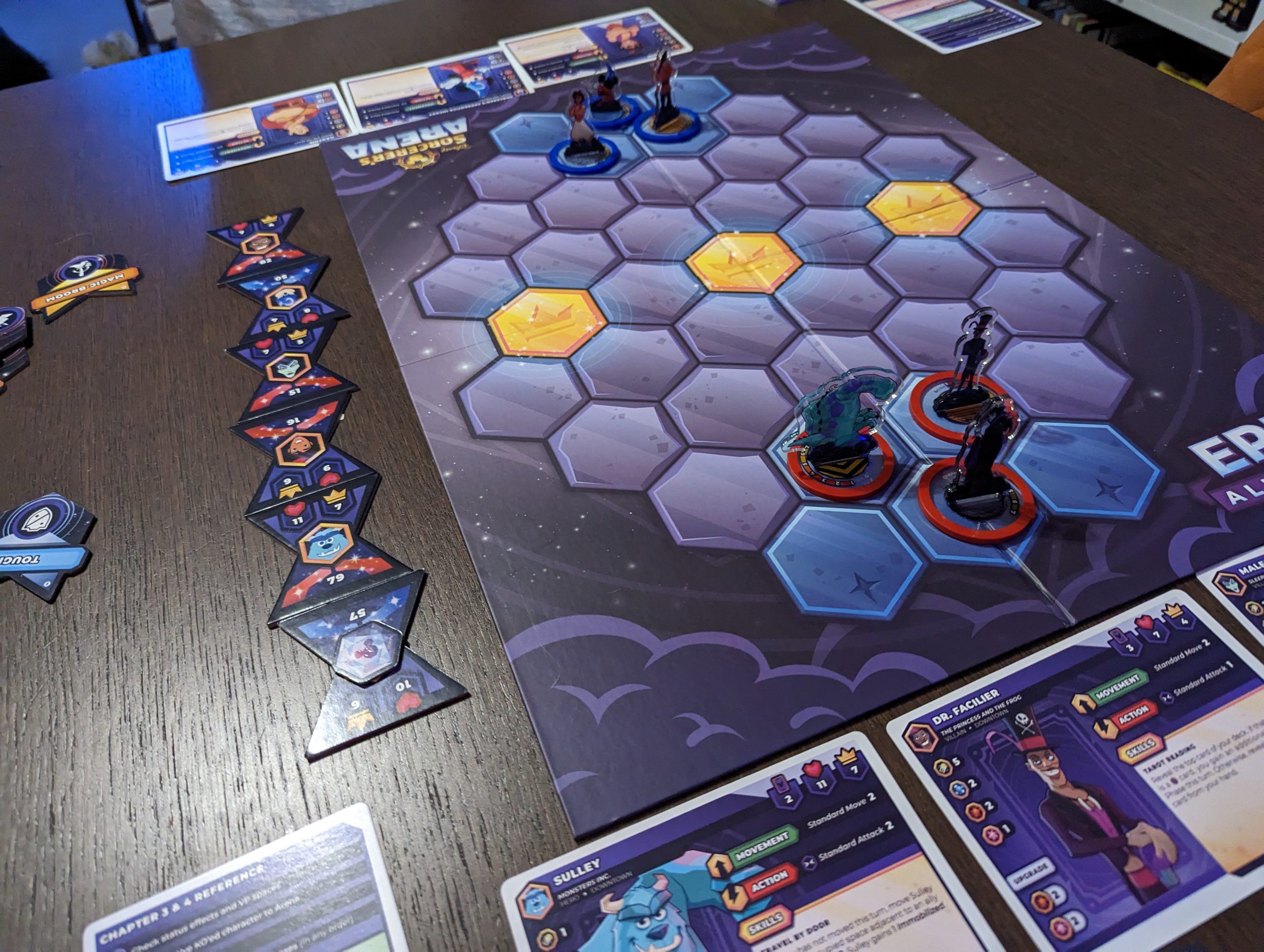 You are able to have three characters on your team, but if you are playing the more advanced version of the game, you will want to see what their decks are made out of, as you can upgrade characters using cards that you have previously played, if you have enough of the right symbols. Some characters also have skills based on the top card on your draw pile, so if you know you have more of the type of cards you need, you can balance the risks that you have when playing.

Beyond creating your team in Sorcerer’s Arena: Epic Alliance Core Set, there is an actual game there, which works as a turn-based, fighting, strategy game with a lot of thought that needs to be done in your turns. During set up, the order that you want your different characters to take their turns is decided by you, with both players revealing their first character token, which shows who goes first based on the number on the bottom of that token. These tokens, much like the character cards, showcase lots of information like their health and how many victory points your enemy will get for killing that character. 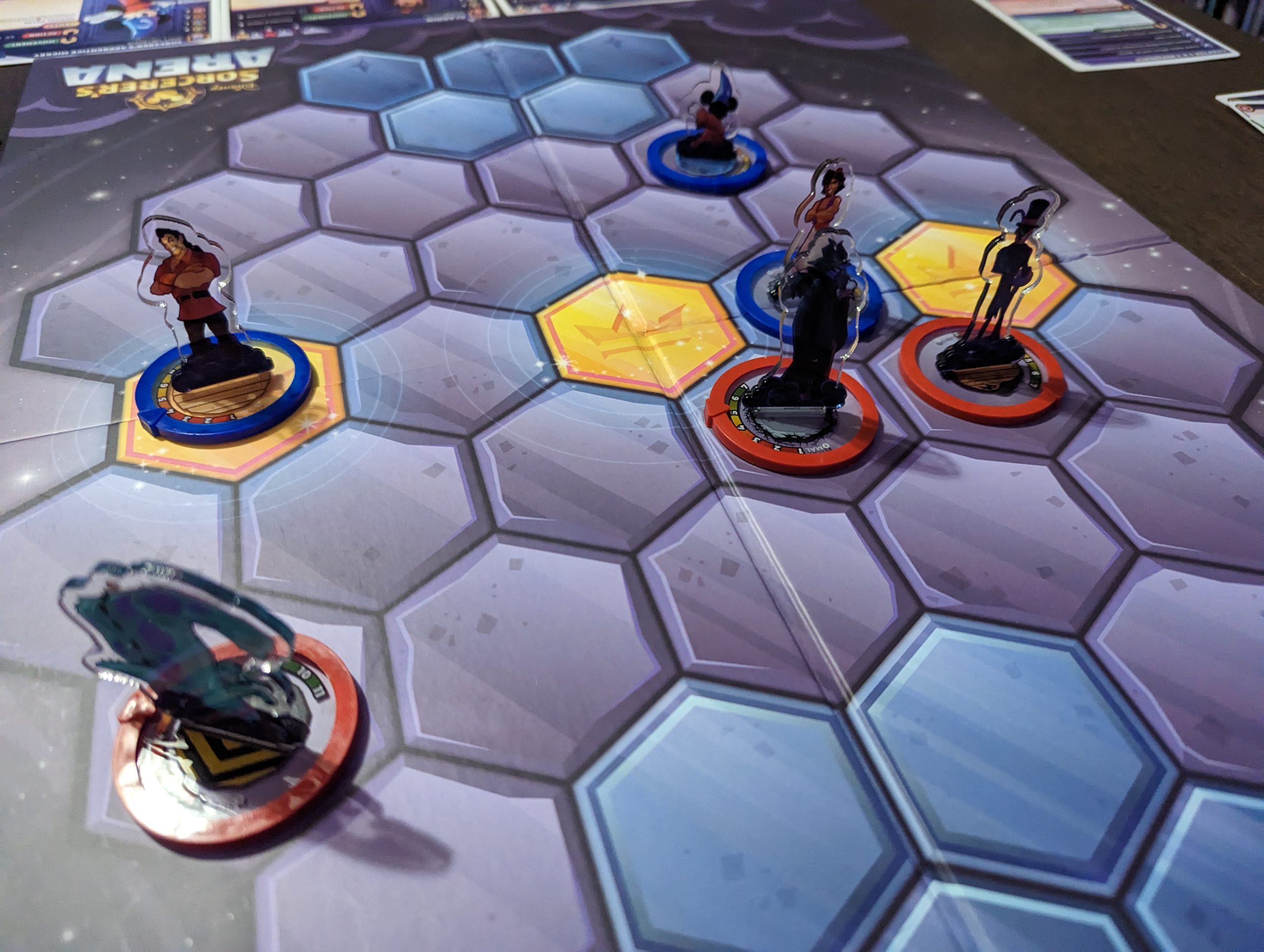 Once you have started the game, your turn allows you to do three actions in any order; your character’s skill, movement, and attack. Each character does have a base movement and attack value, but you can also play cards from your hand (as long as they are for that character) to help you move further or attack more aggressively. You can also discard a random card to add one to your base movement or base attack, which can be useful to secure a kill.

You will get victory points based on who you kill from the other team, as well as if your character starts their turn on the crown hex tiles on the map. Some characters also have skills that help them gain more victory tokens if specific events happen too, which can be useful as you try to win. A lot of the game is movement, watching your characters, and making sure you don’t die. If you do, the next time it’s that character’s turn, you don’t get to draw a card (which is always done at the start of all of your other turns) and instead can only place down your character in your base and then go onto the next player’s turn. 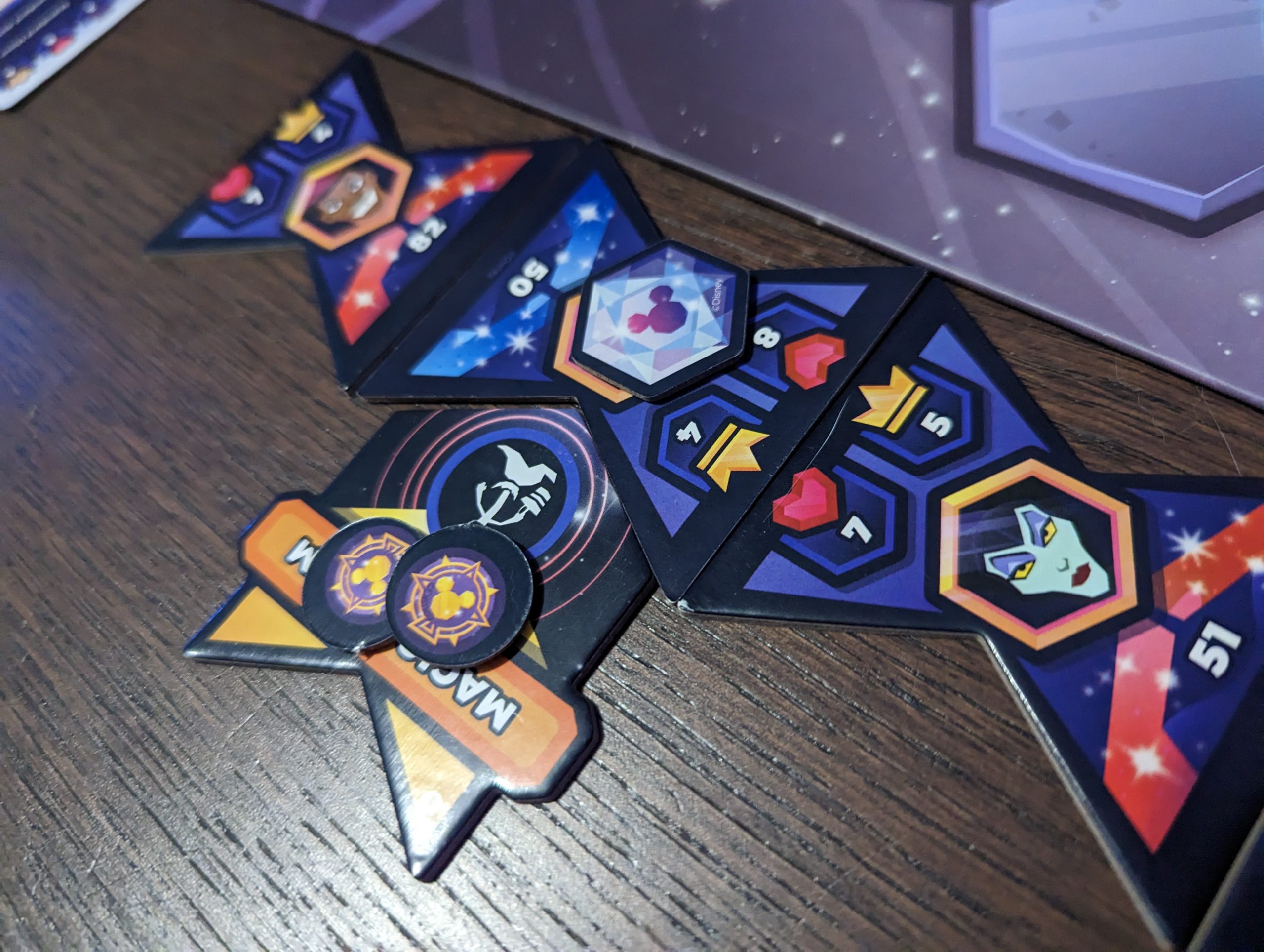 Characters can also get different boosts added to them, some negative and some positive. Ones like flustered can make you lose a card when you start your turn with that character whereas ones like toughness can make your attack on that turn worth one more. There are even specific characters in the box set which can thrive on other people having lots of these boosts, attacking them more and causing more damage to them.

Sorcerer’s Arena: Epic Alliance Core Set is one of those games that takes a lot of understanding of the different characters, as well as how they work together, to end up being the most successful. There is a lot of working together as a team and thinking about how long it will be until you use one of your characters, figuring out things like if it’s safe to leave them in that place. Characters are so vastly different that you need to lean into their playstyles; Sully is a tank with lots of health whereas Ariel is the only character that can really heal. Maleficent is great at range attacks with her magic on the other hand, and moving around the board.

The actual design of the box and the various pieces are really well crafted. The characters slot well into their stands and the stands all look perfect for the characters. A little red or blue circle counter can clip onto them to show what team they are on and their health. They do all have these stupid, thin plastic covers that you need to use tweezers to take off, but once they are off, the plastic is really clear. The box holds the various decks in their own places. It’s just all very well thought through. 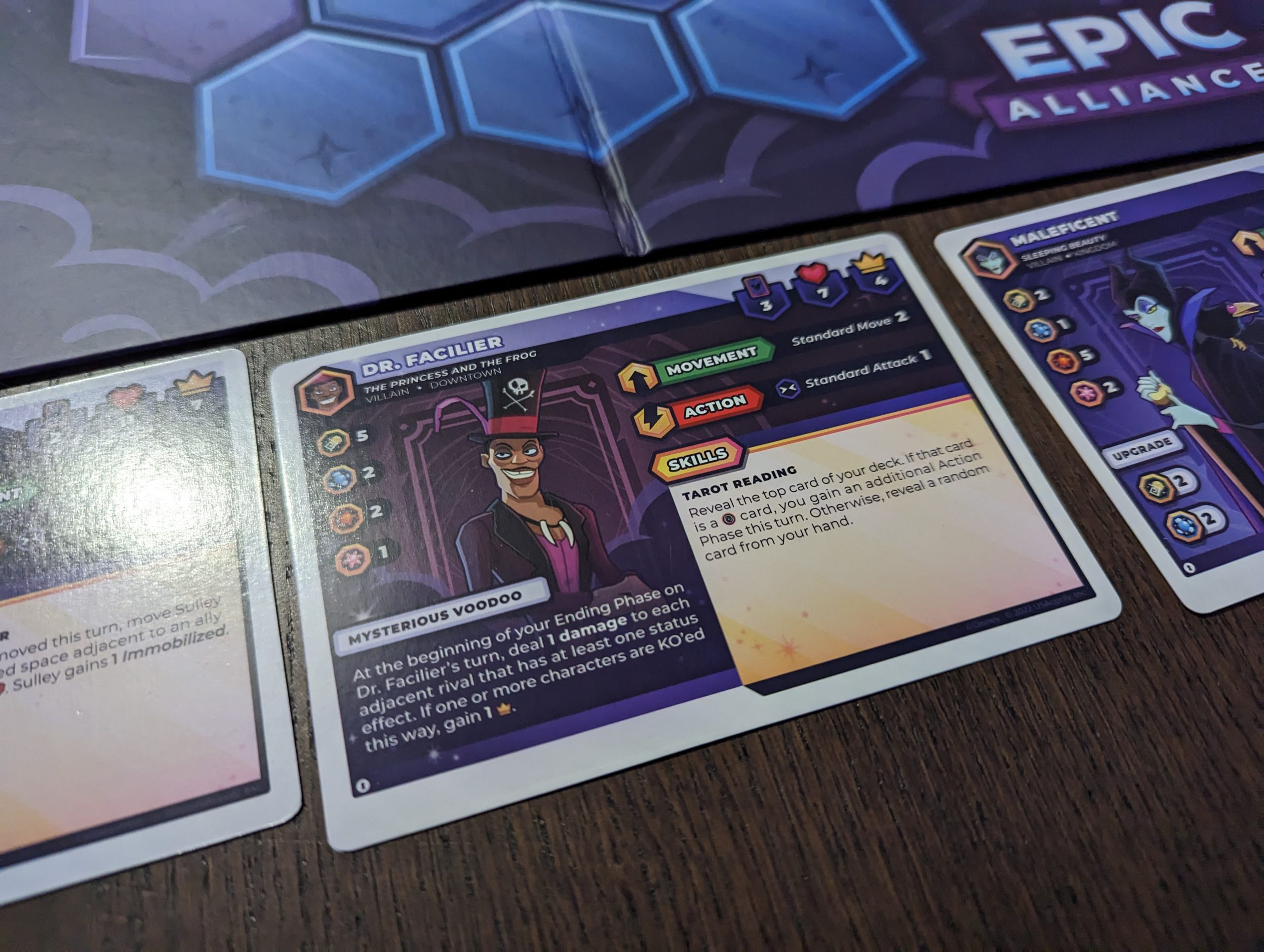 This forward thinking continues to the instruction booklet, which has you playing simple versions of the game, adding in a few mechanics each round, until you get to the highest level and are playing the full game with skills and a good understanding. This tutorialisation of the board game feels very welcome, especially to those who are new to strategy games!

With all of that said, I found Sorcerer’s Arena: Epic Alliance Core Set to be one of those games that really depends on your knowledge and ability to create the best possible team and then lean on each other. If you’re no good at creating a well adjusted team, you just won’t be able to get very far in this game. I do enjoy seeing my favorite Disney heroes and villains all together on this field though, even if they may not mesh the best together.