If you’re a fan of dark graphic novels such as Watchmen, Infinity, or even the Nightcrawler (XMEN) short series of comic books, then you’ll certainly feel like Mr. Shifty is your type of game. It resonates a heavy, dark, noir-themed style, all brought to life with fluid animations, fast gameplay, and an overwhelming feeling of badassery.

In fact, going back to the above header, Nightcrawler is really the character you can associate Mr. Shifty with to the extent of the powers. Nightcrawler is able to teleport his body about, with each teleport opening a dimensional portal that he teleports through. The teleportation leaves behind a type of smog. However, this is where the similarities end, as Nightcrawler can only teleport to places that he can either see, or has seen previously. Mr. Shifty -you see- is able to teleport through objects and walls, and into rooms he hasn’t seen before, well okay, you as the player can see the rooms layout, but if you imagine seeing through a first person perspective you can’t see what’s in the adjacent room. This ability is incredibly useful, making him perfect for what I’m about to explain. 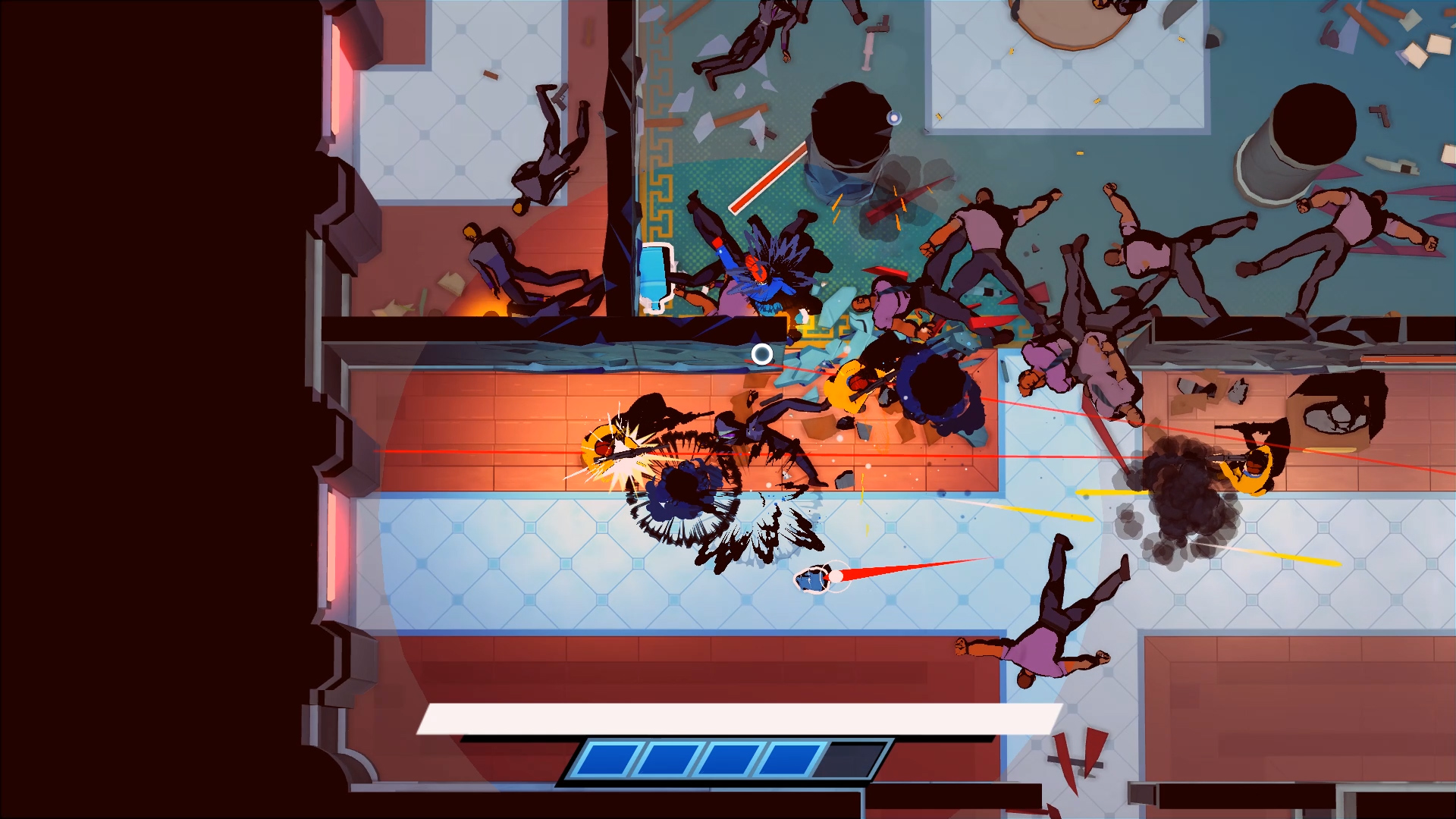 The story is centred around Mr. Shifty and his goal to break into the Olympus Tower, the worlds most secure facility. It’s not for selfish gain though. Mr. Shifty appears to be working with a type of agency, in which he is in direct communications with Nyx, a hacker helping Mr. Shifty through the building by instructing him on where to go, and hacking into doors to unlock them. The tower belongs to Chairman Stone, or as Nyx refers to him – Chairman Asshole. Chairman Stone stole a material called Mega Plutonium with the intention to weaponise it for devious purposes. The goal, get the Plutonium and escape -simple- not easy though, because plot twists send the duo further into the facility than originally intended.

While the title comes from the team behind the game, Team Shifty, who split from Halfbrick (creators of Fruit Ninja, among others) the first game than many will draw comparison to is Dennaton Games’ Hotline Miami. The top-down, retro-themeed, fast-paced, action the two share is welcome, if tense at times, and certainly Mr Shifty matches the deadly pace that was divisive in Dennaton’s series. The levels go by incredibly quickly sometimes, with some moments where you feel like a total badass, blitzing the level in one short, seamless waltz of violent punching and smoky teleportation. Other levels feel more clumsy with several deaths grabbing hold of you as you mistime a shift, or you fail to assess your environment. Levels are diverse, ranging from corridors to tight-offices, to wide open spaces that allow for massive brawls with security. 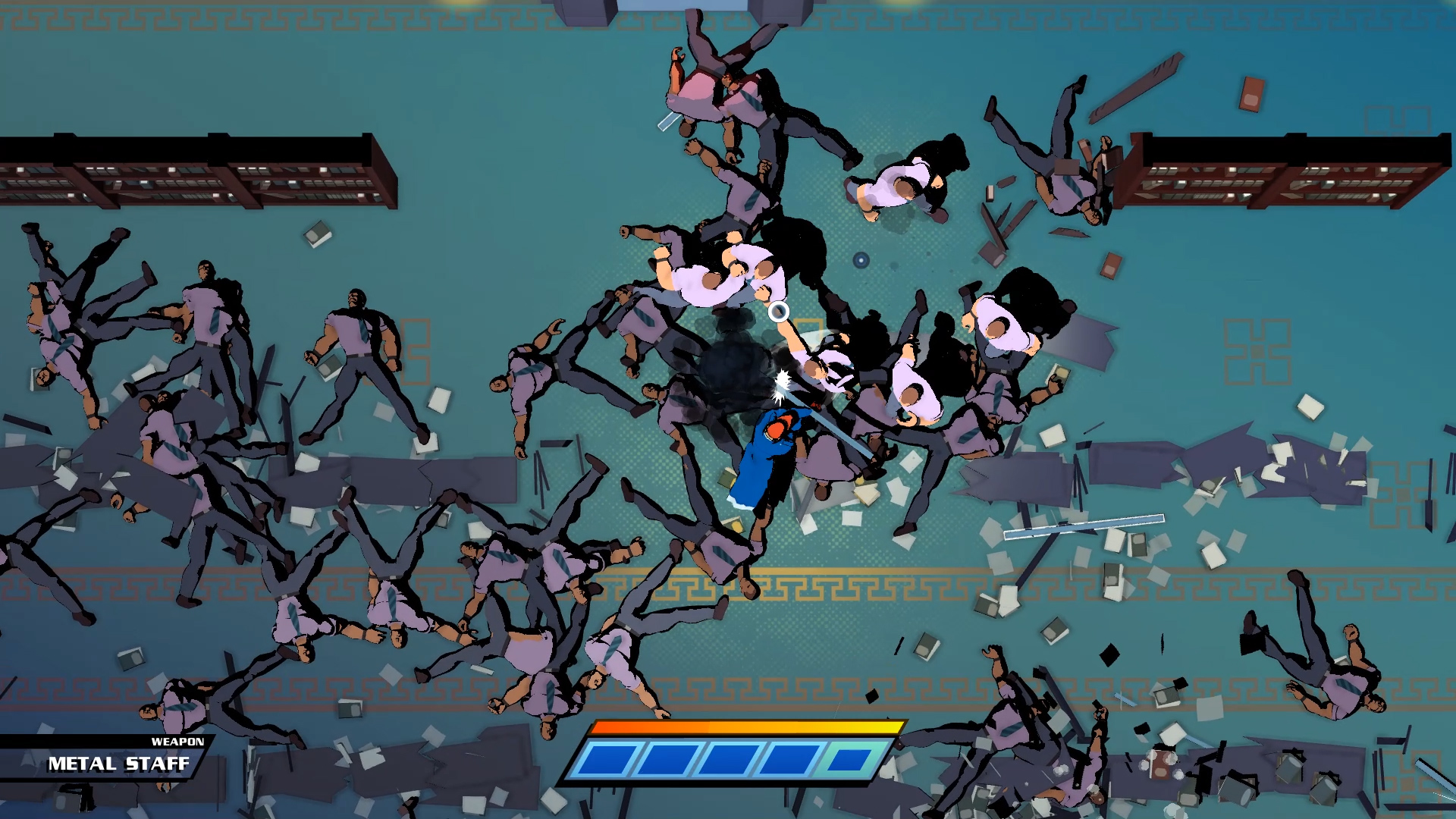 There’s a variety of items littering the levels for Mr. Shifty to throw or wield as he works his way through security; that said the character’s melee attacks are devastating, so with a little tact you rarely need to mess around with objects. The enemies -obviously- become progressively harder as the game goes on, initially only requiring two of your amped-up punches, things, understandably take a turn tor the pugilistic as the game goes on. At it’s best Mr Shifty feels like a Dishonoured mission gone wrong, with you rapidly flanking enemies, part reflex, part luck, part ‘knowing-more-than-they-do’.

The thing about Mr. Shifty’s teleportation is that it doesn’t feel like a useful gimmick, it’s a skill that is needed. You can’t just sneak past a room of guards and make it to the next elevator, you need to eliminate all enemies in the room before you can progress, and you can’t do it stealthily, so if you’re hoping for a title where you can choose to be swift and dramatic, forget it. This is all about being incredibly fast and skilled. That’s not even an exaggeration either, I’ve done a few floors in which I have cleared a room of say, fifteen enemies in less than ten seconds. I can’t remember what the hell happened, but my button mashing, and shifting skills certainly left me in a daze, just like the enemy, and I wouldn’t change a thing about that, even if it doesn’t make for interesting reading. 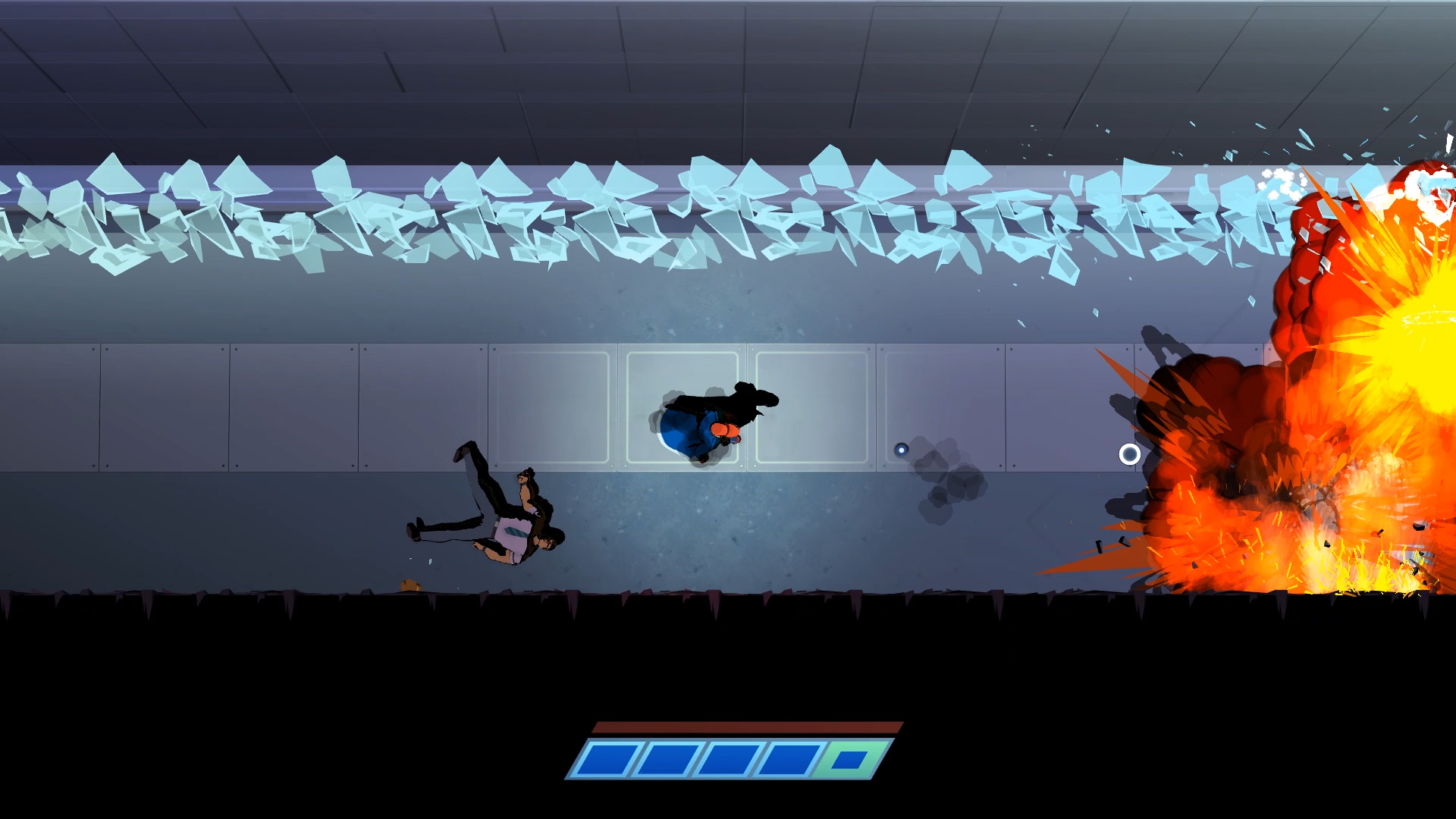 Eventually the levels get harder, filling up with more waves of enemies, or more enemies in one go. More weapons get involved, with enemies holding rocket launchers and shotguns, and there are even turrets. The Chairman mixes things up further as the game goes on, but we can’t touch on that due to spoilers. But, it mixes thing up a lot -it becomes a bit confusing, and makes your life more difficult, and you hate it. A lot. Levels later get puzzle elements, with your agility and timing tested on laser-levels, and -the obligatory- ‘weakness’ levels which strip back your teleportation power until an object is destroyed.

I just want to take a quick moment to talk exclusively about the shifting, I mean, after all, that is the main feature within the game. Shifting comes with five blocks, each block vanishes once a shift has been used, but it refills rather rapidly, so the cooldown isn’t really anything to worry about. It’s just how fluid the shifting feels, and despite the fact there’s a limited radius that you can shift to, it’s still incredibly handy. You can shift through a thin wall, and even a thick wall assuming you can finish the port. You can even shift through enemies which totally throws them off. You can also enter a slow motion dimension in which if you shift at the right moment, you can dodge bullets, shift out of the way, or towards an enemy and punch them a few times before returning to normal time. Shifting is incredible and really opens up different tactics and will require you to be quick at seeing opportunities. 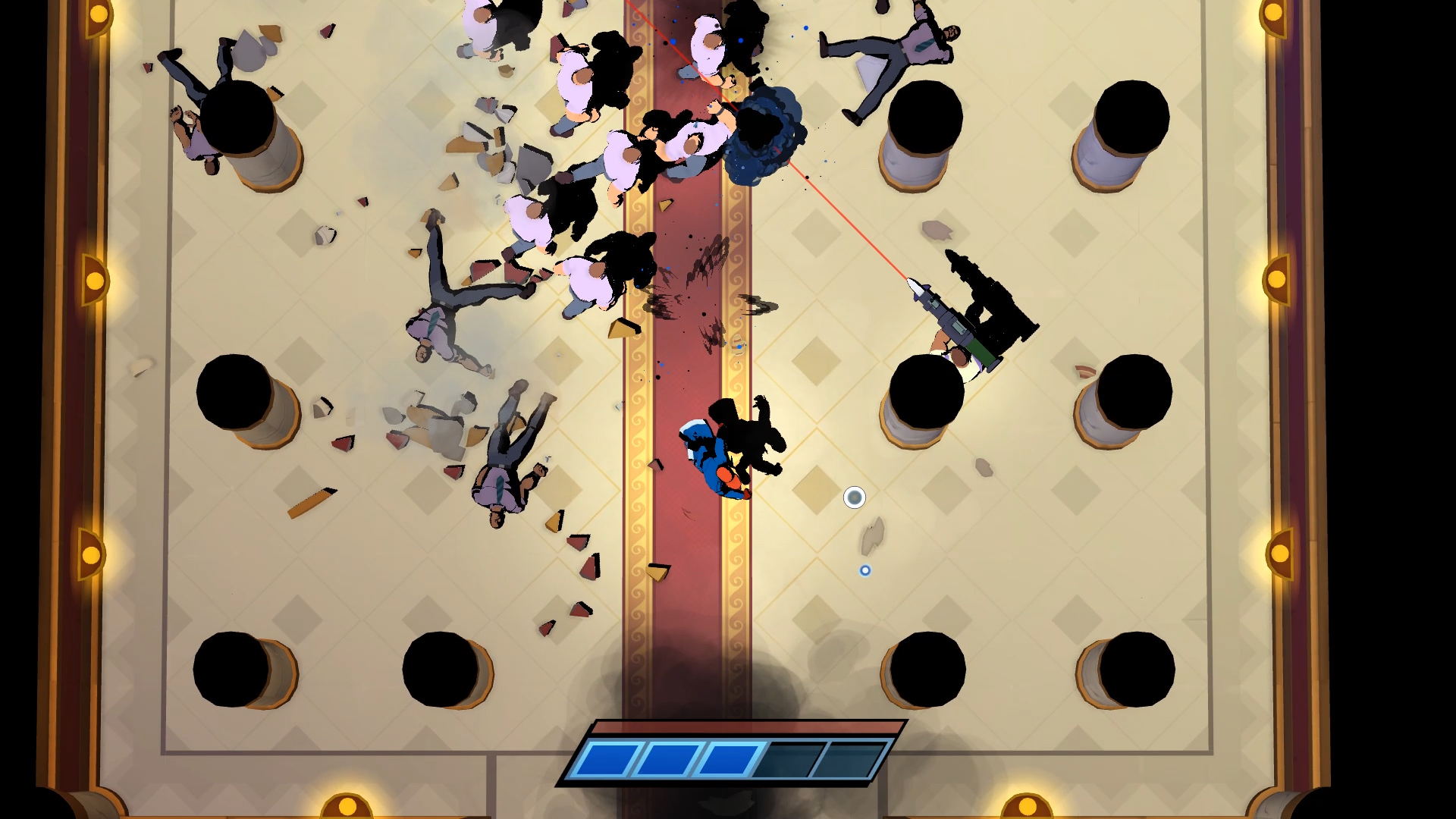 I will admit that sometimes the fast-paced feel to the game be a tad disorientating , but that’s usually only because the camera moves about when you move the cursor, so it becomes a little bit shaky. I don’t mind, it but I’m sure there’s players that would rather have the option to select a fixed camera mode, with the exception of holding Shift to look ahead as standard. 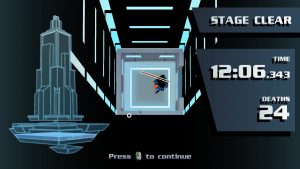 When first booted, Mr. Shifty recommends playing the title with a controller, but really, I don’t see why. The keyboard and mouse controls are wonderfully tailored to the game, with the keyboard being able to sport just running and picking up and the mouse buttons controlling shifting and punching. It feels fluid, natural, and certainly helps during the fast paced moments…which is often. Maybe I’m just good at past paced games, however, saying that, the controller does come in useful the most regarding facing the right way when shifting and attacking, with the mouse, it can get a bit flustered with you ending up focusing more and shifting around that you forget to aim, thus resulting in many frantic shifting into a corner moments. You can choose between using the keyboard and mouse, or just the keyboard at any point in the game, and choose a controller system is easy to switch too.

Graphically, as already mentioned way above, it takes on the feel of a dark, gritty comic book. A dark graphic novel if you will. The colours stand out amongst other colours in a wonderful difference in contrast, the shadows are very prominent, and the user interface is very simple, and with a comic book feel mixed in with those lower third text boxes. The puff of smoke created by a shift is wonderfully smooth but possibly fades away too quickly, I’d like to have seen the smoke linger for a little while longer…not sure why, that’s just personal choice talking there, but I would have thought it would have been cool. You do get a cell shaded feel to the title. 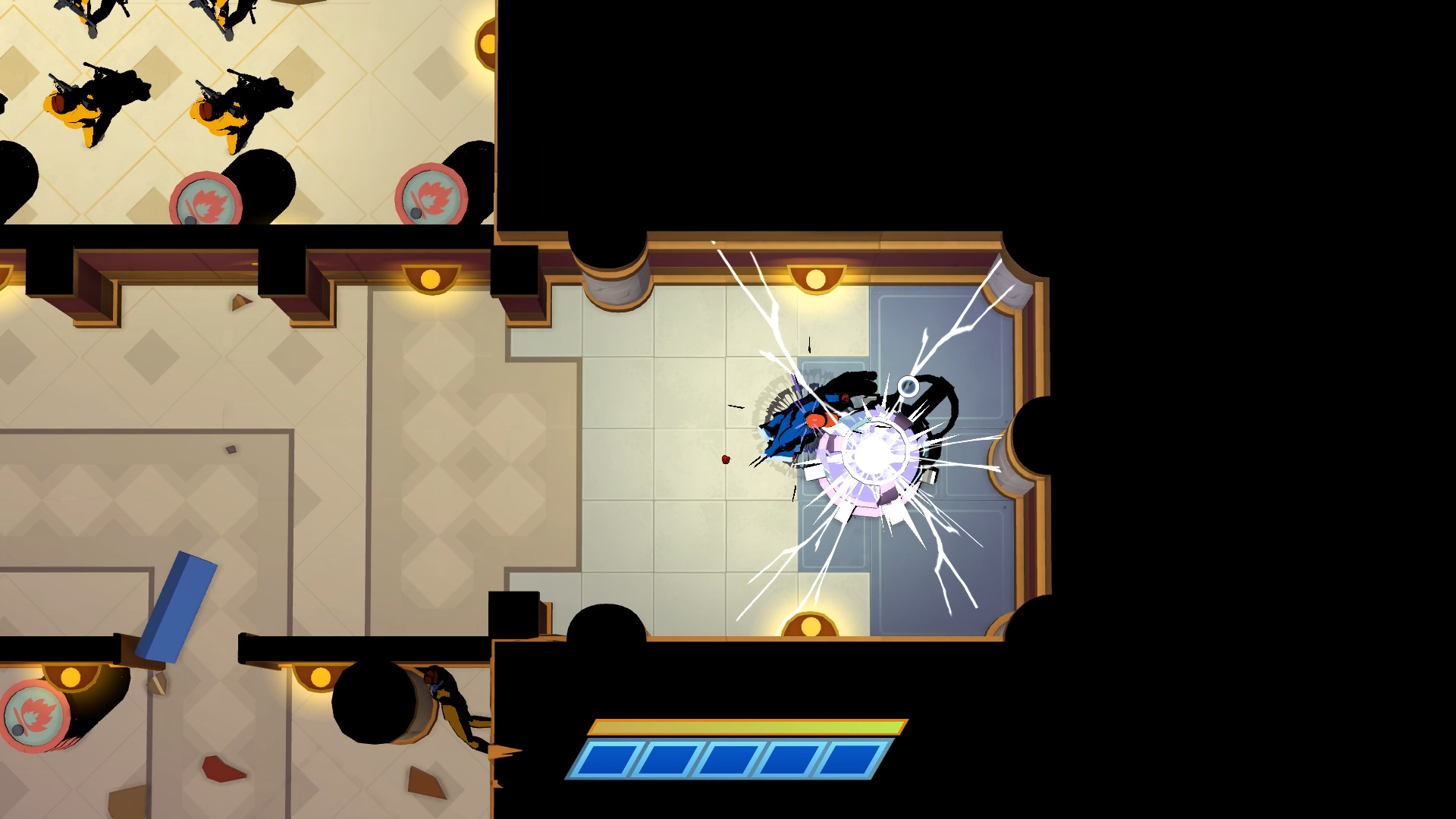 There’s pretty much no interface to worry about. The screen is mostly distraction free, with only the blocks centred in the bottom of the screen showing your shifting power, and then the orange bar that fills up that’s situated just above the blocks, once filled you know that if a bullet makes its way towards you, slow motion will automatically activate. If holding something it’ll be labelled in the bottom left, and objectives will appear in the top right, but overall there has been a good amount of thought put into the UI with no need for maps, health meters, combos, and the like. The minimalistic feel really helps with concentration and really draws you in. 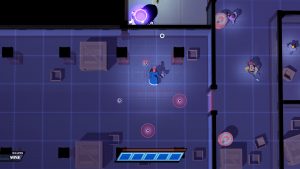 Music follows the pace of the game but after a while, especially if you’ve been dying on a level several hundred times, it becomes less prominent. It begins to fade away as your brain blocks it out for more focus on the fast-paced gameplay. It’s a similar experience to when you’re driving a car and turn the volume down to navigate unknown streets, except your brain turns down the music unwillingly. Sadly I didn’t feel like it was all that memorable, but there were certainly tracks that stood out more than the rest.

Mr. Shifty is currently available for the Nintendo Switch and PC with other console launches in the works. It’s a title I would recommend for sure, it’s fun, and it really makes you want try again, and again, until you get it right. The only thing I find is that sometimes it’s a little bit too fast, so some players may find themselves stuck  and just giving up due to not being able to keep up with the events. Otherwise, my time with it was great; there were bugs, such as bodies getting wedged in doors, and shadow glitches, and even broomsticks getting stuck on top of the ceiling; there were not, however any game breaking bugs during my time with it.