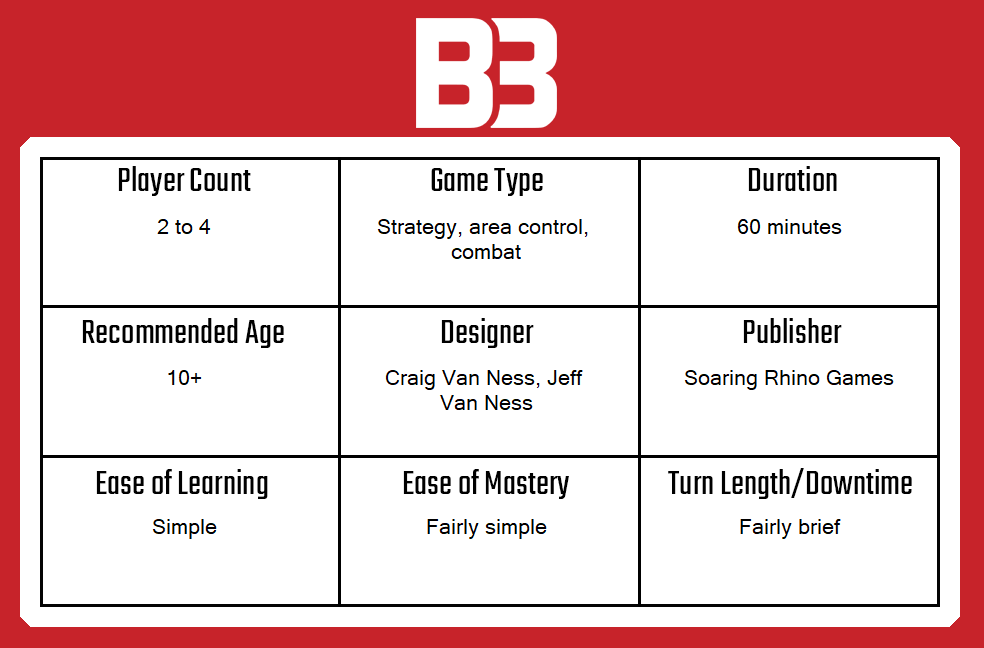 With a classic RTS aesthetic that brings classic games like Warcraft immediately to mind, Shifting Realms would be easy to dismiss as an also-ran strategy game. Look closer though and you’ll see a modular, randomised setup, highly variable victory conditions and a mix of worker placement, building and lightweight combat that makes Shifting Realms worth a second look.

Shifting Realms takes place on a map made up of three square boards that are placed side by side. The game is bundled with five different boards and two of them will be excluded in each game, so variation from one play to the next is fairly high. Each of the boards (or realms, effectively) is occupied by a different faction, with elves, orcs, dwarves, pirates and clerics included in the box. The players don’t control these factions directly. Instead they attempt to influence each of them in order to restore stability across the realms by completing victory conditions which in turn, score points. At the end of the game (usually when two victory conditions have been completed) then the player with the most points will win.

As each game of Shifting Realms unfolds, players will send out their scout units to mine and gather resources, which they’ll then use to construct buildings. More often than not, buildings will generate more resources, convert them into something else or convey further bonuses that relate to another action. Among these actions, of course, is combat, which is undertaken by warrior units that are represented by cute plastic meeples. You’ll use your warriors to chase other players away from buildings or resources and as a result, it’s important not to overextend your reach when playing Shifting Realms.

The other focus of your attention will be on the story cards and there is a deck of these for each realm. Some of these resolve effects directly in the realm itself — for example they might move the dragon which plagues the dwarven realm of Tyrfing, whilst other cards can be kept by the player to either resolve later, or to place in front of them for some benefit (usually victory points or resources.) Because all of the players (of which there can be two to four) will be chasing the different victory conditions, the game does have a pretty finite timer and usually lasts no more than an hour. 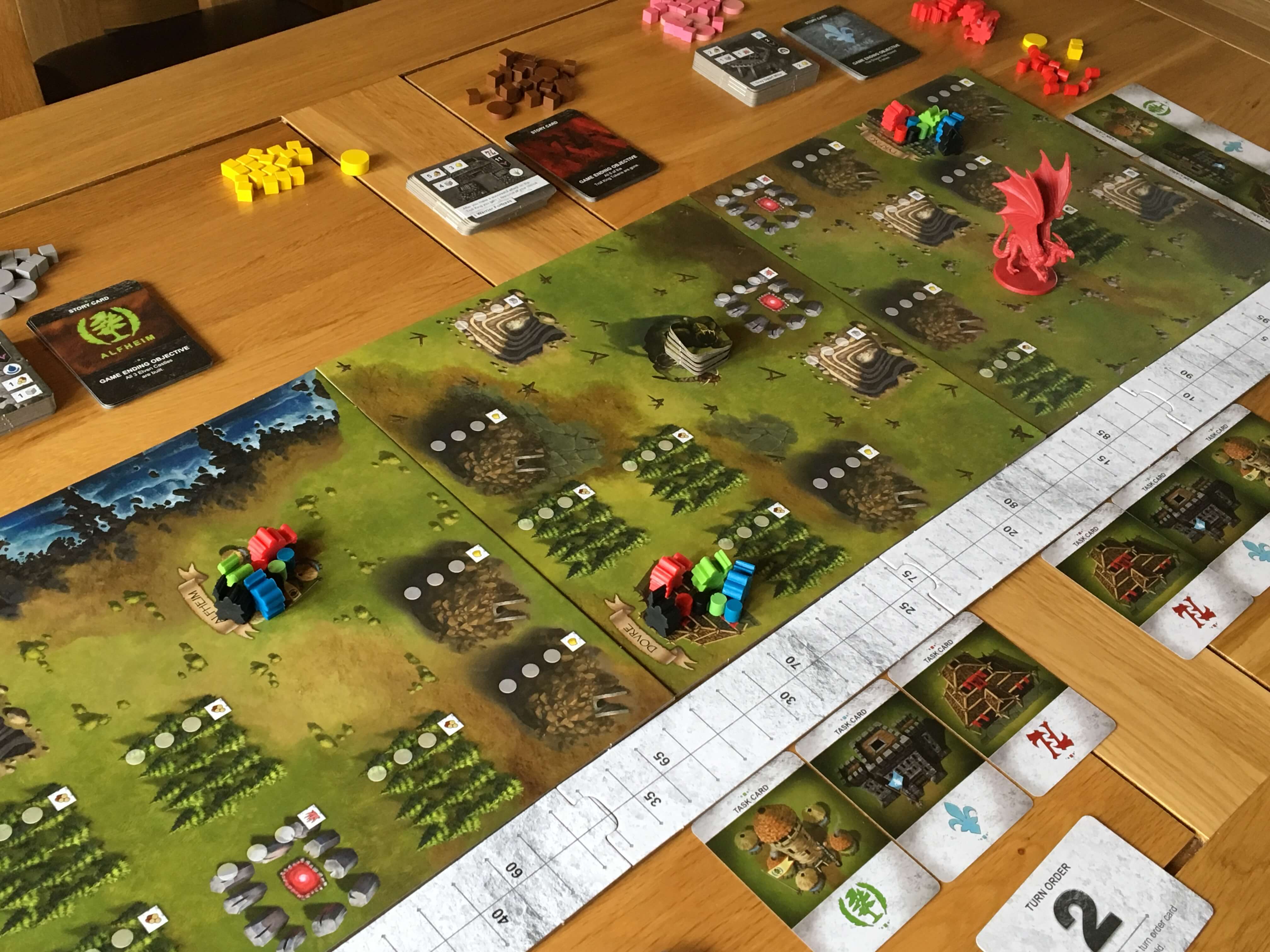 Whilst Shifting Realms is produced to perhaps a slightly lower standard than some of the ultra premium games that we see nowadays, it still looks excellent when set up on the table and has some standout features that I really like. Most of the setup depends on the realms that are in play and different combinations result in different levels of table appeal. Tyrfing, for example, features an excellent sculpt of a dragon, whilst the orc realm of Dovre features a stack of tokens that represent the spoils of the Troll King. Alfheim and Liberthasia are the only realms with water spaces that represent the coast, which is also a nice touch.

Every player has access to a number of scout pieces, which are represented by wooden cylinders in their own colour. These, as well as the other wooden components (cubes and disks for each of four different resources) are all fine, though I did notice a fair number of miscuts and some discolouration among the pieces — nothing to worry about, really. What is nice among the player components are the plastic soldiers, each of which is a cute plastic meeple holding a weapon of one sort or another. There are plenty of each of the components, so one thing you’re unlikely to worry about is running out — if you do, then you’ll need to remove one of your pieces from elsewhere to spawn the new one.

As I mentioned, there are story cards for each realm, as well as objective cards (which are usually kept secret by each player.) The story cards are presented with about fifty percent artwork and then some rules or event text. The artwork is of a very good standard and both the quality of the cards and the art that’s on them reminds me of Magic: The Gathering, which is no small praise. More often than not, the rules are presented clearly on these cards with little ambiguity, which is also true of the rulebook. There are a couple of minor idiosyncrasies that have resulted in an errata being published by the design team, but they are no more prevalent than in most games and it’s great to see that they have already been handled formally. 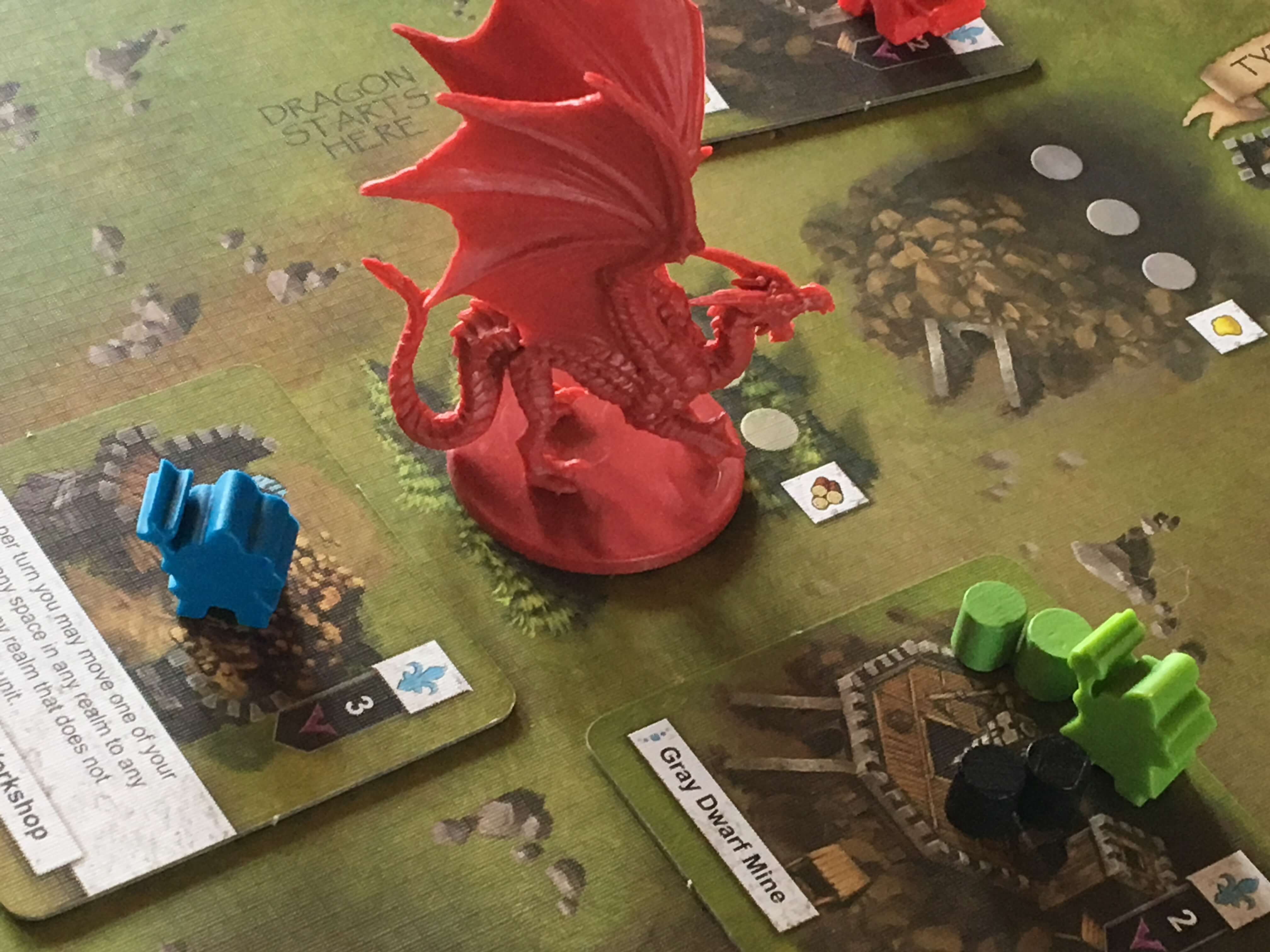 On their turn, players have a few options to choose from and they can take any three, except drawing of a story card, which can only be done twice per turn. After the three actions are complete, the player will collect any resources due to them based on the locations of their scouts and any buildings that they control. So to summarise, the four key actions are as follows; recruit units, move units, build structures and draw story cards. Fighting isn’t an action, since it happens as a consequence of two or more different players occupying the same space following a move action.

Each of these actions is fairly self-explanatory and you’ll get used to them very quickly. Recruitment involves paying one gold to take any combination of up to two scouts and soldiers (so one of each, or two of either kind) and then placing them into any town hall space or building that is under your control. It’s fine to split these units between buildings and importantly, if you have no scouts on the board, you can place two for free. Movement is just as simple — take some (or all) of your units from one space and move them up to three spaces either horizontally or vertically.

Building is marginally more complex, but still very straightforward. Firstly, the player must assess which building they can afford and then pay the cost (which is shown on the back, grey side.) Each building can only be constructed in the realm that it relates to and in the location that is indicated by its type (so a mine can only be built over gold, for example.) The player then places one of their scouts on it to indicate that it is their building (at least for now.) Buildings can be placed in spaces either occupied by or adjacent to their troops, or adjacent to their existing buildings. Drawing story cards is simple — take a card for each action (up to two) from any of the three realms in play and then action what it says on it.

Fighting can happen when two or more players occupy the same space, although it is always optional — a fight breaks out when the active player decides to attack the other player(s.) Resolving combat is simple and quite smart, because defending scouts (which can’t fight) is a key strategy. Each soldier can “protect” up to two scouts, so when an aggressor declares an attack against a mix of scouts and soldiers, she can only target either soldiers or unprotected scouts (in cases where the number of scouts exceeds the number of allied soldiers to the extent that some are unprotected.) When soldiers meet in battle, it’s pretty much always a one for one exchange, unless a card mandates otherwise.

There are plenty of other rules to take into account, of course, but you’ll find that these are all fairly logical and related to one of the main actions. After these actions are complete, players will collect resources based on the resource spaces that they have control of and how many scouts you have there. So, for example, if you have three scouts on a lumber space, then you’ll collect three lumber. This structure of actions, then collecting resources continues until one of the victory conditions are met, at which point scoring is tallied and a winner is declared. 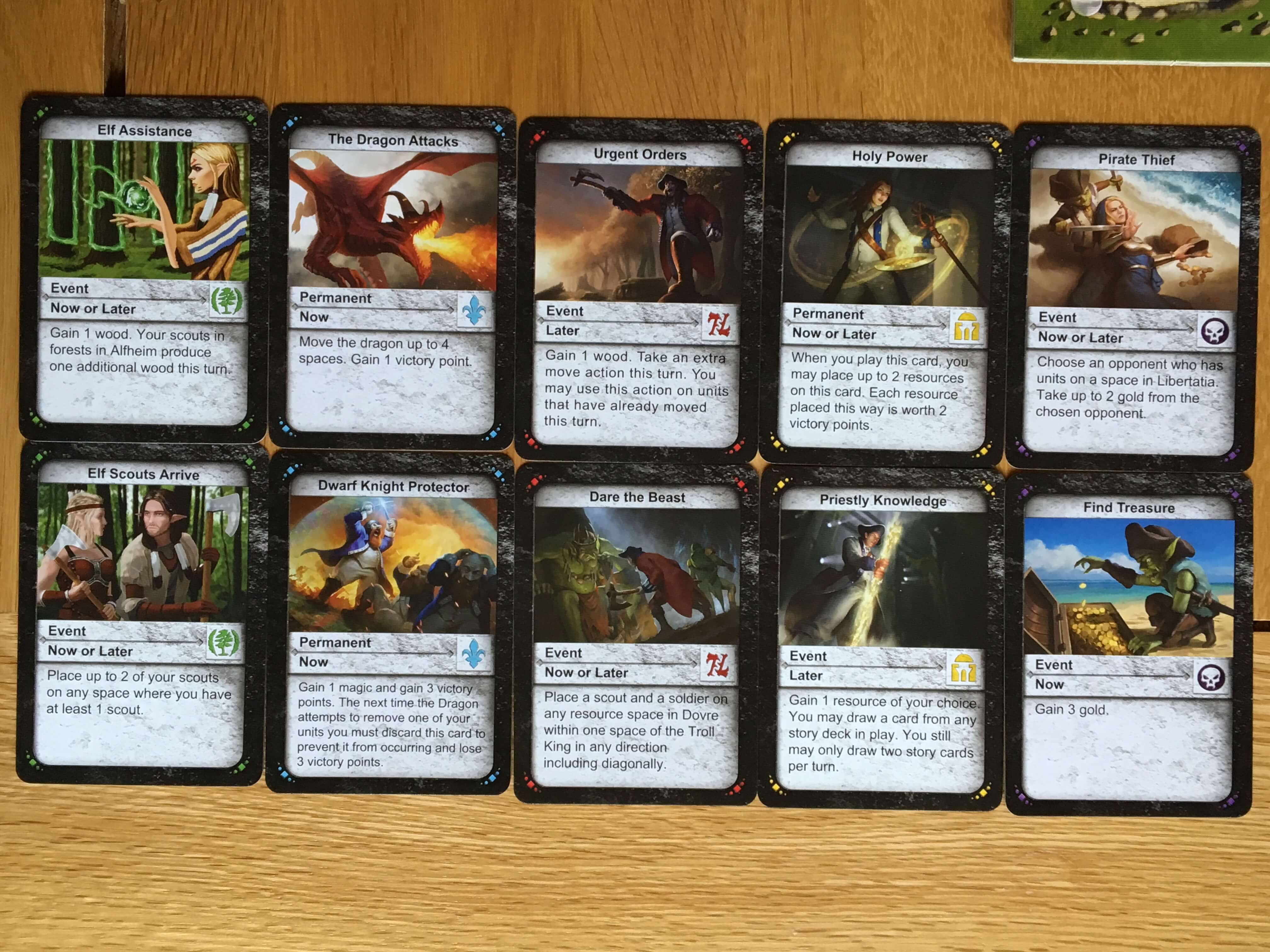 I mentioned earlier that there is a visual influence on Shifting Realms that appears to be somewhat similar to the original Warcraft, or perhaps its sequel. Both of those games were played from the “classic” ever so slightly angled top down view of real time strategy games from the era. The similarities are not just visual however, because Shifting Realms also has the feel of collecting resources, building up forces and then edging out the opposition either through direct conflict or simply because you have a larger standing army.

It’s a mistake to assume that Shifting Realms focuses entirely on force of arms however, since direct conflict is never really an actual win condition in its own right. Sure, having a large army and a lot of infrastructure (buildings do score points) will contribute to the final scoring, but if you focus solely on building up an army, then it’s likely someone else is using the story cards or battling the troll king in order to find a way to win. The inclusion of five realms and the use of three in each game does increase the potential for replaying Shifting Realms, although I think it’s possible that later expansions could add two or three more to really make high variation a feature.

I do think that Shifting Realms misses a couple of tricks in order to maintain simplicity. For example, there could be more variation in the story cards and ways to close out each realm, but I understand fully why the designers took the route they did, in order to keep things nice and simple. A more complex take on the game might also introduce areas that generate victory points per turn, or ways for the players to interact more through trade, for example. All such ideas would increase the complexity of Shifting Realms by orders of magnitude though and make no mistake — it’s very enjoyable for what it is anyway. 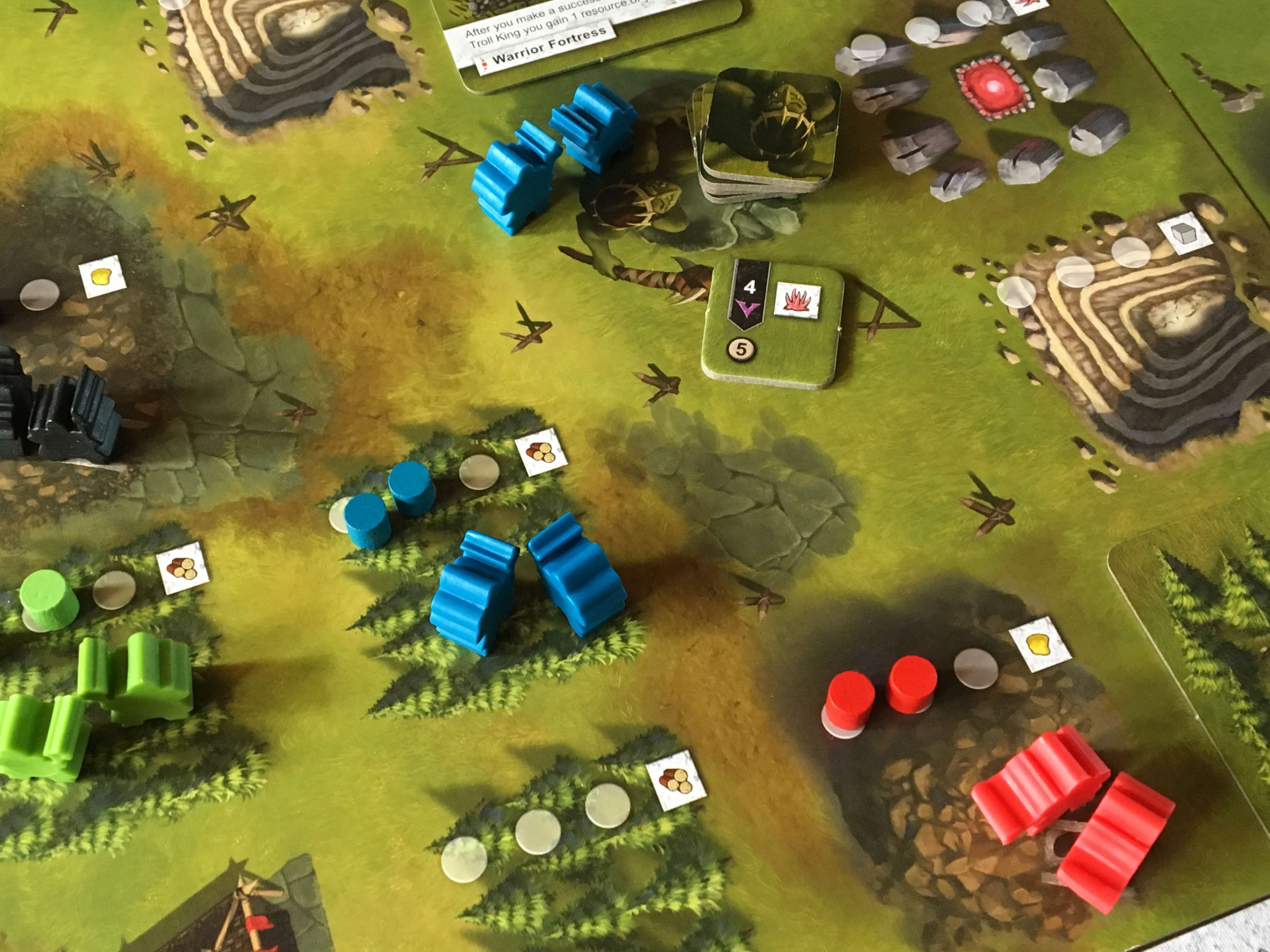 With its real time strategy influences, unique setup and variation potential and simply because it has good, solid and repeatable gameplay, I find myself unable to knock Shifting Realms. It isn’t the highest budget or most beautifully produced game that I’ve ever played, but it does have an old school honesty to the way it plays that I find very appealing. It takes very little time to set up, very little time to explain and to be honest, very little time to play. Anyone involved can consider themselves an expert within one or two plays (having seen all the realms) and with four or five games under your belt, you’ll have a good idea of which strategies are the most efficient routes to victory given the realms on offer — and yet it’s always a surprise when an opponent has a similar or sometimes better plan!

If you’re looking for something different (in board gaming terms) yet immediately familiar (for anyone who has played an old school RTS game) then you need look no further than Shifting Realms. A fun, unique and attractive offering from a relatively new studio and one that I hope will be expanded in the future.

A copy of Shifting Realms was provided for review purposes. You can find out more about it on the website of publisher Soaring Rhino Games.