Bluffing has always been a cornerstone of traditional card games, with games like Go Fish, Bluff and S**thead (or your local variant thereof) all being popular classics the world over. But sometimes, a game like Sheriff of Nottingham comes along and demonstrates how a bigger production can take those same simple mechanics and do something really interesting with them. In 2021, a Second Edition of Sheriff of Nottingham was released, and I’ve finally got my hands on a copy.

Sheriff of Nottingham Second Edition is very similar to the original game (which was published by Arcane Wonders back in 2014. The headline differences between the two versions are that Sheriff of Nottingham Second Edition is now published by CMON and rather than including a detailed (but expensive and unnecessary) miniature to represent the titular Sheriff, there are now cardboard standees for him and his two deputies. 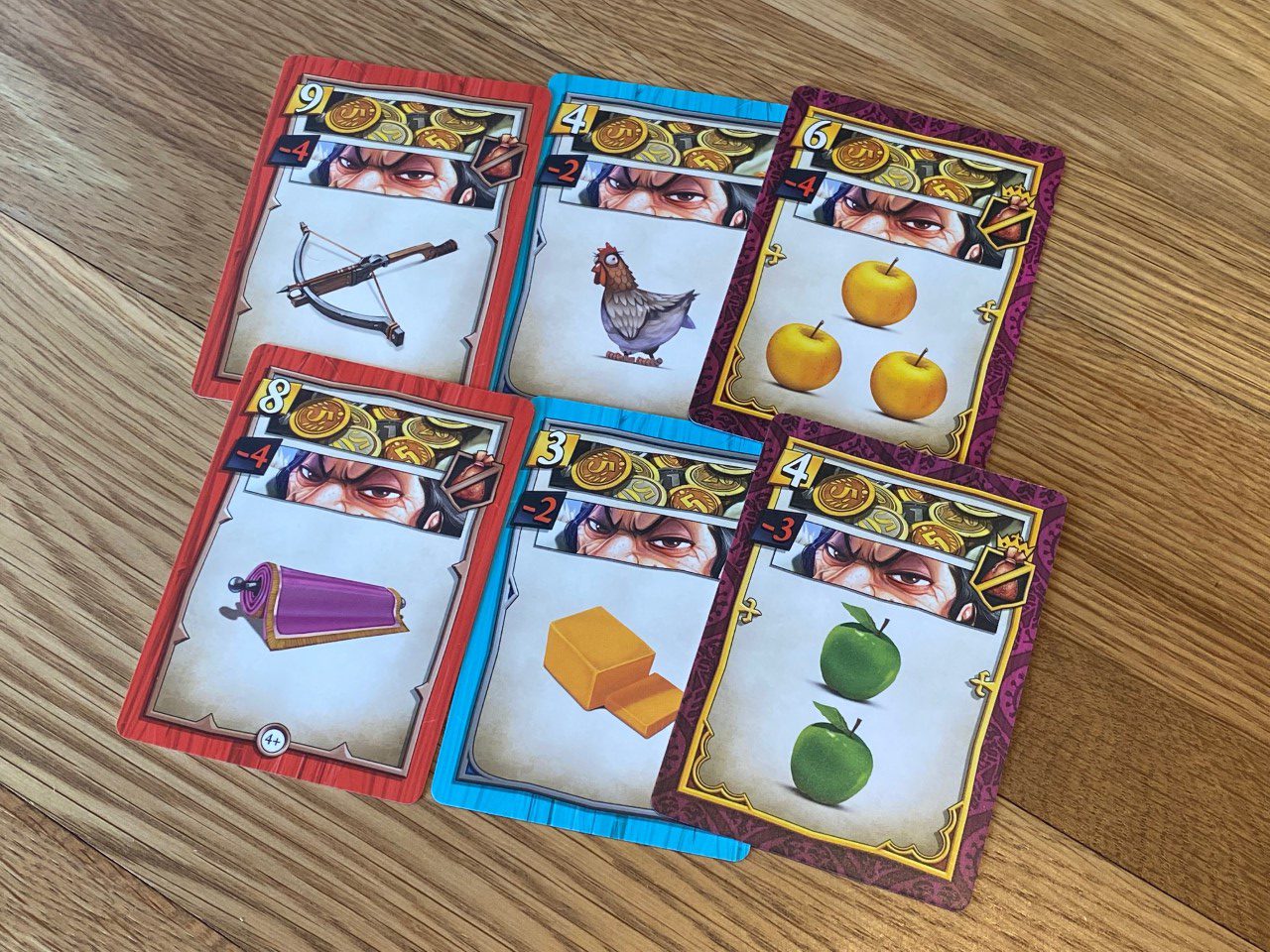 On the plus side, anyone who knows the original game will already have worked out that by including the deputies, Sheriff of Nottingham Second Edition actually allows up to six players — which was only possible in the original game with the addition of an expansion. Another expansion also present in this version is the Black Market, which simply adds a few new cards and slightly more complex rules.

In terms of component quality, Sheriff of Nottingham Second Edition is kind of both less and more at the same time. The lack of the Sheriff miniature is a shame (and a surprise to see CMON producing a version with less plastic than an older printing). Also, I would say that Sheriff of Nottingham Second Edition has slightly less interesting card art, which uses smaller, more classically illustrated pictures, rather than the larger, more cartoonish art of the original. 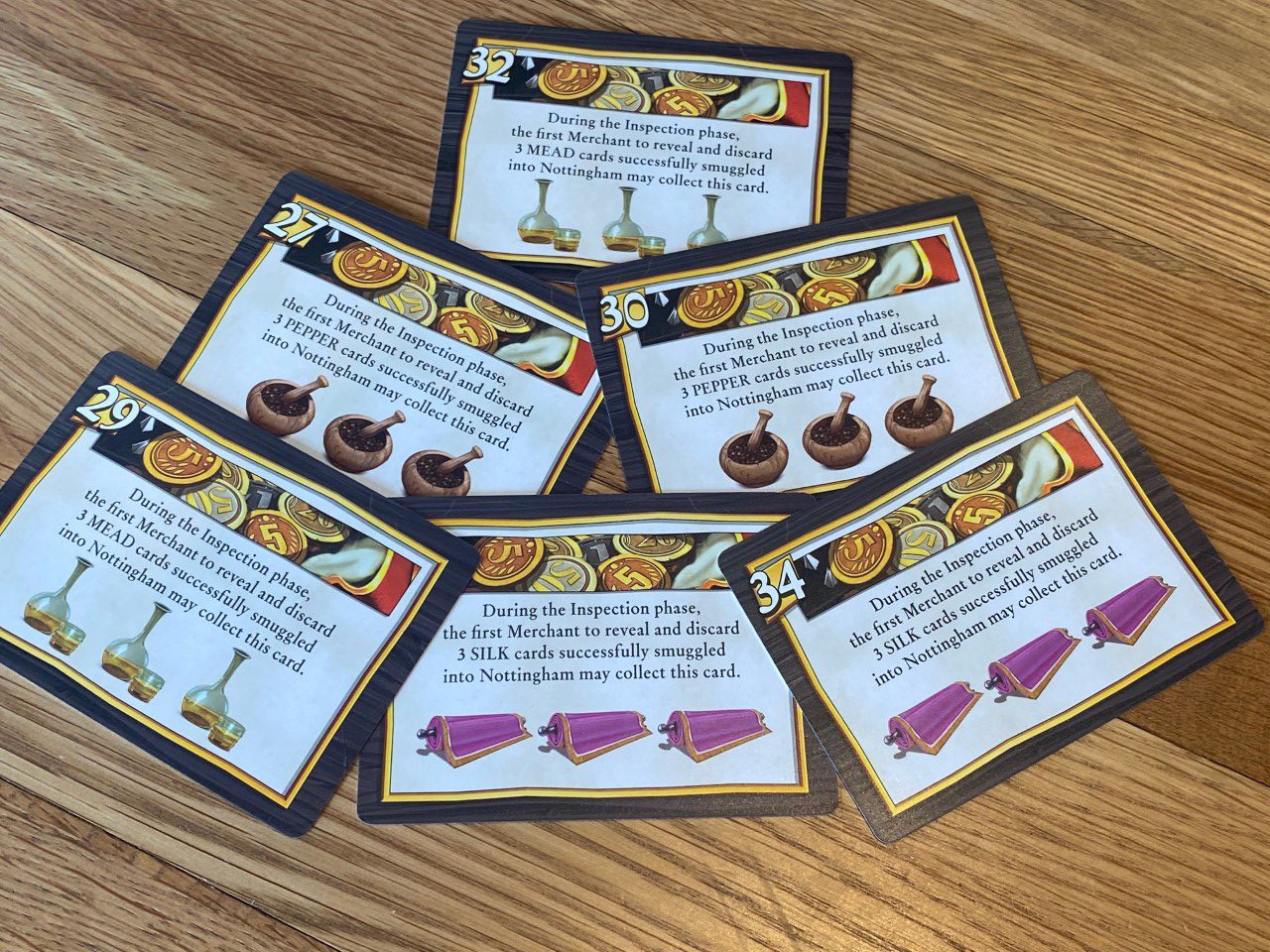 When you add these things together and compare the raw production value of Sheriff of Nottingham Second Edition versus the original, the second edition still comes off well. The extra expansion content is well worth having, and the new game is available at a very sensible RRP, whilst the older version commands a “hard to find” premium on the second hand markets you’ll see out there.

But what is it that might make you want to consider buying any version of Sheriff of Nottingham? Why does this classic game occupy such a high ranking both on BoardGameGeek and in the hearts and minds of board gamers? Well, I have to say that whilst I somehow avoided playing the original, I am so glad that I’ve had the chance to play Sheriff of Nottingham Second Edition because it is such incredible fun. 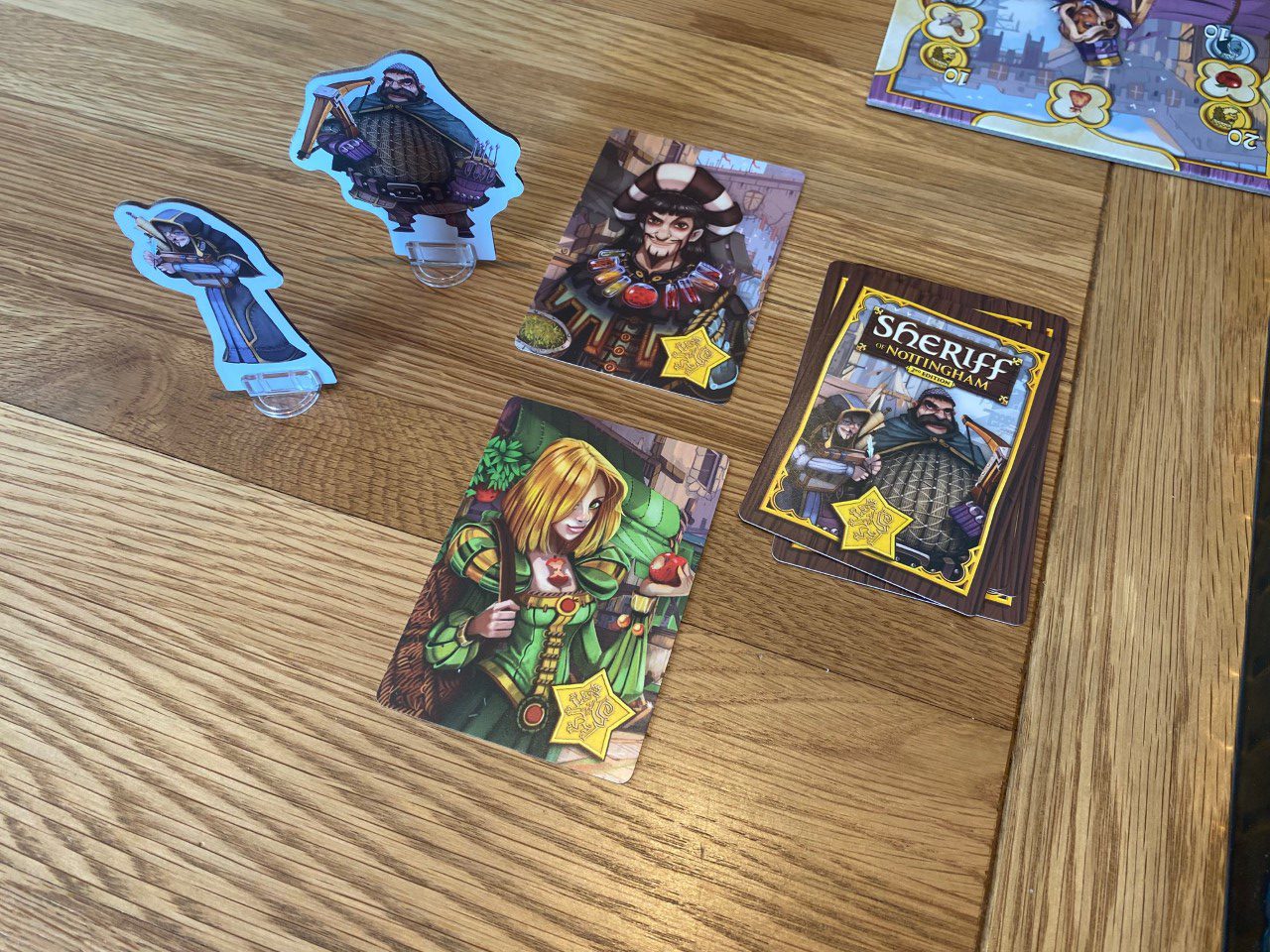 Players begin the game with six cards — which they will keep secret — and a pouch with a lovely press-stud on it. One person will be designated as the Sheriff (or two people will be designated deputies, should you be playing a six player game). For those who are not representing the law, the market phase begins — at this point each player discards any number of their cards (face up) and then draws back up to six. During this process, appealing to the Sheriff or deputies and explaining that you are discarding because you plan to be completely honest about what comes next is encouraged.

Next, each player will choose up to five of their cards and place them into their press-stud bag. They will then put the bag down. When everyone has done this, they will each try to pass through the gates of Nottingham — and the Sheriff (or deputies) may decide to stop them and check their bag. Again, coercion, threats and even bribes are encouraged here — with players (for example) offering the Sheriff coins, goods and/or future promises in order to avoid being searched. 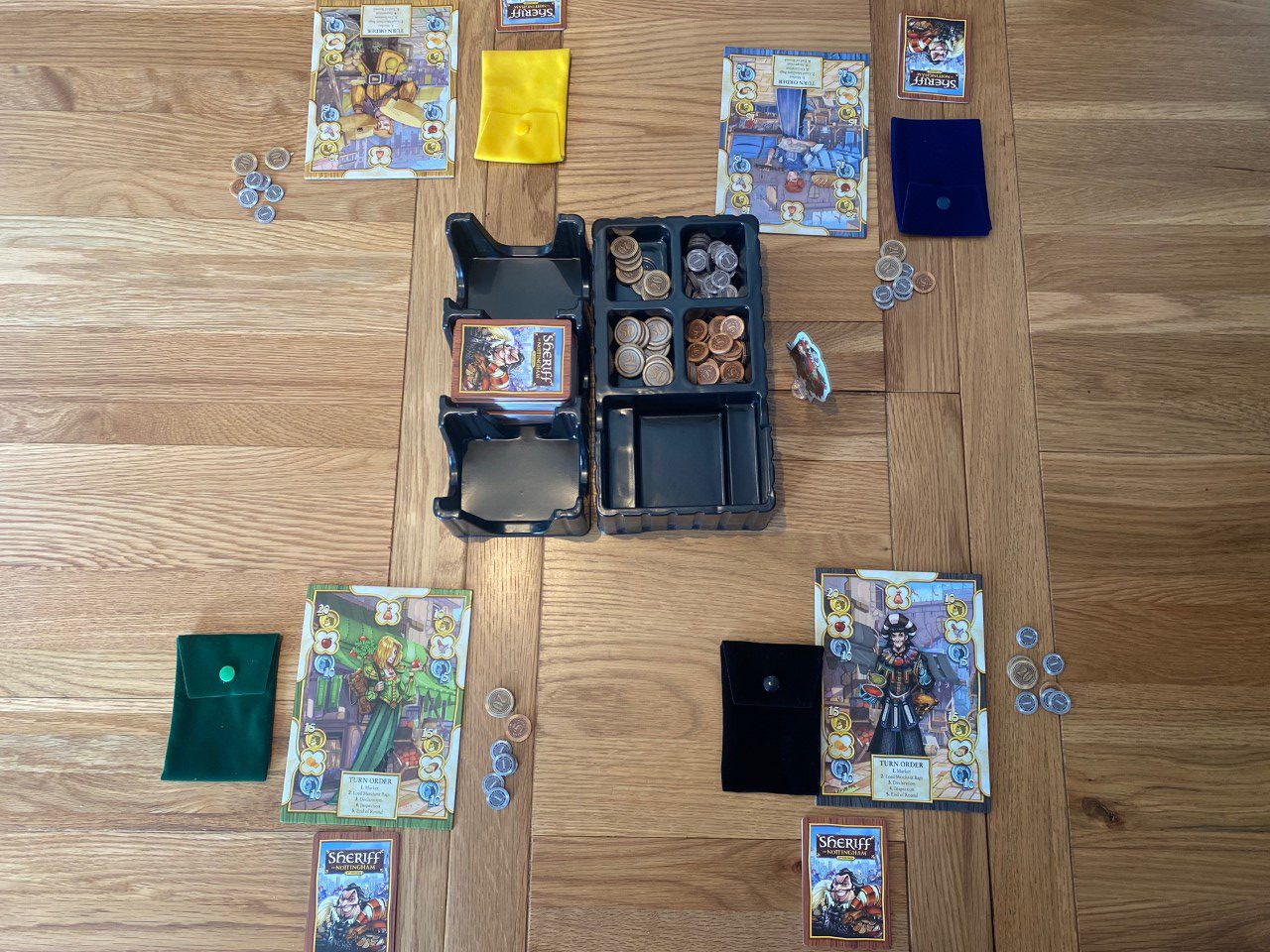 The thing is, when a player presents their bag to the law, they must state one type of legal trade good (from a selection of four) and the number of cards in the bag. The number of cards must be true, but the actual goods might be completely different to what was declared. A player might say “four bread Guv’nor, nothing to see ‘ere” but in actual fact, their bag contains one bread, one apple and two contraband cards.

If we take this example and assume that the Sheriff decided to search their bag, then the player would end up paying a fine for every item that was not bread — in this case that would be both the contraband items and the apple, even though the latter is a legal good. The bread, however, is legal and was declared, so the Sheriff would need to pay the player a penalty for that, since he was partially wrong in his accusations. The player would then lose all of their contraband (and the apple) to the discard pile, and the bread would go on their personal market stall board to add to final scoring. 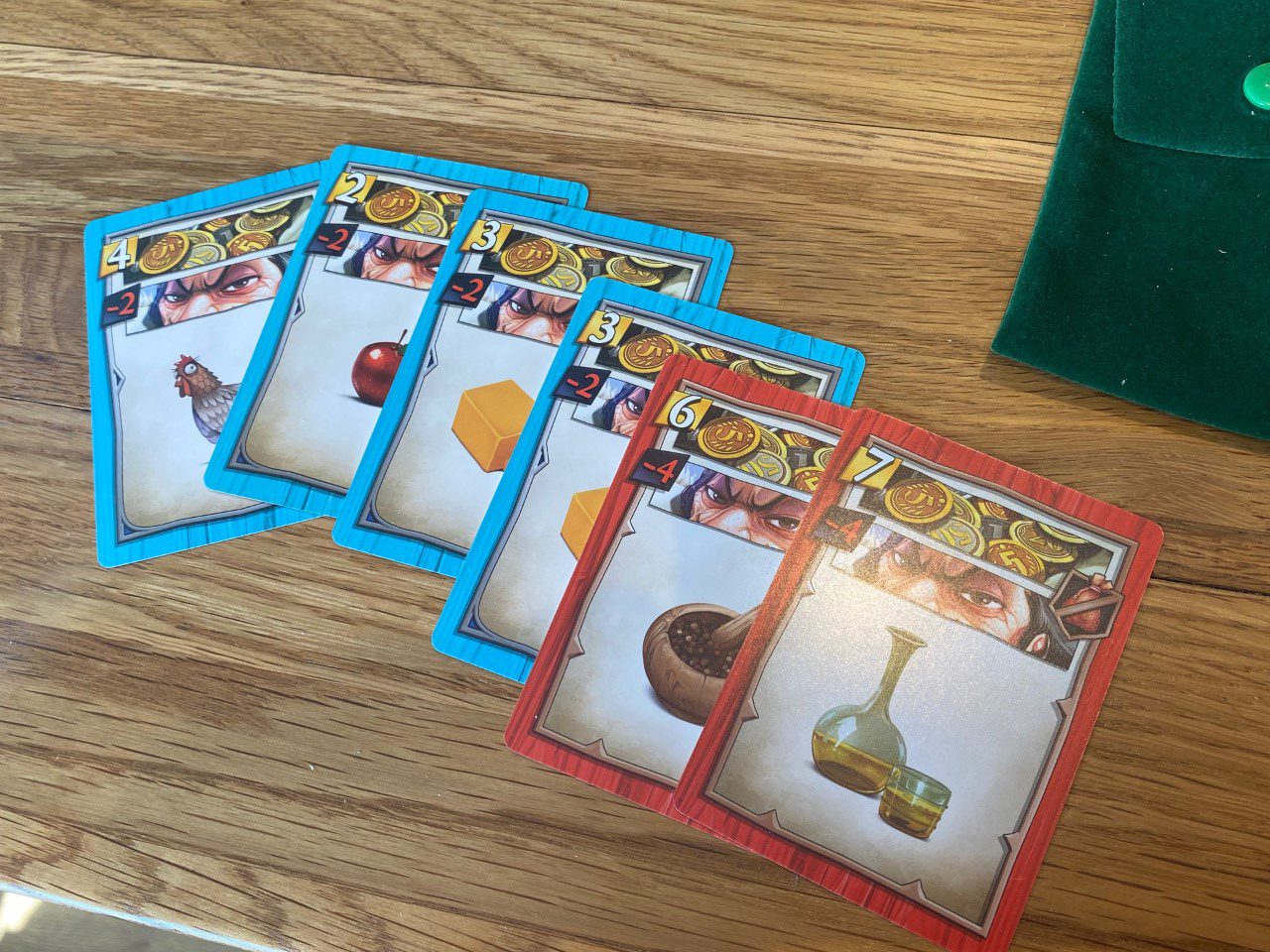 In a case where a player declares four bread and actually has four bread, then the Sheriff would pay a significant penalty, and what’s more, the player would be able to put all four bread into their market stall — a rare but powerful turn. Of course, in case such a turn happens, that player might take the chance to try and goad the Sheriff into checking their bag, perhaps by offering to pay a suspiciously large bribe or offering some other kind of deal.

With the Black Market cards in play, the players have the chance to score additional points by achieving certain objectives. This might include having a certain value across all the contraband cards that have reached your market stall (and normally kept secret) or achieving a certain number and combination of trade goods. The royal goods expansion adds a handful of special cards to the deck that generally provide two or three of a standard good (great for scoring) but which are, due to their royal providence, very illegal. 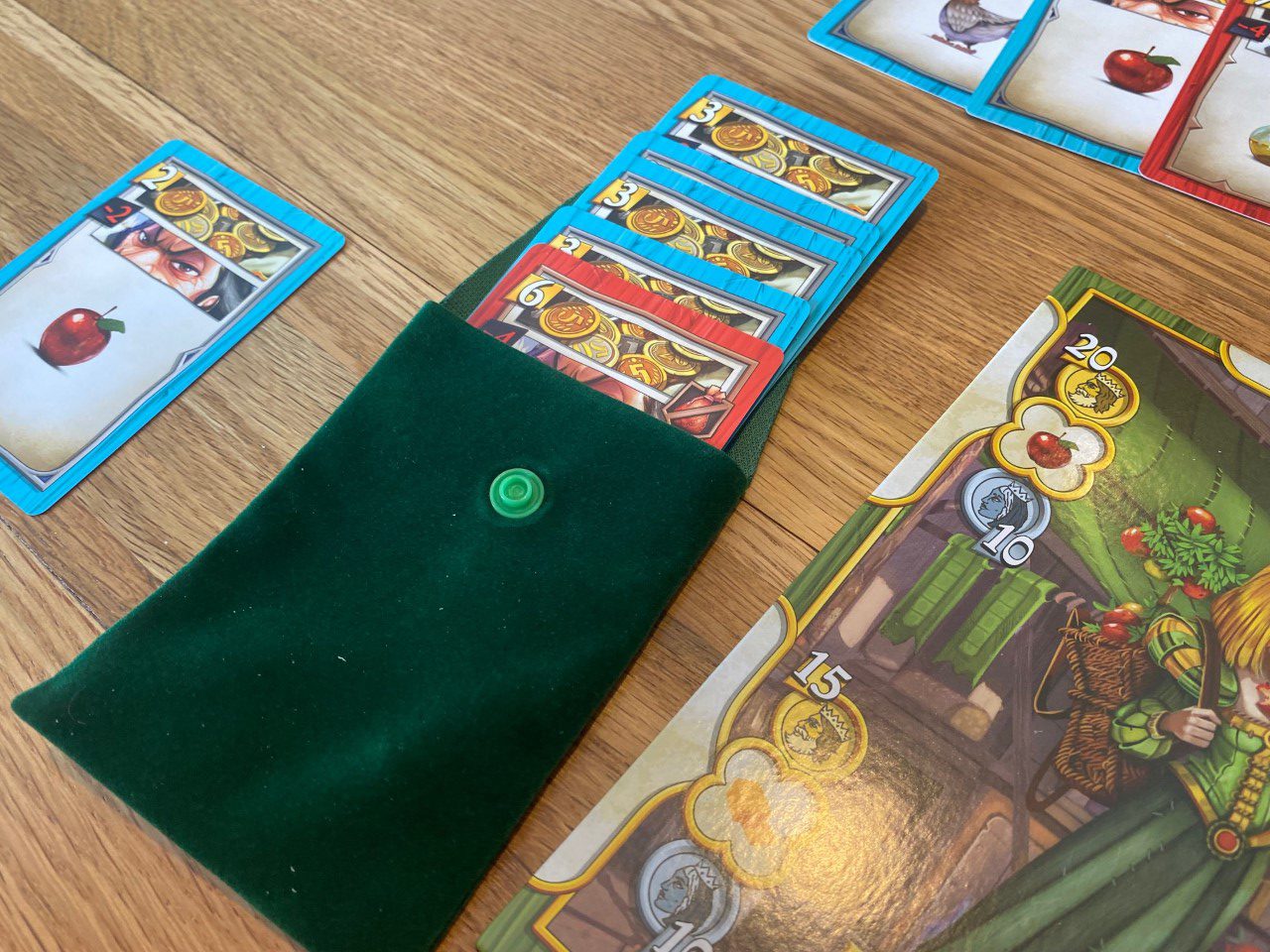 When playing with the six player variant (which is basically just the deputies and sixth merchant board) the rules are exactly the same, except that the deputies can decide on searches together — sharing the risk and reward. Where deputies disagree (maybe one wants to search and the other doesn’t) then that’s fine, and the pushy deputy simply performs the search and gains the reward (or penalty) on their own.

You can grab Sheriff of Nottingham Second Edition from Amazon.