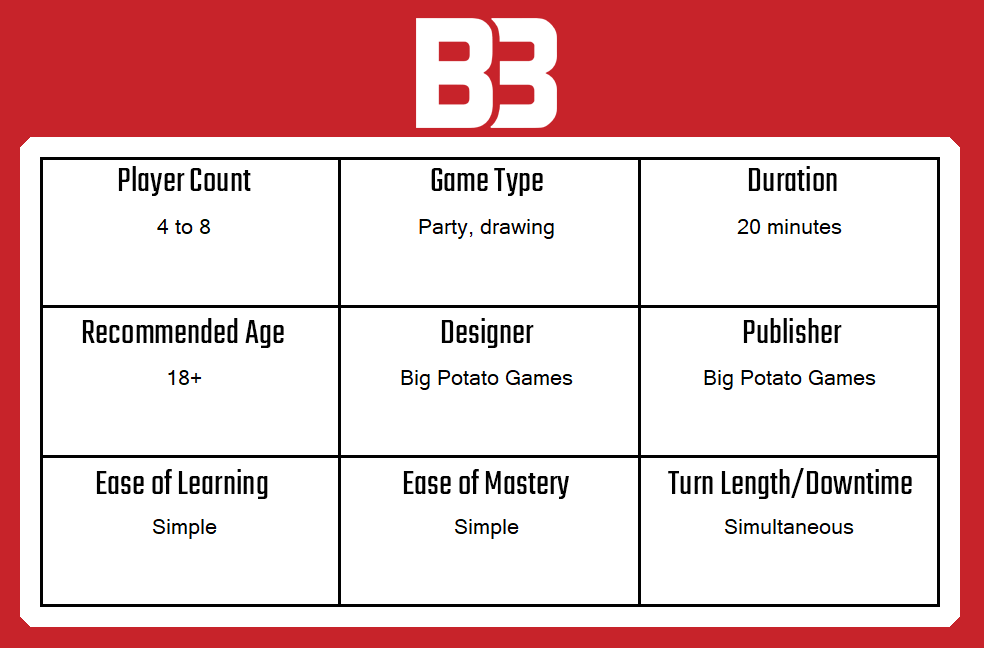 Have you ever wondered what would happen if you combined the classic childhood game known as Chinese Whispers (in the UK) or Telephone (in the USA) with childish drawings of things like poo, boobies and gentlemen’s appendages? If so, you should read this review about Scrawl, a fantastic party game from Big Potato Games.

In an unusual twist to my normal review format, I’m going to describe the components in Scrawl before I go into the overview and structure since they flow into each other. Broadly speaking, Scrawl is a really attractive addition to any gaming shelf, with a shiny yellow box that (from the side, at least) masks its provocative, NSFW nature. Inside the box, you’ll find everything you need to play the game right away, including a very brief manual, which I will more or less replicate entirely just by describing the game…

There are eight pens in the box, plus eight thick, numbered, player boards. Each of these comes with a clip hooked over the top of it. After that, there is a huge pile of blank cards for the players to draw on, as well as an even bigger pile of cards (each of which has four keywords or phrases in different colours) to prompt the players into action. This latter deck of cards is really what makes Scrawl what it is.

There are tonnes of cards and the variety of keywords on them ranges from the sublime to the ridiculous, but almost every single one converts into a hilarious sequence of drawings. The overall quality in Scrawl is high, with decent-quality boards, cards and pens — it even includes tiny cloths to wipe the boards clean again. The only downside for me is that the use of clips and individual cards to draw on a is a bit fiddly. 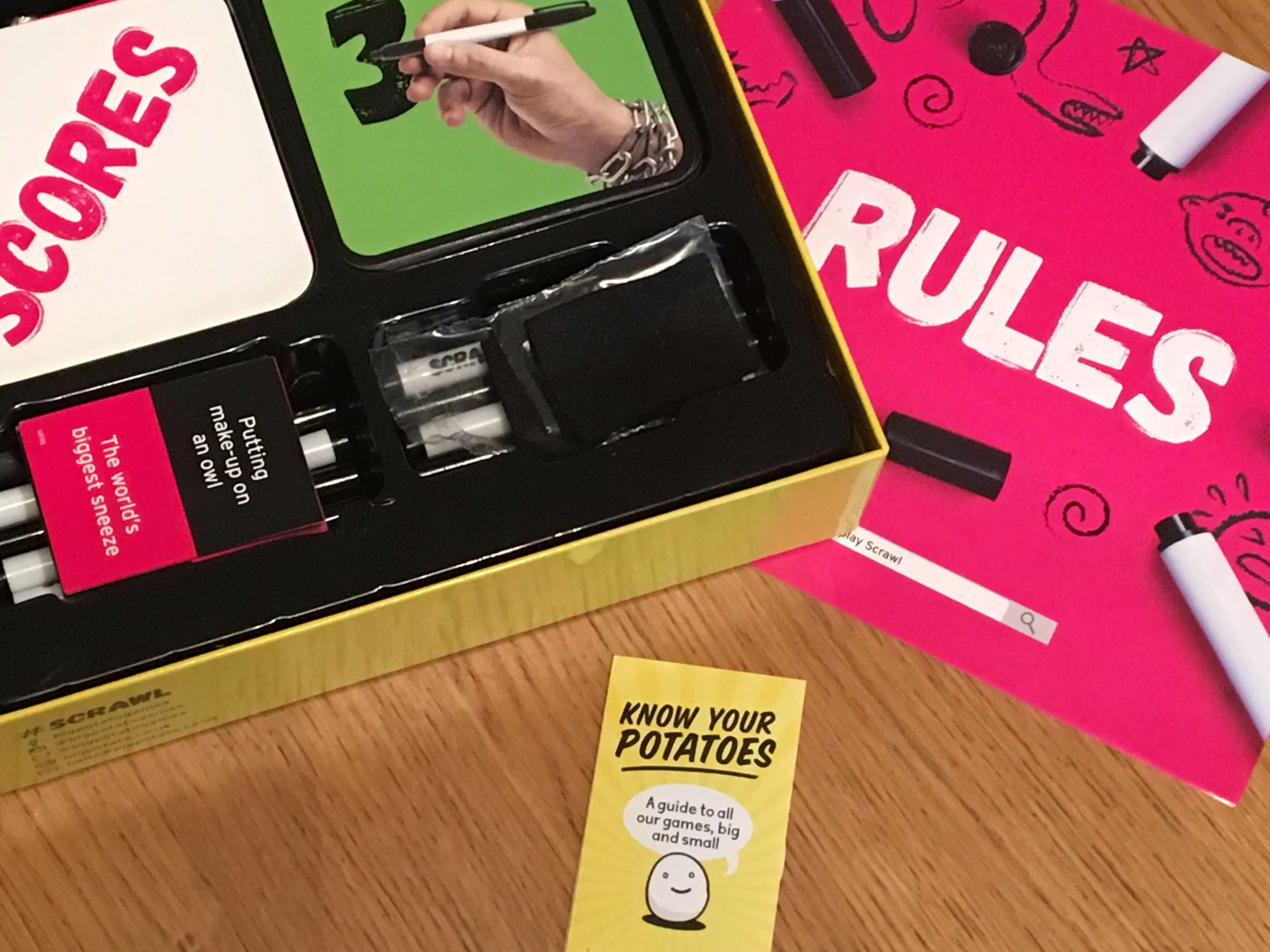 Scrawl is a very straightforward game that fits firmly into the party game genre. Because of its raunchy, adults-only nature, is also ideal when accompanied by a few drinks. In a nutshell, players must draw cards secretly, agreeing on one of the four colours on each card, then draw a picture of what that card says without revealing it to the other players.

Cards include all kinds of silly, rude, funny and irreverent nonsense for players to draw, ranging from body parts to physical acts and even emotional states. This, inevitably, results in drawings that are at best interpretive and at worst, just pictures of penises. Everywhere. Card in hand, the player draws their word as a picture on one of the thick, wipe-clean cards. They take a clip and attach it to their board, then pass it secretly to the next player.

As each player receives the clipboard from their neighbour, they look at the picture, take a new (blank) card, then write what they believe the picture might have depicted. In this way, a card might begin with ‘side boobs’ on the official card, but a picture of a crescent moon next to some kind of stick-person could easily morph into a description of ‘The Grim Reaper riding a pig’. The next player receives that description and attempts to draw it on another card, each time clipping their written or visual interpretation over the previous one.

In terms of the gameplay’s actual structure, there is a prescribed method for how to win or lose in Scrawl, but it’s rare for anyone to care about that. The game even comes with a couple of wipe-clean scoreboards and the winner is the player who reaches a point for each player, plus two more. Whoever draws each picture simply decides which other image or interpretation of their starting card was best, then gives that person a point. If any card actually makes it all the way around the circle and the final interpretation matches the card, it’s an automatic three points. 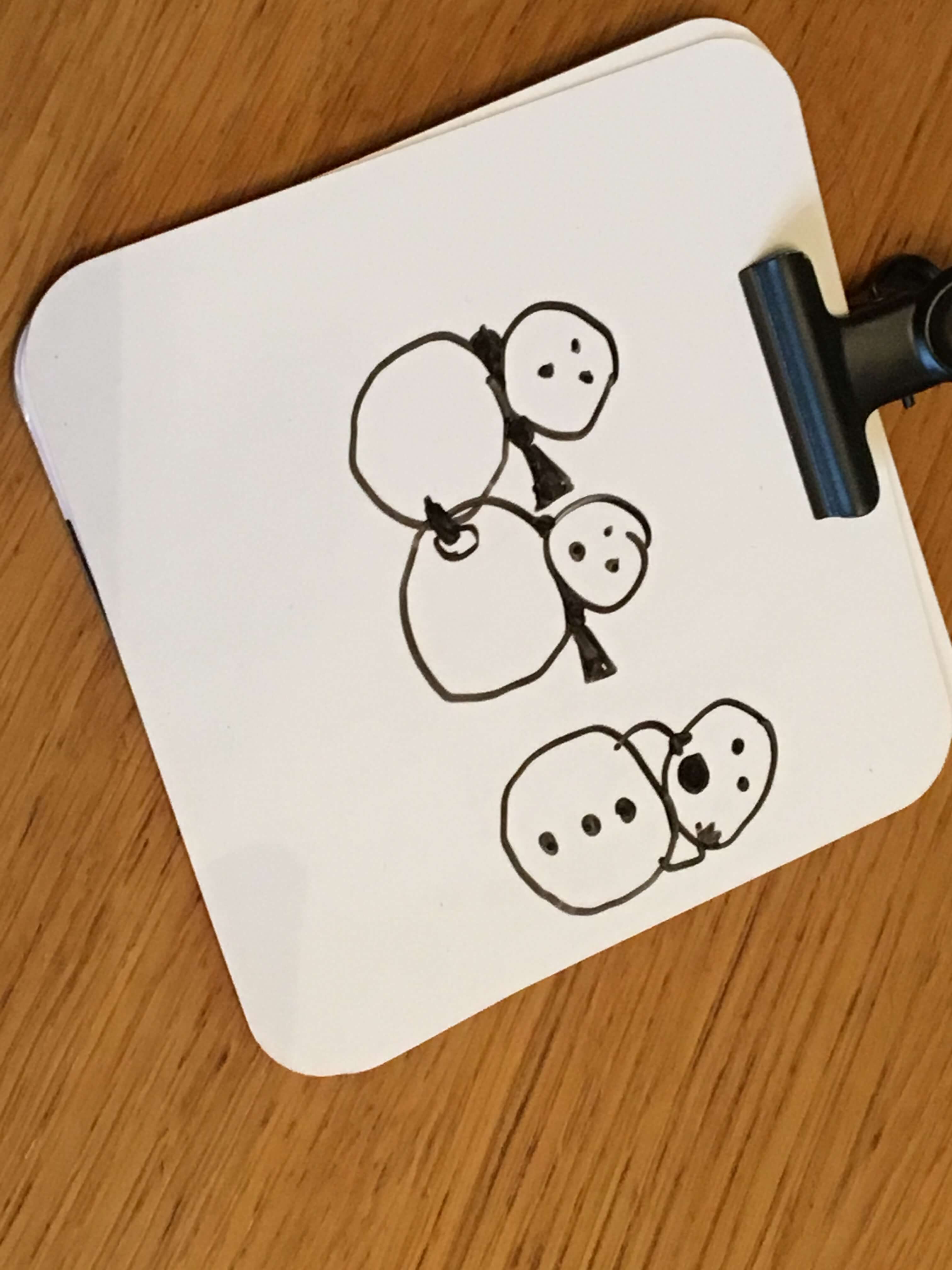 As you can imagine, Scrawl results in some fairly dubious drawings and some fairly wacky explanations of what those drawings have been interpreted as. It’s all fairly rude and raucous, so players of a very sensitive disposition will likely be offended very early in the game and may, therefore, struggle to enjoy themselves. I’m really not joking on this point — you’ll most certainly have to draw pictures of sexual content and bodily functions that are not really fit for normal conversation.

That said, I’d say that the majority of people in the target market for Scrawl are kind of okay with the kind of lewdness I am talking about. The cards feature quite modern, urban-dictionary-style descriptions of things to draw, so players anywhere between their teens and their mid-thirties will likely understand them and giggle simply at the concepts. Scrawl is designed first and foremost to make people laugh and enjoy themselves, so the competitive and scoring elements are fairly loose and, I dare say, quite secondary to the actual experience. 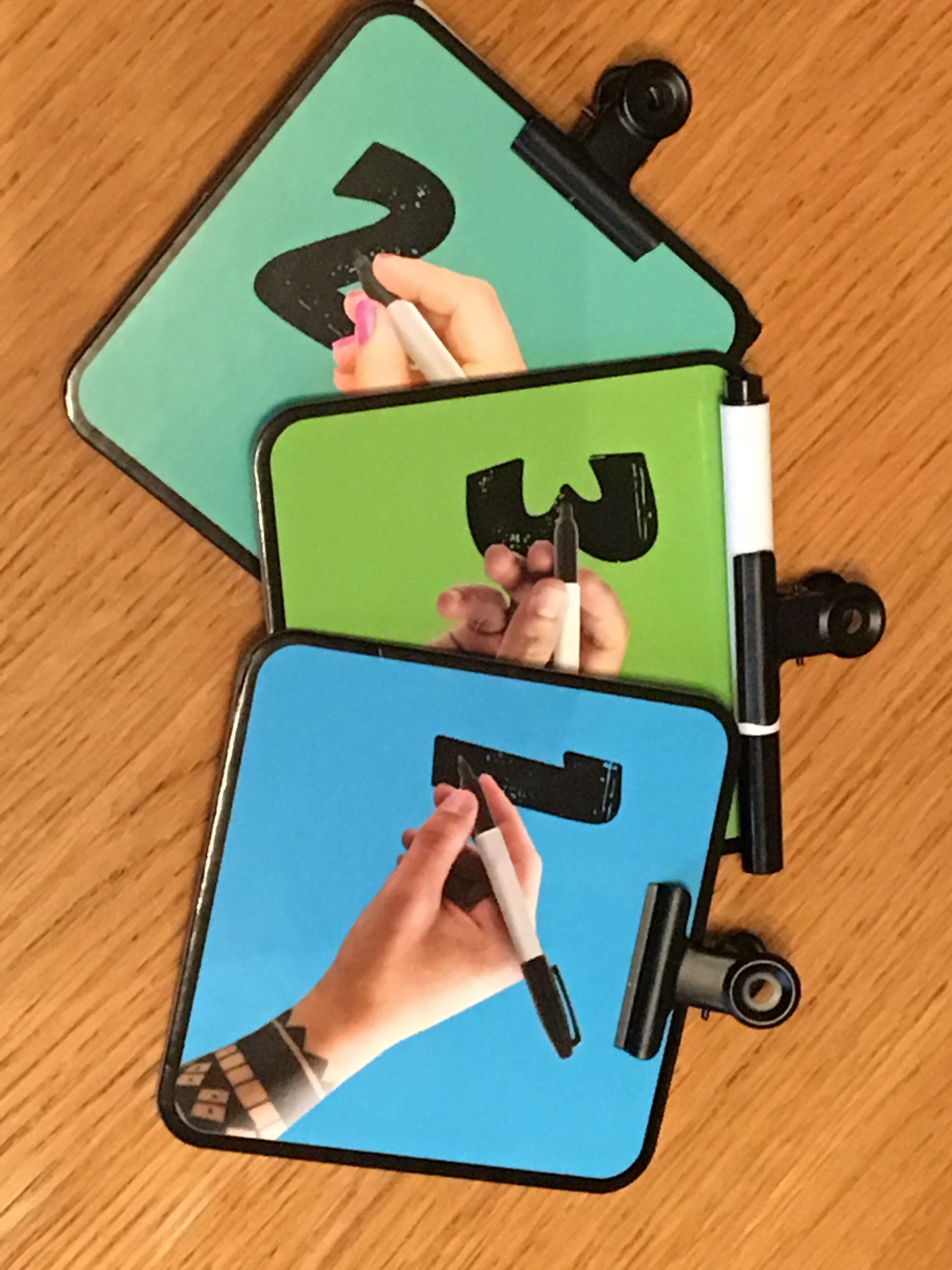 Scrawl certainly achieves what it sets out to do. It provides a vaguely defined structure for people to have a laugh amongst themselves at stupid stuff. Like the very best party games, it is capable of creating lasting moments, even if more often than not you’ll look back on them and cringe a little bit. It certainly isn’t for everyone, but I don’t think it’s possible to walk into buying it without realising what you’ll be letting yourself in for.

On the other hand, it isn’t a new concept and there is already a game out there called Telestrations (and its R-rated version, Telestrations After Dark) which essentially achieves the same thing, but with arguably slightly better components. To counter that point, the components are a secondary concern in either Scrawl or Telestrations and what Scrawl gets so, so right is the content on the cards that players have to draw. 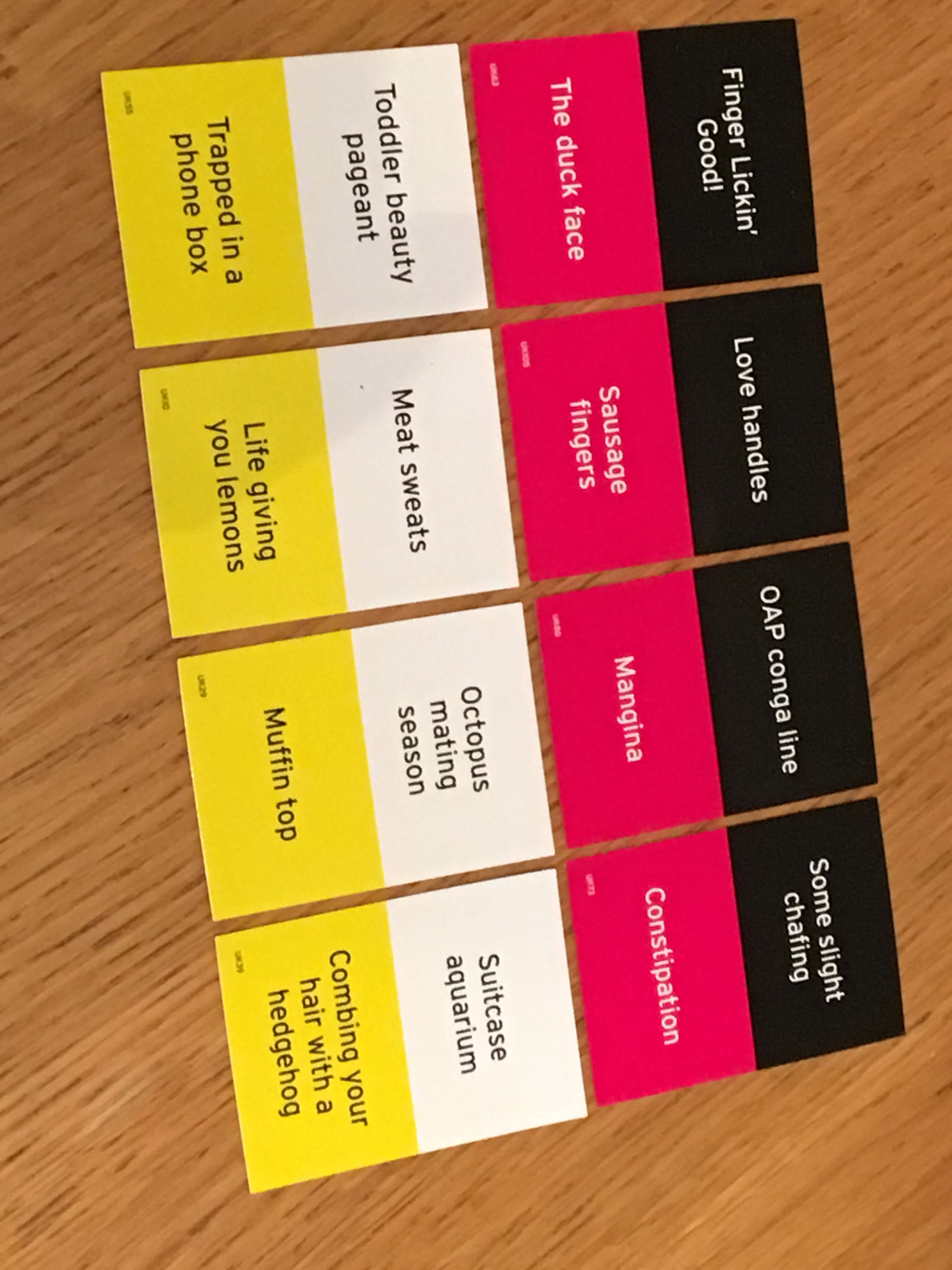 These cards are painfully funny at times, which in turn has probably made Scrawl my go-to game of this kind for the foreseeable future. Clearly, I won’t play it with my kids or my mum, for example, but I’d be more than happy to throw Scrawl on the table whenever I have a gathering of five or six friends of a like mind.

As one final point, I do believe that Scrawl works much better with six to eight players than it does with four, which is basically due to the fact that the more players there are, the less obvious it is who has drawn or written a particular thing. In any case, that’s not something to write the game off for and as such, I recommend it highly.

A copy of Scrawl was provided for review purposes. You can find out more about Scrawl on the website of publisher Big Potato Games.