Scorn is an atmospheric horror game that relies on the unsettling environment and unique world of mechanical functions to tell its grotesque story. Inspired by H.R. Giger, the lengths that the experience goes to exploit that type of mutilation and body-based horror to make the player feel uncomfortable exceeds anything I’ve ever experienced in interactive media before.

As a first-person horror title, Scorn may not nail the typical formula, but it certainly showcases horror in its own way. Exploring the depths of this alien-world hellscape, you are mainly focused on puzzle-solving, but when the going gets tough and nightmarish creatures begin to writhe out of pulsing, intestine-like walls, Scorn also introduces gunplay that is unique in its own way, matching the intense, body-modification theme of the game. There are no real jump-scares, but the sights that you see within the game could certainly be conjured up in your nightmares.

Scorn starts you off with no prompts or text to indicate what to do next and leaves you to discover how the world you’ve been released into operates. Moving through the environments reveals some clues of what is interactive and what is not, and while most games I would find this a demeaning experience, just taking in the visuals of what Scorn has to offer is a story in and of itself. Eventually, you come across weapons and tools that adhere to your body and make you into something more.

Every machine has its purpose, as they either serve as a puzzle part, a way for you to acquire a new weapon, or a means to refill your health or ammo. When you interact with them, they will take part of your body or an alien appendage that has been attached to your body to fulfill their purpose. This kind of interaction is unsettling the first couple of times, but you quickly get used to the squelching noises and tugging of muscles and tendons to complete your task. I feel like the team did a great job at keeping the interactions cryptic, but at the same time, they totally feel like they fit within this torturous and purposely violent world. 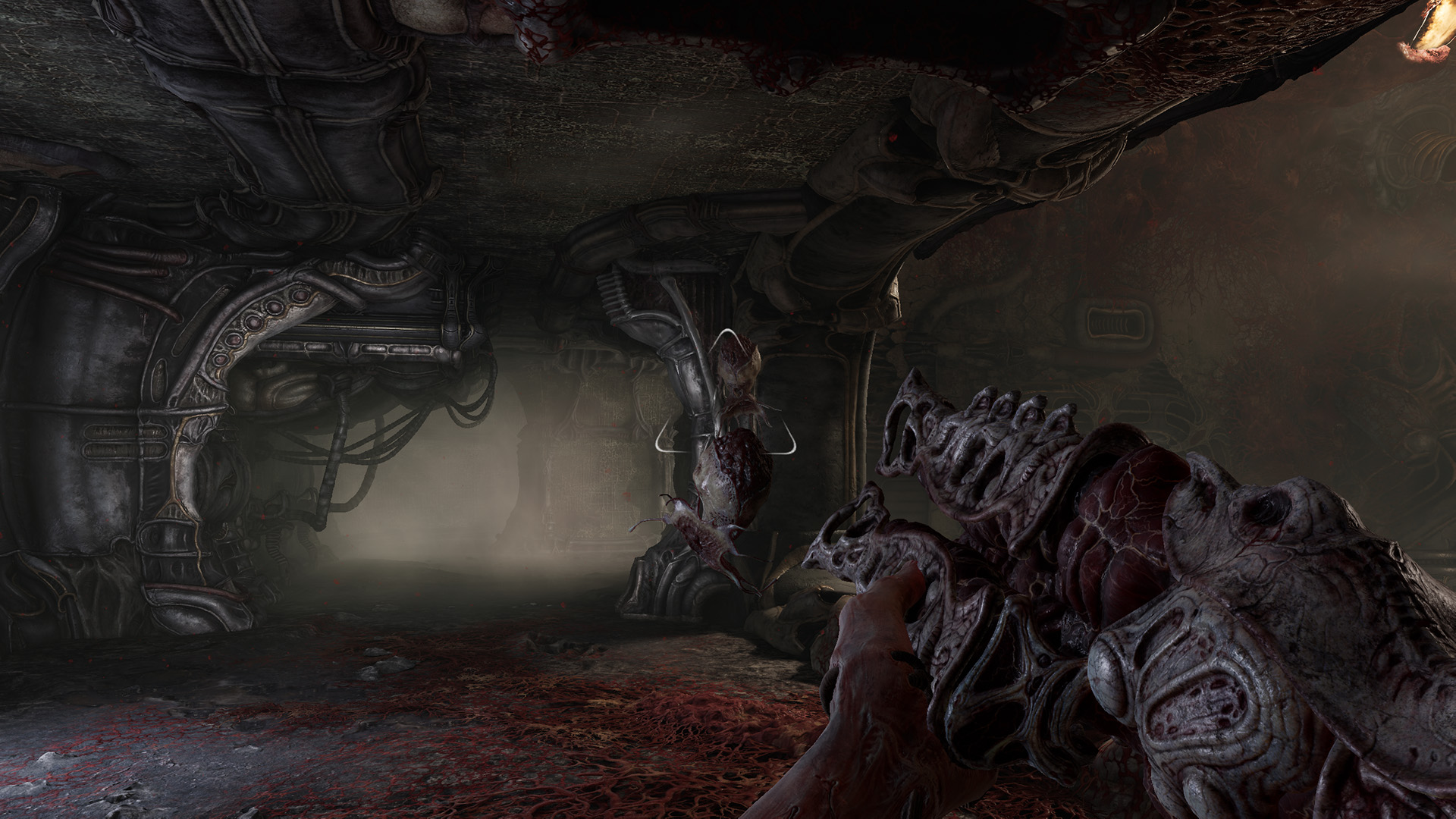 Violence is not just reserved for your puzzle-based interactions, as you’ll be shooting at creatures that see you as an outsider to their plight. Alien fetuses and chicken-like tumorous forms seek you out with projectiles that are aimed with utmost precision. Your ammo is limited, which is fitting for the genre, but if you’re not completely accurate with your return fire, you’ll find yourself needing to attack these enemies with a melee-only tool that puts you directly in harm’s way in order to pass.

These encounters feel very much like an uphill battle, and if there was anything horrific in having to dispense with these foes, it would be the difficulty of having to do so where every shot counts. If you do meet your demise, your guess is about as good as where you will end up, as the game doesn’t allow for saved games and you revert back to saved points after solving certain puzzles or entering specific areas. While this does feel quite unfair, it does put additional weight on your accuracy and I felt flustered more often than not during these combat encounters. 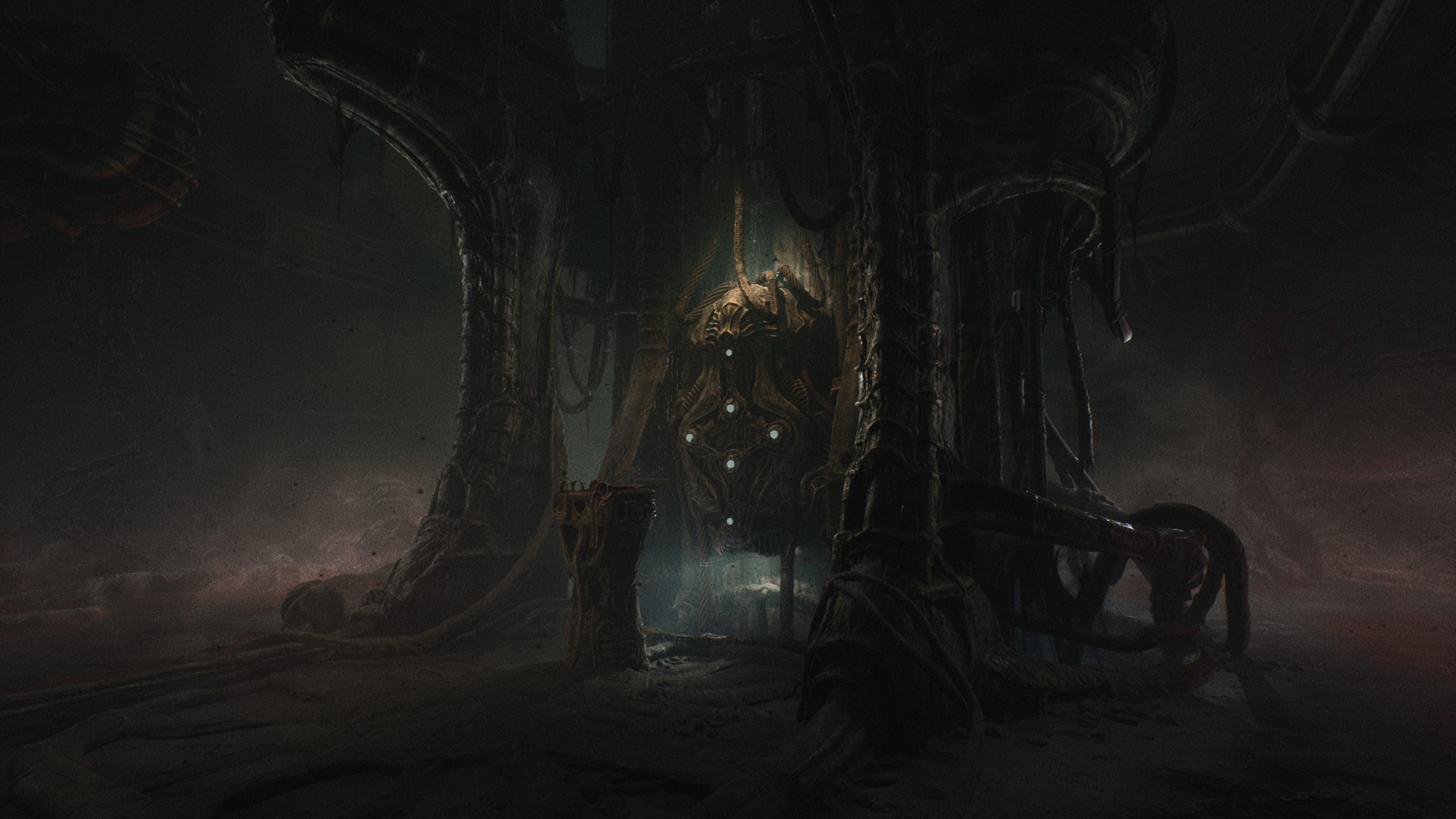 Puzzles throughout the game are really the star of the show, and I feel like the game has been improperly advertised to be a shooter, which it absolutely is not. The modules and kiosks built of bone and sinew that fit so perfectly within the world are the key roles that would typically be reserved for a character or plotline, but here you have an interactive world that serves as the plot device to your escape. Every key to each lock has a vulgar, bespoke purpose and the interactions of flesh and bone really nail that symbiosis that permeates the game through that theme. Some puzzles require direct manipulation of their devices, rotating appendages that lock in joints to light up some kind of eye or orifice, and the creepy nature of it all is a further testament to the overall feeling of playing this game: dread. The hopelessness of a nearly abandoned world full of flesh that serves as a means to activate devices is just a deep-seated psychological terror that should chill any player to the bone.

By the time you’re wrapping up the game, you’ll find yourself with the first piece of the actual narrative, albeit unspoken, and it almost feels alien in its delivery. It leaves the player with more questions than answers, but I guess that’s mostly what Scorn is: a twisted take on society and the rules of hierarchy that leave us asking why. It’s pure art in its simplification, but you can’t deny some similarities to our overall society and its own odd rules and procedures that from an outsider would be seen as completely alien in origin. 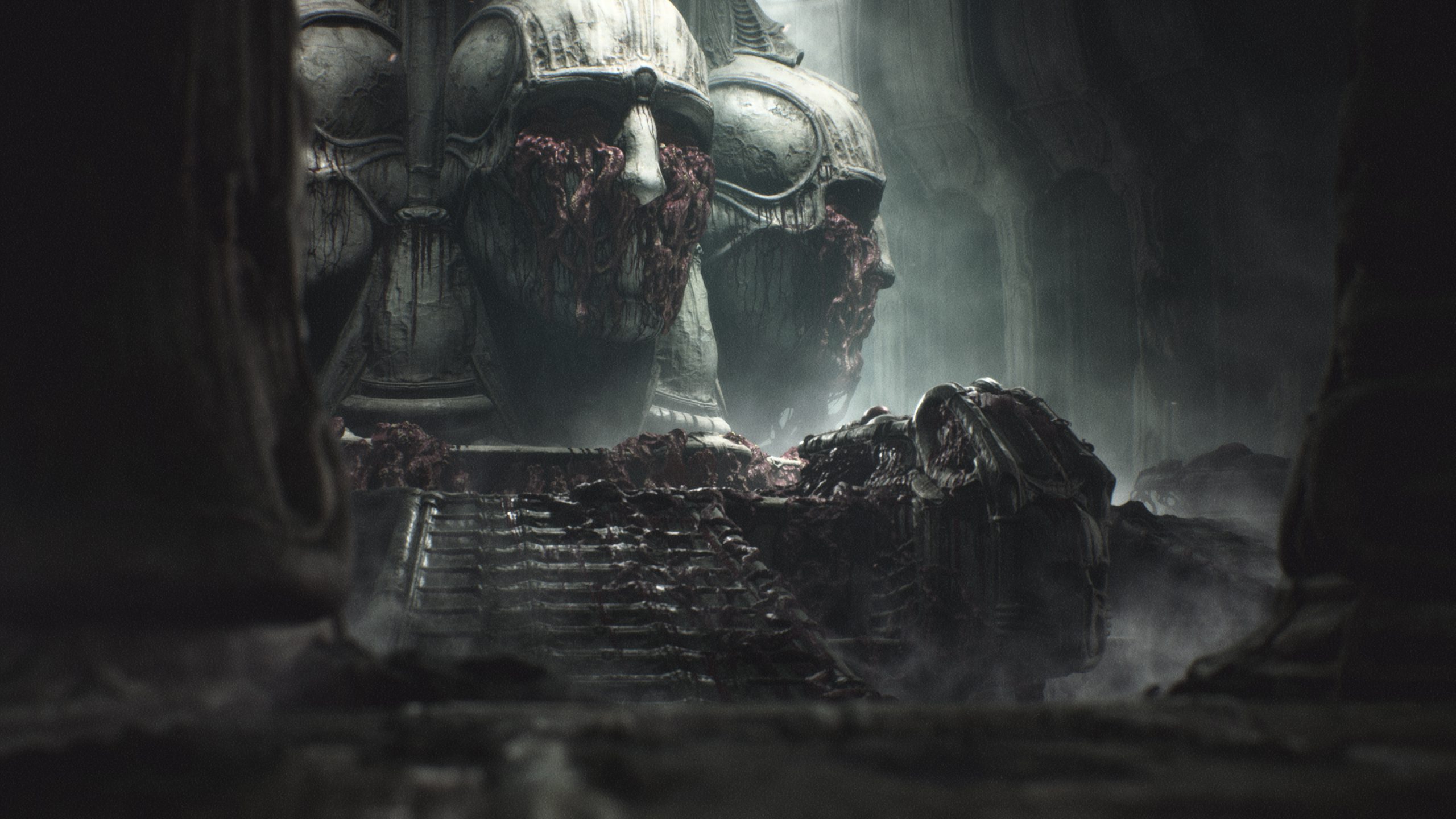 I enjoyed Scorn, but I can’t wholly be able to suggest that all players will. It’s tedious and maddening at times, and if you’re in it for the shooting elements, you might as well look elsewhere. However, if you’re looking for an artistic experience that puts you inside a Rube Goldberg machine made of body horror and violent acts and allows you to see an experience that defies explanation, Scorn is absolutely worth checking out, if only for the spectacle of it all. It’s a beautiful world full of horror, but it’s like being able to move through an H.R. Giger painting, and to me, that’s more than worth the price of admission.

Scorn is now available on Xbox Game Pass and PC.

Top 5 Things You Need to Know About Vampire Survivors

Spellbound: The Magic Within – An Enchanting, Yet Rocky Romp