Games are very good at eliciting emotions from players because of the way we interact with them, but Say No! More manages to not only deliver important, heartfelt messages about how we interact with others, but it’s clever enough to make you laugh as it does it.

Comedy writing is pretty hard. Comedy itself either works on randomness or relatively, and both of those things are hard to deliver when you’re not there in person with people. Comedy in other forms of media have been a whole thing for a while now, but it rarely hits well in games because of the freedom that is inherent to games. Say No! More is definitely a comedy game, it’s probably the first thing that people would say about it when describing it, and the fact that the developers have managed to make a fun, heart-warming, funny game is a testament to the great writing of the developers.

Say No! More has an incredibly simple premise. You have just landed an intern role at a new job, starting on the bottom rung of a company that you know nothing about, and your character has a problem speaking up to people. The latter is quickly hammered in, with your housemate and friend clearly taking advantage of that by immediately asking if you’d be willing to cover the entire rent. They give you a lunchbox, which ends up being taken from you continually as you finally start learning how to speak up to people, and the power of – and different ways of – saying no. Of course, the journey isn’t just for the character, it’s a really nice, couple-of-hours long game that discusses workplace and social dynamics in an approachable, entertaining manner.

The controls are as simple as can be, with movement completely handled by the game. It’s entirely on-the-rails, with the spacebar being used to say no, the cursor keys to ‘recharge’ through laughing, nodding or more, and numpad 1-4 allowing you to shift between different forms of delivery. However, there’s no real difficulty or puzzle element to the game, it’s simply a case of saying No to those who block your way, saying a big no at other times (sometimes just for comedic effect) and sometimes not saying no, because there are people who aren’t really in your way, who just want some of your time. There are some really fun moments hidden in the game through these not-saying-no moments, including playing a game, passing love letters or engaging in staring contests. 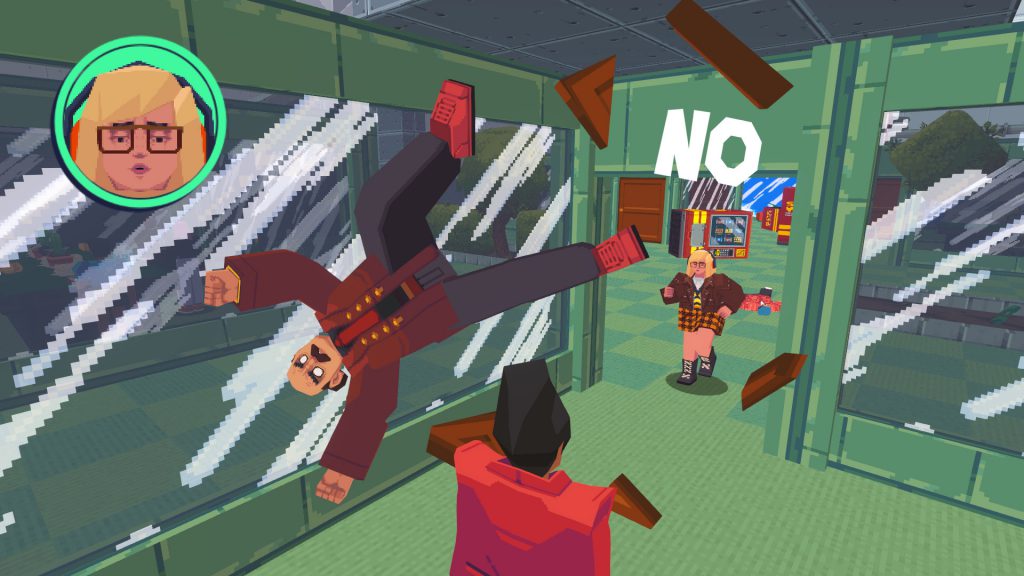 Humanity and heartfelt notes keep popping out throughout Say No! More, which is something that I didn’t really expect from Say No! More. Trailers had done a great job of depicting the parts of the game where you are walking through office corridors and knocking people away with your words. This was an incredibly fun approach but passed over the surprising character development. Within minutes I was already recognising characters, and by the midway point I felt like the game was about to end, but that I knew around a dozen unnamed characters from the game… then it kept going, and while it came in at around 90 minutes of play, I didn’t even think to take a break from it, and I wanted more at the end.

Say No! More is available now on iOS, Nintendo Switch, PC and Mac.