When Crusader Kings III launched back in August 2020 it launched more feature-complete than I had originally expected. Crusader Kings II had been an experiment in expansion-pack led, live-product redesign for Paradox… in fact, it was a case of The Ship of Theseus, where almost every area of the original game had seen so many overhauls that a Day One player wouldn’t recognise the initial product — it was so different. As such, I had middling expectations for Crusader Kings III. The visuals were bound to be vastly better, and a lot of the mechanics and designs were bound to be refined, but it felt incredibly obvious that a mass of content was going to be stripped out of the frankly bloated Crusader Kings II for launch. I was happily wrong, I’ve only booted CKII about four times since III launched, and a couple of those were simply for comparison’s sake. But, some things were definitely missing, and Crusader Kings III: Royal Court is the start of filling in (and expanding beyond) those gaps.

One of the biggest things that didn’t make it through from CKII was the court and the extra roles for courtiers, another was the artefact system. Both of these have been addressed with the new Royal Court DLC. It adds in 21 roles that can be granted to courtiers, these range from bodyguard through to court jester as well as adding in roles that specifically tie into a lot of the new mechanics. Each of these roles have modifiers attached to them. For example, with Bodyguards they decrease the success chance of plots against you, assuming they’re not involved in them, meanwhile, Antiquarians slow down the decline of your items and artefacts. All of these roles have a salary though, in fact, if I had to say that there’s one area of Crusader Kings III that’s massively been shaken up by Royal Court, it’s money. 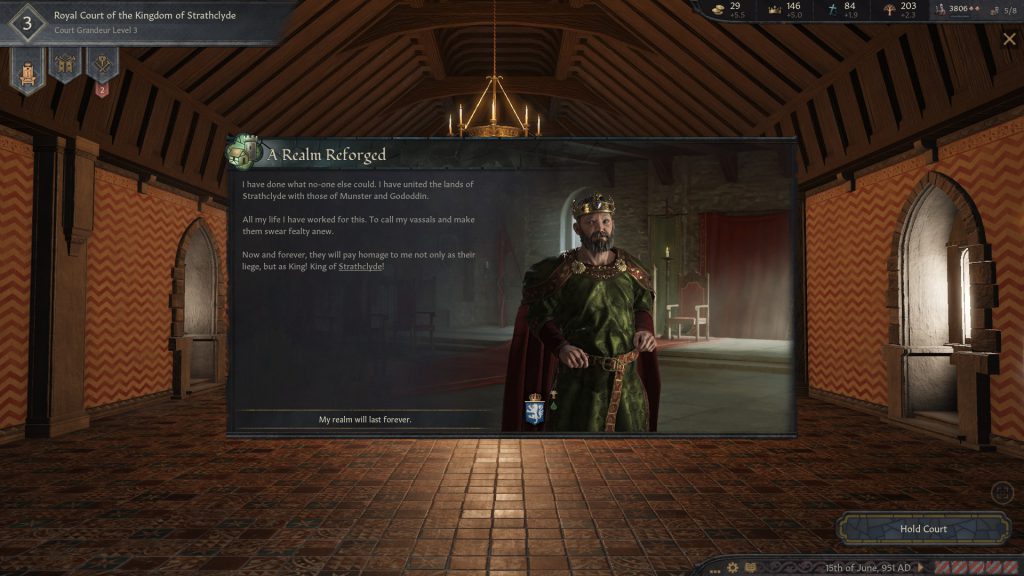 Each courtier role, each level of court, and each Artifact — either placed in court, or equipped on you — add modifiers, and while each of them costs, a lot of them can quickly avalanche together and double-or-more any of your areas of speciality. Combine this with the fact that you can flick your spouse over to simply boosting your stewardship, and rulers under you essentially share their own benefits through boosting your leader’s stats… well, let’s just say that Stewardship as a main trait actually becomes one of the most important of the statistics at play. In fact, in my latest, 22-character run I was about 60% Stewardship focused throughout, and spent a lot of time bringing appropriate guardians and courtiers in to keep my future player characters well aligned to that playstyle.

I mentioned the level of your court. That’s all tied to the Throne Room mechanics. It’s an area that you can visit, take (five-yearly) a series of decisions, decorate with artefacts, specify your court culture and splendour levels, and more. You can also see characters standing around and mingling; your spymaster might be looming around in the background, a flamboyant and generous courtier might be entertaining some of your guests ahead of the throne, and much much more. It all adds a lot more personality to the game, and makes player-to-player and region-to-region experiences feel varied. Once again, most of this costs a lot, but by levelling up the grandeur of your court you unlock a string of perks that can really change the game. 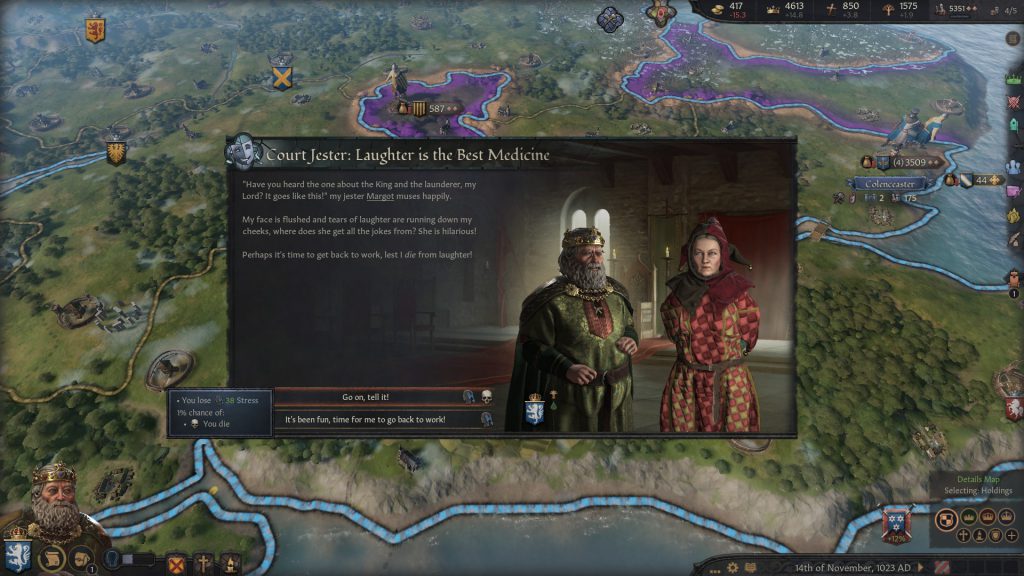 While the court grandeur effects, and the new roles, take away your gold at a constant, predictable rate. The artefacts system is as quick to slurp it away as the pilgrimage/Hajj trips will. You have a chance to fund inspired courtiers and visitors, as well as take a decision to have something manufactured… You can also steal items that you have a claim on, or declare wars based on these claims. Most of these events are sequences, and the vast majority of those are five or more stages long, with the opportunity to change creator, cut-corners, or feed more money into the project. This is an incredibly easy to way spend your way through your treasury, especially in an early game stage. Your player can equip a lot of items, ranging from weapons to crowns and regalia… that and there are around a dozen spots for artefacts and banners in your court… it’s very expensive to fill out all of these slots, and sometimes you’ll pay to have an object created and there’s a chance that it’ll simply not have the right set of perks on it for your current character.  Add to that the fact that artefacts and items waste away – even if under the watching gaze of a highly-skilled antiquarian – and you’ll find that you might be coughing up a lot of money for repairs, especially on masterwork items. 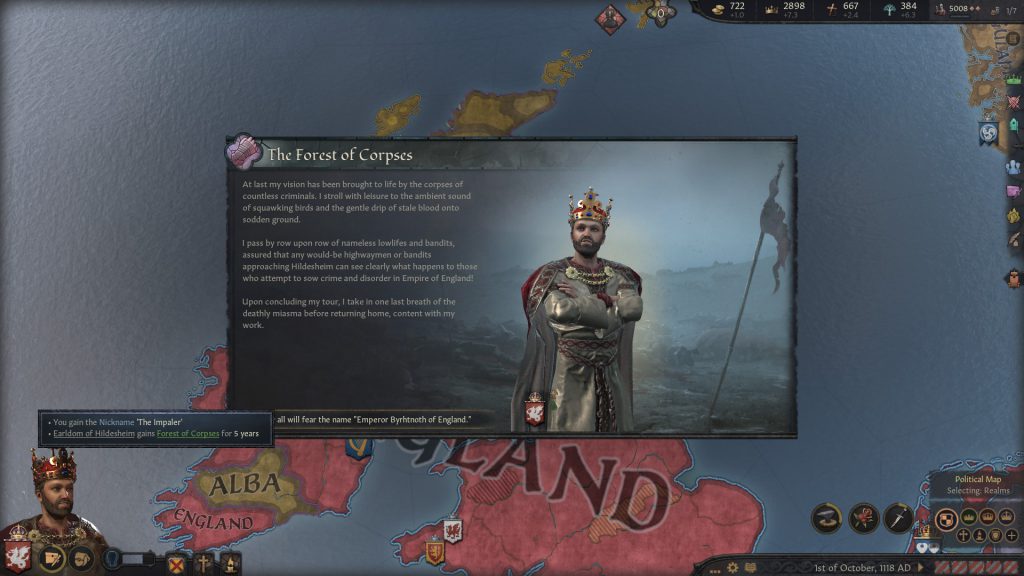 But, it is incredibly fun to send your Antiquarian around the world, and for them to come back with a region-specific artefact with weird and wonderful perks… the whole system really doubles-down on the classic CK chaos factor. Adding to that further are some pretty hefty changes to the culture system. The new culture system allows you to mix-and-match traditions up, fusing cultures, and creating a hybrid one… giving players (and AI) more control over the culture options in the same way that massive boons come from being the head of a house/dynasty or messing around with regions and cults. On that note, language also becomes important; your court language and native language can be different and you can become multi-lingual, which gives boons in the same way that shifting culture and religion does with your vassals and neighbours.

The elephant in the room is the pricing. Crusader Kings III: Royal Court comes in at about $30. That is, simply put, a lot of money for an expansion. As somebody who is likely to put thousands of hours into Crusader Kings III during its time as a live product I know that it’s worth it, but if you’re not sure then simply consider the fact that this is more than simply a mod or standard, small-fare expansion: It’s an overhaul to major elements like Culture, Wealth, Legacy and more, and that’s before we even talk about the inclusion of the Throne Room, which adds a major layer of immersivity alongside the avalanche of decisions and new playstyle options. Royal Court will, arguably, go down as one of the greatest expansions that Paradox has ever pulled off.