Flotilla is a theme-heavy eurogame from Wizkids, but does it sink or swim?

Although apparently in the minority, I used to consider Kevin Costner’s Waterworld one of my favourite films. I think what I liked about it was the unique take on the idea of a world ravaged by global warming and what that meant to the survivors — who in the main were being terrorised by a fantastic Dennis Hopper. One thing I never imagined was that thirty years later, I’d be playing a very heavy board game inspired by the same kind of theme — but here we are, and you know what, I think I like Flotilla even more than I used to like Waterworld.

Flotilla is the kind of heavy, thematic eurogame that you really can’t describe in detail in a written review for fear of putting your audience to sleep. As I learned it, and later taught it, I couldn’t help but think about how many fiddly little details there were, and I will admit that this review has taken me longer to write than I had hoped, mainly because I’ve struggled to build a consistent and reliable way to teach Flotilla.

Even so, it has been worth it every single time we’ve played. Potentially (but not always) a game of two metaphoric halves, Flotilla tells the story of a junkyard style city that has been built to house a number of survivors — the titular flotilla. Each of two to five players begins the game by attaching two sea hexes to the flotilla, then taking a hand of starting cards, a toxicity track, several skiffs (one of which goes on their starting tile) and a few others bits and bobs. 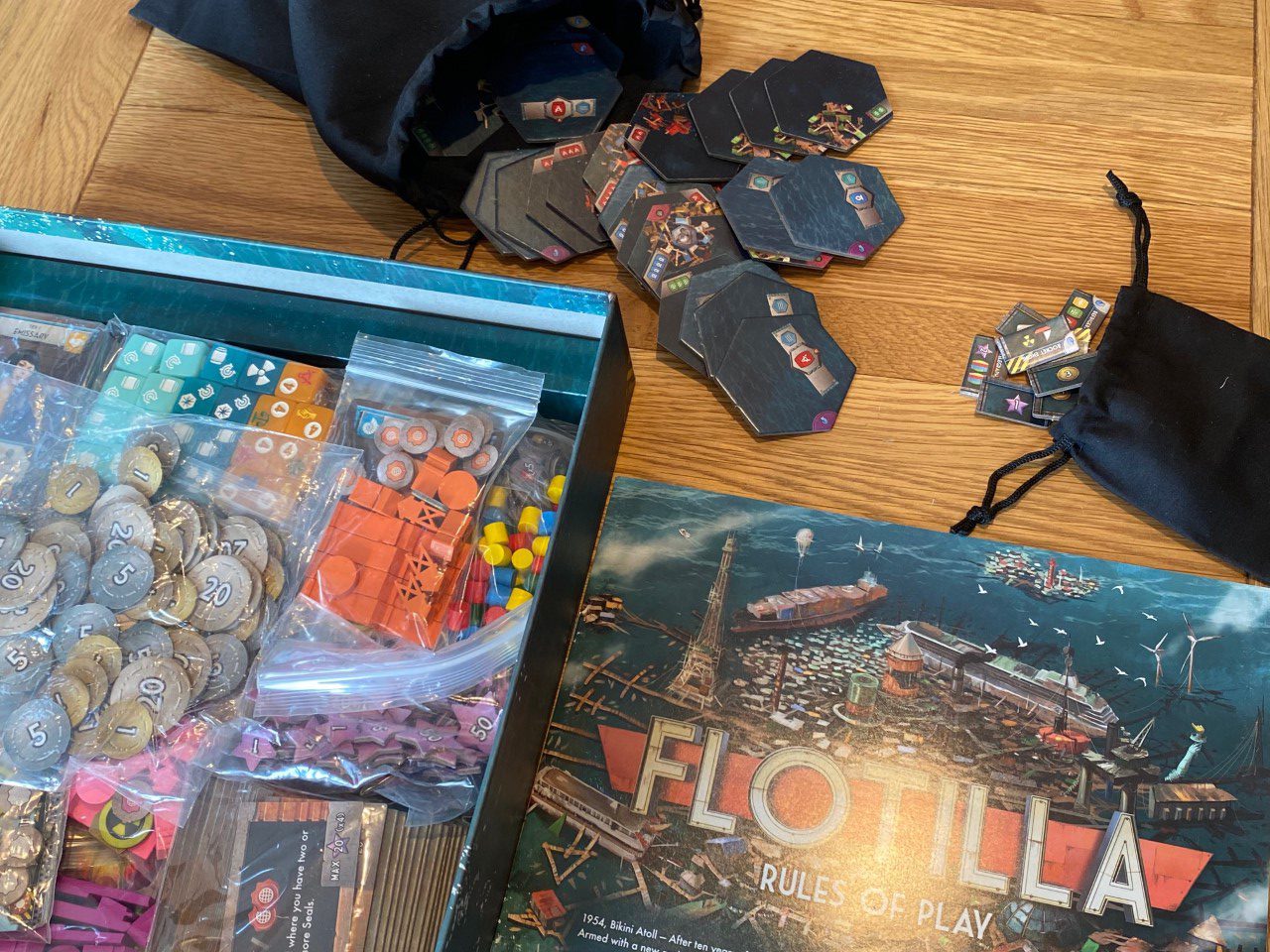 Players will immediately notice that all hexes are double-sided, as are the cards in their hand and their very own player board. This is because the players begin the game on what is called the “Diveside” but can later progress to the “Skyside”. When they make this change (which I’ll explain later) many of the rules and mechanics that govern the game for them change, as do the actions they can take. Thematically, being Diveside is largely about exploring the sea and gaining resources, whilst being Skyside is about spending money and resources to increase the size of the flotilla.

In terms of their turn, all a player has to do is decide what card they want to play — and then take the printed action(s.) All starting hands (and everything besides the starting tile and resources) are the same, and the players begin by choosing from their Delver, Scholar, Speaker, Founder, Trader or Captain. Each does something slightly different, with the Delver, Speak, Founder and Trader all belonging to specific factions that include more advanced cards which can be drawn later — more on that in a bit. 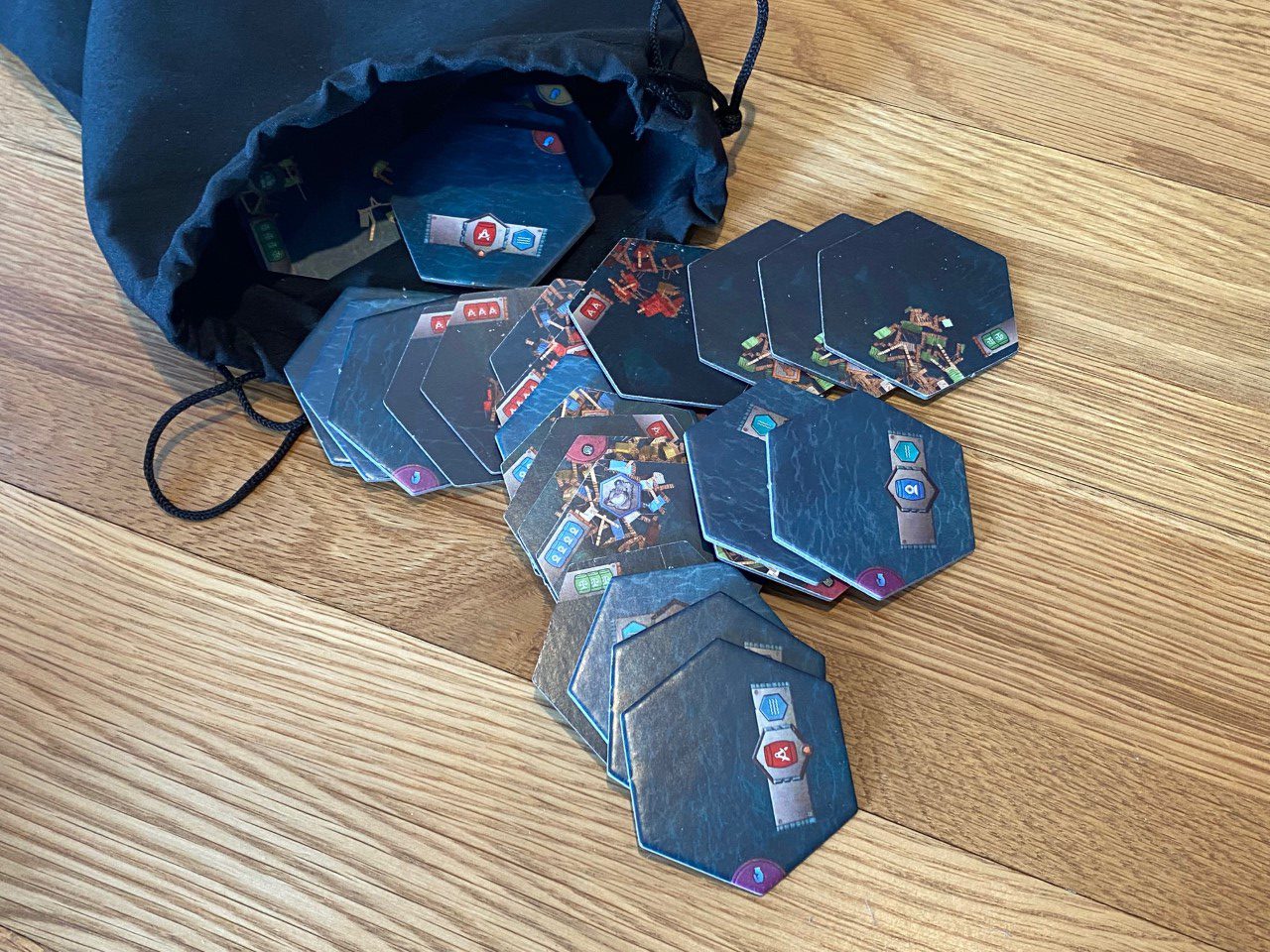 The Captain and the Scholar are unique because the Captain allows the player to pick up all of the cards that they have used so far (gaining one coin for each) and effectively resets their hand, whilst the Scholar allows a player to copy the top card of any other players discard (assuming they are on the same level; Diveside or Skyside). The other cards allow players to draw and place sea hexes (Founder), dive and bring up resources by rolling dice (Delver), add influence to the four factions (Speaker) and buy and sell goods, skiffs or outposts (Trader).

After this relatively simple concept is announced, we have to dive — literally and thematically — into some detail. Flotilla is a game about scoring the most points, and the numbers are pretty massive. The game is actually seeded at setup based on how many players there are, and when someone takes the last of the points set aside (four hundred, for example, in a four-player game) then all players finish the current round of turns and then play one more round. Thankfully, a stash of additional points means that there is no cap, it’s just that the points threshold is what triggers the beginning of the end. 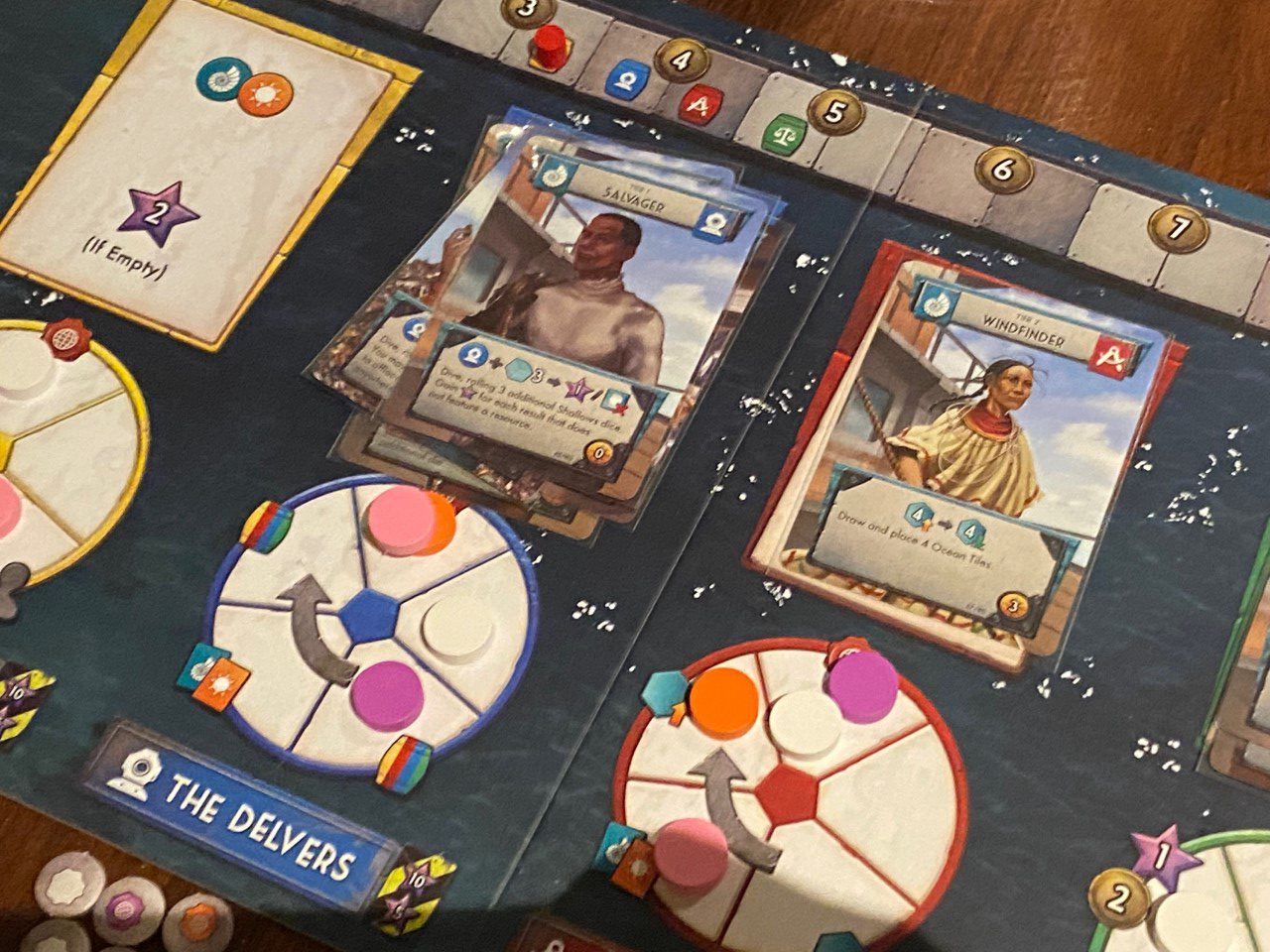 Points are scored for many, many things. Most notably, they come from completing missions that are randomly chosen during setup. There may be as many as four of these associated with the Diveside (for things like placing deep water tiles, building outposts or exploring toxic waters) and the same for the Skyside (for building sections of the flotilla in a certain colour or indeed varying the colours used). The thing is, a player can’t score these missions unless they can build an outpost (via a Trade action) which is expensive and restricted to certain tiles.

Points can also be scored for bringing up relics (by matching three symbols in the corner of ocean tiles), by advancing your position on one of the four guild tracks, by delving in the water and rolling dice that match the sonar position (when it is in a points-scoring position) or by rescuing survivors. Several of the guild cards (taken via a symbol on each track, or via a few other niche methods) also provide points directly, as does building out the flotilla once you are Skyside. 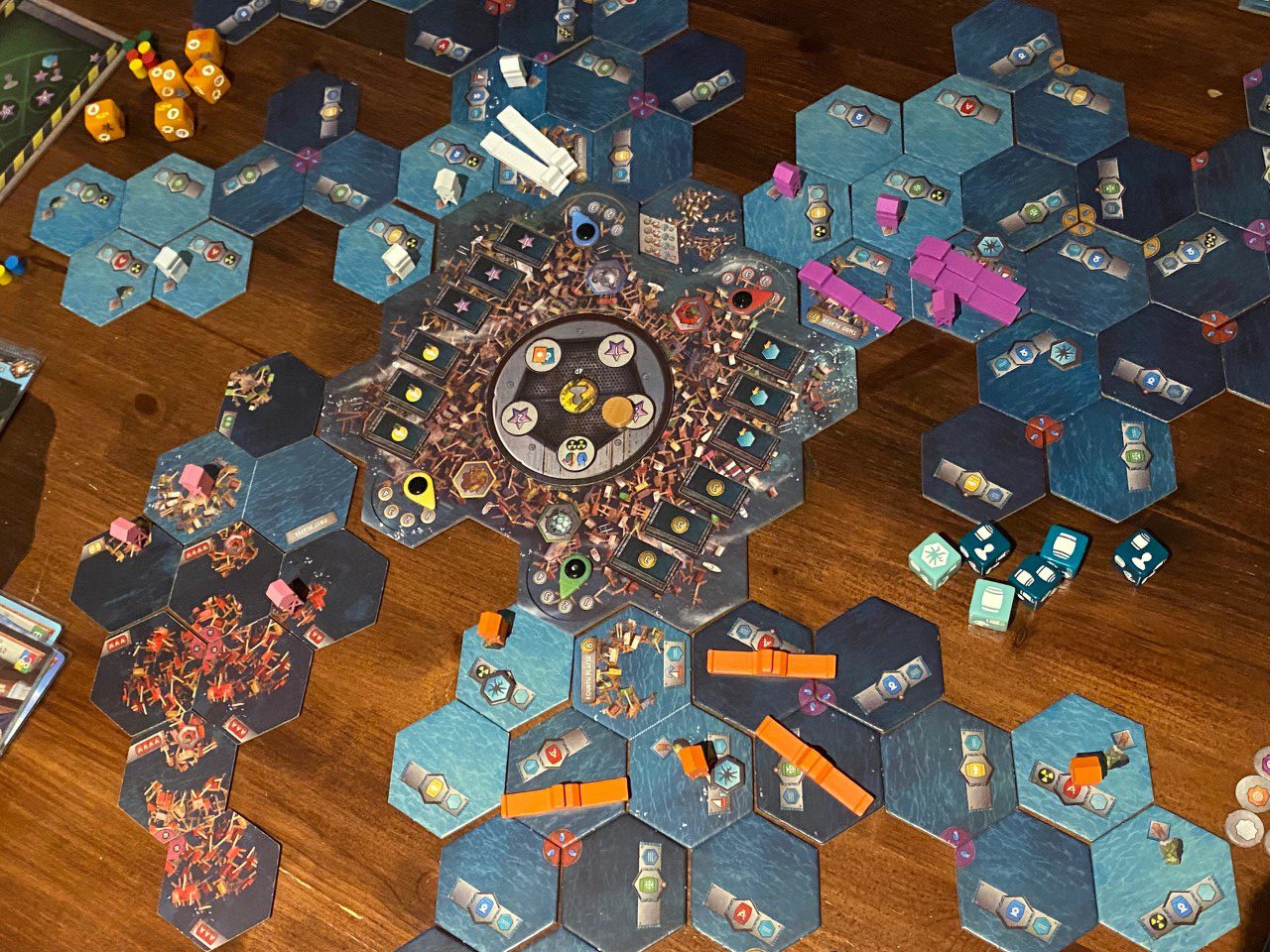 Having discussed the concepts of Skyside and Diveside a fair bit, you might think that some monumental trigger would force the change; but that’s not so in Flotilla. Instead, any player can switch to the Skyside at any time when their Captain card is played — even on the very first turn. This isn’t even a particularly bad move, and neither is it a bad strategy to avoid flipping to the Skyside at all — and I’ve seen players win whether they switch early, late or not at all.

When you do flip, a few things do change, though. For starters you pick up all your ocean tiles and take them back to your hand, discarding any outposts and the tiles on them — you will no longer score any Diveside missions (though you keep the points you scored earlier). Your cards all flip to the Skyside side and you won’t be able to play them Diveside anymore either. You also won’t delve into the sea to find resources and instead, you’ll roll research dice which do different things — including generating a lot of cash. 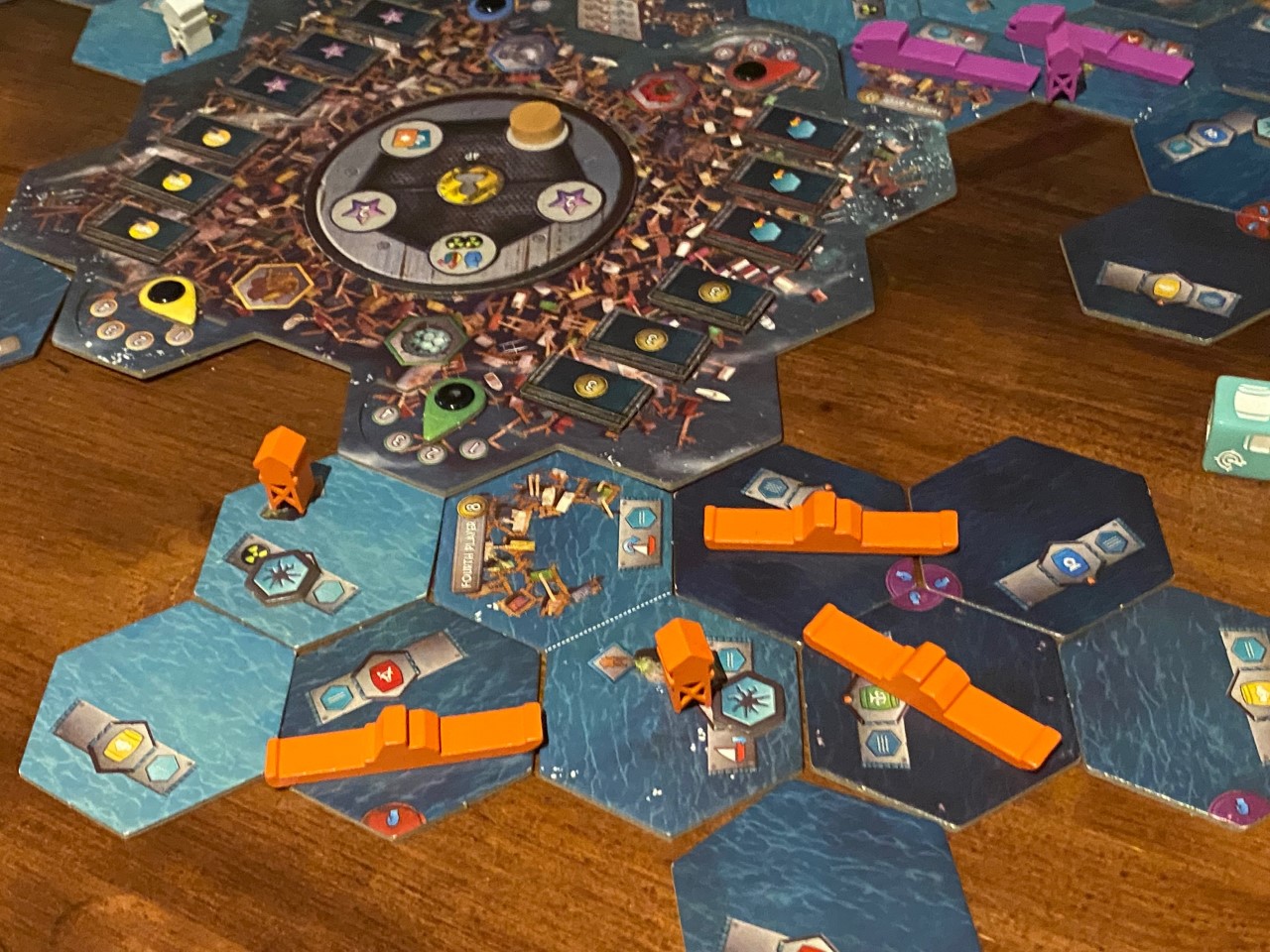 At this point, another interesting part of Flotilla is introduced — that of the interconnect between players above and below the surface. Simply put, whilst all players are Diveside, the goods market (containing barrels of four colours) will likely be flooded and therefore prices will be low. The more players go Skyside, the more the market will climb because those players need barrels to build the flotilla, but cannot easily produce them. With this said, some Diveside players may benefit financially from several Skyside players investing in barrels and shifting the market.

Other interactions between Skyside and Diveside are infrequent with some of the special cards thematically linking the two by offering bonuses to players sat beside a player who is on the “other” side. These neat little touches are icing on the cake rather than fundamental, and I like that because Flotilla is complex even before you introduce the new (similar) rules for Skyside, which do differ from those when you are Diveside. Weaving the two together with new mechanics and options would add unwanted complexity, I think. 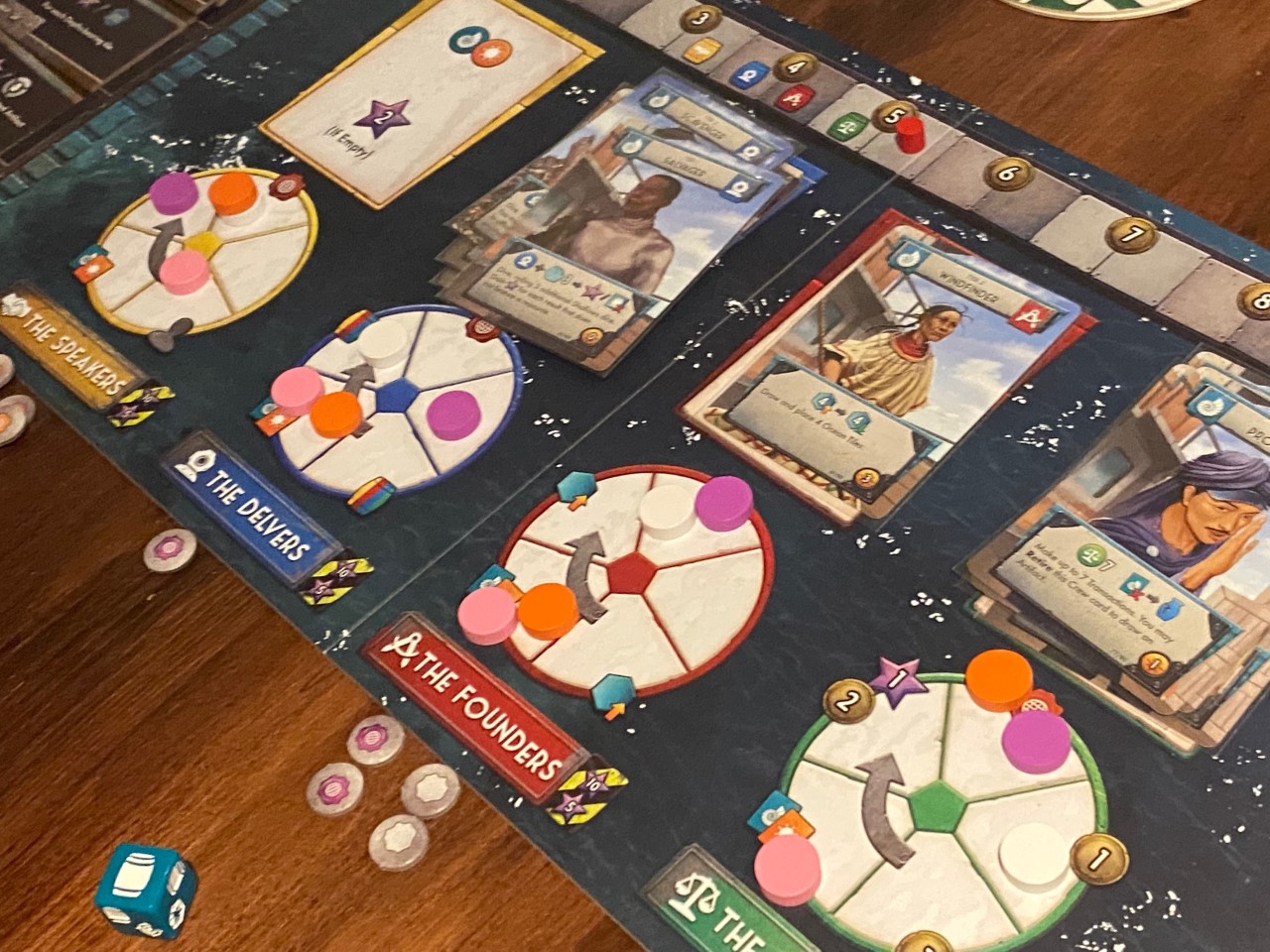 That said, Flotilla is a heavy, heavy game. BoardGameGeek currently suggests a weight of about 3.9 out of 5 and a playtime of 90 to 150 minutes — and I’d agree with both really. It works best at four players for sure, but three or five are also supported — the former of which is fine, the latter of which can become a bit stodgy and impractical due to the amount of table space it demands.

Personally though, I am not put off by the weight, and I really enjoy the freedom and range of options that Flotilla provides. There is good deckbuilding here, a spatial puzzle, elements of turn optimisation and hand management and even a bit of pick up and deliver as you bring home your barrels. All of these things are wrapped together in a theme that really works well with the mechanics to deliver a satisfying and super crunchy experience. 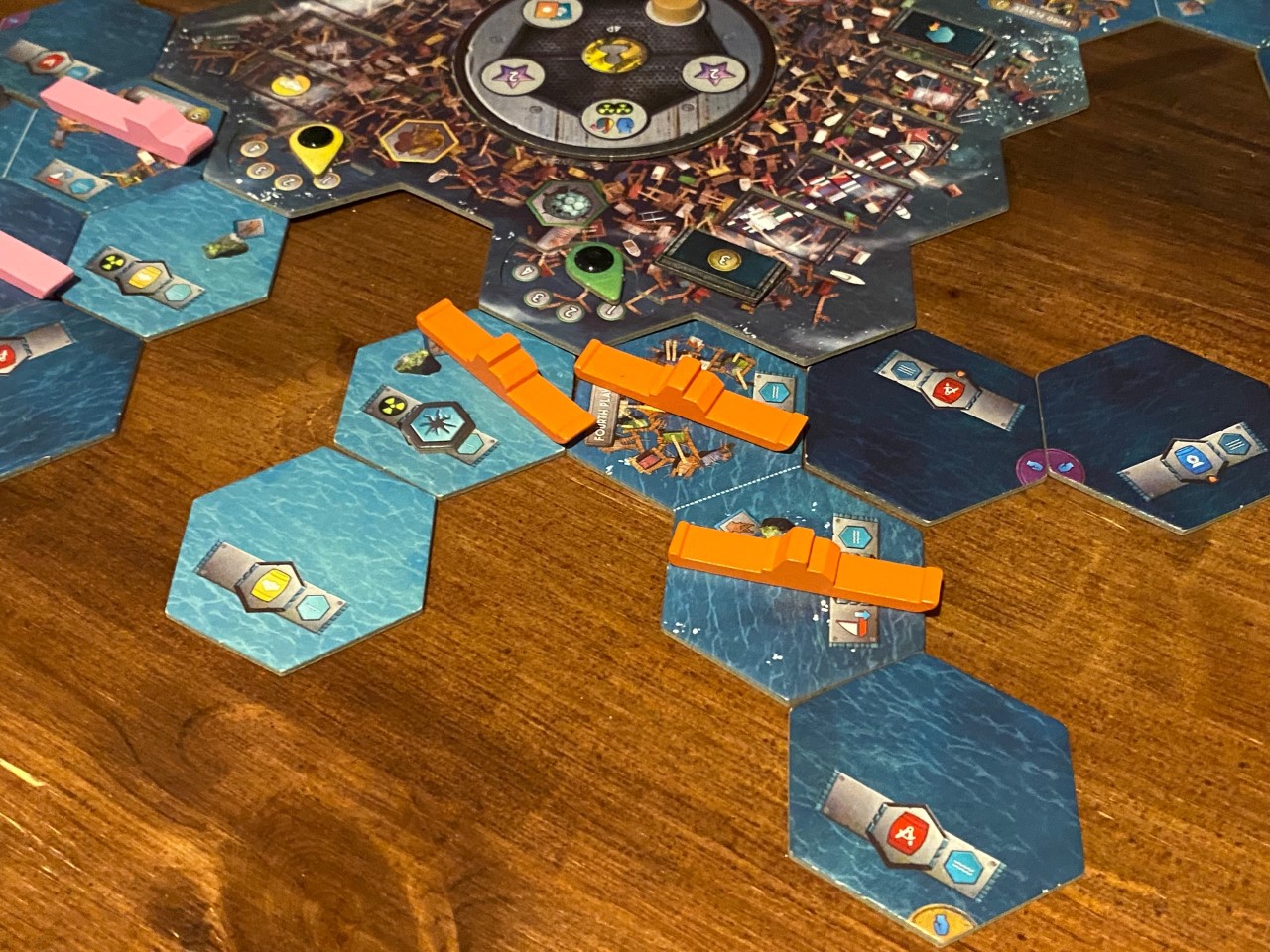 In my opinion, this is tough to do. Only truly excellent games mate so many mechanics together with a great theme and a relatively simple turn flow without becoming wildly unbalanced or broken — or worse still, dull. Flotilla isn’t for everyone, and it isn’t even a game I would want to play every week. It consumes an entire evening at a time and it has a high barrier for entry, but if you like a very thick, chewy eurogame with thematic overtones, I think there are few better choices.

You can get Flotilla from Amazon.