Rigid Force Redux plays like a traditional horizontal side-scrolling shmup and may seem like a game that you’ve already played, but it also offers a unique pod-placement system that gives a fresh face to the classic genre.

If you’re looking for an amazingly thought-provoking storyline, you won’t find it in Rigid Force Redux. That’s not to say that there are many great storylines in the history of shmups, but this game sticks to the ‘action says more’ trope. You have a support AI named PSYE that helps your ship locate and target a bevy of monstrous machinations that are using the same CORE system that powers your ship, and work your way through levels to eventually destroy them.

Luckily, the gameplay is solid and provides plenty of fun. Some new systems stray away from the R-type standards that Rigid Force Redux heavily borrows from, specifically the Force Shard mechanic. You start with a standard bullet-firing weapon, but you can later upgrade your primary and secondary weapons to become a force to be reckoned with, thanks to floating power-ups that fly out of defeated enemy ships. Once you get a Force Shard ‘pod’, however, you have your primary fire, but also some additional firepower that can be directed either forward or backward, allowing you to clear more of the screen and concentrate your fire on whatever is currently assaulting you. Pods are upgradeable up to four of them, and once you get all of them, any ship or creature in your way becomes cannon fodder in a matter of seconds.

Another system that makes your survival even easier is the use of energy orbs. Each defeated enemy drops green orbs that can be collected by flying over them or pulling them in with a special ability. Once your meter at the bottom of the screen is full, you can unleash a devastating special attack that rapid-fires your primary weapon in a barrage of bullets. Your energy carries over from stage to stage, which — if you can avoid needing to use it against a particularly difficult wave of enemies — will help you deliver the final blow to harder boss ships. 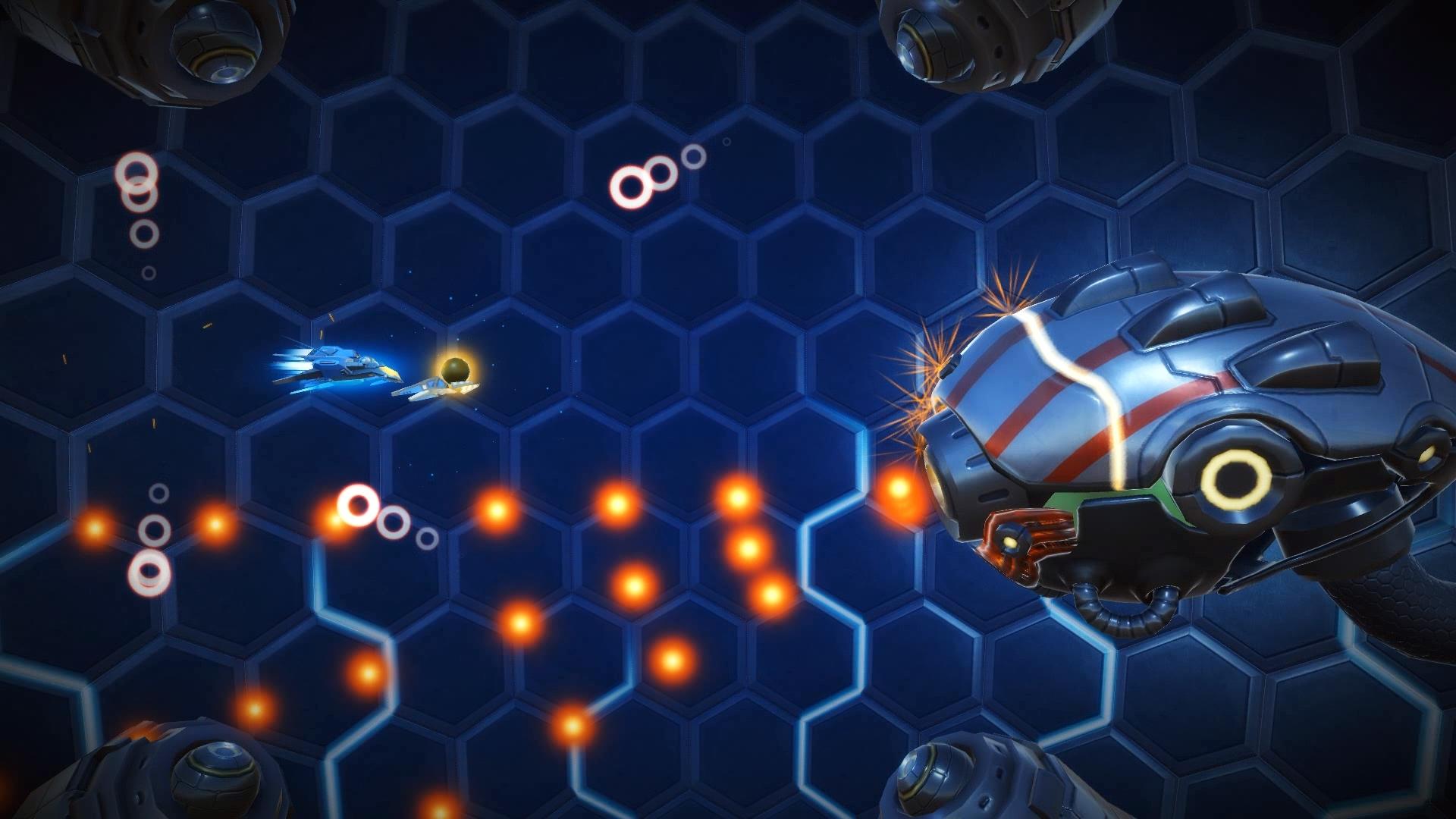 The graphics in Rigid Force Redux are pretty good for a shmup. All the models are in 3D, which has been done before but isn’t as common in the genre. The backgrounds each seem to tell their own unspoken story through motion — such as a space battle raging on behind the enemies you are facing — and keep the visuals busy but interesting to look at. The bullets, sadly, are the least visually appealing things, at least when it comes from the enemies, and can make an otherwise polished experience seem a bit dull. Besides that small caveat, there’s plenty of visuals to enjoy, however.

Each of the six stages feels unique, but there aren’t enough ‘aha!’ moments that set them apart. Occasional mini-boss fights change up the formula a bit, but typically can be finished in a short amount of time. Each stage has a cutscene with voice-over work from PSYE, but they seem to only try to push that story that doesn’t really deliver. Enemies are diverse enough to keep players from monotony, and there are some tight spots — due to environmental damage — that can get tense in some of the more cavernous levels. It’s certainly not a long romp, but there are additional modes in this remake that help extend playability. 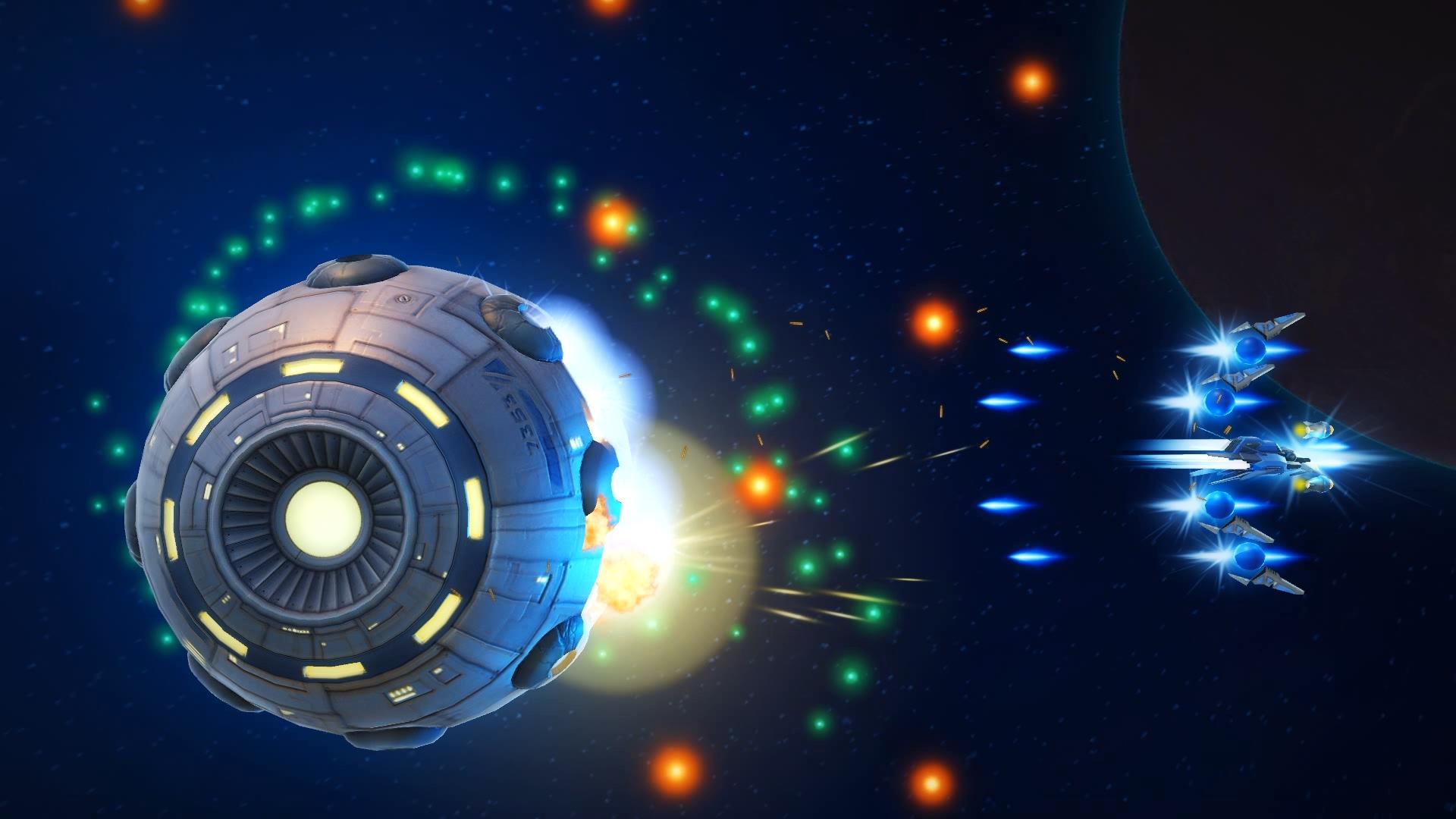 There’s the typical Campaign mode that takes you through the main story, but there’s also an Arcade and Boss mode that ups the challenge. While Boss mode is self-explanatory in that you face the Bosses in order, the Arcade mode provides additional tasks within each stage. You can be tasked with achieving a high score or forced to defeat a certain type of enemy. It’s nothing spectacular, but it is there for players looking to extend their experience.

Rigid Force Redux gives an update to the original game with some additional modes and manages to find an extension to the otherwise short campaign. The synthwave soundtrack fits perfectly with the mostly mechanical enemies and fast-paced bullet ballet and adds additional energy to the manic gameplay. If you’re not a fan of shmups Rigid Force Redux won’t change your mind, but for fans of the genre, this is an excellent addition to your library.

Rigid Force Redux is available now for Xbox One and the Nintendo Switch.