Imagine navigating the bustling waterways of the mythical archipelago-city of Yamatai. The tight, twisting inlets teem with traditional, low sided boats with squat, colourful sails. As you steer your boat through the throng, you see men unloading materials at every dock; from stacks of bamboo at one to piles of clay bricks and lumber at another. All around you, buildings of every kind rise from the shoreline in honour of the Holy Queen Himiko. You see, all of this is for her, and now you realise your purpose here – to build the finest series of structures that Yamatai has ever seen and in turn, win Queen Himiko’s favour.

In Yamatai, two to four players compete with each other to build the most impressive empire of cash, buildings and specialists, with the intention of amassing the greatest number of Prestige Points. Whilst Yamatai is heavier than some Days of Wonder games, it is nonetheless quite straightforward to setup and play, and it features an incredibly beautiful set of components, which are colourful, well made and plentiful. The box is well organised (but not quite as structured as Quadropolis) and the manual is brief and laid out in a logical manner, although I struggled for a while with the amount of information crammed onto every page. Examples make things easier to manage, and every player receives a card with a turn summary on it that is useful, if a bit chaotic at first glance. 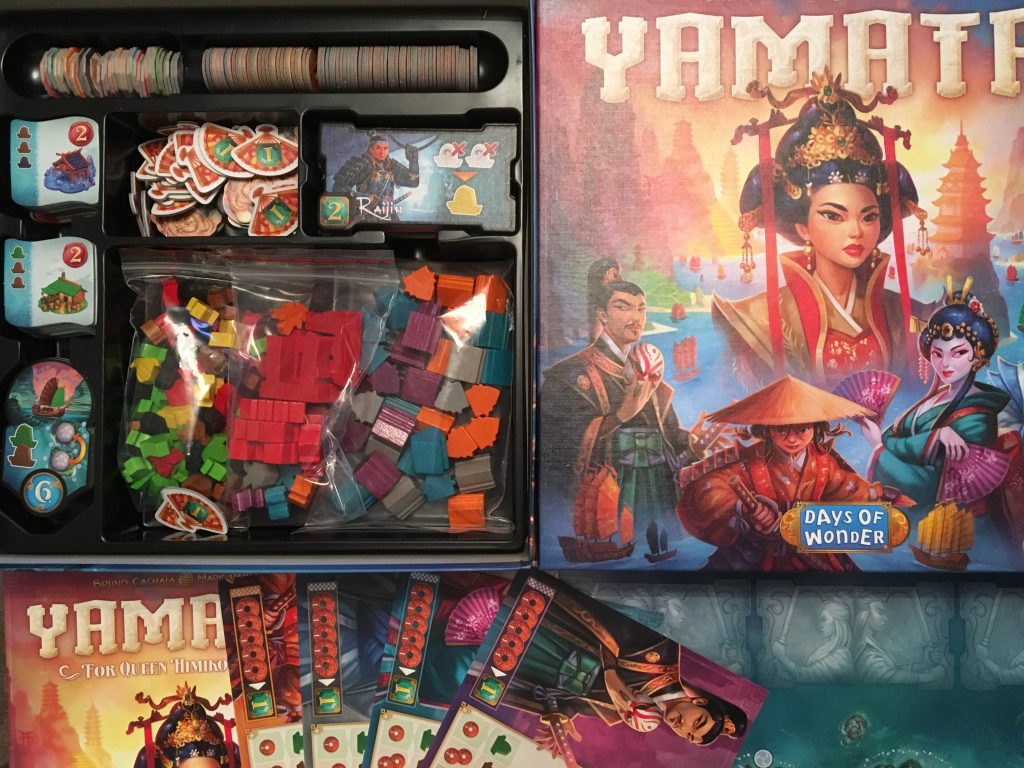 Each turn begins with the first player drawing a fleet tile from the selection of five face up fleets at the bottom of the board. Each fleet provides players with one or more coloured ships, and usually, enables a special action to be performed such as swapping two ships on the board, or constructing a building with one less ship than usual. With your ship (or ships) in hand, you may buy or sell one for the cost indicated on your player card (gold ships cannot be traded) and then you may place your ships on the board. All ships enter the Yamatai archipelago from the five indicated spaces on the left side of the board. Once a player has finished placement, he or she may then either claim a culture token from an island adjacent to one of them, or place a building onto an empty island if they have the right ships in hand to complete the build.

Available buildings are placed down the side of the board, and drawn from a face down stack when replenished, introducing an element of randomisation and forcing players to respond to an ever changing situation. Once all of the starting spaces are taken, players will need to match the colour of the previous ship in the chain before placing a new one, although when adding a second or third ship, the same player may add ships of any colour. In the event that a player has excess boats after placement, he or she may place one in reserve on the player board, but any excess ships beyond this must be scrapped, at a cost of one Prestige Point per pair at the end of the game. 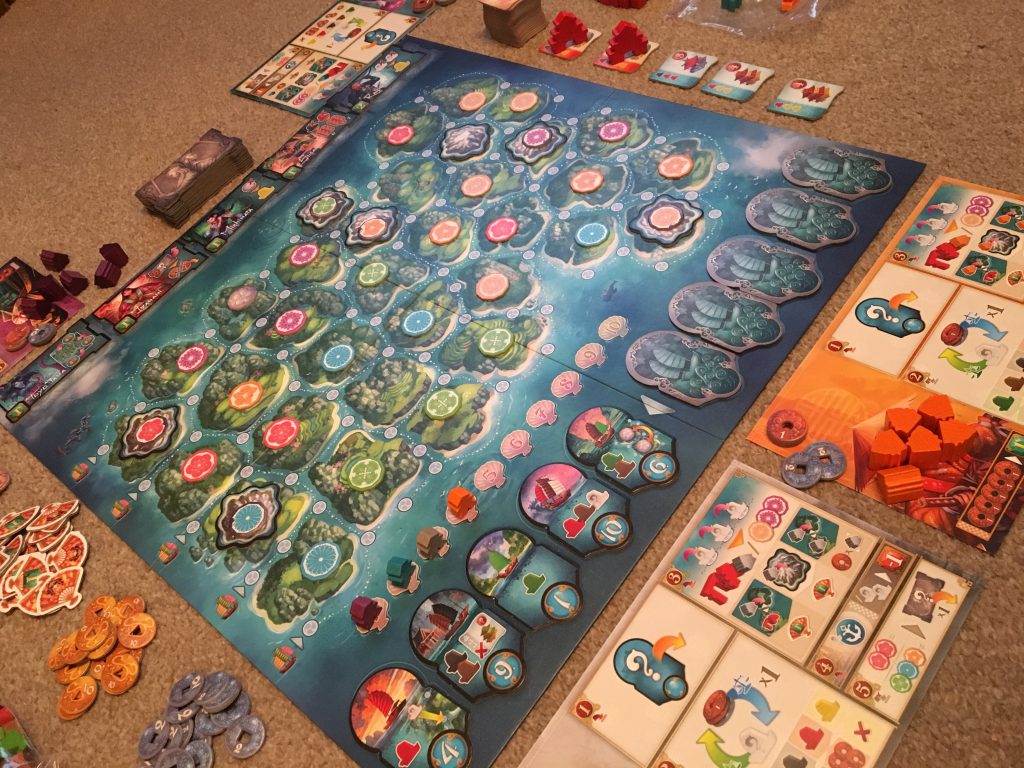 Placing buildings is the main key to winning and as each structure is completed, the building token is placed face down next to the player card of the player who built it. There are monetary bonuses associated with completing buildings on adjacent islands or on mountains, as well as Prestige Point bonuses for building them next to one of the Palace or Torii prestige buildings, as long as the prestige building was constructed before the regular building. Trading Posts add an additional financial benefit over and above the normal grouping bonus.

As the final act of their turn, players may purchase one of the Specialist cards from the five face up at the top of the board. Each one costs either two identical culture tokens, or three unmatched tokens, and each Specialist grants Prestige Points at the end of the game, plus a unique ability during future turns. Specialists are rarely game breaking in power level, but they do allow players to focus their efforts on a particular area. For example Toyo Tama allows players to introduce boats on any side of the board, and if taken early, can give a player free reign over an entire swathe of the board. Michimata allows players to draw a gold boat in exchange for a culture token, whilst Nakatsu allows players to trade a gold boat for any two other boats, so creating engines with multiple Specialists is also possible. Banking on this strategy can be unreliable due to the randomised nature of the Specialists and the likelihood of opponents stopping your plans, so you’ll need to plan ahead carefully. 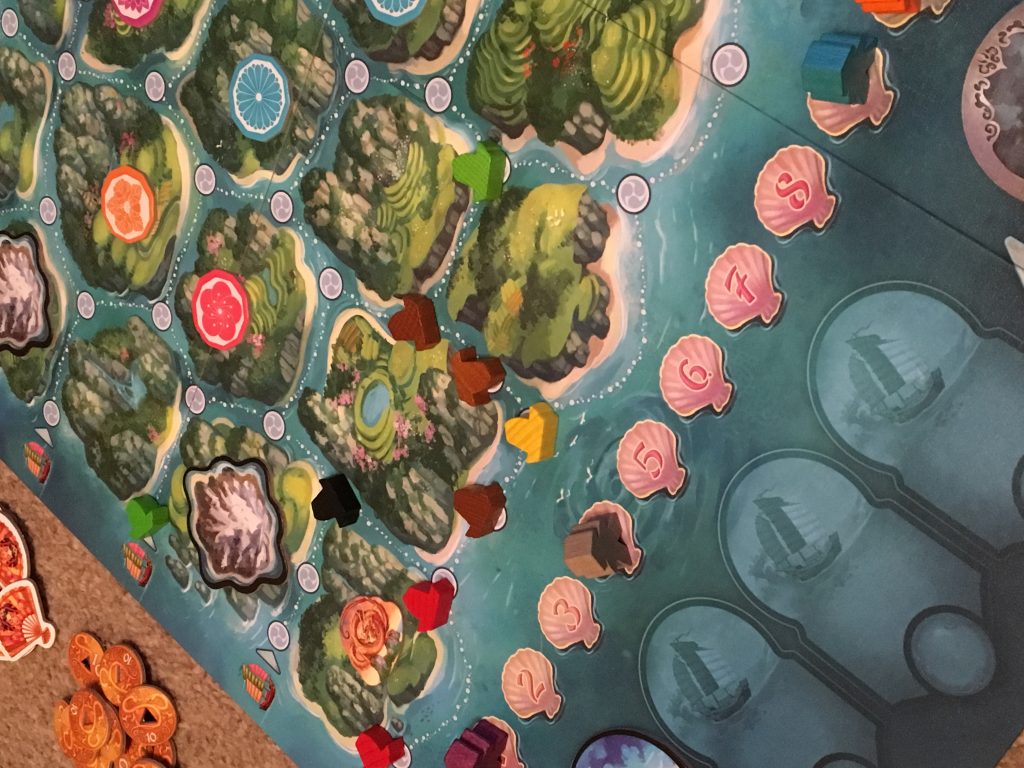 The most fun part of strategising in Yamatai happens as the result of the turn preparation mechanic. New buildings and Specialists are placed adjacent to the board only at this time, so as a round progresses, options become fewer and fewer. A player order track is used to determine what order players act in, and their placement on this track is determined by the fleet that they chose at the beginning of the next turn. More powerful fleets tend to force a later start in the next round, and in a four player game, it can be disastrous to take the last turn on more than one or two occasions. As there are ten fleet markers and only five face up, those that were unused are now moved down the track (including the one or more face up fleets that were not chosen last round) and the face down ones are turned over. Those used last round are randomised and placed face down at the end of the track

The game ends when one of the end-game conditions is met, such as a player running out of buildings, or when the stock of ships (of any single colour) is depleted. Scoring is achieved by adding up the total amount of Prestige Points amassed by each player. This total is the sum of the points on each completed building card, those on each Specialist, one for every prestige token drawn during the game and one for every five coins amassed. Players then lose one Prestige Point for each pair of scrapped ships and one for each building reserved as the result of a fleet action that was not actually built. 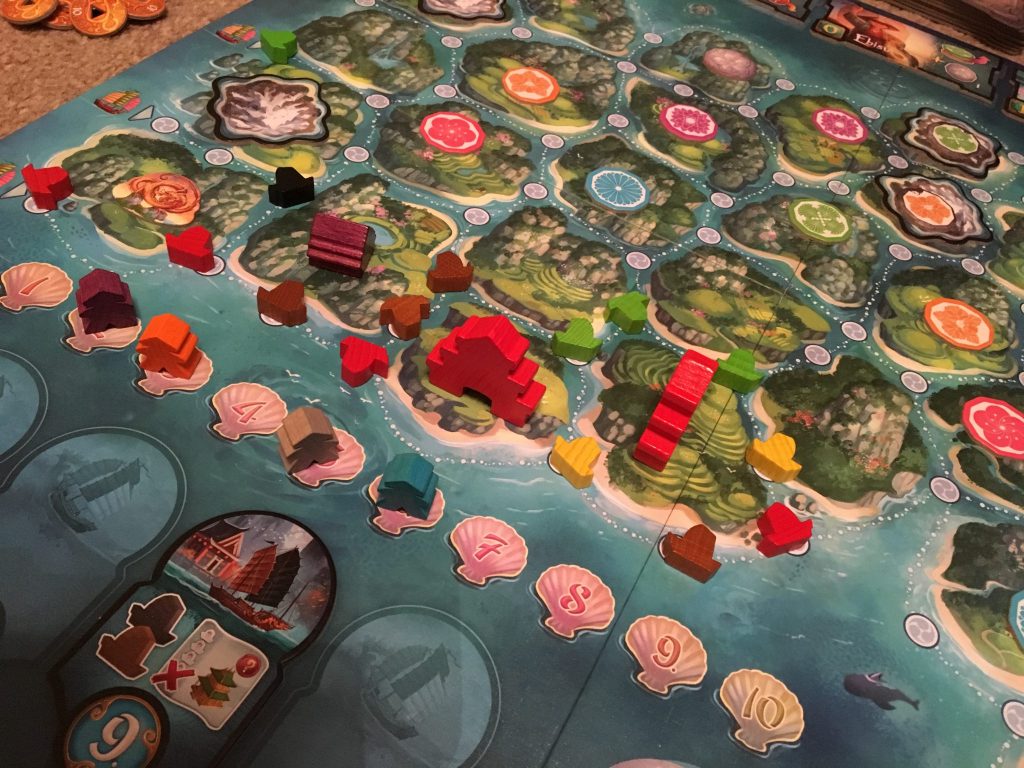 Having played quite a few games of Yamatai with all of the different player counts, I really enjoy the fact that it supports so many different strategies through manipulation of the fleet drafting and smart use of Specialists. The board state can change very rapidly, and it’s easy to be left behind (or have your buildings isolated) if you end up with an early turn in one round and a late one in the next. Placing a prestige building is a great way to get points, but it’s unlikely that you’ll be able to completely surround it with your own structures, so every time you do, you risk giving away a potential advantage.

It’s possible to win by creating an engine of Specialists that focus on earning coins by manipulating the trade mechanic, and it’s just as possible to use other Specialists to create a system where you can trade and save ships in such a way that you will almost never struggle to place them on the board. You can even win (broadly speaking) by simply targeting the Specialists with the highest Prestige Point values, or by always aiming to take usable fleets that maintain a relatively early place in the turn order and simply acting on every opportunity to build. The downside of all of these strategies is that it is very hard to be certain you are locking out opponents, and in fact, you simply can’t do so in any practical sense. There are lots of “take that” situations in Yamatai, but few of them are intentional or orchestrated, and there is no direct conflict. 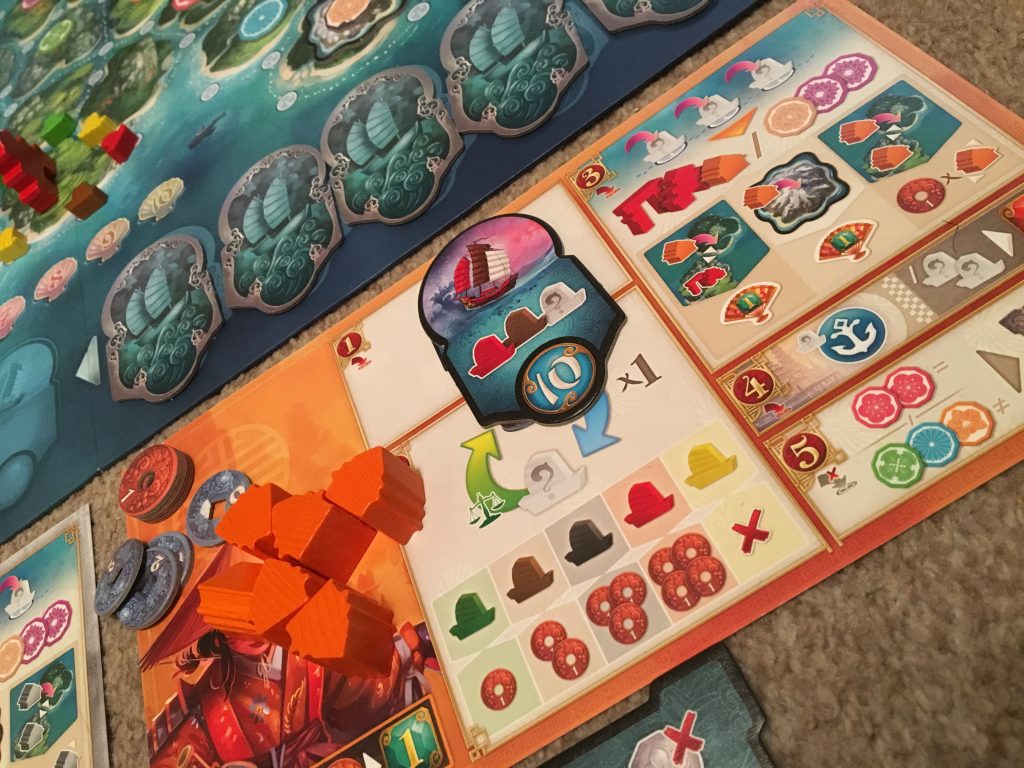 Among other Days of Wonder games that I have recently played, I like Yamatai less than Quadropolis and Smallworld, but I like it much, much more than Ticket to Ride, for example. I think I’ve missed a trick here by not having played Five Tribes as well, since that seems to be the closest comparison most people make, so I can’t comment on how well the two games face off. I really do like the Specialist features, the fleet drafting and the numerous ways to win, but I think the prestige buildings feel a little unrewarding and risky to use in many situations, as you simply can’t protect your investment and take full advantage of it often enough. The game has a pleasant element of randomness to several elements so that it feels fresh, but luck is very rarely the overriding factor in winning or losing.

Yamatai is likely to be an excellent, non-confrontational game for players who want to move their group onwards from outright gateway games like Ticket to Ride, but it still has elements of complexity (and strategy) that can grow with you. Young players will love it because it is absolutely gorgeous and there are tons of nicely crafted, colourful components. The Queen Himiko theme is weak since she barely has a role to play at all, but everything else feels like it belongs in Yamatai and I always love to watch the board transform from being populated by colourful Culture Tokens to teeming with colourful ships, houses, monuments and palaces. In summary, Yamatai is a good game, but not an outstanding one, and if you think you like the look of it, you should go with your instincts, because you probably will.