Did you mention that you were in need of someone going all medieval on your troops? That you were looking for a turn-based, tactical, fantasy strategy game that will come after you and your army with a masterful vengeance? Well, you are in luck! Warbanners is here to do those very things — and much more.

While not officially medieval, that was the first impression I got when I initially fired up Warbanners. The best part of that time, as well as every other time you start/restart, is that you are thrown immediately into battle. Unlike a lot of games in this genre, there are not twenty-nine pages of dialog and/or history for you to click through in order to get into your first fight. There is a simple, one-page story screen, explaining your environment (while adding a touch of lore), then you are off, and into war. Once into your first incursion, there is a screen that pops up right away to explain the easy-to-learn mechanics.

Starting from the beginning of Warbanners, everything makes sense. Each new piece that you learn along the way is completely logical. More than that, it is also color-coded! When you click on a soldier to move, every possible place to go is numbered and colored. If you want to move next to an enemy, then orange or green means you can still attack that turn. Red means that you cannot. It does not get any simpler than that. The number represents how many action points will be left after moving into that particular hex. So even without the numbers, you know whether you will still be able to attack or not during that turn.

Units from both sides all have a zone-of-control as well. If you enter one of theirs, your movement is halted — and vice versa. Obviously, knowing this makes it easier for you to set up ‘traps’ for their units and/or help to keep them away from weaker, behind-the-lines units (e.g. archers). In some games, once you are within an enemy’s ZoC, you are stuck there. Thankfully, in Warbanners, you are not. You can freely move in and out so as to put fresher troops into the front line if or when needed.

Another impressive aspect is that individual units level up. (I have never liked the everyone-gets-the-same-experience, blob-leveling-up mentality that some games employ). Once each soldier acquires enough experience points, there will be three randomized choices from which to choose. (e.g. strength, health, morale, etc.). This gives you a unique force. Sure, you could try to, for instance, keep two archers the same, but why not attempt to specialize each a bit more?

Even in your first battle, you will need to pay attention to your individual soldiers, the enemies (and their different types), plus your surroundings. The AI is not going to give you an easy, because-you-are-new type of victory. All wins during the forty-two step campaign are Earned. Each level along the way ramps up in difficulty as well. Also, when you start your second mission, as well as all subsequent assignments, heed the advice that the game gives you. If the instructions happen to mention liquid fire, it is a really good bet that you will need it for the upcoming skirmish. As you move farther along, there will literally be forks in the road; meaning decisions that you will have to make that alter your (hopeful) path to ultimate victory.

Luckily, the magic parts of the game are not over-emphasized in the beginning. The potions and spells are more for easing you into the usage and thought-processes of the game. If Warbanners started with everything that becomes available, then unlocked and thrown it at you all at once, you could easily be overwhelmed by having to deal with too much, too soon. As it is, in the beginning, you should be most concerned with the tactical and strategic aspects of the game. When you progress, the more abstracted and fantasy-like aspects become more involved and necessary for victory.

As a huge fan and long-time player of tactical games, trust me when I tell you that Warbanners is tough — but in a great way! It is not the brutally hard, rage-quit-inducing, impossible-to-win kind of difficult. You just have to pay attention is all. While it does get more complicated along the campaign trail, I never felt like I was unfairly overwhelmed or put in an unwinnable position or scenario. Knowing what I have already been through, I eagerly anticipate the next stage (without being spoilery and telling you where I am exactly — or how many times I have restarted), as I do every new battle. With every fight I do learn something — then take that information with me into the next foray. They aren’t the only ones that can curse troops (as in-put a curse on, not just yell obscenities at)  and throw liquid fire! 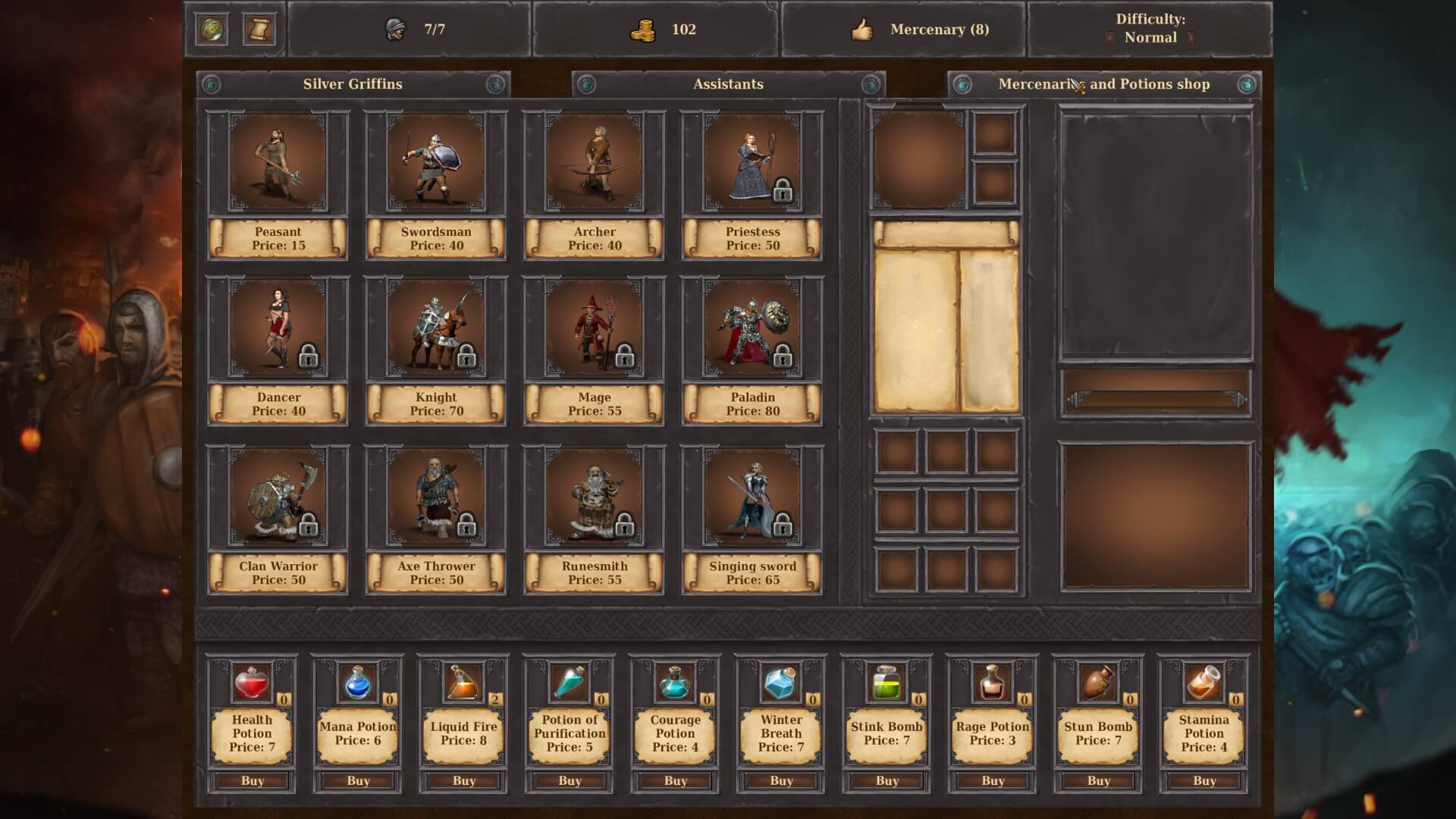 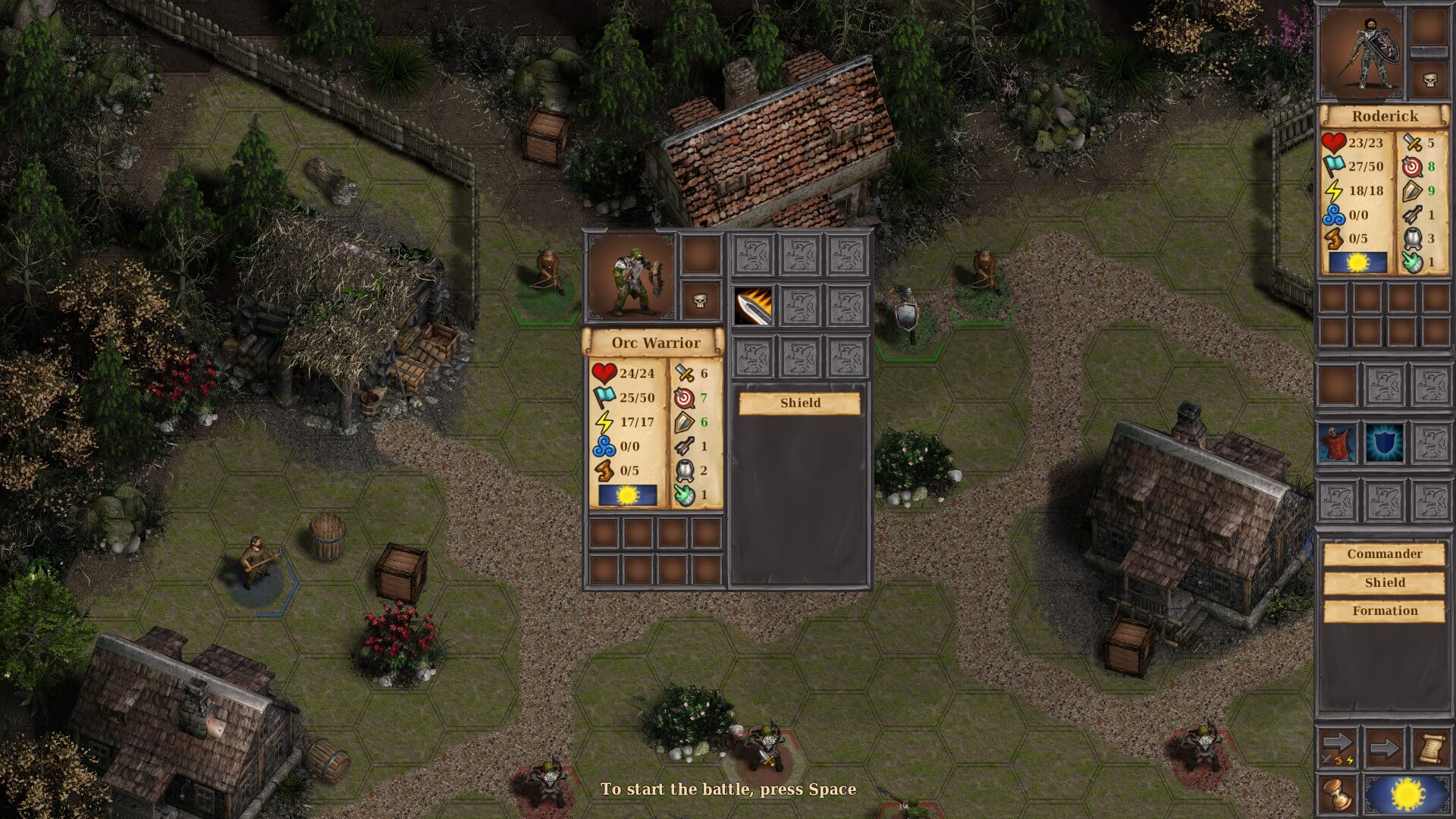 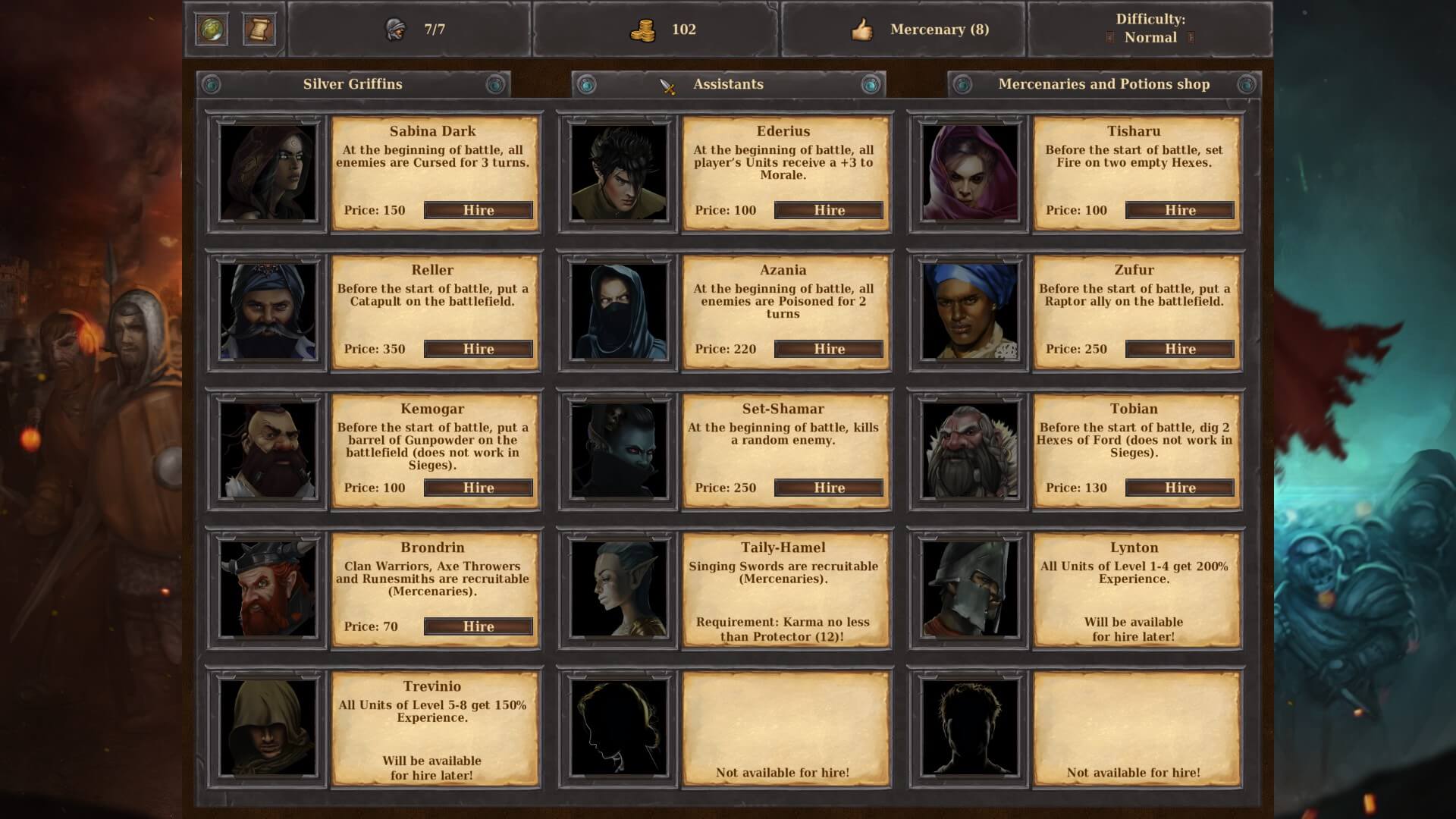 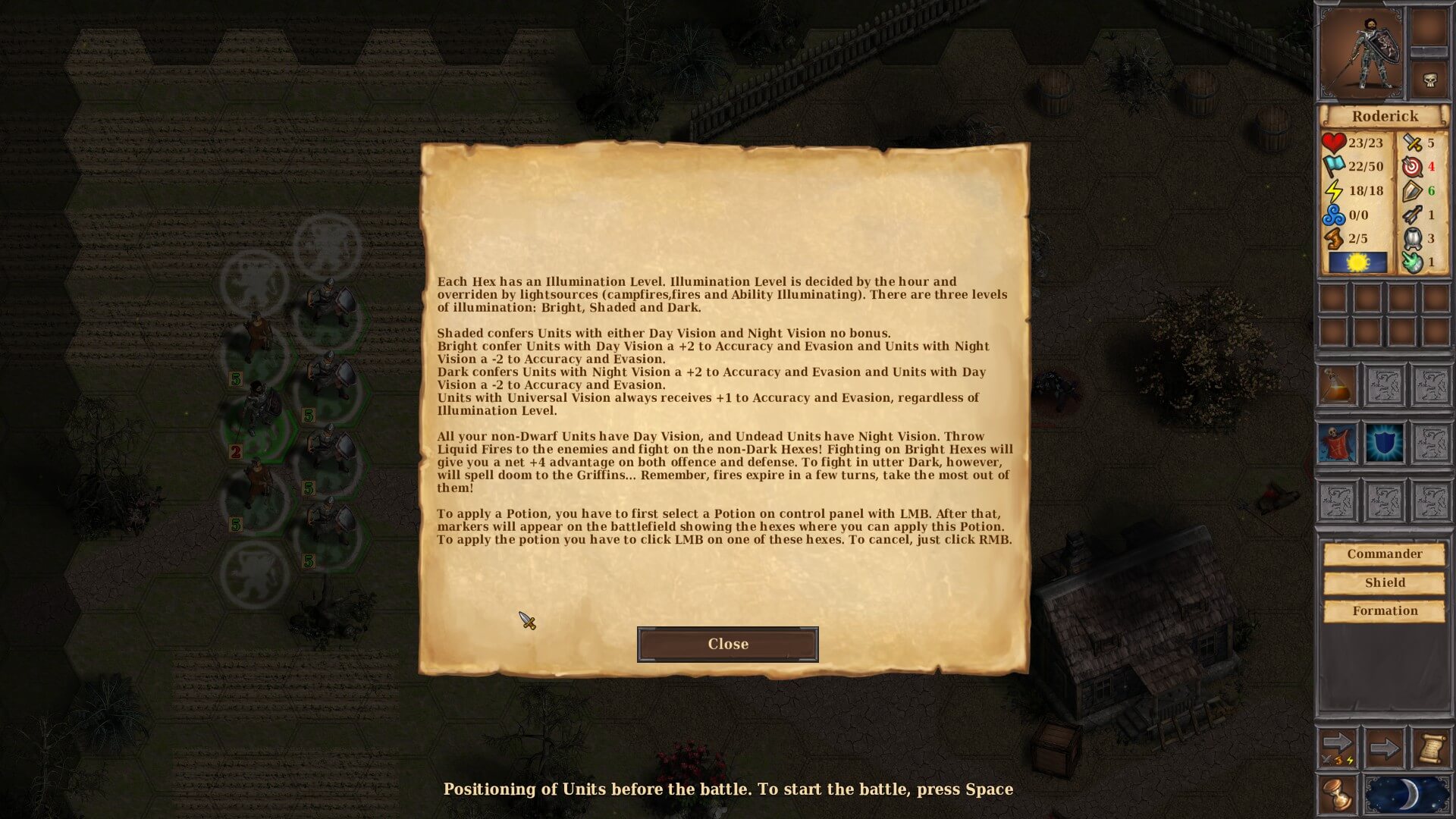 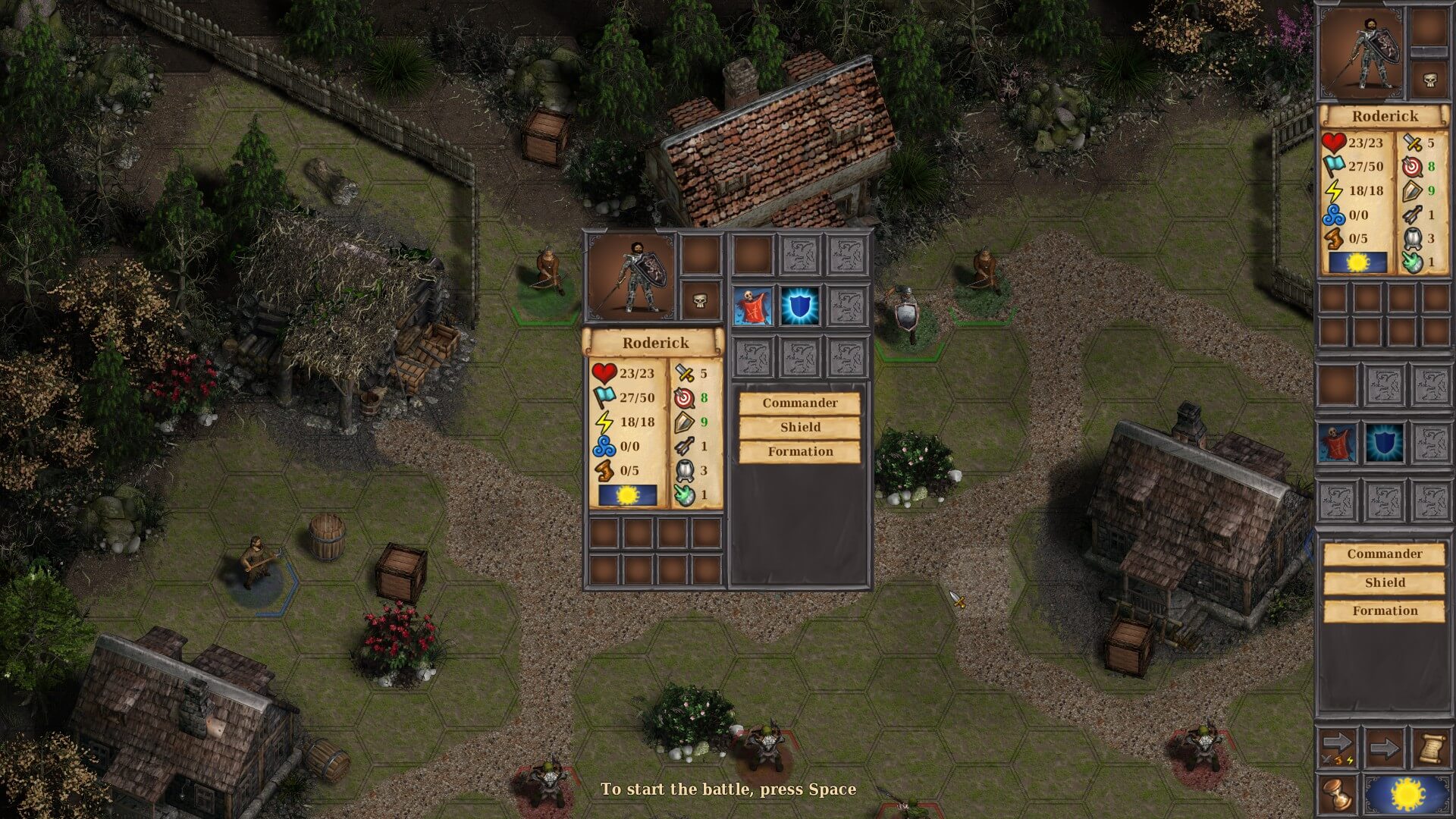 Leader stats.
Prev 1 of 5 Next