Earth Atlantis is the kind of game that lures players in with its amazing art style and promise of classic shoot-em-up gameplay with a modern twist. All is not what it seems beneath the surface however, and what began as excitement rapidly turns into confused frustration. Keep reading to find out why.

For the first five minutes, I was drinking the Kool-Aid. By any measure, Earth Atlantis looks fantastic. The sepia-tinted graphics are presented in two-dimensional fashion with detailed wireframe models and scenery that look a bit like schematic drawings. It may not sound like much when I write it like that, but trust me when I say that it looks great in motion. It’s also fairly creative, with robotic enemies taking the form of familiar fish — from electric squid to rocket-firing crabs, it has the lot.

It’s also a great concept. Earth Atlantis is based on a kind of open world approach in which players are free to explore in whatever way they want. There are usually several bosses scattered around each level and many, many smaller enemies to defeat in order to collect power-ups that will prepare you to face them. The challenge level feels good at first, too, setting the expectation early on that it is going to be tough. 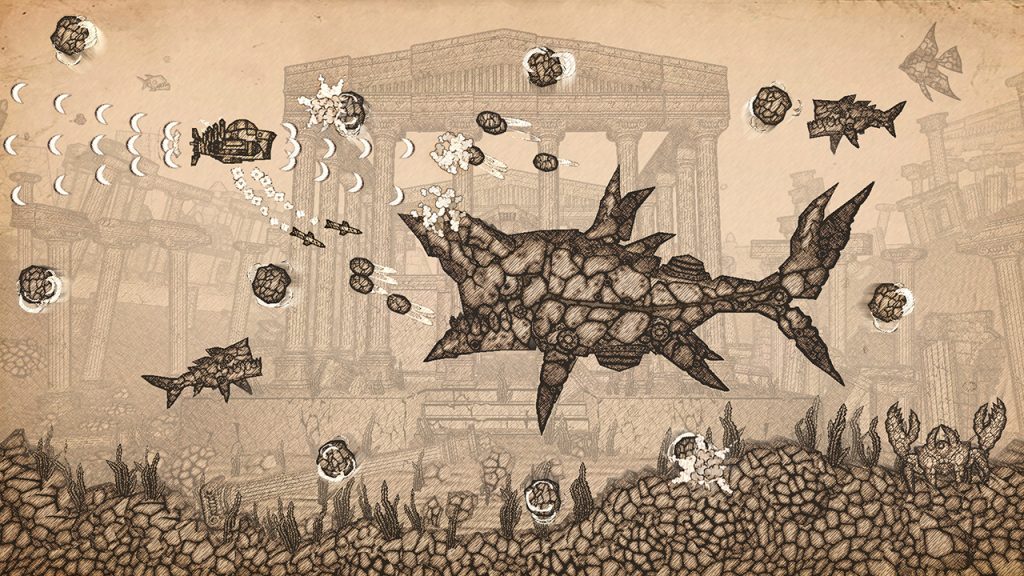 Unfortunately, most of the features that make Earth Atlantis good and different are also those that make it frustrating and often dull. The art style, striking as it is, makes it a nightmare to work out where you can and can’t go, for example, whilst the highest difficulty level feels unfair because of sluggish, restrictive controls. While there are various ships and an alternative play mode to unlock, the slow pace at which extra content becomes available means that many players will quit without ever seeing it.

To put some context to these complaints, I’ll explain a bit about the first level. The game is set in a post-apocalyptic world in which the icecaps have melted and the majority of the planet is now underwater. New York provides the backdrop for the opening salvos, with an imposing and accusatory Statue of Liberty watching in the background. The level itself consists of navigating between the steel girders that represent all that remains of the city’s famous skyscrapers, yet because of the art style it’s impossible to tell what is in the foreground and can be passed behind and what is a hard obstacle. 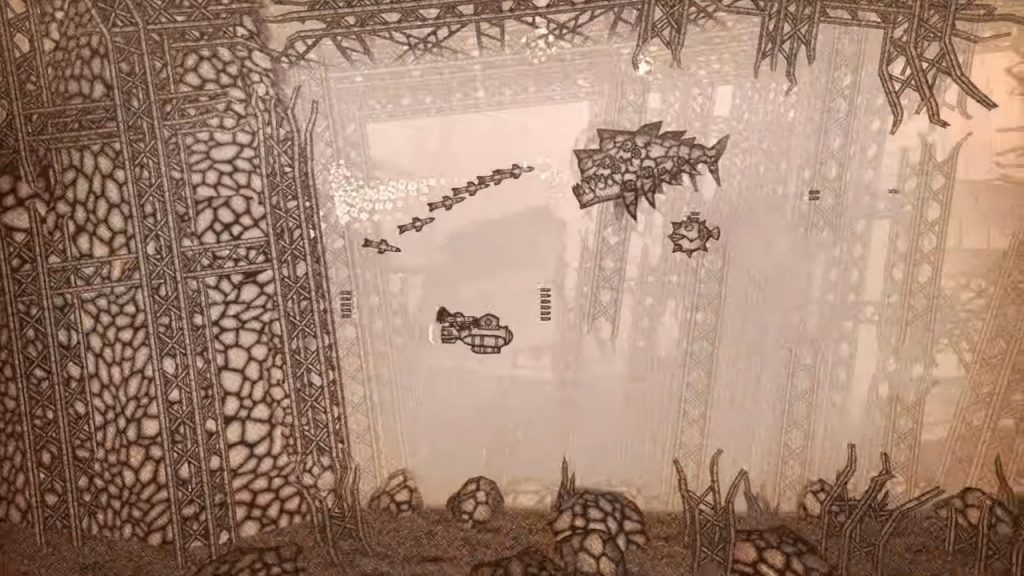 This isn’t helped by a vague and frankly near-pointless mini-map that simply shows points of interest on a huge blank canvas. In effect, it gives you an idea where bosses and power-ups are, but it doesn’t actually give any clues about how to get to them. You will learn soon enough to stay away from bosses anyway, because without grinding for weapon power-ups for a fair while, you’ll stand absolutely no chance of beating them.

This forced repetition would be acceptable if there were any sense or predictability to it, but there isn’t. Sometimes you’ll be tooled-up like an East End gangster within two minutes of starting a level, whilst on other occasions you’ll struggle to pick up a single primary weapon booster. Whether you upgrade or not, being killed by one of the (generally) very tough bosses will unceremoniously return you to the start of the level with no meaningful upgrades nor unlocks to show for it. It’s more than just a little annoying, because even a fully powered-up ship is hardly a match for even a mid-tier boss. 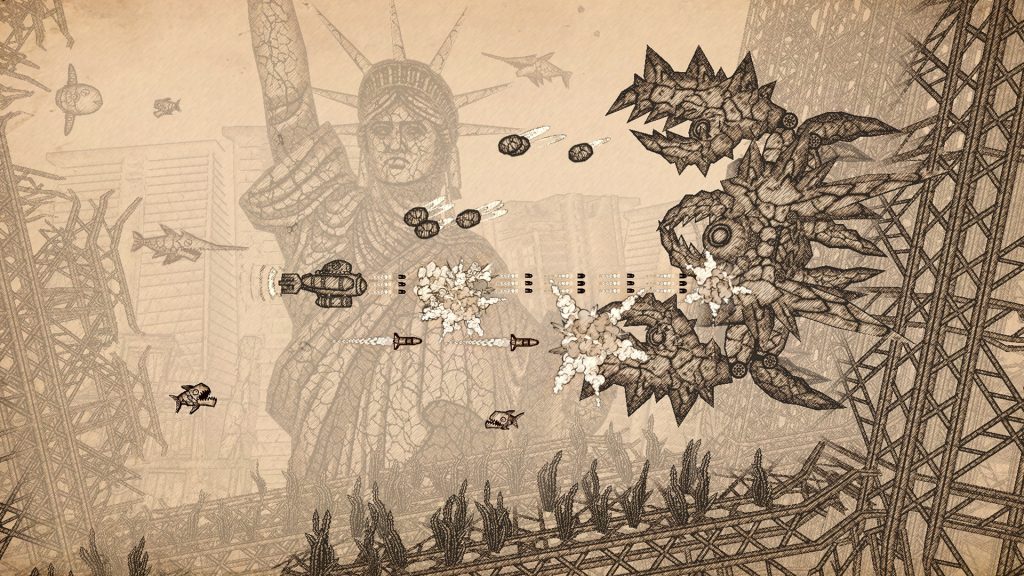 The main problem from the outset (and certainly when things get harder) is in the way that movement and weapon aim is handled. The player-controlled craft moves freely about the level — heading up, down, left, right or diagonally — and there are buttons to change direction and to fire. Each ship has a different weapon pattern which expands as the weapon is powered up, but the real challenge is that players can’t change the facing of the ship beyond left or right, while enemies can appear at all kinds of angles and shoot directly at you. This leads to situations where multiple enemies are firing at the player from several angles in a tight space, yet the player can’t effectively return fire. It’s incredibly frustrating.

In the end, I feel like Earth Atlantis is more of a missed opportunity than a bad game. It’s a great-looking one to begin with and it features an interesting concept that I really wanted to explore more. Sadly, the myriad of problems that I’ve described in this review prevent it from achieving the level of greatness that I expect it could have achieved. There is no multiplayer to keep you coming back and the one unlockable mode (Hunter Mode) is really only going to appeal to real completionists and massive fans of the base game. Worth a look, but only if you are dead keen on hardcore shoot-em-ups.

Earth Atlantis is available now on Xbox One, PS4, iOS and Nintendo Switch.