Void 21 is a story about the time you were a junior pilot checking out different ship combinations – and you actually spent more time crashing into things while swearing loudly about windmills and levitating cubes. It’s set within a digital wire frame world, with each racecourse/seed playing out different to each other.

There’s been a recent surge of tough, single-player racing titles, and while there’s no real official genre or standard for the titles – they tend to follow on from two titles that achieved Kickstarter success within five months of each other over three years ago. Race the Sun, and Distance.

Race the Sun saw you having to go as fast as you could to escape death. Racing through maps littered with boosts and jumps in order to further push you into travelling faster, and thus putting you at more risk. Distance however played out as a steadier journey, the maps were each pre-created – unlike RTS’ daily regenerated levels – and there was no forced push for speed. Rather than a need for speed the game created a need for focus, with aggressive terrain objects dotted through the levels, and certain sections of the map being aerial, or angled in a way that the player needed to use their car’s special abilities.

Race The Sun was Sonic meets Star Fox. A stylishly sterile, polygonal jaunt with a variety of levels. Distance a tough arcade, adventure racer in a dark, cybernetic future undergoing it’s own digital apocalypse. I still don’t really truly understand either of them, but I’ve gladly given them a lot of my time.

Void 21 builds on the framework of those two titles. The similarities shared are the strengths of these forefathers, and the weaknesses are only issues with understanding, not design – but more on those in a moment. 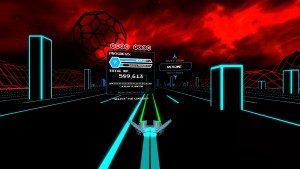 In Void 21 you are a the pilot of the experimental Void ship, with the seemingly simple task of journeying through levels in a fast, or deadly manner. Both routes reward you with a score, tick the seed as passed, and works towards levelling you up – advancing the simulation difficulty.

The Void itself is upgradeable, as you might hope, with five slots on the vehicle customisable between trials. Rebuilding and calibrating your load out is simple and self explanatory – Core, Engine, Guns, Gadget 1, Gadget 2. Each option details exactly what affect it will have on the vehicle, as well as carrying a little lore on each component. Importantly each category can affect one another, you can pick an engine which will completely drain your core, you can bolt on guns that will pull so much power you’ll slow to a crawl.

While there’s a decent selection of weapons, and more powerful variants of the classics, quickly unlocked – the ship really comes to life when you start messing around with the gadgets. An instant favourite of mine was what I refer to as the loser-lines, little, green beams which project forward from your ship’s wings giving you something to focus on up ahead. That said, once the Jump option, and the gadget that let me turn faster when I had a button held, became available the loser-lines were out.

All that said, there’s no perfect combination. While you might be levelling up regularly when you’re successfully clearing levels, and you’ll be unlocking new options, you’ll also be unlocking more enemy types, and obstacles, which will require you to slightly adapt your play style. That and, of-course, people instinctively play games differently. My careful edging, sometimes even full on brake-crawling through the levels certainly wouldn’t suit that of the rocket-reflex, turbo-powered players who have been gunning difficult racers, and twitch-reflex games for years. Whatever your play style, there’s a load out for it, once you’ve unlocked the new parts. So, it’s a racing game then, that lets you set your own pace – as long as that pace isn’t a crawl.

That’s the reason I came to enjoy Void 21 so much. While I would never play a game that offers the chance to traverse at super-sonic speeds entirely at a crawl, most games won’t let you drop the pace as you progress in the game. While the levelling introduces certain enemies which will be more effective against slower targets -I’m looking at your homing missiles, enemy ship- there’s ultimately no long term penalty to taking it easy after a few full-speed, face-first smashes into solid matter.

The introduction of new enemies, as I said earlier, is unlocked by leveling up – simply a case of having got X of score over any amount of levels – and is structured in a way that they unlock alongside new ship parts. Ultimately, it’s introducing a delicate difficulty curve, and it’s doing so while giving the player more options to specialise their ship to suit their play style. As sliding walls appear as obstacles, the gadget which allows you to weave faster appears shortly after. As troll walls – a passage which is always aligned to you, but looks like a moving wall if you are weaving around… and something that took me too long to realise what it was – appear, so to do the loser-lines.  It’s a commendable way to manage the learning curve in a game that, really, has no end.

I say that there is no end – there’s several modes in the game: Daily Run is the main mode, it features 30 levels, refreshed daily – it’s this that’ll keep people coming back. Endless Play is, actually, as it suggests, endless and each track plucked from the game’s database at random. Finally, and most importantly, comes Seed Picker a mode which lets you define the eight characters which make up the level seed you will play next. These characters are alphanumeric, meaning there’s 36 options for each of the 8 slots, meaning a massive amount of content (2.8211099e+12) tucked away to play.

That said there’s rough guides for the selection wheels, detailing that some define the density, or length of the maps – there’s certainly a technique to finding seeds that fit your play style – and it’s probably a good thing that there’s isn’t a ‘Random Seed’ button there because some of the seeds I entered – Festival, EasyMode, Goodseed – were all brutally, chilling camp-fire stories ending quickly, with thousands dead. The joy of having a system like this over a fully procedurally generated one is that core elements are repeated when you replay the same seed – it means you can learn the rough layout of the levels between screaming deaths, and better yourself.

Obviously, there are some elements which will be different when you return to those levels, namely enemy and obstacle distribution. When you return to your favourite seed you might find that the (@#$%&ing) windmills are replaced with jump pads and sliding tiles, and the various new enemies you’ve discovered since you last played.

It’s a great title, with a lot to offer. It’s frankly nigh on impossible to finish everything the game has to offer, but that’s not the point of it, the point is to feel the need to return the following day, play a few levels and then pop off to another game – it’s managed to have me do that each day since I got the game.

If you want a game that has the variety, and minimalist design of Race The Sun, the darker, cyber setting of Distance, combined with a wonderful variety of enemies, an excellent (if only 5 tracks long) soundtrack, and a way to access 2.8+trillion levels within a few clicks of starting the game… Void 21 is for you.