For most Star Wars fans, the winter of 2017 is showing a lot of promise. Hype for Episode VIII: The Last Jedi is already picking up speed and unsurprisingly, Electronic Arts will release Star Wars Battlefront II in the run up to Christmas this year. Whilst fans of the series will no doubt be eager to experience both of these additions to the world of Star Wars, I’m hoping to bring a very different experience to your attention. As an experience, think of Imperial Assault as a board game alternative to Battlefront and you wouldn’t be far from the truth, so if that sounds like your kind of thing, then read on, my young apprentice!

More specifically, Imperial Assault is a big box Fantasy Flight board game that was first released in 2014. The ‘big box’ bit means that Imperial Assault was one of the leading lines for that year, which (in the world of board games) represents a big investment in design, development and marketing budget that equates to a considerable risk. Thankfully, FFG’s faith in their product appears to have paid off, with Imperial Assault already the recipient of multiple expansions (both large and small) and significant commercial success. The game has already received considerable critical acclaim over the last few years, but board game systems age quickly, so I’ll be focusing mostly on whether Imperial Assault is still relevant today and, in turn, if it’s worth investing in during the next few months of dark winter nights. 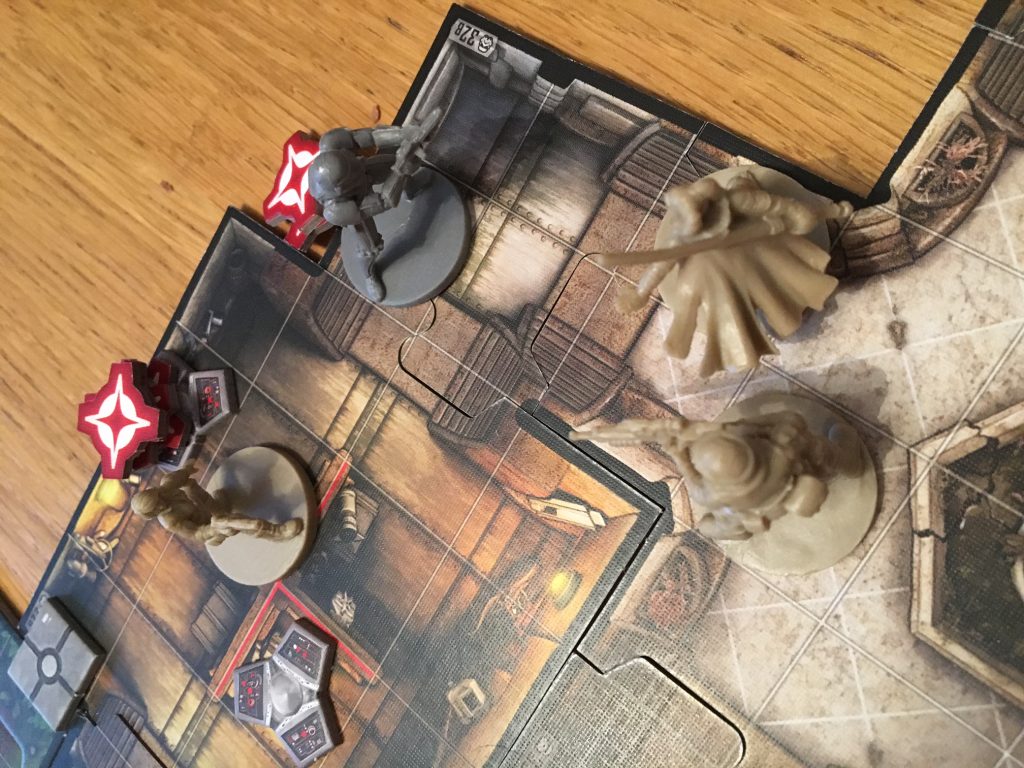 First things first, Imperial Assault has one of the best, most thematic and most interactive dice-rolling combat systems I’ve come across, even judged by modern standards. The trend from around the middle of this year has been for board games to use decks of cards (or similar, modifiable systems) to determine the outcome of combat, rather than dice. Imperial Assault sticks to the old-fashioned way of die rolling, but it uses a large number of heavily customised, colour-coded dice to determine the outcome of each attack whilst remaining incredibly simple. I mention this first because thematic combat is exactly what Imperial Assault does best — right from the first turn of every mission.

Every weapon rolls a different combination of dice and each die will include a number and, possibly, a combination of hit and surge markers, depending on the face. The cumulative value of the numbers equate to range (die faces of three plus two would result in a range of five squares) and the total hits are self-explanatory. Surges are when the interesting stuff happens, with each Hero or unit being able to use surges in different ways — sometimes to add hits or range, sometimes to add modifiers such as Cleave (which carries damage to a second, adjacent enemy) or Pierce, which prevents damage from being prevented. On that note, defenders roll a number of white or black die to reduce the number of hits that land, with some able to dodge taking damage entirely. I’ve always found this system to be fantastic and it really allows players to make the most of their character’s strengths and weaknesses in combat.

The first mission has a team of Rebels assaulting an Imperial base. Picture Return of the Jedi‘s shield generator on the Endor moon and you wouldn’t be far wrong. A group of Stormtroopers and a low-ranking officer are caught off guard and ambushed by the heroic rebels, but once inside the base, the odds are stacked against them when an alarm sounds. Later missions are determined as part of a campaign that changes based on who wins each battle, meaning that the experience will vary for each player group. As you might expect, both Rebel and Imperial players gain experience (or influence) and money after each mission and as the Imperial player gains access to better and better troops, the Rebels gain better items and skills. 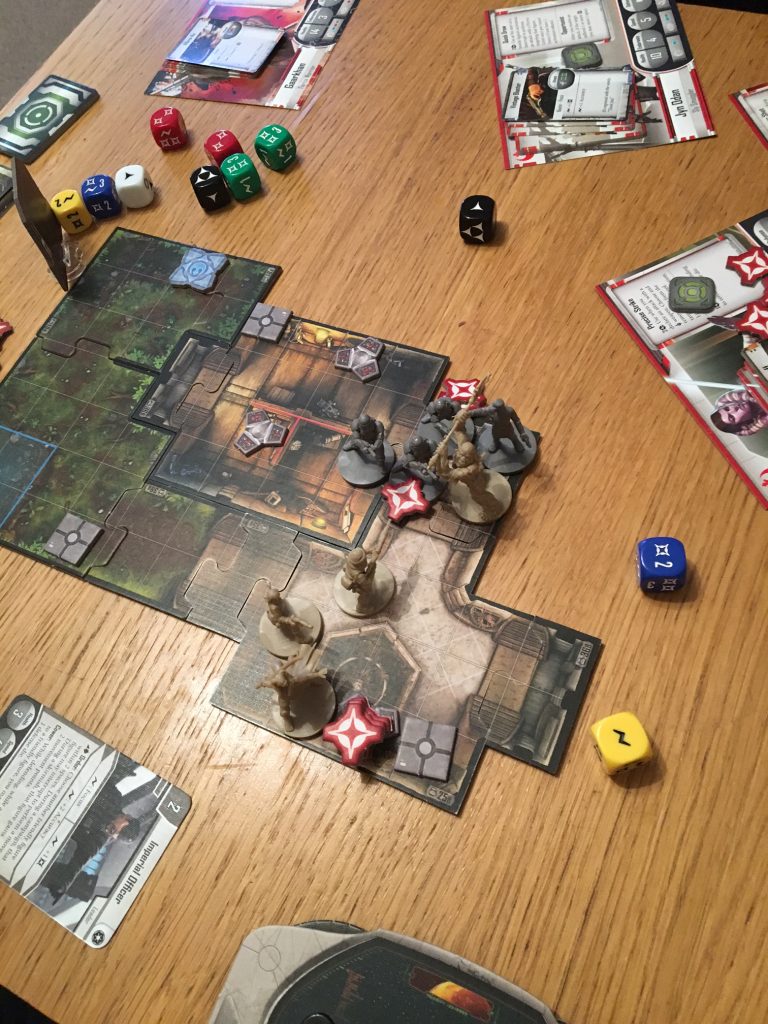 In addition to the campaign mode, the game also features a skirmish mode which, when you consider the tens and tens of expansions already available, enables players to pitch battles between incredibly varied forces on either side. It’s more Warhammer 40k than Warhammer Fantasy Battle in scale, which means that whatever mode you play in, each hero, villain or group of troopers really matters to your success or failure. Rebel heroes are hard to kill, but if the Imperial player deals enough damage to them to flip their character card over, they become wounded (and suffer penalties.) If all Rebels are wounded, the Empire wins, whilst the Rebels will commonly have variable objectives based on the mission at hand.

Most players are likely to focus on the campaign mode and to be honest, that’s fine. There are tons of missions to work through and there is certainly a feeling of escalation as you proceed from one mission to the next. Not only does the Empire begin to introduce more and more terrifying units (including the awesome AT-ST included within the box) but previously seen units receive elite upgrades. This ensures that even as the Rebel players gain more and more powerful skills, the challenge for both sides remains relatively even. Although the box includes over thirty miniatures, it also features a number of tokens to represent characters like Han Solo or the droid IG-88 (as well as their rulesets), which means everyone can complete the campaign without needing to buy additional miniatures.

In the box you will receive character packs for Darth Vader and Luke Skywalker, which hint at what is to come. Aside from the minis and character cards, these packs also contain further side missions that are often integrated into the campaign itself, so the whole thing comes together in a really thematic way when experienced across maybe ten or twelve plays. As with basically all modular FFG games, the Imperial Assault board is high quality, double-sided and interlocks fully, allowing for a diverse range of settings which (out of the box) include two indoor and two outdoor themes. 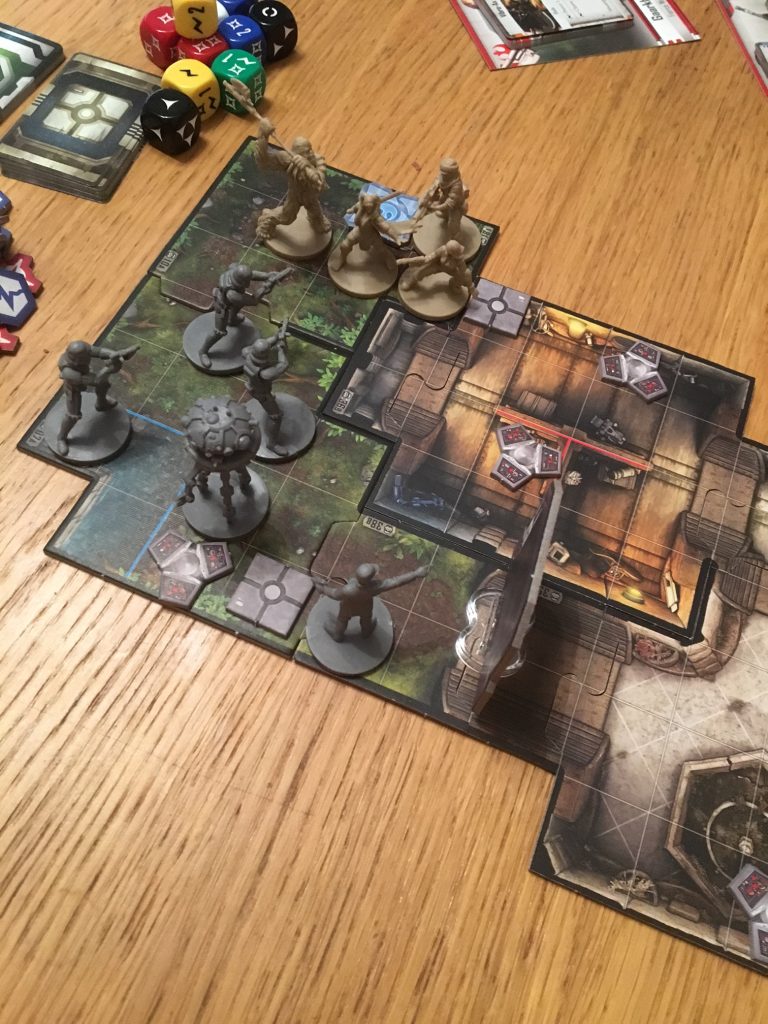 I’ve been playing Imperial Assault on and off since it first launched, but it’s only in the last few weeks that I’ve really pressed on through the campaign, which is an experience that has left me feeling as if I’ve missed out. As the Imperial player, I’ve really enjoyed the experience of acting as the Dungeon Master in such a strongly themed Star Wars universe. I’ve seen the successes and failures of my Rebel friends and whilst I’ve had to intervene with house rules (usually an extra turn to complete a timed objective here or there) I’ve found the game to be incredibly balanced, considering how much potential variance there is following a few campaign missions.

I don’t doubt that any self-respecting Star Wars fan and gamer will be picking up Battlefront II this Christmas, but I’d urge anyone who is looking for a more subtle (or even a supplementary) Star Wars experience that can be enjoyed with a beer or two and some friends to consider Imperial Assault this winter. There are potentially weeks and weeks of play to be had here with both campaign and skirmish modes considered, yet games can be completed in 60 minutes with a high degree of certainty. When all is said and done, few board gaming experiences can match the excitement of outflanking an AT-ST or watching Vader and Skywalker duel, especially when the outcome hinges on such a finely balanced combat system,

A copy of Imperial Assault was provided for review purposes and can be purchased via 365 Games or through one of the shops found in this handy Store Locator.