Slimes have always been there for us. It’s time we were there for them in Slime Rancher.

If you take a brief moment to look up the history of “Slimes” then you will find that they have been around for a LONG time. Dating far back, in films such as 1958‘s “The Blob” and then we have the classic 1974’s “Dungeons & Dragons” featuring a multitude of slimey deaths. “Dragon Quest” has its famous slime mascot, that to this day, is still it’s trademark and has been since 1986. Then, in 2017 we got Slime Rancher.

Say what you want about the gelatinous goobers, but geek/gaming culture loves colorful blobs with happy faces on them. My career into games journalism began with a game called “Attack of the Gelatinous Blob”. If it wasn’t for Slime I might not be writing this. Okay, I probably still would be but you get the point. Slimes can do no wrong.

Gaming history lesson aside, we have covered Slime Rancher here on the site before. Back in early January we did a preview when Monomi Park released the Slime Science update. Since then we have had Ancient ruins added, customization options, Gordo snares, and finally the Glass desert which lead to the final release of Slime Rancher. Then a post patch release came almost right after the games official launch date.(It was hard to keep up while writing this review!) There is plenty to cover here, but most of my feelings from the preview still hold true. Slime Rancher tasks you with capturing slimes, exploring, and maximizing your profits from slime poop. What makes Slime Rancher unique is that it is all done from a first person perspective. The world is a vibrant and colorful place that welcomes you with open arms and makes it hard to leave. I have played Slime Rancher for hours and it felt like minutes. It’s just that fun. There is always something to do or see and usually many goals for you to accomplish.

I know it’s cliche but Slime Rancher is only going to give you as much as you put into it. If you are coming in here expecting Stardew Valley, you are making a mistake. In my preview, I compared Slime Rancher to Viva Pinata in the same way Stardew Valley is to Harvest Moon. What I meant by that is that these games have crossing ideas and themes, but at the core are very different from each other. Comparing them is silly, ultimately. Which brings me to the base features of Slime Rancher. If we boil it down and remove all the fantastic cuteness and sap all the charm and aesthetic. What we have is still a really fun and enjoyable game that gives you quite a bit to do. Capturing ‘livestock’ and mixing them for maximum profit, setting up your Ranch perfectly, exploring and unlocking all of the treasures. Diving into the science crafting system, which albeit is more about fluff then anything.

I have racked up about forty hours, easily, and still haven’t unlocked everything. One thing to keep in mind though is that the late game is more about fluff then anything else. The initial experience of Slime Rancher is by far its biggest highlight. Finding a new slime and sucking it up happily never gets old. Passing my chicken coop and mimicking their squawks never gets old, for me. Discovering a new zone or place always holds a mystery and I loved exploring. Watching my drill and science machines dance is adorable.

No game is perfect. Lets get real though, the end of “Adventure mode” isn’t as exciting as I would’ve hoped. However, the game doesn’t necessarily end at that moment. If you are the type who enjoys getting everything in a game or setting up the Ranch exactly how you like it; then there is plenty to sink your teeth into. Still the end is more of a whisper then a bang. There are some things that felt somewhat hollow in this densely rich world. Primarily the story aspect of Slime Rancher I didn’t really care about.

Throughout the game are letters and journal entries that tell two separate stories. The problem is that that they serve no purpose to the game whatsoever. I had a hard time getting involved or caring about the story because it didn’t really have a face. I would say the lack of NPC’s in Slime Rancher is its greatest flaw. It’s just you, slimes and some letters. Why stop and read a letter when I can be off doing something way more fun. If the journal entries had been directly tied somehow to the core gameplay, It might’ve of been different. 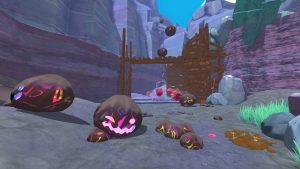 Combat at times comes off feeling hollow as well. While I loved that the Tarr existed and I was very careful at all times on the Ranch, out in the wild, combat is pointless and more of nuisance as fear of death is usually zero. I died more from water and falling than anything else. I would’ve loved to have seen some reward from killing Tarr or perhaps a whole area dedicated to them for combat purposes. Bringing in useful science gadgets like the turrets and maybe make fighting slimes?  Using the different attributes of each slime to make them useful in combat? Oh and it would’ve made those health upgrades more useful.

One other gripe I did have was the fact that Slime Rancher didn’t have a map, but one post release patch changed that. So yeah, good job Monomi Park.

Let’s bring it all together.

Having boiled it down and examined features, lets bring back all the amazing aesthetics, themes and joy which launches Slime Rancher into the stratosphere. I love how Slime Rancher looks if that isn’t clear. Even the Glass desert which is supposed to be a bare, dry and boring area looks amazing. Watching Gordo slimes get fatter and eventually explode is horrific but its adorable! The music and sounds all enhance Slime Rancher in the visuals department. When The Tarr show up, d the music dramatically shifts. Or he humming of my rad slimes. Hearing my slimes play with their toys. There is nothing negative I can’t think to say about the music and sound of Slime Rancher. It delivers exactly what it needs to, but I can’t think of one track that exactly blew my mind. Still pleasant nonetheless.

It’s undeniable that Slime Rancher is cute. The beauty of it being in first person makes it feel like you can reach out and touch the world. This combined with the gameplay makes for an unforgettable experience and one worthy of your attention.

There wasn’t a game like Slime rancher before its release and their hasn’t been after.

From an innovation standpoint, Slime Rancher knocks it out of the park. I can’t think of a single game that works as smoothly in the same fashion, but does thing so differently. When you launch Slime Rancher, its helpful guides, tutorials and theme make it very welcoming to new players or to people who have played it since day one.

Just write out the idea of Slime Rancher on paper and it sounds crazy. It’s a FPS game where you farm slimes and their poop with a vacuum gun. My first question would’ve been, “Are you high?!” 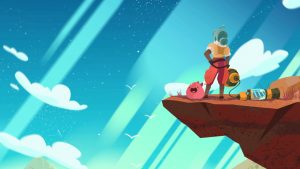 I want to see more games like Slime Rancher and I certainly think that it is an Early Access success story. Proving that the system can work if it treated correctly. The developer seems keen on adding even more content which I will gleefully await. The only thing lacking is probably a replay value. Slime Rancher is very modular in the way it lets you change or remove things. Starting over again is kind of pointless. Perhaps adding different starting ranches might change this.

If you are looking for a game that is relaxing, fun, and doesn’t take itself too seriously then you need to check out Slime Rancher. The game is brilliant, cute and I highly recommend it. Oh and unlike other Early Access games, they didn’t jack up its price on release. Kudos.