Fictorum does plenty of things right, but sometimes ends up feeling like an engine test.

The idea behind Fictorum is your mage wields real, legendary power right from the start. No sparks, magic missiles, or paltry magic tricks for you. You are an all powerful wizard and everybody should fear your wrath. The idea of starting off a game as a Dumbledore or Voldemort type of power sounds fascinating. Most games go with the cliche of a hero’s journey, starting small and evolving as the game moves forward, only truly feeling like a real hard core hero after the mid to end game.

Fictorum aims to do things differently and that is what drew to me this particular title. The preview shows you casting fireballs, raining meteors down on villages, and generally laying the beat down on all of your enemies. I even did that cool thing where I blasted an overhanging stone bridge and watch the debris rain on my enemies. More on that moment in a bit.

The question is does it deliver on its promises? Yes, but there are quite a bit of issues and design choices that take away from the overall experience.

Now before we dive into our magical adventure review, there is something that needs to be noted here. It’s 2017 and the game takes several minutes to load, every time you start it. I don’t know what that is about but its not my favorite thing in the world.

After waiting for the game to load I was surprised to see that there was character customization. While the options are limited it’s still nice to see that feature as I wasn’t expecting it at all. You can choose what colors you wear as well. I choose bright pink because it’s stealthy and screams “Magic!” with waving jazz hands. Sadly, Fictorum doesn’t allow for female mages, not sure why. I am sure it’s for some sort of lore or script reasons.

Aside from giving myself an awesome mustache, you choose a title. The title represents your starting equipment/spells. Firebrand uses fire, Tempest uses lightning, you get the idea. There are a total of twelve titles with some of them having goals in order to unlock them. After choosing a title, then you’re off to fight the evil inquisition. 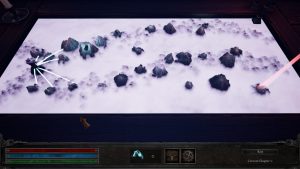 The story basically goes that you are the last Fictorum, a clan of super wizards. After escaping execution you begin your blazing trail of revenge. Which brings you into the map section. This area screams FTL. You start on the left side of the map with a “Nexus gate” on the right that will take you to the next area/chapter. Every time you make a move, a random event can occur or battle scenario. Sound familiar? Additionally if you linger too long the Inquisition begins capturing territories behind you and tries to swallow you up.

I was quite impressed with the implementation of this system. It would’ve been far easier just to make a plain mission structure and have you go through levels just randomly killing stuff. The developer instead put plenty of lore and thought into the scenarios, which I liked. It gives you the option to do what you like sometimes. Intervene and save a town from bandits or move along. One I enjoyed in particular was a tree that was making odd sounds. Instead of blowing the tree up I kept calm and found out it was just some kids fooling around. These little text moments were very nice and well written. I appreciated the personality it gave to Fictorum.

One gripe I did find about this area of the game, is it was too long. There are a total of eight chapters for you to complete before facing the final boss. This can be very, very grindy after a while, even with those nice random story events. Especially cause of how combat and looting works in Fictorum. To be fair you can save & quit whenever you like.

The combat takes place from third-person perspective. Every time you start a level you have one basic goal of making it to the exit and killing everything in your way. Sometimes there are optional goals but for the most part, just get to the exit. Now the big highlight is the spell-bending system. This is what supposed to make you feel like a grand arch-mage and make everyone else a worm. What the system basically boils down to is adding effects to your spells. You can make your Fireball spell more explosive, add more projectiles, travel farther, etc. Same applies for other elements and most spells. Only three effects can be on a spell and they can be equipped and changed outside of combat.

The problem lies in what I like to call the “oomph” factor. Outside of very specific spells in Fictorum, most spells just lack the oomph. You’re supposed to be a master mage who is all powerful but your spells feel pathetic at times. If you try any other spell type like Lightning or Ice you feel like a weakling. The spells with oomph like Meteor and Blizzard are only found deep into the game. Which kind of defeats the purpose of what Fictorum set out to do. Make you feel all powerful.

The destructible environments are awesome when you have the right spell that just makes things explode. The problem lies in that blowing up buildings means you are blowing up your loot. One of the many design decisions I question is that for you to effectively progress you need to raid every house you see. Loot is randomized throughout all the buildings in the game. When you enter a building the game switches to first person view and indicates where things are with a shiny flickering. Loot comes in standard MMORPG format being able to upgrade spell cast time, more mana, more hit points with the standard varying grades of rarity, purple, orange, etc. 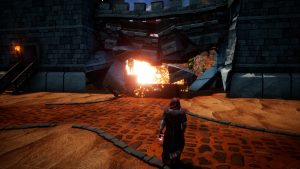 The enemies do drop loot but very rarely anything you need. The only way to get loot you can use effectively is to stop the combat, and go on a house tour. It completely breaks the flow of combat.

Finally combat itself is not free of its own issues. AI is very limited and just charges straight at you no matter where you are. There is no targeting reticle until you are ready to cast a spell which is a problem because if you empty your mana bar while aiming then it takes from your health which is precious in Fictorum. Meaning you better raid those houses. Adding a simple dot or anything on the screen would’ve helped this issue immensely.

Remember that moment where I blasted that overhanging stone bridge and collapsed it on my enemies? Well, what the game doesn’t tell you is that the debris eventually just evaporates magically. So when I moved into the kill the rest  I found myself surrounded and then, dead. Not that death matters all too much because you have unlimited tries to do things over, unless you turn on hardcore mode.

I will be honest Fictorum doesn’t make the greatest impression the first time you play it. Managing items in your inventory, enchanting, and constantly looting houses just takes away from the game. I did have fun with Fictorum as you get into this groove of killing all enemies and then doing your house tour. Plus when you find those awesome spells, its fun to use them. It all just takes some time to get used to and its not going to be every ones cup o’ tea.

Then there is the graphics. 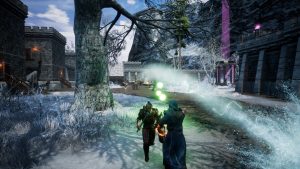 Speaking of not every ones cup o’ tea, Fictorum feels like an MMORPG that came out in the early 2000’s. The houses are detailed and spell effects are sharp and fantastic but all the models are horrendous looking. I kind of laughed at how dead inside the villagers would look sometimes. The good part is that your far too busy to notice most of the time cause your either blowing stuff up or in first-person mode desperately searching for a potion or shiny stuff.

The odd part is that I tried to run this game on ultra and it started to drop frames like crazy. I am not sure if that’s because of the Unreal engine and lack of optimization or my PC. I am betting on the lack of optimization. The game is just not that graphically mind blowing.

The music and sound effects are actually top notch in Fictorum and one area I had no complaints with. There wasn’t a time where the music became grating on my ears or annoyed me. The spells may lack oomph when it comes to combat but the sound does nail it. Which kind of feels odd at times as you expect more for such a great sound. You can expect a orchestral soundtrack that shifts depending on whats happening. The combat music is probably the most repetitive part but again I didn’t really notice it all that much.

Fictorum does have quite a bit replay.

I played the game for almost five hours and only managed to get through about six chapters. I unlocked one title in my first playthrough with plenty more to go. Replay value is high in the fact there is plenty of loot, spells, and combinations that can be experimented with. Plus the game is fun, you just have to be able to deal with some of the counter-intuitive systems. It all really depends on how much you invest in Fictorum but you can get anywhere from ten to fifty hours in the game.

When it comes to controls you have the option of controller support which in combat works just fine. The only problem lies in managing inventory and enchanting where the mouse and keyboard are just a bit faster to use.

Currently Fictorum does have Steam achievements but no Steam cards.

Fictorum can make you feel all powerful, but still requires a bit of a build up.

The idea of Fictorum is really fun and a very innovative good twist on the genre. Unfortunately, I just think there were some hang ups that prevented it from reaching its maximum potential. The game is still receiving updates and bug fixes. There is really nothing preventing them from streamlining and improving the game.

Fictorum is best suited for those with plenty of patience and who don’t mind investing time to get their magical bloodlust sated. If you are expecting instant gratification though you should watch some videos first. I personally recommend the game alone for the Meteor spell shattering a bridge in a spectacular fashion. You don’t see that in games very often and it is quite a sight to behold and never gets old.