Health bars got you down? Tired of hacking opponents to bits with a sword, only for them to continue on fighting? Try Slice, Dice and Rice, the fighting game where just one hit can be fatal!

We all do it. Playing video games does at some level require at least some suspension of reality. Besides, health bars and fighting games have gone hand-in-hand since their inception. Even though it’s a game (and we all know it’s a game) that doesn’t mean every now and then a little more realism wouldn’t be appreciated. Taking a hit to the head with a massive sword probably should kill the enemy. Although it’s not a hypothesis I’ve personally tested, it’s most likely a safe assumption. Good thing that Dojo Games brings us Slice, Dice and Rice. No silly, only in a video game, health bars. One hit can and will kill.

Wait a minute, couldn’t you kill enemies with one hit in….

…Bushido Blade. Yes, it certainly was part of the appeal of Bushido Blade. Dojo Games doesn’t hide that fact either as they do state that Slice, Dice and Rice is inspired by Bushido Blade. Although this is more of a mash-up of Mortal Kombat and Bushido Blade. Give that a moment to really sink in.

Sounds good. Any story to go along with it?

Yep, we got a story. Slice, Dice and Rice is set in an alternate version of the Japanese underworld. There are 8 different fighters, each with the own unique story and/or goals. It is a fighting game, so don’t be expecting some kind of earth shattering story line. Think more along the lines of each character having a “story” in Mortal Kombat or Street Fighter II. It adds just enough to the overall experience without getting in the way of all the stabbing and slashing. I really hope it’s not a *SPOILER* to mention that the story just may involve a need for some form of fighting. It is a fighting game after all right? 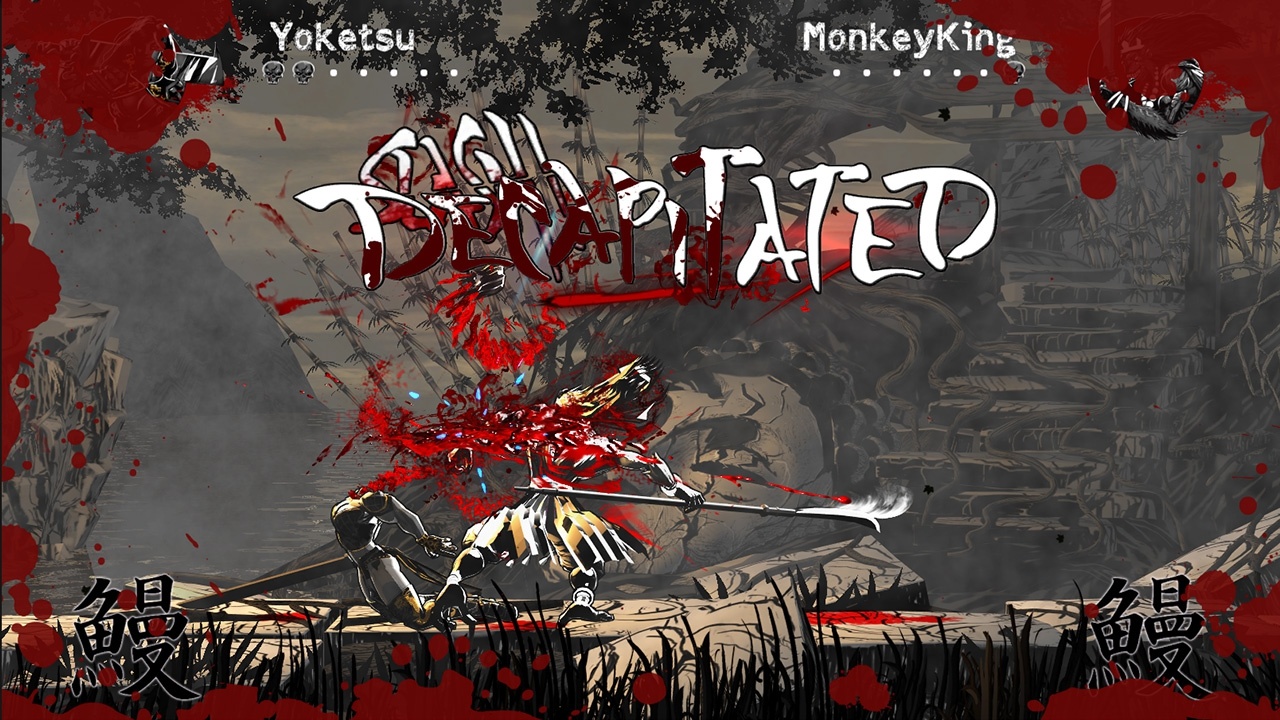 Off with their heads!

Time to make good and talk about the chopping, stabbing and decapitations. The moves are about as straight forward as they get. There is a horizontal slash, vertical slash, heavy blow and parry. Wiggle the controller around all you want, there are no magic fireballs that come shooting of anyone’s hands. This is basic, but in a rather good way. Instead of reliance on a players ability to memorise and then pull-off a set list of command’s to do any damage worth a darn, Slice, Dice and Rice really does let just a single blow take down an enemy and that single blow can be performed with a single button press. Of course it’s not entirely that simple.

Instead of that series of complex movements, success relies more on timing and the ability to set-up an opponent for that killing blow. Setting up a foe requires penetrating their defence. That defence, and yours as well, relies on parrying, clashing of weapons (both attacking at the same time), feinting attacks or just a good old dash. Jumping probably counts as a defensive strategy as well, although not a very good one. Sometimes however the best defence is having a good offence.

While horizontal and vertical strikes can be parried, on the ground and in the air, heavy blows on the other hand can not. Just falling back into a complete defensive shell will not end well. How bad will it end? Let’s put it this way, there will be a few things no longer attached to your characters body that should come off, like their head. With all heavy blows however they do come with the downside of taking far longer to wind up, thus leaving yourself exposed during the process. Man are they ever fun though when they land. 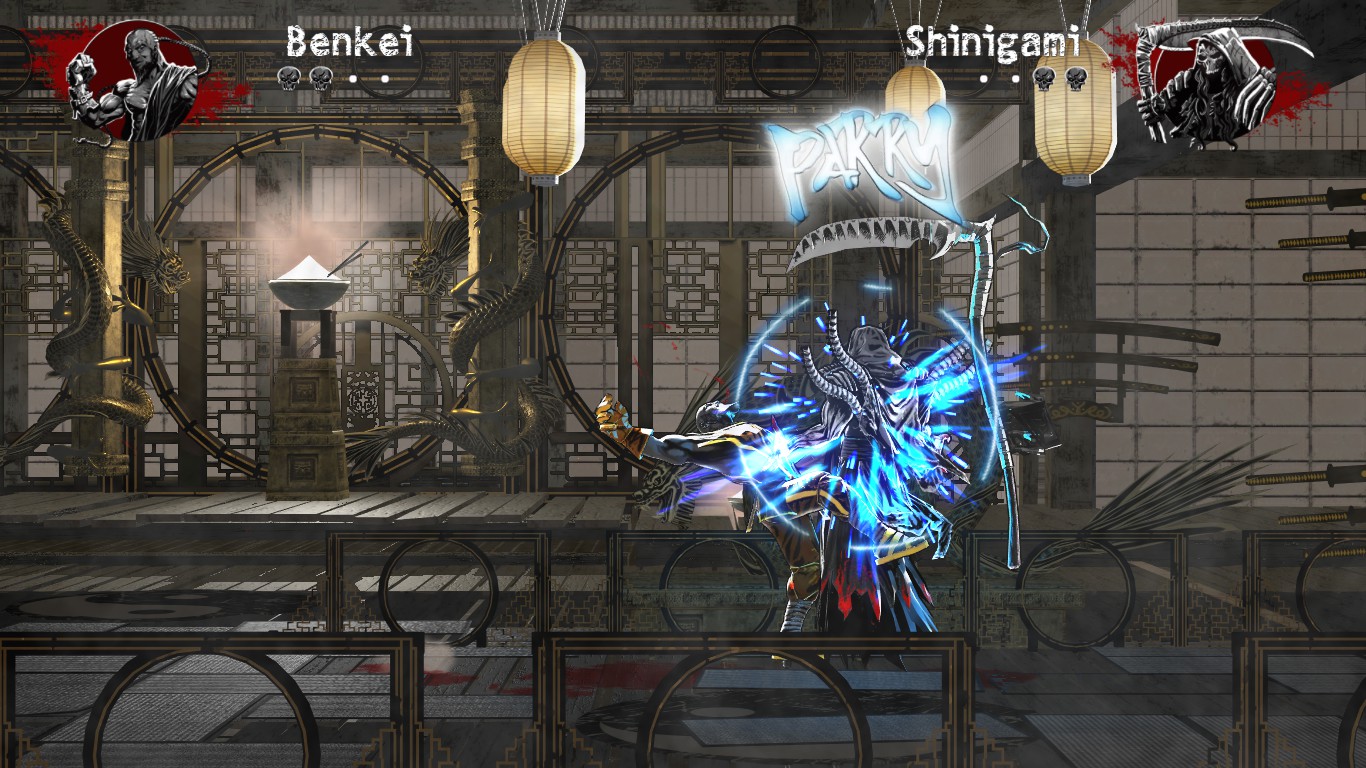 One of these things is not like the other.

There are 8 distinct characters in Slice, Dice and Rice each with their own unique weapon. From fans to pole-arms there is a nice variety of weapons to hack and slash with. Except Benkei, he’s got a, um, glove. Want to know what doesn’t kill an opponent in one move? Punching or kicking them. That’s what the monk character Benkei does however, so now 2 regular blows are required to kill an opponent while 1 certainly will do him in. His story section plays out far differently than any other because of this and is easily the most frustrating as well.

It took a total of 4 hours to complete the story mode, well over half of that was spent trying to complete Benkei’s story. Having breezed through the first 3 characters stories in an average of 11 minutes each, I think was presented with Benkei. For a game built on the premise of the 1 hit kill, no longer being able to do so was rather jarring. Technically yes, a 1 hit kill was still possible with the heavy blow; However, fun fact, Benkei’s heavy blow seems to take longer to execute and has a seemingly shorter range than any other as well. While there where more than enough successful executions of the maneuver on my part, it certainly wasn’t a reliable part of his repertoire.

To make matters worse, this story also introduces fights that require even more hits. So one fight required 3 or 4 successful horizontal or vertical strikes and the final battle required 5 or 6. Apologies for being slightly vague in the numbers, but after most Benkei battles I was rather keen on forgetting what just happened and move on to the next one. The whole section stuck out like a sore thumb. Later stories did involve battles that required more than just one successful attack, but nothing on this scale, 2 at most. My first go around with Benkei lead to me retrying the final battle so many times that the game decided it had enough and wouldn’t let me hit continue. Probably for the best as the next day went much faster, but still far slower than any other chapter before or after. Is it took much for a monk to have a Bo?  If I’m having someone protect my sacred underworld rice then I reckon it’s probably not a huge ask to at least equip the guy with a stick.

Finally past having to use Benkei, the rest of the chapters resumed at their rather brisk pace as before, not quite as quick, but still probably only 15 minutes each at most. Perhaps the rather jarring change in what is required to win would have been more plausible as a final chapter/epilogue. It was far and away the most challenging of any character to play. Yes it was a difficulty spike, but it was an actual spike in that it also came right back down afterwards to nearly the same level as before once a weapon was again firmly in hand.  It just didn’t seem to fit with everything else. 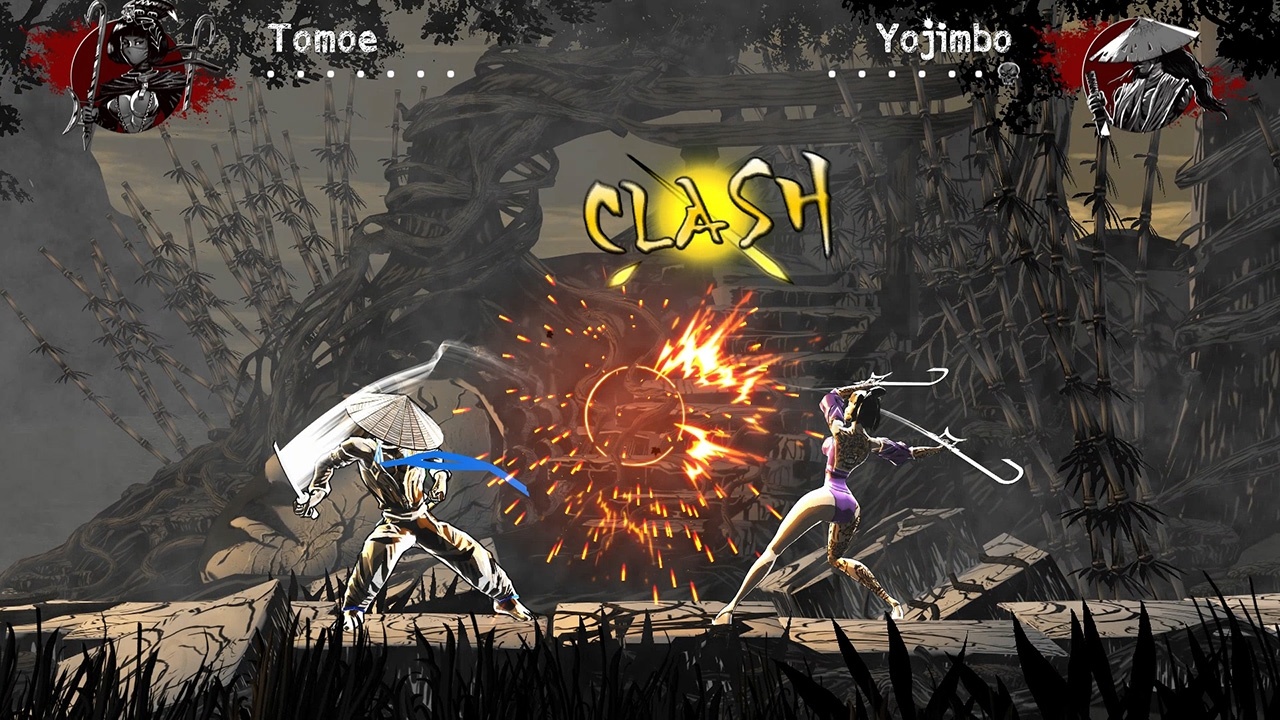 Controls are important, what about those?

When it comes to having tight and precise control over a character, fighting games are right up at the top with platformers. For the most part, the controls were very responsive, extra important since timing is such a large part of Slice, Dice and Rice. The only real issue I found was with the parry. Yes, it is a true parry and not a block, so holding the button down won’t do any good. Timing with it is key. While not discounting the notion of “user error” I noticed that many times, when up in each others personal space, the parry didn’t seem to work. They weren’t heavy blows, but because we were so close it was hard to see exactly what was happening. Was I too late? It couldn’t possibly have been too early being that close together, that would have been seen.

While there are some common culprits, like say input lag, I cannot be entirely certain the exact cause. I will say this however, I have noticed a particular set of circumstances in other Unity based games in which button presses aren’t registered either. Maybe a coincidence, maybe not. Whatever the reason though, it led to some distrust in using the parry and thus had the effect of altering my strategies.

Will there be blood?

Maybe a dash or two… just kidding, there’s lot of it. Slice, Dice and Rice supports some truly fabulous looking art. All of which is of the hand drawn variety. It’s not all super gory either. Is there a right amount of blood, that is enough to be exciting, yet not so much as to seem completely overdone? Seems there is and Slice, Dice and Rice nails that portion of the program. The locations are also done incredibly well. I could continue with the superlatives for some time, but let’s just wrap it up and say that is it really is A+ work.

So what’s the verdict then?

If you’re keen on the idea that one-hit can kill, it is a job well done for the most part. Just that one odd character, but that can be trudged through and forgotten once done with, even if it did consume half my total play time. Will it scratch that Bushido Blade itch? Depends, again if it is simply the idea of a more tactical combat, then yes. How this game will come off to someone unfamiliar with that style is a bit of an unknown however. Slice, Dice and Rice is probably a more brutal introduction to that kind of gameplay, yet at the same time, felt rather easy in places by comparison. While I was happy hacking my way through nearly everything, it’s not hard to imagine someone coming into this without any other reference to past games possibly finding it utterly maddening. There is however a nugget of wisdom to be gleaned from one of the games load screens…