Have you heard the fable of the Tortoise and the Hare? Wherein they were both archaeologists, cursed by a long dead Pharaoh, travelling Egypt to find seven grails in seven days. Wait, not that one? Well, maybe you should have. 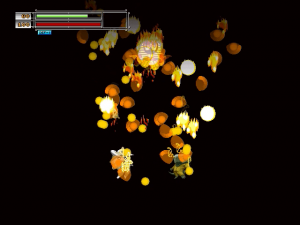 Krobon Station’s Pharaoh Rebirth+ snuck on to Steam last month, courtesy of Degica, it brought with it concentrated platformer gameplay with the ability unlocks of a metroidvania, but spread across multiple, replayable levels. It’s certainly a strange beast, but it’s one which seems to have whispered, when it could have confidently roared.

Through the game you play as one of two characters, levels permitting, Dr Jonathan Banfield and Andre Betancourt a former double-act of archaeologist-cum-explorers who have had their human forms stolen from them by a curse which has changed their bodies into that of a rabbit and tortoise respectively.

As the game starts the two of them are at odds as a result of this, the two having fallen out over the event which Jonathan repeatedly places at the blame of Andre. However, come the end of the first level, which serves as a mild paced tutorial, the two are lumped back together again, the victims of another curse, this one slightly less immediate, but a lot more deadly. The duo have seven days to recover seven artifacts in order to survive the, deadly, curse of Sehur I. 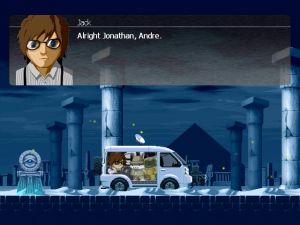 You’re probably thinking one of two things right now; surely they would have just called him Sehur if he was the first, you can’t really assume there’s going to be a successor at some point in the future when you’re the first of anything; or, well, this is just weird, Pharaoh’s, rabbits, tortoises, what kind of setting is this anyway?

The setting is actually -for a platformer- reasonably grounded. Should you ignore the fact that the two characters mostly on screen have been transformed into animals (okay, I know that’s a stupid request) then the story, with its race across Egypt, mysterious villain, meddling millionaires and government agencies, is actually perfectly viable as one of the great pulpy action movies my generation watched growing up.

The game is very aware of this, and as such is loaded up with referential humour, both to the setting and the transmogrified forms of the lead characters – as the only two people in the world in animal form. There’s even quite a few comedic call backs in the game which break up the platforming with story. While the setting is pulping, the game written with humour, and the genre a platformer the developers have put a little bit of story into each of the levels, and there’s a mini briefing and debriefing between the characters at the end of each level as well. It’s exceptionally well written, and not something I expected from the game. 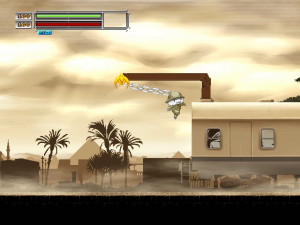 The transmogrification is important as well because of the abilities it has given Dr Banfield, for a start his hilariously oversized ears can now be used as a whip, or even in a windmill fashion to destroy projectiles – this only gets more ludicrous as the game goes on with certain pick-ups/upgrades essential to completing the game adding new abilities. The new abilities include, among others, the ability to use Jonathan’s ears as a grapple to swing from hoops, or the ability to… turn his ears into a para-glider shape in order to glide from jumps.

All of the abilities, and the areas are extremely well detailed and well implemented. While the game is primarily set in one location, that location -Egypt- is wide and varied enough, with its abandoned train stations, mines, and underground temples, that the visuals of the game never left me bored once. Another thing exceptionally well animated was the bosses, with most levels having a minimum of two spread throughout the level, and some of them being complete screen hogs in the style of old.

The levels all have secrets, and areas hidden away behind the abilities you’ll later learn – ensuring that there’s always a good reason to return to earlier levels. Hidden throughout there’s the ability unlocking relics, but there’s also relics which give you permanent stat boosts, as well as collectibles which are… simply collectibles with no effect. 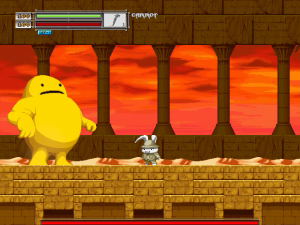 There’s also single use items dotted around the game which can be found as well. They’re a bit OP, but very hard to come by. A carrot will turn you into a hyper, deadly death machine. I used it to completely deck two of the early bosses with no fuss. There is a problem with some of the items in that they don’t actually describe what they do – actually, none of them do. Things like the Claymore Mine are self explanatory, but I don’t know if Wine is going to give me back SP, HP, or turn me into a mental, deadly thing like the carrots did.

As if that wasn’t enough, there’s also subweapons, which use the SP gauge, this includes items like a familiar, a box of soot, a machine gun which fires tennis balls. These are extremely powerful, and are major game changers – they’re almost all completely all miss-able. This is great, however it does underline the fact that navigation in the game can be a bit tough at times.

Most of the collectibles are very hard to find, and there’s not really much direction in the game – nor a map showing the discovered areas, or even the percentage of items collected. On at least two of the levels I had to fully double back on myself to re walk the level, looking for hidden routes and turnings that I hadn’t taken before. This normally led off to  a chamber containing a new ability, which then led to be re-running the explored map to try and find the one specific element it allows you to get past. These bits were a tiny bit frustrating at times – and could have easily been remedied with a map showing explored routes.

My only real frustration, outside of the above lack of instruction, was the fact that there were a few points where the game should autosave where it doesn’t. There was an instance early on in the game where you defeat a guardian, this then triggers a minute long sequence, which then triggers another minute long sequence. You must then make a jump from a moving vehicle onto a train. I missed this, and laughed out loud at the fact it sent me all the way back before the boss. However, the second time I missed because I was still laughing – but, it wasn’t funny when it happened that time. There’s a few instances where the game could have benefited from fast-skipping text or sequences… or, just an autosave after bosses.

These small sticking points aside there’s absolutely no weaknesses in the game – the music, animation and design of the game is fantastic, the game moves along at an exceptional pace, and the enemy positioning (and the hit-boxes) leaves nothing to be desired.

If you’re looking for a solid platform title to burn away more than a few hours, give Pharaoh Rebirth+ a go.