Order of Battle: Pacific, successfully covered a theater of war rarely covered – the Pacific battles of WWII. Following a free, full-conversion mod to add the Battle of Britain to the game the developers have now released the first paid DLC, and like the core game it covers an area rarely, if ever, touched in war games.

Morning Sun covers the Second Sino-Japanese War. It’s a historic war rarely taught in the West, mainly due to it being dwarfed by the Second World War which erupted a few years into the conflict. 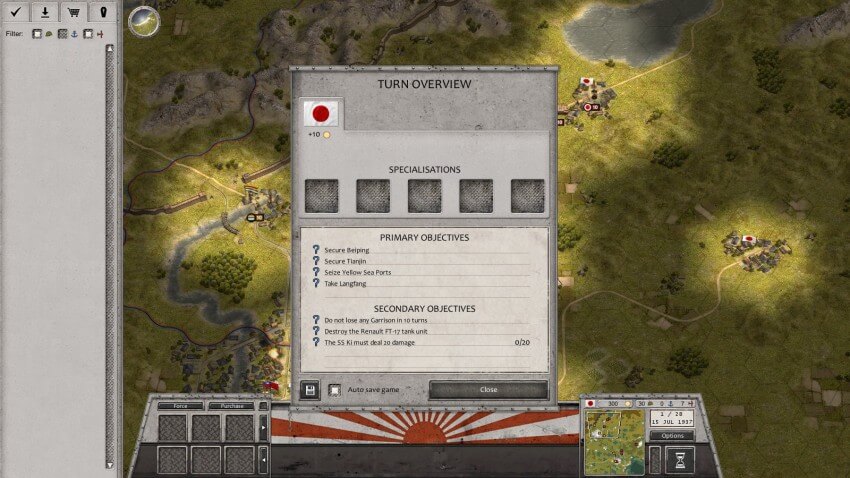 1931 saw Japan begin their movements onto the Chinese mainland as they attempted to turn Manchuria into a buffer state against Russian Ukraine, Japan had the advantage of massively superior technology versus Communist China, who had only recently started recovering from a brutal civil war.

In 1937 after several ‘incidents’ open war erupted, with the Japanese starting  aggressive expansion into mainland China – something that not long before would have been thought impossible. China played a careful practice of land for time, using technology above their own production levels which had been bought in, and guerrilla warfare to slow the rapidly modernised, and disciplined Japanese forces. These are the events covered in Order of Battle: Morning Sun.

Firstly, something should definitely be made clear regarding this content. It only follows the Japanese forces. The core game’s strengths are it’s variety of units, maintenance of supply lines, and management of flanking, these mechanics actually work towards better relating the Japanese forces’ struggles. What this means is that, even though you can only play as one force, you’re actually playing what was, on a tactical level, the tougher battle. (Even if not the right side)

Superior damage, and technology is all well and good, but with the core game’s  supply-line system in place, and greater distances to travel to secure objectives you’ll be stretching your troops thinner in order to ensure your troop’s supplies aren’t cut. As well as this, the AI is almost always positioned in a better defensive position, one that you’re pushing up against with your diminishing troop levels. You’re playing an invading force, having to rapidly cover ground to ensure momentum.

Just under 100 new units have been added to the game, with the majority being the allied supplied vehicles and armaments of the Chinese, however the Japanese do see several new units added also. Horses are also added to the game, something worthy of note as I move onto my next point.

Morning Sun does a fantastic job of capturing the setting and era over it’s 11 scenarios. The dismissal of horses in combat, as well as the stripping of dress wear on the battlefield, and it’s replacement with camouflage, were all critical points of note in the modernising of the major powers following their conflicts in The Great War. A less studious developer may have quickly ported over several features of the core system, and not paid attention to matters like this, focusing instead on other elements.

That’s the thing, the content of the game is of a high enough quality, and the content matter so specific, and new to the genre, that the DLC could have been released as a stand alone title. Strengths of the core game are expanded upon well, with the earlier mentioned stretching of supply lines, and new units changing the game into one of delicate pushes forward.

Oh – and there’s also construction units who can build airfields, allowing your planes to resupply and continue supporting your troops as they push up – and this is something which is supported in the in game editor.

If you enjoyed the core game, picking up Morning Sun is a complete no-brainer, and while it is a little strange that they haven’t included a Chinese campaign, the content that is included in this pack is well worth the price of admission.