The Polaris Sector was seen as a beacon of hope for the empires of space, a place of untold potential and resources. Instead, it is a place of death, defeat, and dissent for all but the most careful administrator.

Polaris Sector is certainly something new. It breaks a lot of the 4X Space genre’s conventions and mechanics, rebuilding them into a sleeker, if more unforgiving, title. As a matter of fact, each of the core elements of the genre are shaken up in several ways, in the least through a streamlining of micromanagement, which I’ll cover below.

Exploration is a case of moving ships into systems, each ship has a fuel level which limits its flight, this is the only thing really restricting your growth in the first few years of the game. As you reach a new star system it becomes click-able and you can see the planets within the system. Most planet types need terraform technologies, and so the start of the game is a rush to grab the inhabitable ones in order to draw up your territory lines for the later game.

It’s a simple click to send your ships from star to star, and the speed timer (X0 -> X20) means you can get this stage under way quickly. 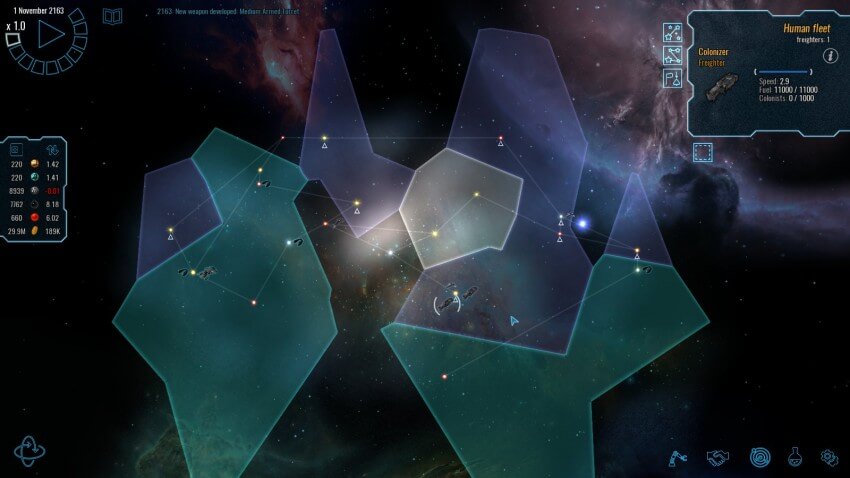 Expansion is a case of getting a colony ship out to a place you want to own before the other factions do. To make this process even more simple you aren’t required to queue up creation of colony ships – you can automate this process by simply clicking on the desired planet and clicking “Order Colonisation” – this will take you to a screen where you can select a management style, but we’ll discuss that in eXploit.

Faction borders are drawn out to show the stars controlled by certain factions. In time, with uprisings, sieges, and rebellions, that’s sure to change a lot throughout the game. 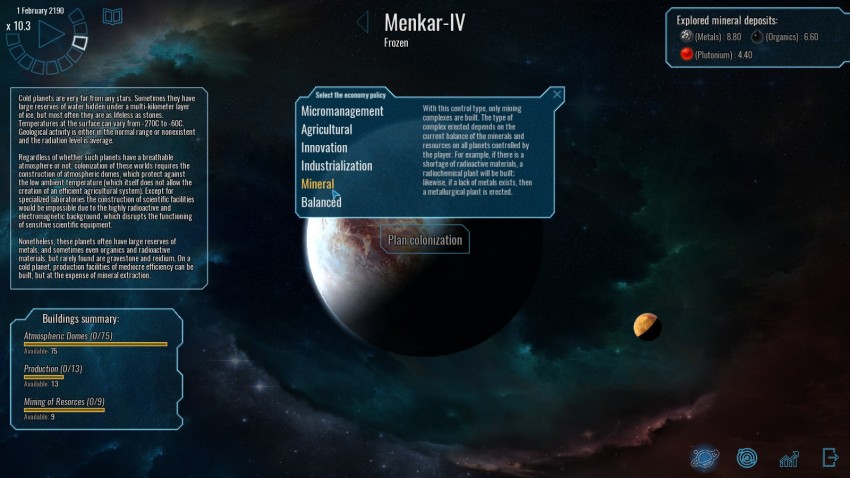 Colony development is another feature that you can have run on automatic if you so wish. When you first colonise a planet you are given an option to choose it’s focus, these focuses pertain to the type of industry the planet will specialise in, but there’s also an option to do it manually.

Depending on the planet type it will be better at certain things than others, for instance Earthlike, or Forest, planets are going to be better at food production, while craggy, rock, planets are going to be better for mining. You can work against these if you wish – building different facilities on the surface – this is useful if your empire is massively lacking in a certain area, and you haven’t learnt the ability to terraform other planet types. 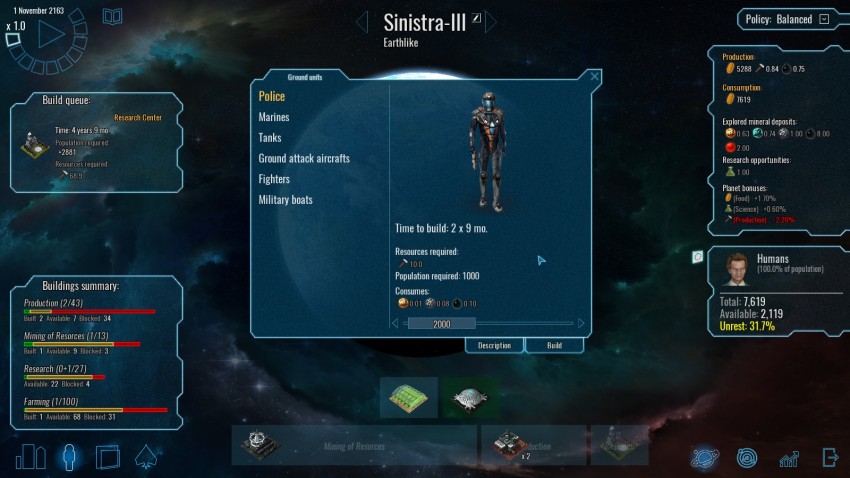 One thing definitely worth stating is that colony management doesn’t end there, you can build ground forces on each planet, including police to maintain the colony – this becomes especially important as you start growing as unhappy planets will riot and declare independence from you if they are not happy. This can also be managed through other means, policies, etc – but there’s nothing wrong with a little police state.

Resources aren’t infinite either, and if you’re not careful then you’ll hit a wall in your creations as you’ve gotten over ambitious with your designs. This, among other features, are where the learning curve completely rockets away, as the core gameplay isn’t of following a select structure, but of expanding under your own strategy. 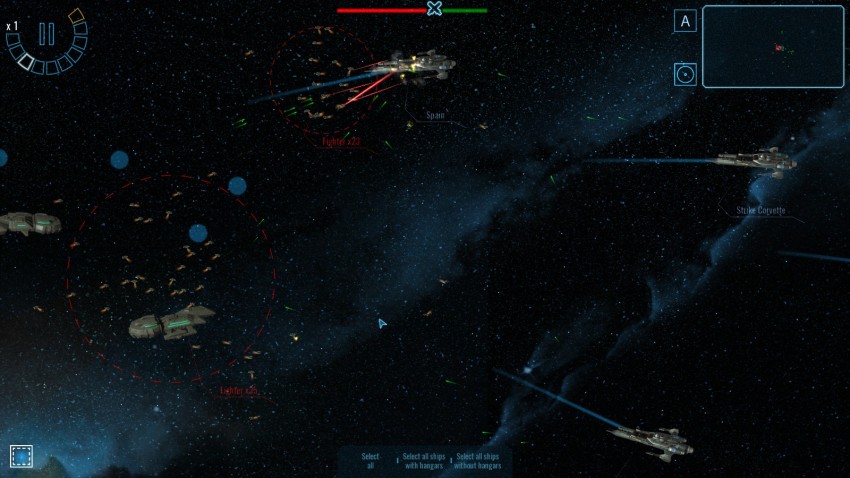 Conflict in Polaris Sector takes place in several different ways. Aerial bombardment and ground sieges make up the conflicts that you can see from the main, system view. Ship combat, however, takes place within it’s own view, and thanks to other great mechanic the game has introduced, it’s absolutely fantastic.

You see, every ship in the game follows a blueprint. The core blueprints are rather plain, but, you can make your own.

That’s right, you can kit our your own ships.

The game features a multi-leveled ship design system. Depending on the ship size you pick you can prepare blueprints for ships of a massive variety, loading some up with cargo holds for colonisation – or carrying wings of fighters into combat, loading others up with masses of laser weapons so you can use the ship as torpedo defences in large scale combat.

There’s a ridiculous amount of customising that can be done on the ships, and that only gets better as you further your technologies to unlock new weapons, engines, and generators.

As such, as you can surely imagine, ship combat is absolutely fantastic. Wings of small scale fighters swarming larg
er ships, evading their defenses as they pepper away at the weak spots. Meanwhile large battle cruisers fire mighty cannons into small ships, ripping away their hull in lethal moments. As this goes on your nippy, high power medium sized ships weave between the combat, lasers ripping enemy torpedo fighters to pieces before they can fire on your ships.

At least, that’s how it is once you’ve gotten the hang of it, as with any game of this ilk you’ll probably spend the first few games with ships abandoned out on distant stars, cities locked in riots, and resources dwindled to nil. It’s unforgiving for sure, and the free form design, expansion and technology systems of the game leave little direction for the new player – but once you’ve started to get used to the systems it’s absolutely fantastic. 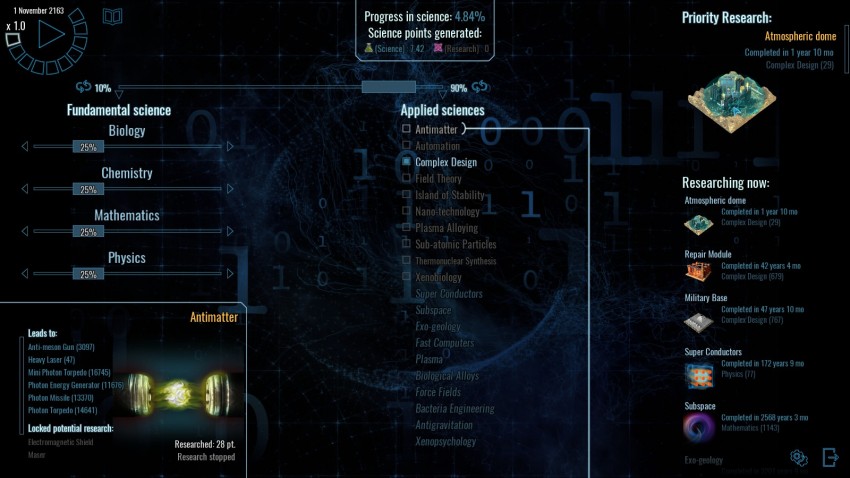 Technology deserves it’s own header here, because the way the game handles this integral part of any 4X game is fantastic.

Technology points are accrued through your colonies, those with science labs in quantity obviously adding more to the pot. However, that is then divided between Fundamental, or Applied science.

Fundamental Science is exactly what it sounds like, your scientists work in generalised fields (which you can also alter focus on) such as physics. Research into each of these fields will unlock technological ideas, and assist development in those fields.

Applied Sciences are other divisions of research you can focus on, this is when you select a scientific field to focus on – for example xenobiology.

As you accrue research credits in these they work towards unlocking the actual technologies of the game – certain hull upgrades, the ability to settle on different planet types. And, I must say, it feels a lot more logical to have the game’s unlocks in this format than in a technology tree, or web.

You can also, if you so wish, click on a specific unlock you would like your researchers to focus on, and the scientists will do just that, shifting the focus on the Fundamental and Applied sciences as to expedite the research of your desired tech. 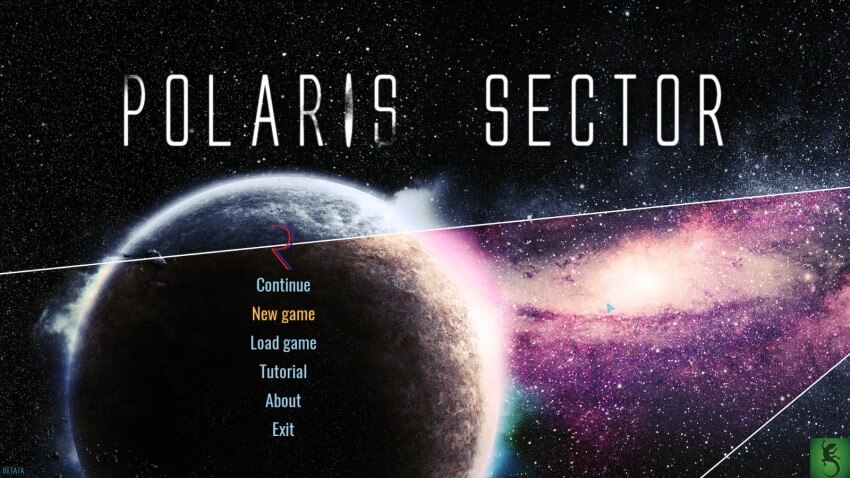 The above mechanics already make for a fantastic mix, however when you combine that with the fact that there is a trade/relations system for the different groups, an espionage system which allows you to divert enemies, and that each game can be generated from 20 to 900 stars, in a variety of layouts… there’s a massive amount of game here which can be enjoyed by any veteran of the 4X genre.

There’s a few areas I would like to see
developed with the title in future, ideally something which shows that you are over assigning materials to projects, to make you aware well before it becomes a problem. Also, my penchant for military strategy would like to see combat in asteroid fields, or space wrecks, certainly more objects which would add more of a requirement for tactical, environmental awareness to the combat.

Outside of these points though, I’m really looking forward to watching this fantastic title develop and succeed.