Midboss is all about rising through the monster ranks. Except instead of hard work and dedication, you brutally kill your way to the top.

To be fair it does also take hard work and dedication to kill your way to the top. It also makes the company potlucks very awkward.

It was back in March of 2015 when I first heard about Midboss. I was riding high on the Roguelike express. I was fascinated when I first laid my eyes on Midboss and knew I had to play this game. The idea of possessing your enemies body once defeated was brilliant. Lucky for me, Kitsune Games honored with me a chance to check out their game. It still had a bit to go, but was very enjoyable. Roguelikes were becoming my favorite genre and I couldn’t get enough. 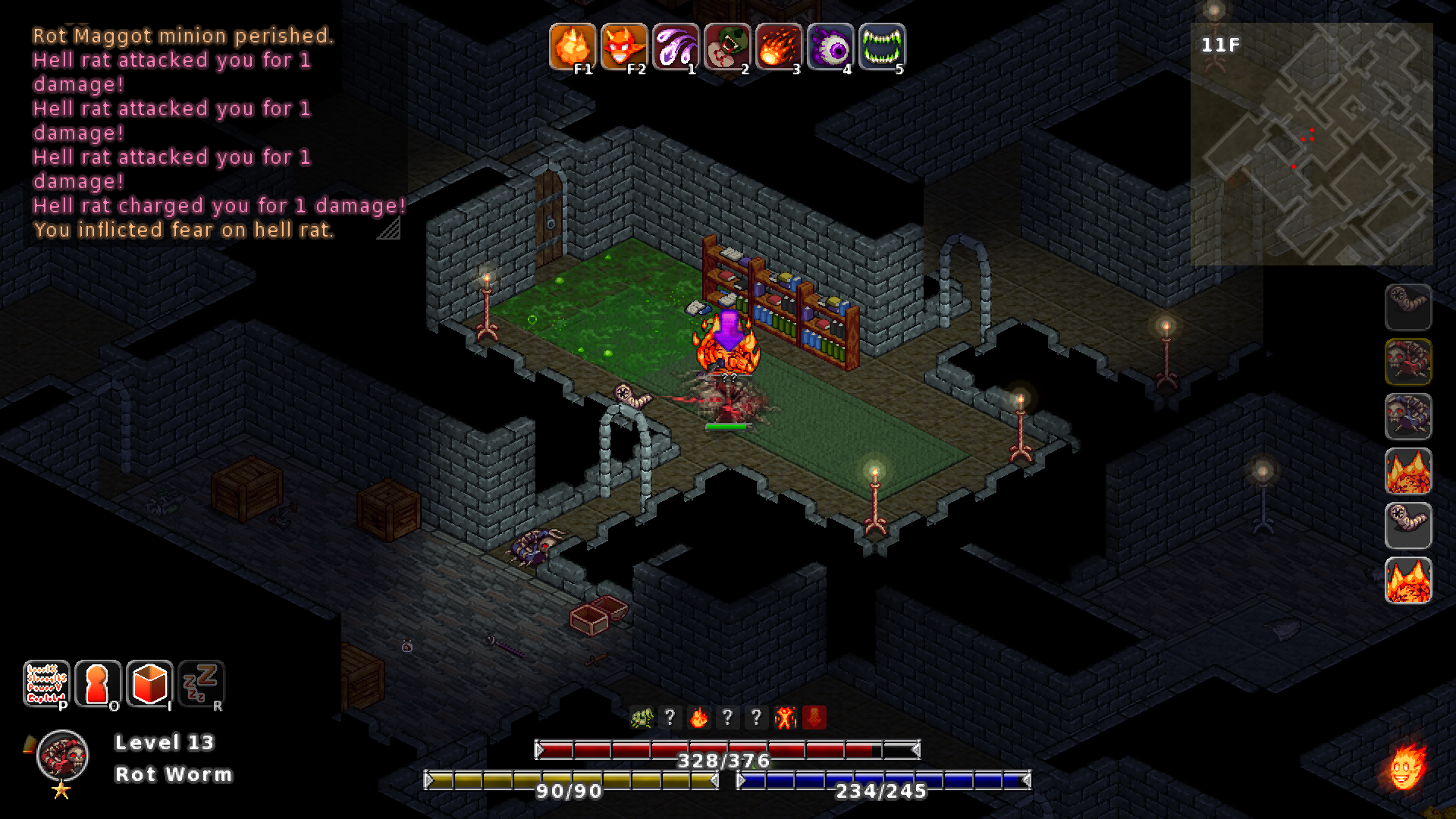 Fast forward and now its 2017 and finally Midboss is complete. I am older, wiser, and little bit more cynical. The same could be said for Midboss. The game has changed in many ways, adding death cards and way more customization features. Overall Midboss is as enjoyable as it was back then. So what has come about of two years of development? Let’s dig in.

Midboss is more your traditional Roguelike than I expected.

If you have ever played Dungeons of Dredmore, Rogue Wizards, or Crypt of the Necrodancer then you more or less know what I am talking about. If you haven’t, then allow me to give you a brief summary. Midboss is a Roguelike randomized, perma-death game with an isometric view. You start off with basically nothing and build yourself up little by little. If you die it’s back to square one and start over. It’s not going to be every ones cup o’tea but anybody with eyeballs can you tell you the popularity of the genre has skyrocketed and never looked back. 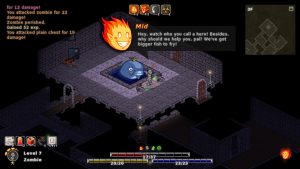 There are many core familiar aspects in Midboss such as unidentified potions, cursed items, and randomized level design/items. You may find in the first area an epic item that will carry you deep into the game. Other times you will drink a funny looking potion and drop dead. True story.

What separates Midboss from the rest of the pack is its theme and progression. You start off as lowly Rat and make up your way to more standard RPG foes. Skeletons, Zombies, and Warlocks oh my!

As you become your foe you gain their abilities and eventually can even master that form. Carrying their abilities into whatever you possess next. Each monster does have its strengths and weaknesses mind you. Some are casters and some do best in melee combat. Knowing what to possess and when is tricky, as it can lead to a quick death.

Switching from a Minitaur to a caster monster isn’t going to work well, especially if all your gear is focused on boosting melee attacks, savvy? Play smart and you’re bound to do well, if you possess without much thought you’re going to regret it. As its main feature the progression system is fantastic and fun. I was always on the lookout for something new to possess and play around with. One minor gripe I did have was that anything with healing/regenerative abilities or spells had an edge. Matter of fact it became a down right necessity in later levels to use Vampiric bite to survive. Health potions are rare and sometimes unidentified.

All is not lost as Midboss also has a unique feature in Death cards. With these cards you can gather one piece of useful loot from your previous run. You can also upload other peoples Death cards. Allowing you to bring that awesome weapon and more into the next session. While optional, I found this to be a really neat feature and very unique.

So lets talk about, “The imp in the details” as it were. 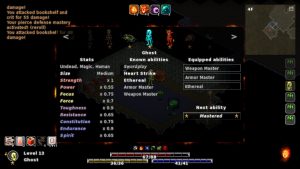 One thing that Midboss really doesn’t set up much is its universe. You play as a lowly Imp who is picked on by his fellow monsters. You have a pet flame named Mid who serves as your evil Jiminy cricket. Beyond that not much else is given far as details go. There is talking Cat/shop keeper and the Troupple King(Cratefish King) from Shovel Knight makes a cameo appearance.

The gameplay itself is rather simplistic but has layers of complexity. You have a levelling system for both your form and base stats. You can choose between four attributes that raise the usual RPG standbys like crit, defense, attack, etc. The entire keyboard layout is rebindable but doesn’t need it. The game is smoothly designed in the way it works. Spells are slotted to numbers and movement can be done with the mouse or number pad.

You walk into enemies to physically attack them and collect loot by clicking on it. Clicking on loot can be a bit bothersome at times but eventually you learn to ignore anything that isn’t helpful. The menus themselves are easy to traverse and understand with helpful pop ups. I found item management to slow down my experience.

Back in 2015 I felt the game was rather bare. All of the dungeons were empty. 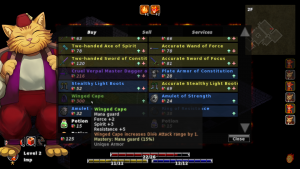 That has certainly changed as the game now has crates, chests, and all sorts of environmental destructible stuff. The aesthetic itself hasn’t really changed that much in two years. There are some nice moments with dialogue but the game has stuck to its core style when it comes to overall design. There is quite a bit of polish on overall magic effects. Magic Missile is by far my favorite spell to cast in this game and you really feel each impact.

While I absolutely felt that jamming the dungeon full of stuff really gives it more life, it also makes it incredibly tedious to loot at times. Cratefish boxes are abundant and, while optional, help you gain loot as you free more of them for the Cratefish King. There are also bookcases, treasure chests, and armor racks. If you are obsessive like me and hate leaving loot on the floor then take my advice, Ignore it! There is far too much stuff to collect at times and it will slow you down massively. 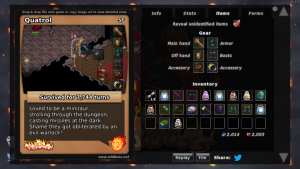 Like I mentioned earlier, Midboss is a far more traditional roguelike then most. The level design, graphics, and menus hold true to this. While I can appreciate it, the game does have a retro vibe. This is further showcased by random potions that change the color scheme of the game to old gameboy colors, pen and paper and more. Character design is top notch and I really loved the sprites. There are no color swaps when it comes to enemies but the Imp does change color to represent your multi-monster form. Being a flaming red Minotaur is very cool.

In all while the graphics are retro, they don’t hold the game back in any kind of way. I would’ve of course like to have seen more but hey that is what a sequel is for.

Midboss has a ridiculous amount of replay value. You can play this game as hard as you want or as easy as you want.

One big difference from my previous experiences is that Midboss gives you quite a bit of control. Quick games give you a bite sized version of the game that can be enjoyed quickly. You can also use Custom games to make or break the rules of the game. Want a humongous dungeon per level? Easy. Want all items identified and no curses? Done! 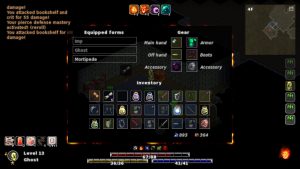 Aside from that, the game itself lends itself to multiple play sessions. You may try out an Acidic Zombie or a Ghost Warlock to change things up. There are many different ways to tackle the game with all sorts of different tactics and items. Speaking of items, I never really ran into the same items over and over. They did have similar stats but usually had something different to make them useful in some shape or form.

Even if you alter everything to be super easy, the game is still very challenging in deeper sections where every stat point matters.

Depending on what you choose the game can take a while to beat and some of the dungeons can be quite extensive and full of loot. Maybe you are looking for a shorter version than even quickplay has to offer. Midboss puts all the decisions in your hands as far as time investment goes. As someone with a full schedule I appreciated this very much.

Midboss is devilishly fun and a unique experience.

I enjoyed all the changes that have been made in the last two years to Midboss. The music and sound effects all play their own part in bringing the game together in fun ways. Midboss also has some really neat and innovative ideas that I haven’t seen explored in other Roguelikes. On the other hand Midboss does feel like a blast from the past. I hope that Midboss finds its core audience.

So if you are looking for a traditional roguelike where you play the monsters and kill monsters then pick up Midboss for $14.99/£10.99.